“Hey Jude” is a song by the English rock band The Beatles and was written by Paul McCartney. It was first released in August 1968 under The Beatles label ‘Apple Records’. Hey Jude runs for 7mins and 11secs and at the time of release was the longest single to top the British charts. The song is said to have evolved from “hey Jules”, a song that had been written as a ballad to comfort Lennon’s son Julian during his parents’ divorce.

McCartney said, “I started with the idea ‘Hey Jules,’ which was Julian, don’t make it bad, take a sad song and make it better. Hey, try and deal with this terrible thing. I knew it was not going to be easy for him. I always feel sorry for kids in divorces … I had the idea [for the song] by the time I got there. I changed it to ‘Jude’ because I thought that sounded a bit better.”

The genre of the song is Rock, Pop played in ballad style.

The song structure is not your usual pop structure i.e. Verse, chorus, verse, chorus, bridge, chorus, chorus but instead is quite unorthodox in nature for its genre. The song relies more on the subtleness of texture then of the form.

The structure is as follows

Verse 1 as with all the versus follows a simple chord progression using chords I, V, V7, V7sus4 and IV in the key of Fmajor.

The vocal never really rests on any unstable tones for too long during the versus, instead only passing on the unstable tones and then quickly resolving back to the diatonic key. The first verse is minimalistic , using only piano with a solo vocal melody line that sets the tone for the song.

In verse 2 we hear the addition of a tambourine being played on the offbeat and also an acoustic rhythm guitar. There is also backing vocals added in the second half of the verse in the form of simple “ahhhh’s”. It is the same as the first verse, The harmony is purely diatonic to F Major and the melody rises and falls in even measure leaving the listener feeling at ease. This is however broken at the end of this verse as there is one bar added. Harmonically to do this the final verse chord is turned into a V/IV allowing the chordal structure to smoothly transition from verse to bridge.

As a result of the verse having a bar added to the end, the first phrase of both bridges have 5 bars thus mimicking the lead in from verse to bridge making the song stable again. Harmonically the start and the end of both bridges tonally are quite unstable. The bridge is an unusual 11 and a half measures long and sees the introduction of a walking Bass line and drums with emphasis on tapping cymbals. Melodically the main vocal tends to fall throughout the most part of the bridge, barely rising until the major melody swell that leads to the next verse.

Verse 3 has the addition of backing vocals in thirds. There is also the introduction of a stray backing vocal as well. The stray vocal “so let it out and let it in” leads into the lyrical ideas found in the next bridge. The tambourine in this verse is more frequent and played now as semi-quavers.

Bridge 2: Bridge 2 mirrors bridge 1 harmonically and musically with only slight variance in lyrics and slightly more ornate lead vocals with more passing notes but still sticking to the diatonic Fmajor the majority of the time..

In verse 4 there is a vocal ornamentation of the initial “Hey Jude” phrase, and there is harmonizing backing vocals sung in parallel thirds all the way through this verse. There is also a spectacular vocal flourish (“better, better, …”) which leads to the jam section and outro.

In the outro, the use of the flat-VII chord gives the jam session a modal, Mixolydian feel that contrasts the first half of the song.The outro is a staggering 72 bars long yet does not feel like it is, as the momentum and instrumentation through this section swells and leaves the listener engaged. Instruments are gradually added to this section creating a thickness to the sound. There is a doubling of the bass line which is layered progressively over the course of multiple repetitions of the vocal line “nah nah nah nah…”.These backing vocals at times works alongside the E flat chord to create a dissonant 9th.

This mantra like phrase continues repetitively throughout the 72 bar outro. At repeat 4 you can hear the inclusion of mid range strings, a couple of octaves above the bass you can hear trumpets, the trumpets enable a sense of grandeur to the outro and help this section keep its momentum and interest. In the 8th repeat the violins rise and swell 4 octaves above the Bass line and the vocal ad lib becomes more frantic in nature and supplies the listener with a sense of almost panic and urgency as the song fades out.

This song relies heavily on delicate contrasts throughout the beginning half and during the 2nd half, the song relies more on big tones, layering of instruments and stacked harmonies both on beat and off beat. The song, starting with the thin sounds of just a lone leading vocal, and simple piano chords, allows a gentle introduction to the ballad. Throughout the track slight variance in lyrical content and instrumentation gives the listener a sense of repetition and contrast at the same time and any melodic dissonance to be found there is consistently resolved. This allows the outro to have the full impact needed to leave the listener engaged as it swells to its fantastic conclusion. 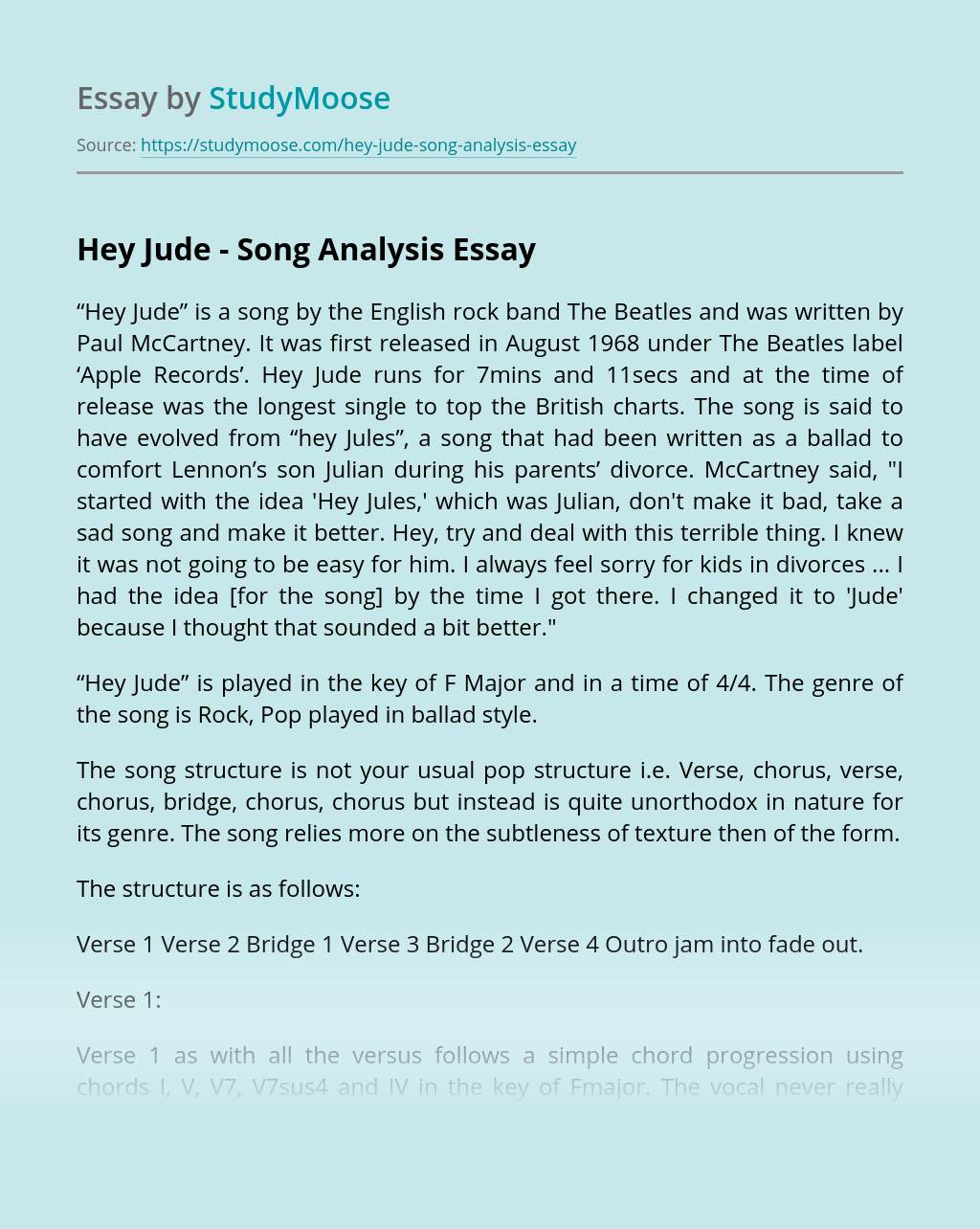