the Period of Imitation

1919 – UP College Folio
1920 – Bulletin, Philippine Herald
1924 – The Philippine Review, the Independent, Rising Philippines and Citizens, and the Philippine Education Magazine.

By 1919, the UP College Folio published the literary compositions of the first Filipino writers in English. They were the pioneers in short story writing. They were then groping their way into imitating American and British models which resulted in a stilted, artificial and unnatural style, lacking vitality and spontaneity. Their models included Longfellow and Hawthorne, Emerson and Thoreau, Wordsworth and Tennyson, Thackeray and Macaulay, Longfellow, Allan Poe, Irving and other American writers of the Romantic School.

The noted essayists of this time were: Carlos P. Romulo, Jorge C. Bocobo, Mauro Mendez, and Vicente Hilario. Their essays were truly scholarly characterized by sobriety, substance and structure.

They excelled in the serious essay, especially the editorial type. The next group of writers introduced the informal essay, criticism and the journalistic column. They spiced their work with humor, wit and satire. These group included Ignacio Manlapaz, Godefredo Rivera, Federico Mangahas, Francisco B. Icasiano, Salvador P. Lopez, Jose Lansang and Amando G. Dayrit. SHORT STORIES In the field of short stories, DEAD STARS by Paz Marquez Benitez written in the early 1920’s stand out as a model of perfection in character delineation, local color, plot and message.

During the first year of the American period, the languages used in writing were Spanish and Tagalog and the dialects of the different regions, but Spanish and Tagalog predominated. In 1910, a new group started to write in English. Hence, Spanish, Tagalog, the Vernaculars and finally, English, were the mediums used in literature during these times. While the three groups were one in their ideas and spirit, they differed in their methods of reporting. The writers in Spanish were wont to write on nationalism like honoring Rizal and other heroes. The writers in Tagalog continued in their lamentations on the conditions of the country and their attempts to arouse love for one’s native tongue. The writers in English imitated the themes and methods of the Americans.

A. Literature in Spanish

The inspiration of our Filipino writers in Spanish was Rizal not only because of his being a national leader but also because of his novels NOLI and FILI. These two novels contained the best qualities of a novel ever written, in English or in Filipino. Those who were inspired to write in praise of him were Cecilio Apostol, Fernando Ma. Guerrero, Jesus Balmori, Manuel Bernabe and Claro M. Recto. CECILIO APOSTOL Cecilio Apostol wrote poems dedicated to Rizal, Jacinto, Mabini and all other heroes but his poem dedicated to Rizal is considered the best poem in praise of the hero of Bagumbayan. FERNANDO MA. GUERRERO It is believed that Fernando Ma. Guerrero shared with Apostol the reign in the balagtasan in Spanish during their time. He also dedicated a poem to Rizal but he collected the best of his poems in a book called CRISALIDAS, meaning, a kind of black, wooly caterpillar. Here are a few stanzas of his call to Rizal which he wrote on June 19, 1901 to commemorate Rizal’s birthday.

JESUS BALMORI Jesus Balmori is well-known for his pen name of Batikuling. He and Manuel Bernabe participated in a debate on the topic – (Remembrance and Forgetfulness). He was elected Poet Laureate in Spanish besting Manuel Bernabe. MANUEL BERNABE Manuel Bernabe is a lyric poet and the fierceness of his nationalistic spirit was unchanged in any topic he wrote about. In his debate with Balmori, he was more attractive to the public because of the modious words he used. He defended OLVIDO (Forgetfulness).

In nobility of speech and theme, Claro M. Recto can compare with the other writers of Spanish. He collected his poems in a book entitled BAJO LOS COCOTEROS (Under The Coconut Trees).

Other Writers in Spanish

1. Adelina Guerrea was the first woman poet in the Philippines who was good in Spanish. She obtained the Zobel prize in her song El Nido . (The Nest). 2. Isidro Marpori became famous for his four books entitled Aromas de Ensueño (Scents of Dreams). 3. Macario Adriatico wrote of a legend of Mindoro entitle La Punta de Salto (The Place of Origin). 4. Epifanio de los Santos (known as Don PAnyong). He was a good leader and biographer during the whole period of Spanish literature. 5. Pedro Aunario wrote the Decalogo del Proteccionismo. B. Filipino Literature FLORANTE AT LAURA of Francisco Balagtas and URBANA AT FELISA of Modesto de Castro became the inspiration of the Tagalog writers.

In the realm of short stories that started to appear in the column Pangsandaliang Libangan (Short-time Leisure) and Dagli (Fast) we find here the names of Lope K. Santos, Patricio Mariano, and Rosauro Almario. In the Liwayway Publications, we find Deogracias Rosario, Teodoro Gener, and Cirio H. Panganiban. Noted novelists or biographers were Valeriano Hernandez Peña, Lope K. Santos, Iñigo Ed. Regalado, Faustino Aguilar, etc. Here are the autobiographies of some of the writers mentioned:  LOPE K. SANTOS Lope K. Santos, a novelist, poet and author, and grammarian covered three periods of Tagalog literature – American, Japanese and the contemporary period. If Manuel L. Quezon is called the Father of the National Language, Lope K. Santos is called the Father of the National Language Grammar. He was also called the “Apo” of the Tagalog writers. BANAAG AT SIKAT was his masterpiece. JOSE CORAZON DE JESUS Jose Corazon de Jesus is very popularly known as Huseng Batute. He was also called the Poet of Love in his time. ANG ISANG PUNONG KAHOY (A TREE), an elegy, is believed to be his masterpiece.

Amado V. Hernandez was dubbed Makata ng mga Manggagawa (Poet of the Laborers) in our literature because he pictures in his poem the intense love for the poor worker or laborer. To him, a poem is a scent, bittersweet memories, and a murmur of flowing water. The pen is powerful and according to him, even a king can be bent by the pen. He contributed a lot of writings to literature like ISANG DIPANG LANGIT (A Stretch of Heaven), BAYANG MALAYA (A Free Nation), ANG PANDAY (The Blakcsmith), and MUNTING LUPA (A Small Plot), but his masterpiece is ANG PANDAY. VALERIANO HERNANDEZ PEÑA Together with Lope K. Santos he reached the summit of his novel-writing. He was known as Tandang Anong and his pen name was Kuntil Butil (Small Grain). He considers NENA AT NENENG his masterpiece.

Iñigo Ed. Regalado was a son of a popular writer during the Spanish time known as Odalger. He proved that he not only followed the footsteps of his father but also reached the peak of his success by the “sumpong” (whim) of his pen. He also became a popular story-teller, novelist and newspaperman.

During the advent of the American period, Severino Reyes and Hermogenes Ilagan started the movement against the moro-moro ( a play on the Spanish struggles against the Muslims) and struggled to show the people the values one can get from the zarzuela and the simple plays. The people one should not forget in the field of writing are the following: 1. Severino Reyes. Father of the Tagalog drama and author of the immortal WALANG SUGAT. 2. Aurelio Tolentino. The dramatist in whom the Kapampangans take pride. Included in his writings were LUHANG TAGALOG, his masterpiece, and KAHAPON, NGAYONG AT BUKAS that resulted in his incarceration. 3. Hermogenes Ilagan. Founded the group Campaña Ilagan that presented many dramas in Central Luzon. 4. Patricio Mariano. Wrote the novel NINAY and ANAK NG DAGAT (Son of the Sea), his masterpiece.

5. Julian Cruz Balmaceda. Wrote BUNGANGA NG PATING (Shark’s Mouth). This gave him much honor and fame. The Tagalog Short Story Two collections of Tagalog stories were published during the American Period. First was the MGA KUWENTONG GINTO (Golden Stories) published in 1936 and %) KUWENTONG GINTO ng 50 BATIKANG KUWENTISTA (50 Golden Stories by 50 Noted Storytellers) in 1939. The first was written by Alejandro Abadilla and Clodualdo del Mundo that contained the 25 best stories according to them. The second was written by Pedrito Reyes. PAROLANG GINTO (Golden Lantern) and TALAANG BUGHAW (Blue List) of Abadilla became popular during this period.

Almost all Tagalog writers during the American Period were able to compose beautiful poems which made it difficult to select the best. Even if poetry writing is as old as history, poetry still surfaces with its sweetness, beauty, and melody.

Other Forms of Literature

The following are those recognized in the field of Ilocano Literature: 1. Pedro Bukaneg. Father of Ilocano Literature. From his name was derived the word Bukanegan, which means Balagtasan (a poetic contest) in Ilocano. 2. Claro Caluya. Prince of Ilocano Poets. Known as poet and novelist. 3. Leon Pichay. Known as the best Bukanegero (from Bukaneg). Also a poet, novelist, short story writer, dramatist and essayist.

Literature of the Kapampangans

(Pampango Literature)
Two stalwarts in the literature of the Kapampangans stand out: they are: 1. Juan Crisostomo Soto. (Father of Kapampangan Literature). The word CRISOTAN (meaning Balagtasan) in Tagalog is taken from his name. 2. Aurelio Tolentino. He truly proved his being a Kaampangan in his translation of KAHAPON, NGAYON AT BUKAS into Kapampangan which he called NAPON, NGENI AT BUKAS.

The following are the top men in Visayan literature: 1. Eriberto Gumban. (Father of Visayan Literature). He wrote a zarzuela, moro-moro and a play in Visayan. 2. Magdalena Jalandoni. She devoted her talent to the novel. She wrote ANG MGA TUNUK SAN ISA CA BULACLAC. 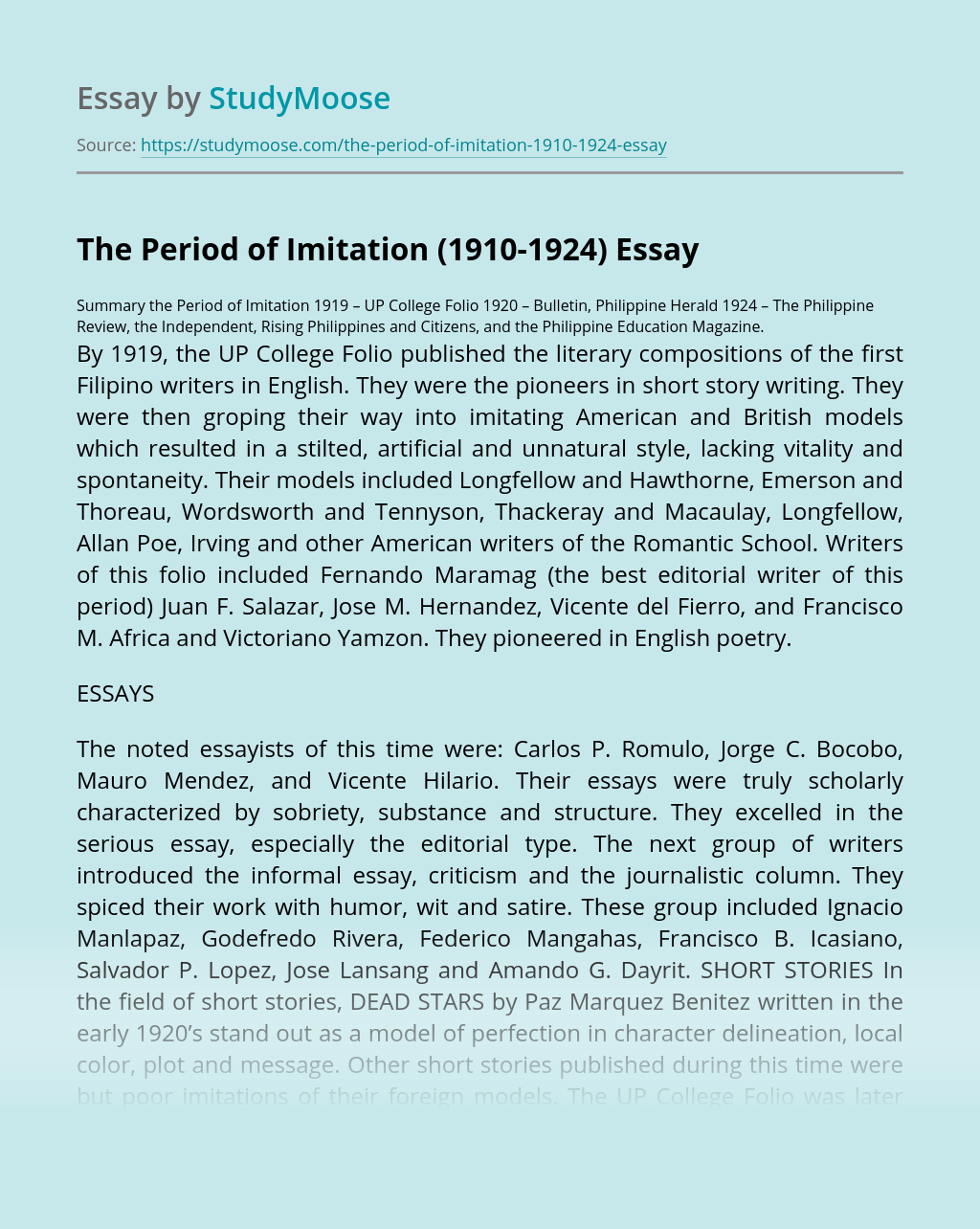 Don’t waste time
Get a verified writer to help you with The Period of Imitation (1910-1924)
Hire verified writer
$35.80 for a 2-page paper
Stay Safe, Stay Original