Woman Writers of the Romantic Period

Romanticism (also called Romantic Era or Romantic period) was a complex artistic, literary, and intellectual movement that originated in the second half of the 18th century in Europe, and developed in reaction to the Industrial Revolution. In part, it was a movement against various social and political norms and ideas of the Age of Enlightenment. It strongly influenced the visual arts, music, and literature, but it had impact on education and natural history as well. During this period, writers and poets were actively engaged in the creation of a new form of artistic expression.

Don't use plagiarized sources. Get your custom essay on
“ Woman Writers of the Romantic Period ”
Get custom paper
NEW! smart matching with writer

The objective of this type of expression was to celebrate intuition, rather than reason. It is believed that the greatest representatives of the period were men. Women writers of the time did not receive the same recognition as did their contemporaries-men writers. Women were supposed to be incapable of expressing emotions in writing. Indeed, it was a period where males still dominated most aspects of society, but women gradually became more active.

In the Romantic period, more women were writing poetry than ever before. There were a number of famous Romantic female writers in the Romantic era.

The most notable female writers include: Anna Laetitia Barbauld, Charlotte Turner Smith, Mary Robinson, Hannah More and Joanna Baillie. This essay will look closer to some of them. As poet, educator, essayist and critic, Anna Laetitia Aikin is considered to be one of the literary giants of her time. She was born on June 20th, 1743, in family of Jane Jennings and John Aikin, a Presbyterian minister and schoolteacher.

Her family lived near the village of Kibworth Harcourt, in Leicestershire. Anna was educated at home by her mother. She later convinced her father to teach her French and Italian, and even some Latin and Greek.

Anna never had close relationship with her mother, and she struggled against the puritanical restrictions her parents imposed. As she was brought up isolated form other children, she had it difficult to socialize with others even in her adulthood. In 1758 the family moved to Warrington where her father became a tutor at a newly founded academy. There was also Joseph Priestley, a colleague of Anna’s father, who became a close and lifelong friend of Anna. He is also believed to be one of those who encouraged her to write. As a result, in 1773, she published a book entitled Poems, which was vey successful.

In 1774 Anna Laetitia Aikin married Rochemont Barbauld, a French Huguenot refugee. Soon they moved to Palgrave, Suffolk. A number of her poems express the love and friendship that she had in their marriage. Together, the Barbaulds established a boarding school. They had no children of their own, therefore they adopted Anna’s brother’s son. Children had an important role in her. She wrote for volumes entitled Lessons for Children intended for children aged two to four. Anna published also her work Hymns in Prose for Children in 1781, as well as several other books on the education of small children.

The Hymns encourage children to love and celebrate God, and they are believed to have influenced William Blake’s Songs of Innocence and Songs of Experience. After giving up the boarding school, Anna’s writings were focused primarily on political and social matter, opposing the war against French and supporting freedom of religion. Unfortunately, Rochemont Barbauld became mentally ill and increasingly violent few years later. By January 1808, he had attacked Anna Barbauld, and the couple separated in March. On November 11, 1808, Rochemont drowned himself in the New River.

Anna wrote of her grief and loss in a memoir of her husband. Over next year she threw herself in editorial work. The last of Mrs. Barbauld’s published writings was Eighteen Hundred And Eleven, A Poem, published in 1812, in which she criticized the war between Britain and France. Anna continued to write, but did not attempt to publish further volumes of her work. Anna died on 9 March, 1825. Her niece, Lucy Aikin, published two collections of her works: The Works of Anna L?titia Barbauld, with a Memoir by Lucy Aikin (1825) and A Legacy for Young Ladies (1826).

A large collection of Anna Barbauld’s works was destroyed in the bombing of London in World War II. Anna Laetitia Barbaud was acclaimed for her genius and talent. Many writers admired her poetry. She often wrote of home, of children, and of her faith, but she did so in an individual voice. Her educational and political writing also reflects her independence of thought, and strength of conviction. Clearly, she deserves more credit than she has received these past one hundred and fifty years. Joanna Baillie is another notable woman writer of the Romantic era.

Walter Scott called Joanna Baillie “the best dramatic writer” in Britain “since the days of Shakespeare and Massinger” was a Scottish dramatist and poetess. She was famous during her lifetime, and her plays were very well-received. She was born in Bothwell, Lanarkshire on September 11, 1762, in the family of James Baillie and Dorothea Hunter. Joanna belonged to an old Scottish family, which claimed among its ancestors Sir William Wallace. Despite Joanna preferred playing in the garden and exploring the nature, she received an excellent education, and began very early to write poetry.

In 1769 the Baillies moved from Bothwell to Hamilton, South Lanarkshire and a few years later Joanna was sent to Glasgow to attend a boarding-school. In 1790, she published her first work Poems: Wherein it is Attempted to Describe Certain Views of Nature and of Rustic Manners. The book was barely noticed in the reviews. However she continued to write and in 1798 that she published anonymously the first volume of her “plays on the passions”, under the title A Series of Plays. She aimed to show the deepest and strongest passions of the human mind, such as hate, jealousy, fear, love, by a tragedy and a comedy.

Count Basil, and De Monfort, two of the three plays in this volume, were among the masterpieces of Mis Baillie’s career. The book gained success and was followed by next three volumes later. Her writings show remarkable powers of analysis and acute observation and are written in a pure and vigorous style. Joanna Baillie’s reputation does not rest entirely on her dramas; she was the author of some poems and songs of great beauty. The best of them are the Lines to Agnes Baillie on her Birthday, The Kitten, To a Child and some of her adaptations of Scottish songs. n 1840, Joanna Baillie published a volume of Fugitive Verses from earlier years. Miss Baillie died shortly afterwards on 23 February, 1851 at the age of 89, but her work continues to live on. Her gentleness and sweetness of disposition made her a universal favourite, and her little cottage at Hampstead was the centre of a brilliant literary society. Only in the late twentieth century critics began to recognize her role in psycholoanalytical depictions of the human psyche that have influenced Romantic literature.

Scholars now recognize her importance as an innovator on the stage and as a dramatic theorist, and critics and literary historians of the Romantic period concerned with reassessing the place of women writers are acknowledging her significance. Mary Wollstonecraft Shelley was a British novelist, short story writer, dramatist, essayist, biographer, and travel writer. However the world knows her for the Gothic horror novel Frankenstein: or, The Modern Prometheus (1818). Mary Wollstonecraft Godwin was born on 30 August 1797 in London,

England, the second daughter of Mary Wollstonecraft (1759-1797and William Godwin. Mary’s mother died soon after her birth and she and her half sister Fanny gained a stepsister, Claire, when her father remarried Mary Jane Clairmont. Claire and Mary were close during their lives. Mary was educated at home by tutors were she studied her parent’s writings and literature and poetry, as well as learned Latin, French, and Italian. When she was around sixteen years old, Mary met her future husband Percy Bysshe Shelley (1792-1822) with whom together she and Claire went for a six week tour of Europe in 1814.

In 1815 she gave birth to her and Percy’s daughter Clara who died a few weeks later. Mary and Percy Shelley married in 30 December 1816 in London. They cooperated and wrote the History of Six Weeks Tour about their travels. In 1816, Mary started to write her Frankenstein. It was published in 1818 and became one of the first best sold female author works. Shelley adopted much of her father William Godwin’s philosophical ideas and in Frankenstein her conclusion is thus: man’s obsession with perfection can ultimately end in ruin. Today it is still popular and has inspired various adaptations to the stage and screen.

After Frankenstein, Mathilda (1819), Prosperpine and Midas (1820) followed. In 1822, Percy was sailing on his schooner and faced a storm and sank. Mary compiled his poetry and published The Complete Poetical Works of Percy Bysshe in 1824. In 1823 Mary returned to England where she continued work on her own novels including Valperga (1823) and wrote a number of short stories, essays, poems, and reviews that appeared in various journals and magazines including London Magazine and Westminster Review. Her second most popular novel, The Last Man was published in 1826.

Other works to follow include; Perkin Warbeck (1830), Ledore (1835), Falkner (1837), and Rambles in Germany and Italy (1844). Mary Wollstonecraft Shelley died at home in London at the age of fifty-four on 1 February 1851. Mary Shelley lived a literary life. Her father encouraged her to learn to write and during childhood she loved to write stories. In her own lifetime, Mary Shelley was taken seriously as a writer, forgetting her political achievement. However after her death, however, she was remembered only as the wife of Percy Bysshe Shelley and as the author of Frankenstein.

Today Mary Shelley is considered to have an important role in the Romantic period, significant for her literary achievement and her political voice as a woman and a liberal. Although women writers were unacknowledged by critics and scholars until the late twenty century, there are hundreds of women that gained popularity and were serious competitors to male writers during the period of romanticism. The women mentioned in this essay are only some of the many influential people of the Romantic Period. The role, talent and importance and influence of works by women writers on other works, also on those of men writers, are undeniable.

Woman Writers of the Romantic Period. (2020, Jun 02). Retrieved from https://studymoose.com/woman-writers-romantic-period-new-essay 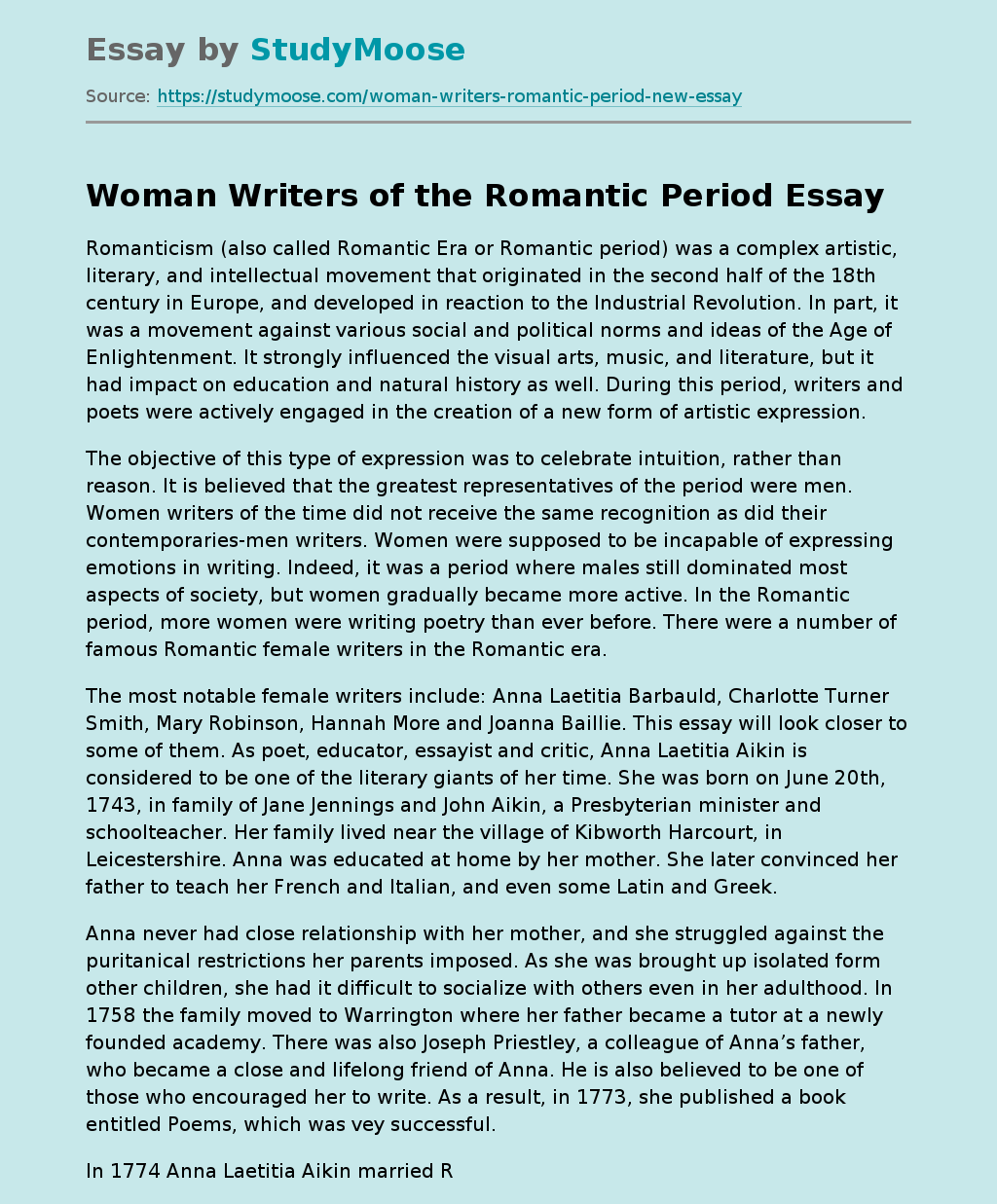