The entire framework of human affairs changed radically in the early modern period. There were numerous important changes in this period of globalization of life. There appeared new-style empires and giant state systems that were destined to govern and control global political as well as the military affairs. All the important societies of the period underwent internal transformation, for example the changes happened in the Western European society. The early modern period also witnessed the surfacing of the networks of interaction across the world.

Turn in your highest-quality paper
Get a qualified writer to help you with
“ The early modern period 1500-1800 ”
Get high-quality paper
NEW! AI matching with writer

These developments of the early modern period rearranged the global configuration of the societal power.

All the agricultural societies of the pre-modern civilizations of the West underwent great changes and got transformed into powerful industrial societies by the end of the early modern era. There also happened few notable changes that changed the face of the world societies that existed then. Three important events that contributed to this transformation are the commercialization of societies, the reformations in the world view (period of religious reformations) and the emergence of the World Economy (and the Exchange of New Products).

Commercialization refers to the changes or improvements happening to the regional, national or world economies, the increasing globalization of commercial chain and the growing influence of the Western European states and organizations. Sixteenth century witnessed a big growth in global trade and there appeared the specialized production of manufactured goods that flooded into the markets (Hall, 1985)[3]. Commercialization of the economy influenced all spheres of the society. Western Europe underwent a big commercial revolution that was the most important feature of the sixteenth century (Hall, 1985).

Global contacts and businesses improved and there occurred great demand for good in Europe. European countries gained several overseas colonies during the sixteenth and seventeenth centuries where they located new markets, products and raw materials. Gold and silver which were acquired from the Western Hemisphere (Spanish colonies) monetarized the European national economies and eventually brought the demand and price inflation (Reilly, 2004, pp. 412-503)[4].

Economic development and market improvement brought novel strategies of trade and investment which increased the impact of commercialization (Hall, 1985). Financial institutions like chattered companies and banks took over the financial and commercial activities making them more safe and reliable. This period of development paved the way for Agricultural revolution in the seventeenth and eighteenth centuries. Agricultural products started flooding in from the Western Hemisphere and new agricultural and farming technique replaced the old one.

Old peasant agriculture system was replaced and new farming equipments and methods became popular among the farmers. Agricultural sector underwent big changes as it became rich enough to supply for the food requirements of expanding cities. Modern textile products and processed foods flooded in the markets and people became financially secure enough to make big purchases in the market. Agricultural development accelerated the commercialization of the societies and brought improvement in all sectors (The Encyclopedia of World History: Ancient, Medieval, and Modern, 2001)[5].

All these developments marked the beginning of industrial revolution, particularly in France and Britain. Industrial revolution revolutionized the entire means, methods, policies and concepts of production. This huge production endowed great power to those societies that were completely industrialized. By the end of the early modern period not even a single agricultural society existed in the Western Europe, Industrialization and the rising commercialization had transformed the entire Western Europe (Ricklefs, 1981).

Reformations in the world view

Reformation of the world views constituted a major improvement of the early modern period. The religious civilizations in the Eastern hemisphere saw the birth of numerous religious ideologies that were originated in the postclassical era. The fundamental themes of the world religions also underwent several changes bringing new reformations and even new religions dramatically (Coedes, 1968). This contributed to the advent of new world views in all parts of the world (especially in Western Europe) by the closing of the eighteenth century. All these changes brought about new challenges to the postclassical synthesis in Western Europe.

As a result of the renaissance during the fifteenth and sixteenth centuries, the classical Greek and Roman thought gained much respect and also underwent few changes. The comprehensive catholic ideology and scholasticism faced started facing big challenges from the newly formed protestant group (The Encyclopedia of World History: Ancient, Medieval, and Modern, 2001). Protestant reformation is one of the most important changes that happened during these periods of the early modern era. Sixteenth and seventeenth centuries witnessed this crucial reformation (Reilly, 2004, pp. 412-503).

Protestant leaders like Martin Luther and John Calvin emerged and challenge the authority and outdated conventions of the Roman church. The power of the church to define the practices and doctrines was questioned by the Protestants during this period. Even though several big challenges arose everything abided within the framework of Western Christianity and fully agreed to the authority of the Holy Bible. Seventeenth century also saw the commencement of scientific revolution. Modern worldview and novel cosmology featured the modern technology and associated changes (The Encyclopedia of World History: Ancient, Medieval, and Modern, 2001).

Even though the traditional conventions and beliefs were not completely replaced, they were proved to be least irrelevant for the modern world. By the beginning of the eighteenth century, the emergence of modern secularism started separating religion from other aspects of public life, especially politics. Modern worldview and cosmology revolutionized the religious traditions and public life of Western Europe. Religion started withdrawing from major areas of public life. Religious leadership no longer exercised other rights and also got retired from the crucial roles. The traditions of Western Europe underwent major changes and the whole world started preparing themselves for a new modern era (The Encyclopedia of World History: Ancient, Medieval, and Modern, 2001).

Emergence of the World Economy and the Exchange of New Products

Commercialization of the world societies resulted into the commercialization of global businesses. The local, regional and international networks of commercial exchange started gaining demand by the middle of the sixteenth century. New trade relations were established and the colonies belonging to the European giants became the major resource providers (The Encyclopedia of World History: Ancient, Medieval, and Modern, 2001). Indian and Mediterranean basins became busy with trade and several other new zones emerged. European-controlled trade established several networks across the world; Pacific and Atlantic oceans became the road for oceanic trade.

The major centers were connected by continental overland routes for facilitating trade. Overland trade routes were established in Asian countries, Europe, Russia and other trade centers of the Western Hemisphere (Hall, 1985). A gigantic global commercial network controlled by the European countries came into existence during the closing of the eighteenth century. This commenced the era of maritime trade and facilitated the trade and exchange of products from different parts of the world (The Encyclopedia of World History: Ancient, Medieval, and Modern, 2001).

This global integration helped the buying and selling of products from remote parts of world. Products from the Western world got big demand in the markets of the Eastern Hemisphere (Hall, 1985). Raw materials were shipped from the colonies to the western countries where they transform it to finished products, using their modern technology. These finished products found market all over the world which made the European giants make big profit to improve their financial strength. Trade and commercialization thus marked the closing of the early modern era (Reilly, 2004, pp. 412-503). 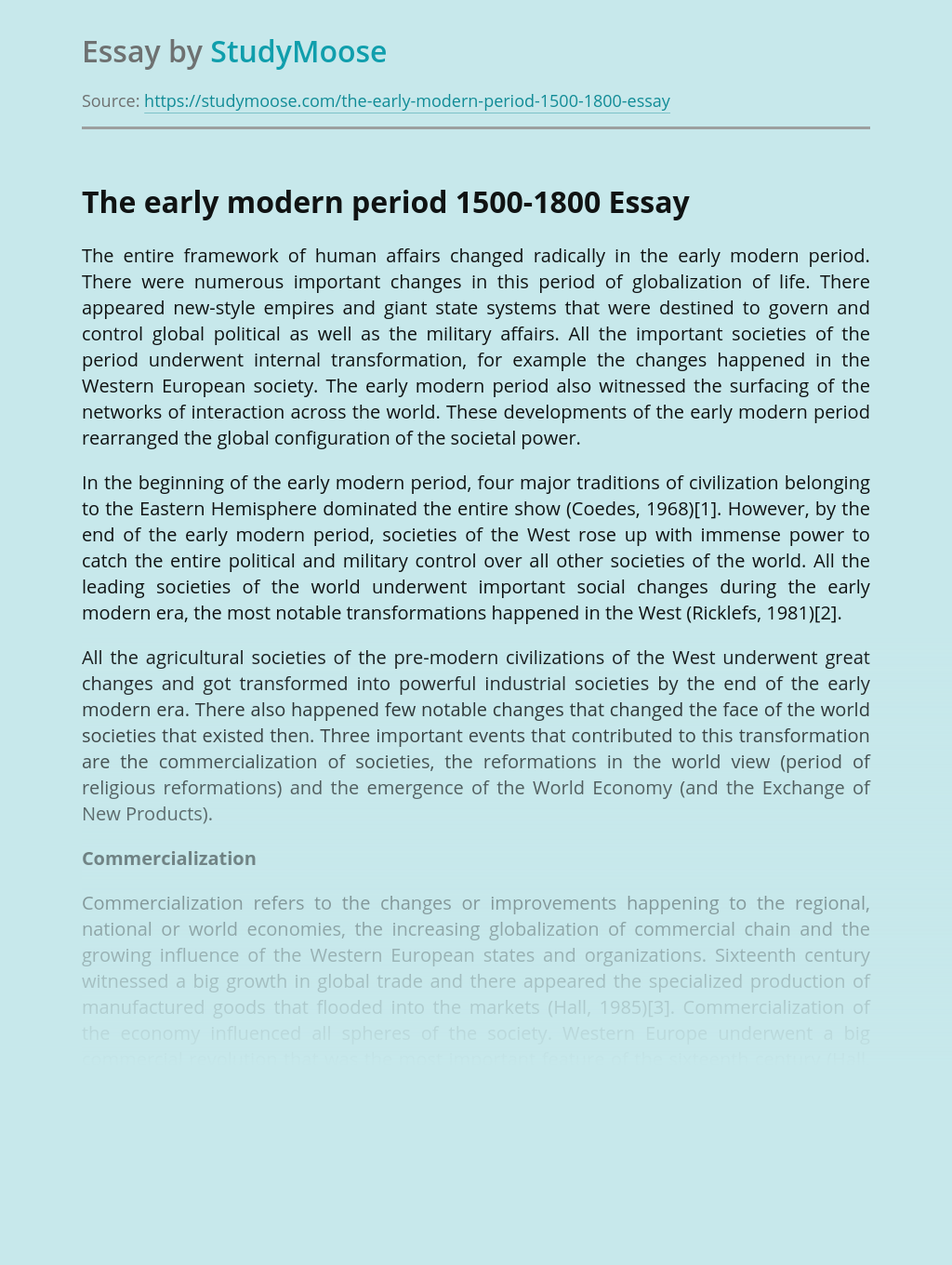 Turn in your highest-quality paper
Get a qualified writer to help you with
“ The early modern period 1500-1800 ”
Get high-quality paper
Helping students since 2015
Stay Safe, Stay Original