The pathway of air in amphibians, birds, fish, and humans.

How are they alike, and different? Is one more efficient than another? Gills/Lungs?HumansIn humans air travels into the mouth, or nose, and into the nasal cavity, followed by pharynx. The pharynx is where food and air cross paths. The pharynx increases the chance of choking, but also allows breathing when exercising and respiration though the mouth, if the nose is closed. Next, epiglottis opens allowing air to move into the glottis, and pass the larynx (voice box). After this air makes its way into the trachea which cleans the air with cilia.

Don't use plagiarized sources. Get your custom essay on
“ The pathway of air in amphibians, birds, fish, and humans. ”
Get custom paper
NEW! smart matching with writer

The cilia move in the trachea and remove viruses, dust, or other unwanted material by trapping it in mucus.

The alveoli diffuse oxygen into the capillaries who take it to cells that needs it. Humans breath in with the help of the diaphragm. When the diaphragm drops, the muscles and ribs contract which causes a negative pressure in the lungs and thoracic cavity, causing air to move into the lungs. When the ribs return to their original position, and the muscle and lungs relax, air is forced out of the lungs. As air travels into the nose, and into the lungs, air is moistened, and warmed up by the body.

FishCompared to terrestrial animals fish are faced with a challenge during respiration. The challenge is how to get enough oxygen to sustain life. Water contains a fraction of oxygen compared to air. Fish also use 25 percent of their energy just to breath. Fish obtain water and oxygen though their gills. In order to open their gills, fish open their mouth, causing the opercula to close, which forces the gills to open. When the gills are open water is allowed into the respiratory system. When the fish wants to close its gills it will close its mouth, which opens the opercula and closes the gills. On the outside of the gills arches, the gills are composed of filaments that are organized into lamellae.

Respiration is similar in both fish and humans in a few ways. First, both humans and fish need moist air. Second, they both have capillaries on a type of air sac that absorbs oxygen by diffusion.

There are also many differences in the respiration between a human and a fish. First, humans use lungs, and fish use gills. Human air sacs are called alveoli, and fish air sacs are called lamellae. Fish cannot make their air moist, unlike humans. Fish use countercurrent in order to absorb oxygen and absorb 80 to 90 percent of oxygen in the air, while dont use countercurrent and humans absorb 25 percent.

Lungs are more efficient than gills, because they absorb more oxygen, and use less energy. (air as more oxygen than water does) Lungs need 1 to 2 percent of the energy in an organism, while gills need 25 percent.

Amphibians go though respiration in two different ways. The air moves down the mouth, or nostrils, into the trachea, which divides into two bronchi, followed by lungs. Most amphibians to some extent breath though their skin, which is possible because of the presence of mucus produced by glands on the surface of the body. During the winter amphibians burrow into the mud, and all respiration occurs though the skin. Amphibians use positive pressure to move air into the body. They close their nostrils and drop the floor of the mouth which pushes air into the lungs.

There are many similarities between Amphibians and Humans, such as they both have trachea, bronchi, and lungs. Humans and Amphibians also breath by using negative pressure. The difference between human and amphibian respiration is that amphibians can breath though their skin. Amphibians close their nostrils, and drop the floor of their mouth, to move air into the lungs. Humans drop the diaphragm and contract muscles.

BirdsAir travels though the nares (nostrils), into the nasal cavity, though the larynx and into the trachea. Air than arrives at the syrinx, which is the point just before the tracheadivides into two. Below the syrinx, the trachea splits into two different passage ways. The air travels though the trachea and into the posterior air sacs. Than a small amount of air will pass through the caudal air sacs to the lungs. Birds have a unusual breathing pattern; they will inhale 2 times and exhale 2 times for air to enter and exist the body. During the first exhalation the air moves from the posterior air sacs though the ventrobronchi and dorsobronchi into the lungs. The dorsobronchi is further divided into air capillaries. Blood capillaries flow though the air capillaries and oxygen and carbon dioxide are exchanged.

When the bird inhales the second time the air moves into the cranial air sacs. On the second exhalation the air moves though the cranial air sacs, though the syrinx into the trachea, larynx, though he nasal cavity, and out of the nostril. Birds dont have a diaphragm, so air is moved in and out because of pressure changes in the air sacs Muscle that is located in the chest cause the sternum to be pushed outwards. This creates a negative pressure in the air sacs, which causes air to enter the respiratory systemThere are many similarities between birds and humans. Both humans and birds have nostrils, nasal cavity, larynx, trachea, and lungs. Humans and birds inhale and exhale because of negative pressure. Birds and humans have blood capillaries which exchange gases from a sac like structure.

Like similarities there are many differences between birds and humans. First, Birds have syrinx and air sacs and humans do not. Birds must inhale and exhale two times to move air in and out of the body. Air moves though more chambers in a bird than a human. Birds contract muscle and move sternum to breath, and humans move diaphragm, and contract ribs and muscles to breath. Oxygen enters the circulatory system though air capillaries in birds, and alveoli in humans.

Gill or Lungs?When comparing gills and lungs, lungs are the more efficient organ. Gills can absorb 80 to 90 percent of oxygen from water, but use 25 percent of the organisms energy. This may sound like gills extract a high amount of oxygen, but when you compare water and air with the same volume, you will find that water has 3 percent of the oxygen that is in air. Compared to gills, lungs absorb 25 percent oxygen from the air. This means that lungs absorb more air than gills. Animals with lungs only use 1 to 2 percent of their energy in respiration. In conclusion lungs are more efficient than gills.

The pathway of air in amphibians, birds, fish, and humans.. (2016, Jul 29). Retrieved from https://studymoose.com/the-pathway-of-air-in-amphibians-birds-fish-and-humans-essay 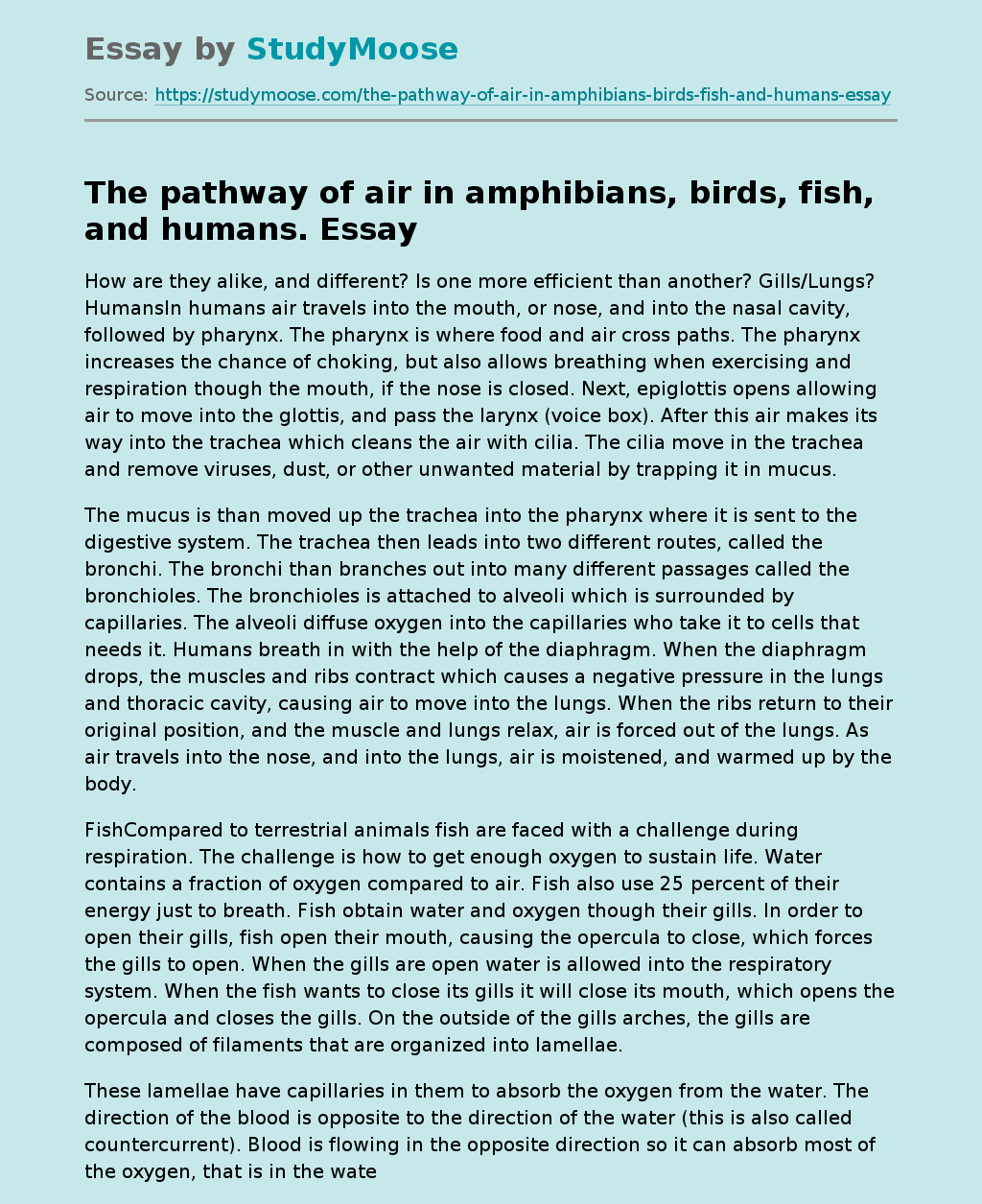