Imagine being stranded on a world alien to your own, unknown which direction you are facing, how long until the night falls, wondering if you will ever make it home to see your family again. One of the most fascinating human characteristics is the way we operate in Isolation. In both Ernest Hemingway’s The Old Man and the Sea and Andy Weir’s The Martian, the protagonists are stranded in places foreign of their own. However, isolation in the middle of the ocean is a whole different ball game to interplanetary isolation.

Don't use plagiarized sources. Get your custom essay on
“ The Old Man and the Sea and The Martian by Andy Weir ”
Get custom paper
NEW! smart matching with writer

Both Santiago and astronaut Mark Watney struggle through their hardships and become triumphant, never yielding to the insurmountable forces of nature despite their desolation. In The Martian, we watch as the brave botanist Mark Watney is stranded along on Mars, forcefully separated from everything and everyone that he holds dear. The planet Mars isn’t the most terrifying aspect of his predicament, it’s his crippling loneliness. “Mars is a barren wasteland and I am completely alone here.

Proficient in: Science And War

I already knew that of course.

But there’s a difference between knowing it and really experiencing it” (Weir 101). When Mark leaves the Martian Habitat to go out on the surface, he gets a brutal reminder of how isolated he truly is. The Hab provides a level of comfort— the presence of this man-made structure reminds him that his home is somewhere upon the orange hue of the Martian atmosphere. Mark’s isolation causes him to feel a bit crazy, and other times a bit hopeless, other times wishing he had a volleyball as a best friend.

As we watch Mark endure these difficulties and suppress these dark feelings, a lot can be learned about how he copes with the powerful effects of isolation in comparison to Santiago.

Mark’s situation is quite a but like Santiago’s, however in the old fisherman’s case, he is forced into isolation amongst his peers. He struggles with his loneliness, but distracts himself with tasks and catching the marlin. “His choice had been to stay in the deep dark water far out beyond all snares and traps and treacheries. My choice was to go there to find him beyond all people. Beyond all people in the world” (Hemingway 96). Santiago spent most of his life isolated from people, especially out in the deep blue. In fact, his isolation defines who is is, despite being a weakness. However, his loneliness becomes a key element in his battle with the marlin.

The theme of isolation is prevalent in both of these novels. In most stories, loneliness gives the reader a sense of urgency and impact for the stakes that the story sets up. Even though Mark Watney is a peppy, proactive character there’s no doubt in anyone’s mind that being stranded totally alone on a planet 140 million miles from home is not the most ideal of situations. To make up for this, however, Mark uses his intellect and wit in order to keep his sanity while Santiago uses pure strength and endurance to accomplish his goal.

“This will kill him, the old man thought. He can’t do this forever. But four hours later the fish was still swimming steadily out to sea, towing the skiff, and the old man was still braced solidly with the line across his back” (Hemingway 80). Santiago’s battle with the fish isn’t just a battle of strength-It’s a battle of wills. We can connect Santiago with the marlin because their endurance matches each other, sharing a determination that ultimately separates man from the creature. Similarly, Mark’s perseverance is what keeps him alive. Mark uses his shrewdness to his advantage, taking the seriousness of the situation and turning into a learning experience.

“Sirius 1 was aborted after one hour. I guess you could call it a ‘failure,’ but I prefer the term ‘learning experience,’” (Weir 68). Mark’s mission on Mars is exciting, he can’t expect to do everything right on the first try. He keeps trying and is eventually successful; one of his more honorable traits. Both Santiago and Mark Watney show a connection through their endurance. They both, however, see their situations in a different light. Their vision of becoming something bigger than themselves is what drives them to continue on, even though it may be hard in isolation when giving up is just as easy. In The Martian and The Old Man and the Sea, the theme of Isolation is prevalent between the two works. Throughout the stories, we see the way Mark Watney and Santiago handle their loneliness, and how perseverance is a key role in doing so.

The Old Man and the Sea and The Martian by Andy Weir. (2021, Dec 02). Retrieved from http://studymoose.com/the-old-man-and-the-sea-and-the-martian-by-andy-weir-essay 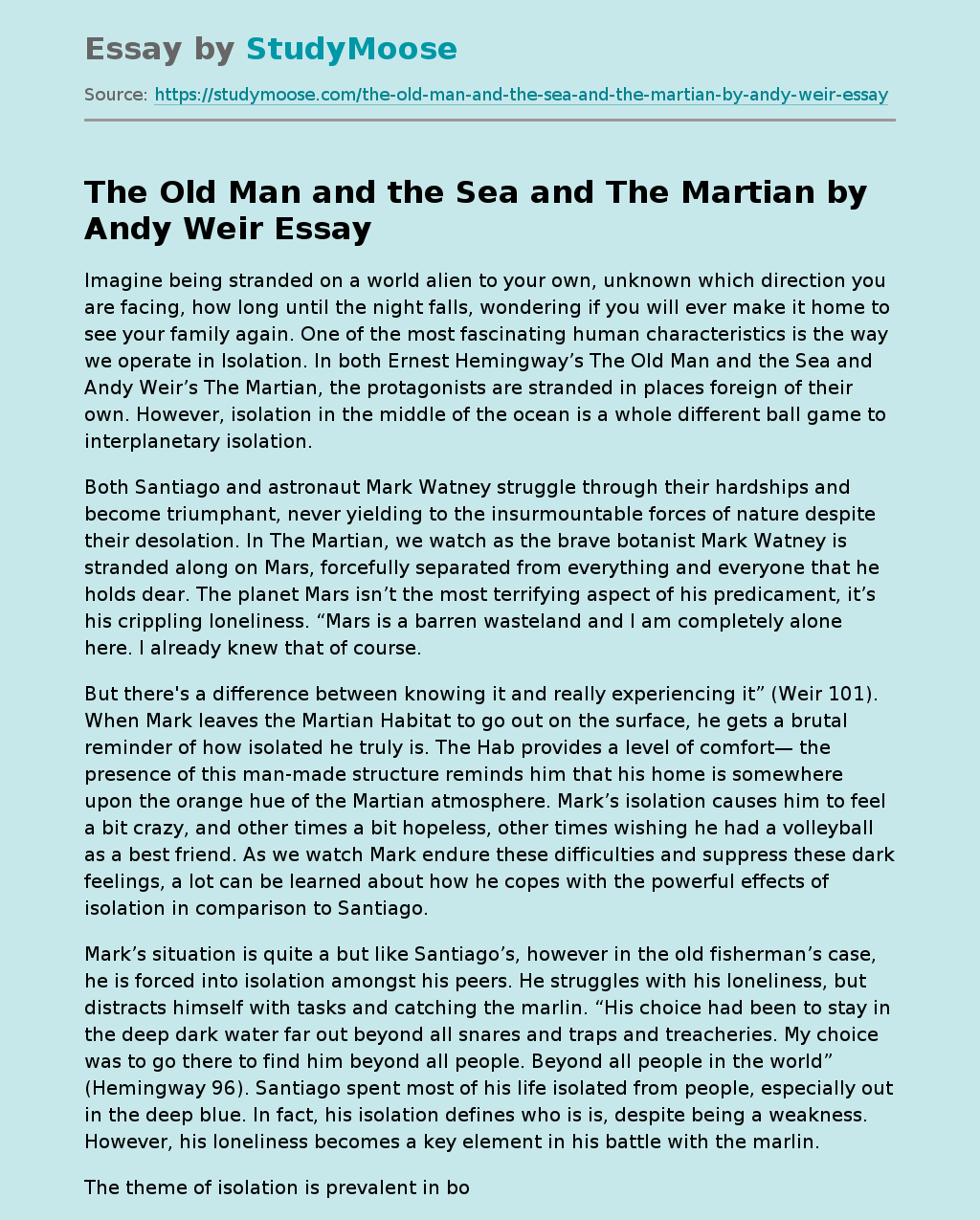