The provision of school meals in America began, as it did in many other lands in a rather sporadic way. According to the web site about the history of the School Lunch Program, in New York The Children’s Aid Society started a program in 1853, but it wasn’t until Robert Hunter’s book ‘Poverty’ was published in 1904 that other areas really took up the challenge. Hunter felt that it was no good having a law that compelled children to go to school if they were so hungry that they couldn’t concentrate or gain much benefit.

Don't use plagiarized sources. Get your custom essay on
“ The National School Lunch Program ”
Get custom paper
NEW! smart matching with writer

In Philadelphia the Starr Association had begun serving penny dinners in 1894 and in 1908 programs were begun in Boston by the Women’s Educational and Industrial Union. The children ate their dinners at their desks, there being at that time no school food halls. By the end of the 1910 school year 2,000 pupils were being served.

Ellen H. Richards wrote in the “Journal of Home Economics” for December 1910,

“The teachers are unanimous in the belief that the luncheons are  helping the children both physically and mentally.

They are more  attentive and interested in the lessons during the last hour of the morning and the result in their recitations gives the proof. “

The National School Lunch Program started in 1946 under the National School Lunch Act signed by the then president Harry S. Truman, though school meals had been provided for many years before that through foods and subsidies from the United States Department of Agriculture. The reasoning behind the act was not just nutrition, but national security.

This was because when America entered World War II it found that many recruits were of poor physical condition, especially those who had grown up in poor families during the depression years of the 30’s. As soon as that war finished America began to think about the next wave of conscription as it expected to have to fight communism in the near future. It was mainly under the auspices of General George C. Marshall, a member of the cabinet. According to the statute book its aims were as follows:-

It is hereby declared to Congress, as a measure of national security, to safeguard the health and well-being of the Nation’s children and to encourage domestic consumption of nutritious agricultural commodities and other food, by assisting the States, through grants-in-aid and other means, in providing an adequate supply of foods and other facilities for the establishment, maintenance, operation, and expansion of nonprofit school lunch programs.

The federally assisted program now operates in 100,000 both public and private schools. 7.1 million children benefited in the first year and the program now provides lunches to 29 million school children each day. The cost in 1947 was $70 million, but by 2005 it was $7.9 billion – a huge investment in the future health of the nation. The aim is that meals are free or at a low cost and that they are nutritionally balanced. In 1998 the program was expanded to include young people up to the age of 18 and also to include snacks served to children at after school educational and enrichment programs. At state level it is usually under the state education authorities who operate through agreements with the school food authorities.

Usually it is high schools, both public and non-profit making private ones, who participate as well as private residential child care facilities who take part in the program. I t works by giving both cash and commodities to the institutions involved, the latter, known as ‘entitlement foods’ coming from the U.S. Department of Agriculture at a value of 16.75 cents for each meal served. They may also be given extra food from surplus stocks. In return the schools must meet federal standards in the food that they serve and offer these freely or at a reduced price to eligible children. Other support is available through the USDA’s Team Nutrition who provide nutritional and technical help and also provide nutritional education for pupils.

The schools may decide for themselves which foods are served, but must comply with Federal nutritional guidelines which state that no more than 30% of calories should come from fat and less than 10% from saturated fat. They should also provide at least one third of the recommended needs for protein, vitamins, iron, calcium and calories.

When it comes to after school snacks if more than half the children in an area are eligible for free or reduced price school meals, then snacks may be free too. Reimbursements to the schools vary a little. Those in Alaska and Hawaii receive more, as do schools with a very high percentage of poorer pupils. There are links with local producers who can provide fresh food such as salad vegetables and fruit. The USDA works with the Department of Defence to provide food purchased through the Department of Defence. The supplies are monitored for fat content and their safety.

Programs such as this provide children with the possibility of at least one nutritionally balanced meal a day. This may be prepared in a central kitchen, either r private or belonging to the educational authorities and distributed to schools. Other schools have their own kitchens. What the program can’t do is ensure that the meals are eaten rather than some fast food bought in or bough tin school from vending machines.. they also cannot ensure that the rest of a child’s nutrition is balanced or indeed that he gets enough other food.

They educate children about nutrition, but children are not usually the food buyers or cooks at home. It may be, especially in the case of minorities and new arrivals, that the children find school meals unpalatable simply because they are different to what they get at home. Vending machines are in schools which provide other foods at extra cost which are not necessarily nutritionally so good such as chips and soda. There will always be children who prefer these. It would be a dictator who insisted that every one ate the same food, but do these poorer foods have to be so freely available? However many schools raise much needed funds in this way, though child obesity it must be said is a growing concern.

For many children their school lunch is the main meal of the day. It is easy to give in to the demands for fast foods, even when those doing so know that they are ultimately harmful. Schools can either use a Nutrient Standard or the older food Group system when choosing the foods they provide. The Nutrient Standard is more accurate in providing a balanced diet, but most schools still prefer the older system. Choice USA recommends that parents regularly review the food that their children are receiving and discuss their choices with them.

The child Nutrition Act of 1966 followed on from the National School Lunch Act. Under this act free or low breakfasts could also be provided. This had been initiated by the Black Panther Party earlier. President Johnson said when he gave his signature to the act ‘Good nutrition is essential to good learning.’

There had also been a Special Milk Program which began in 1954. The United States tries to care for all its citizens and so there is also a Child and Adult Care Food Program for both children and elderly and mentally or physically impaired adults in non-residential centers, and the Food Stamp program which began in 1953, so there has been a move away from just ensuring that those called to military service are fit to serve. All this from such small beginnings in one New York school. 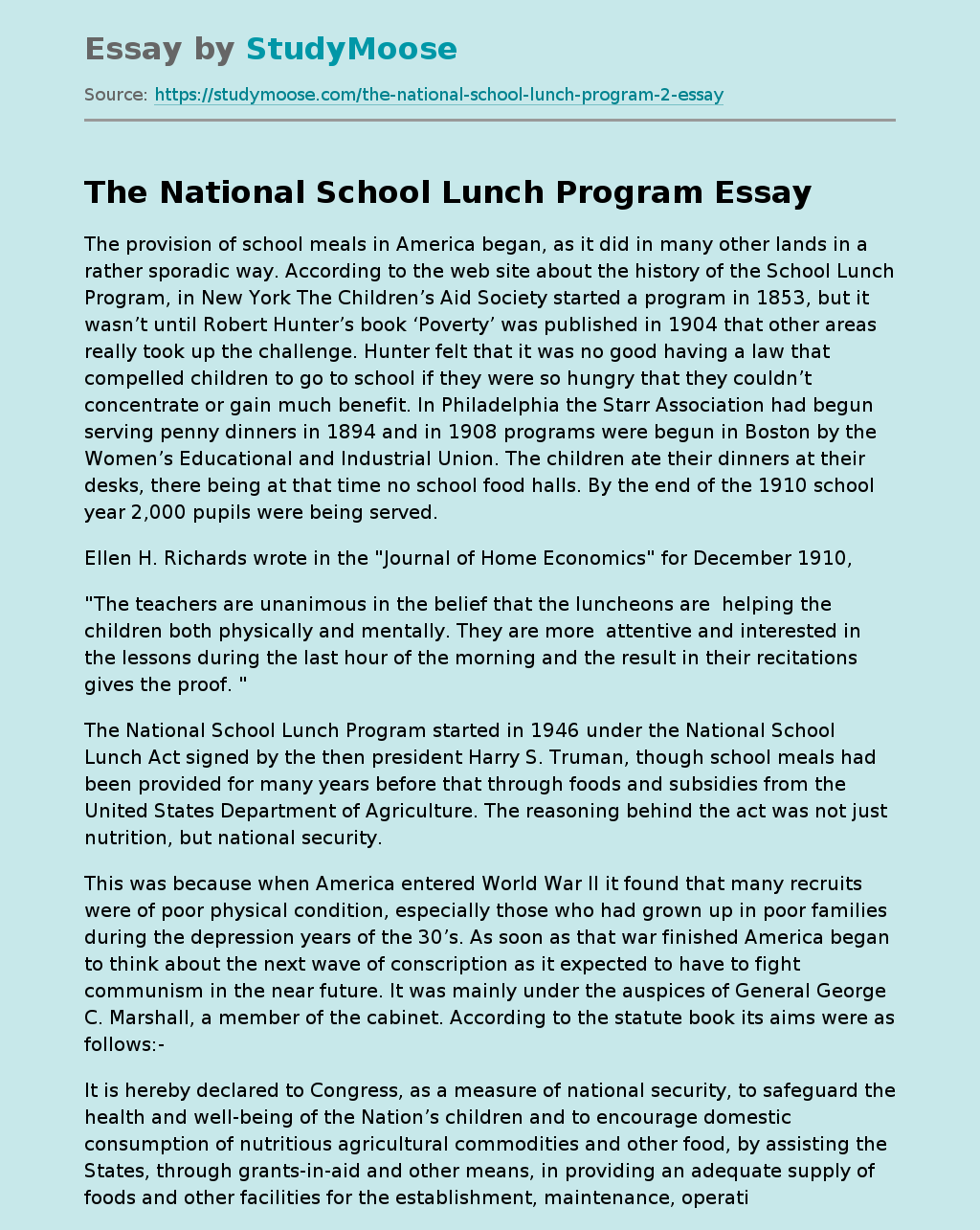