The Most Hated Person in "The Great Gatsby"

“So we beat on, boats against the current, borne back ceaselessly into the past.” It is the 1920’s, or the roaring 20’s. At that time, a lot of people were thriving and the economy was booming, the stock market was going up, and it was a time of prosperity. There were a lot of wealthy men at that time, and they can be very unpredictable. They can be a caring gentleman, or abusive and controlling to women. There were a lot of parties hosted by wealthy people, with jazzy music.

Don't use plagiarized sources. Get your custom essay on
“ The Most Hated Person in “The Great Gatsby” ”
Get custom paper
NEW! smart matching with writer

The Great Gatsby is taken place during that decade. Most of these characters in the Great Gatsby are unique and unpredictable at the same time. Tom Buchanan is one of those wealthy people. Both Tom and Gatsby are fighting over Daisy. Although Tom and Gatsby are fighting over Daisy, Tom has a bad reputation and he is hated more. He has a bad reputation for cheating on his wife and he doesn’t want his wife to be with Gatsby.

Tom has a bad reputation throughout because he cheats on his wife. Both Tom and Daisy have a very poor and unstable relationship. There are times where Tom was cheating on his wife and where he is abusive to his wife. One reason is that he has an affair with his mistress, Myrtle. He also has an affair with her. “I first met Tom Buchanan’s mistress. The fact that he had one was insisted upon wherever he was known. His acquaintances resented the fact that he turned up in popular restaurants with her and, leaving her at a table, sauntered about, chatting with whomsoever he knew” (Fitzgerald 24).

Tom only cares about the wealth and money he has. This is an example of Tom cheating on his wife. Tom treats his wife and other women like it are just another object. He also takes his marriage for granted. There are times where Tom was caught cheating throughout the story. Daisy is in Tom’s possession. Daisy knows that she is being cheated low-key upset with him. This is the spark of the conflict of Gatsby and Tom.  Tom and Gatsby are in a feud. They are fighting over Daisy’s love. Daisy is the person who starts the conflict between Gatsby and Tom. Gatsby manages to have an affair with Daisy without Tom knowing. The conflict starts to heat up when Tom starts to ask Gatsby about Daisy. During the lunch, Tom then starts arguing to Gatsby about Daisy. “She never loved you, do you hear? She only married you because I was poor and she was tired of waiting for me. It was a terrible mistake, but in her heart, she never loved anyone except me” (Fitzgerald 130). In the first place, Daisy is already taken by Tom Buchanan. Daisy isn’t really satisfied with Tom because their relationship is unstable. Gatsby wants to prove himself that he wants to be with Daisy by attacking Tom with his words. He tried to use his words by saying false things about Daisy. Tom has a slight advantage over Gatsby. Most of the money Tom had was inherited through his family. Tom also exposed Gatsby about his criminal past. In the end, Tom wins the argument and prevented Gatsby earning Daisy’s love back. Even though if Daisy isn’t satisfied with Tom, she is still safe and secure with him because of the money he has.

The Most Hated Person in "The Great Gatsby". (2021, Apr 09). Retrieved from http://studymoose.com/the-most-hated-person-in-the-great-gatsby-essay 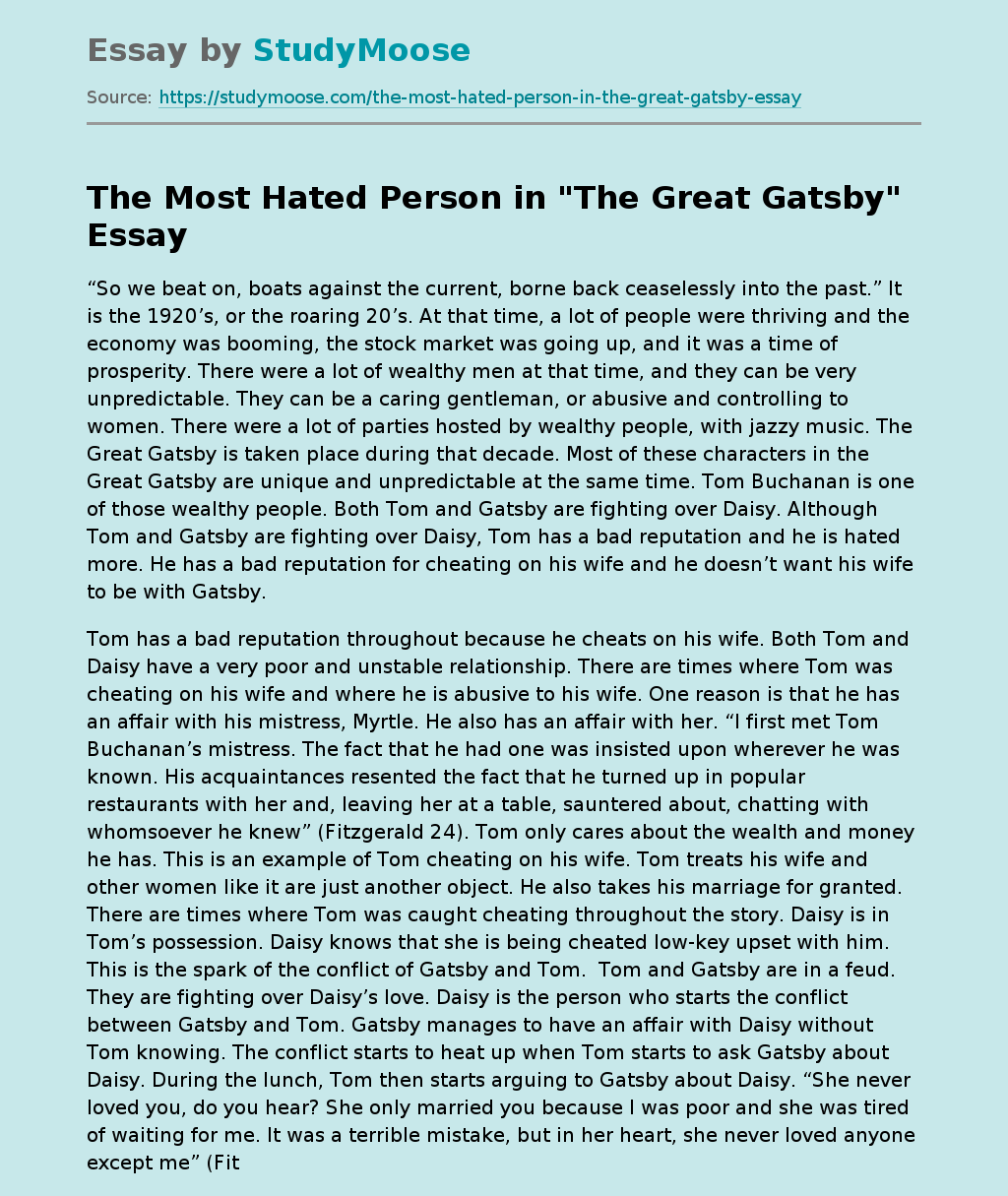