The microscope has been one of the greatest inventions in the history of science and has had the most impact on the course of science. Ever since the first microscope was invented in 1590, they have improved our knowledge in basic biology and biomedical research, as well as many other things, all of which are important. The smallest object a human can see with the naked eye is 0.2 mm, for example, algae cells. The light microscope, however, allows us to see things almost 1000 times smaller that what the eye can see, like plant, animal, and bacteria cells, and the electron microscope allows us to see things almost 1,000,000 times smaller, like viruses and proteins.

Don't use plagiarized sources. Get your custom essay on
“ The Microscope: Science’s Greatest Invention ”
Get custom paper
NEW! smart matching with writer

The Italians paved the road to the invention of the microscope when they discovered how to grind lenses during the 1300’s, and as a result, created the first spectacles. The first microscope was developed in 1590 by two Dutch lens grinders and spectacle makers Hans Janssen, father, and Zacharias Janssen, son, when they put two grinded lenses inside a tube.

Later in the 1700’s, many discoveries were made to improve the microscope. One was that lenses combining two types of glass could reduce the chromatic effect the previous microscopes had. Then, in 1830, Joseph Jackson Lister came up with another way of improving microscopes.

He reduced the problem of spherical aberration by using several weak lenses together at different distances giving good magnification without blurs. All of theses microscopes were light microscopes, however, so they were not powerful enough for the growing demand of magnification.

Microscopes look like very complex objects, but are actually not. Microscopes need to gather light from a tiny area of a thin, well-illuminated specimen that is close-by. Thus, the job of the light bulb. It is used to produce light that is all but blocked and concentrated to a tiny hole in the middle where the specimen is. Then the light shines through the specimen, and into the first lens, the objective lens, which gathers the light from the specimen, and passes it on to the second lens, the ocular lens or eyepiece, which magnifies it into your eye.

The coarse focus is used to make rough adjustments to make the picture less blurry and the fine focus is to fine-tune it. The nosepiece is used to change the objective lens which means you can change the magnification. Electron microscopes, on the other hand, are much more complicated. Basically, a stream of electrons is generated by an electron source, and is projected at the specimen. The stream is concentrated into a thin, focused, beam, and is focused at the specimen by a magnetic lens. Reactions and interactions occur inside the specimen, affecting the electron beam, which is then translated into a picture.

The invention of the microscope has definitely been a turning point in the history of man. With a microscope, we can now explain many phenomena we always thought were the creation of “freaks of nature” or God’s whims, like viruses and bacteria, and even how the body works. The first major discovery that used the microscope was made by Robert Hooke, who used his microscope to study various things, including corks. He was amazed to see that there were “holes” in the cork and decided to call them cells since they reminded him of the cells in monasteries monks lived in. Another major discovery that required the microscope was the discovery of single-celled organisms like protists and bacteria. These two discoveries sparked the accumulation of the monumental amount of knowledge of science we have today in biology, and even quantum physics and chemistry. 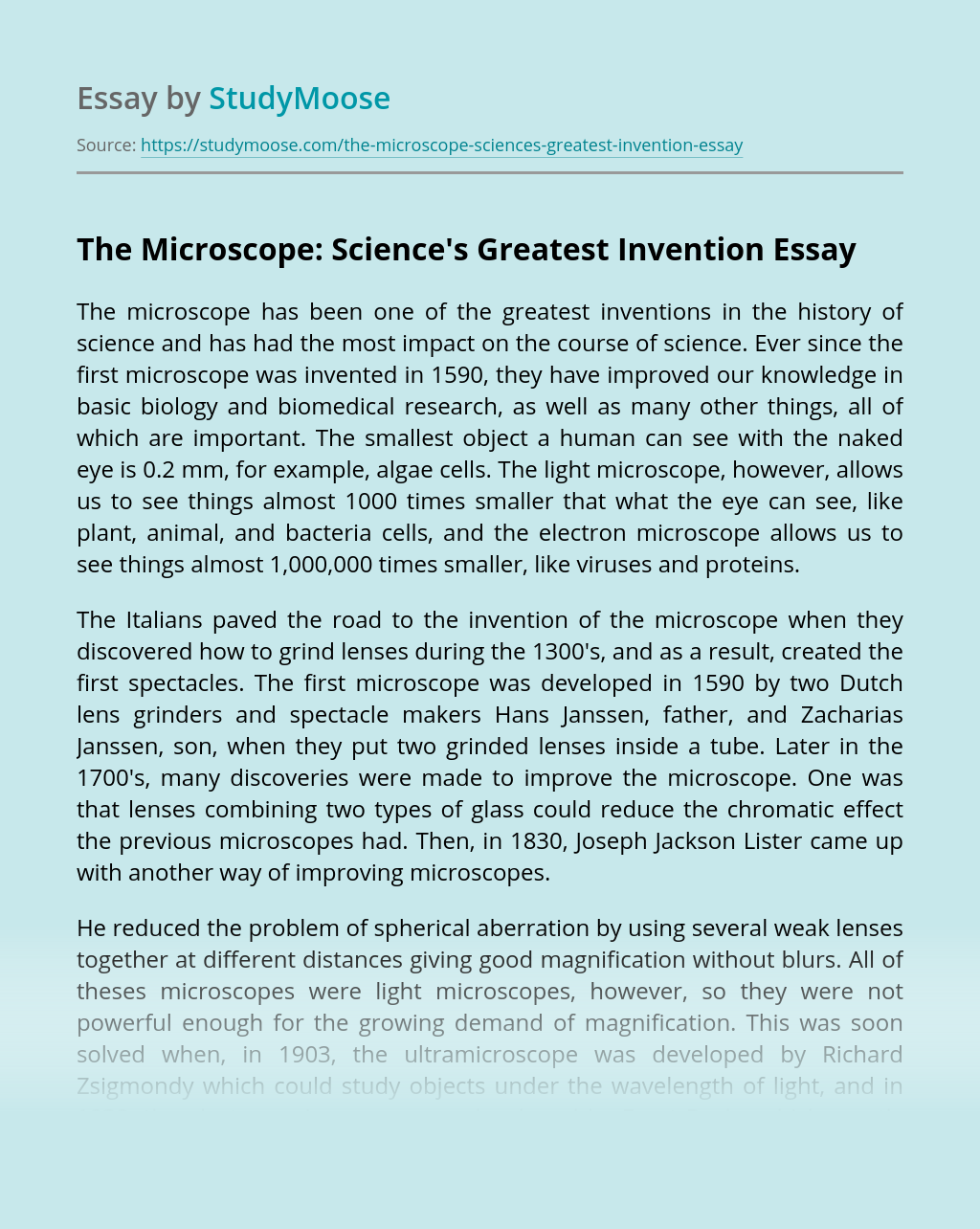