The Marriage of Figaro by Wolfgang Amadeus Mozart

The Age of Enlightenment was a period in European history when philosophies and trends were changing considerable. The Enlightenment was a time when reason and equality became accepted principles. Aristocracy and the over-indulgence of the very wealthy as compared to the peasantry was a concept that was being transformed into a philosophy that heralded the concepts of independence and equality.

The period itself is known for the revolutions it spawned in the political realm, such as the French Revolution and the American Revolution, but there were also revolutions going on in the arts, especially music and theater.

Don't use plagiarized sources. Get your custom essay on
“ The Marriage of Figaro by Wolfgang Amadeus Mozart ”
Get custom paper
NEW! smart matching with writer

Once only for the enjoyment of the aristocracy and the royalty, the opera and music would become an important fixture for the middle-class as well. In this way, the opera The Marriage of Figaro, written by Wolfgang Amadeus Mozart, is an interesting representation of the changes taking place in European culture and the arts in the 17th and 18th centuries.

The aspect of Mozart’s opera The Marriage of Figaro that was so controversial during its time, and that ties it so strongly to the Age of Enlightenment, is the central role that servants play in the performance.

The play itself revolves around the relationship between two servants, Figaro and Susanna, who are preparing to marry each other, but their master, the Count, decides that he wants to take advantage of his right to have sex with his servant Susanna on her wedding night (Beaumarchais and Mozart, 6). Immediately the issues prominent during the Age of Enlightenment are seen reflected in the storyline of the opera itself.

The period was marked by the changing composition of society, including the bourgeois class of traders, bankers, craftsmen, and merchants who were rising to a higher class, establishing a middle class in Europe that hadn’t really existed before. The highlighting of the roles of the servants within Mozart’s opera was innovative for its day because prior to this opera’s were only written and performed for the aristocracy and very strict rules were applies to the storylines that were acceptable and required.

One Enlightenment aspect that is very prominent within The Marriage of Figaro is the presumptions of class, which are depicted through the character of the Count who tries to take advantage of the medieval custom of taking the virginity of their female servants on the night of their wedding, before they have the chance to be with their own husband (Beaumarchais and Mozart, 18). Mozart was obviously using this to show the bad side of the aristocracy, a class that he would have known well as he was employed by the Archbishop of Salzburg as a house composer and musician and was treated more like a servant than an artist.

The image of a man of the aristocracy as a villain as opposed to being the hero was another instance within the opera when the influence of the Enlightenment could be easily seen (Beaumarchais and Mozart, 8). Because of the principles brought to light during this period of European history, The Marriage of Figaro was a reflection of the changing attitudes and assumptions of the new period in history.

Mozart’s opera The Marriage of Figaro is a fascinating reflection of the change in thinking and the progression in culture and society that was taking place in the 17th and 18th centuries in Europe, especially in places like Vienna, where Mozart would make a living as a composer and performer. The changing portrayal of the servants as the heroes and the aristocracy as the villains was a new and innovative approach to opera.

This was not an opera created for the wealthy alone, but for the masses, the emerging middle class that had the money to spend on entertainment. Mozart’s approach to this opera was to create something that was different and a reflection of the changing attitudes that were changing the way the world looked at the system that was in place. No longer just a servant, Mozart became a true artist through his work on such operas as The Marriage of Figaro.

The Marriage of Figaro by Wolfgang Amadeus Mozart. (2017, Mar 17). Retrieved from http://studymoose.com/the-marriage-of-figaro-by-wolfgang-amadeus-mozart-essay 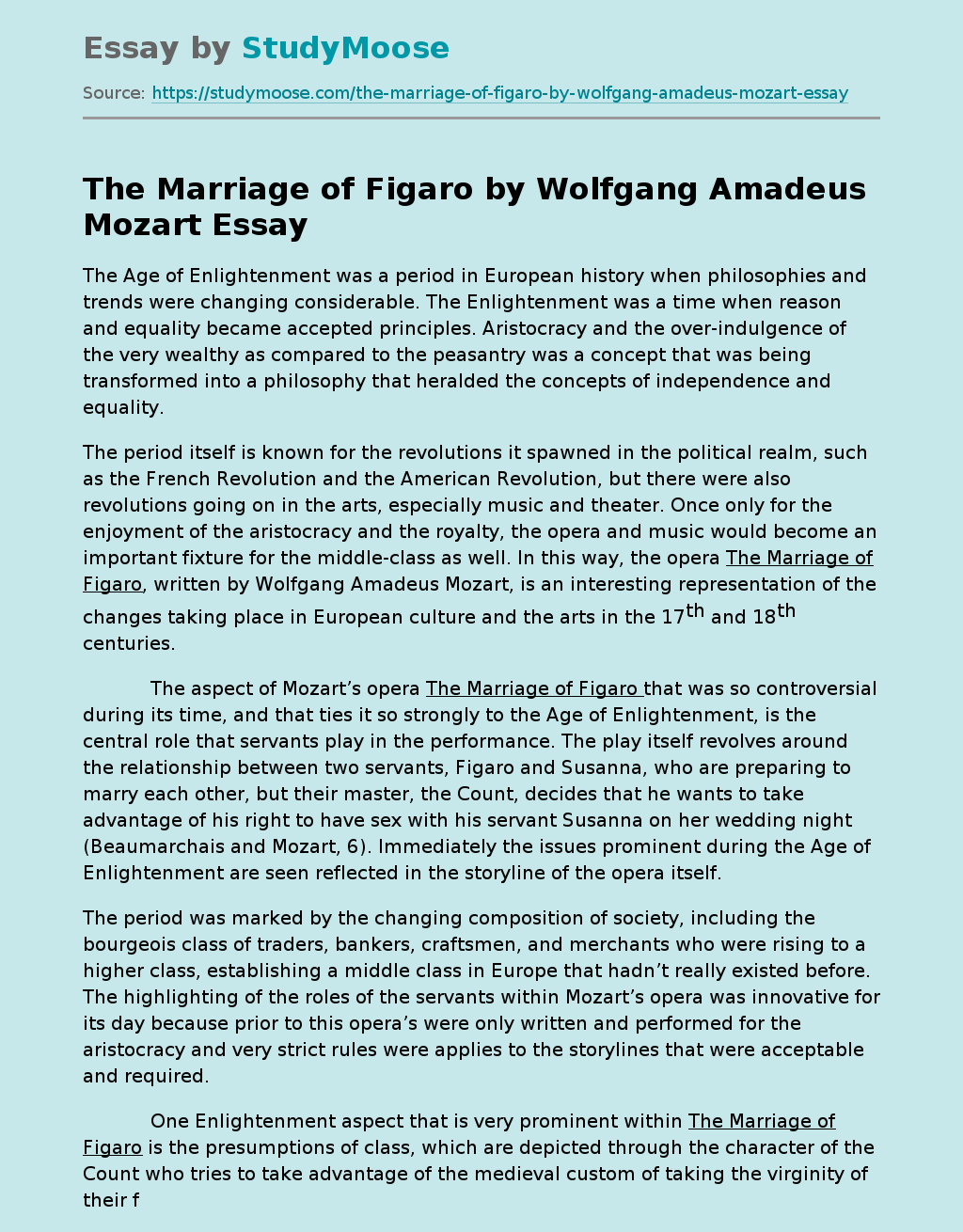