The short story ” The Lottery” by Shirley Jackson was a confusing and odd read for me. However, it was unique as well. Starting off, the story introduces the village lottery day and makes the reader believe that it is a positive thing, however, in irony it turns out to not so necessarily be a lottery. While I reading the story I was getting excited to see who the lottery winner was going to be and thought who wouldn’t want a lottery every year.

Don't use plagiarized sources. Get your custom essay on
“ “The Lottery” by Shirley Jackson Response Paper ”
Get custom paper
NEW! smart matching with writer

I then saw that it was a lottery of which person they were going to sacrifice from the village that year. Shirley Jackson does a good job using different themes to make the reader learn lessons from reality itself. The story was actually a representation of humanity and the society we live in.

In Shirley Jackson’s short story, she actually reveals the THEME that most people pretend not to see; violence and cruelty. Humanity is not always extremely kind; in fact, humans can be very brutal creatures.

In the short story, the people of the village gather around and almost create a ceremony out of a lottery to decide who is going to get killed. They then use the stones they had previously gathered up and stone the person. Another thing I realized is, it was a every man for themselves kind of situation. During the withdraw of the “lottery”, Tessie Hutchinson’s family did not seem to help their mother/ wife out. They almost seemed relieved it wasn’t them.

Jackson uses the sense of MAN VS. SOCIETY CONFLICT to really show us that society may actually accept things that some of us don’t agree to. Although some might find it to be immoral, society still tends to accept the immoral.

When I reread the story for a second time, I can see the FORESHADOWING that the author applied. In the beginning of the story it states how the little children were gathering the stones and making a pile with them in the town square. At first it seems as if its just childish play but we then see at the end of the story what the main purpose of those stones were. Also, the way Tessie was one of the last people to arrive to the lottery and how when she arrived everyone made way for her and it was almost as if everyone was waiting for her. These details of the story were actually a foreshadowing of her fate.

The first time I read “The Lottery” by Shirley Jackson, it was surely a confusing read and really weird. However, once I figured out the theme of the story and all the little elements that the author had applied in the story, it made much more sense when I reread it a second time. The main concept of the story was reality put into a story form. 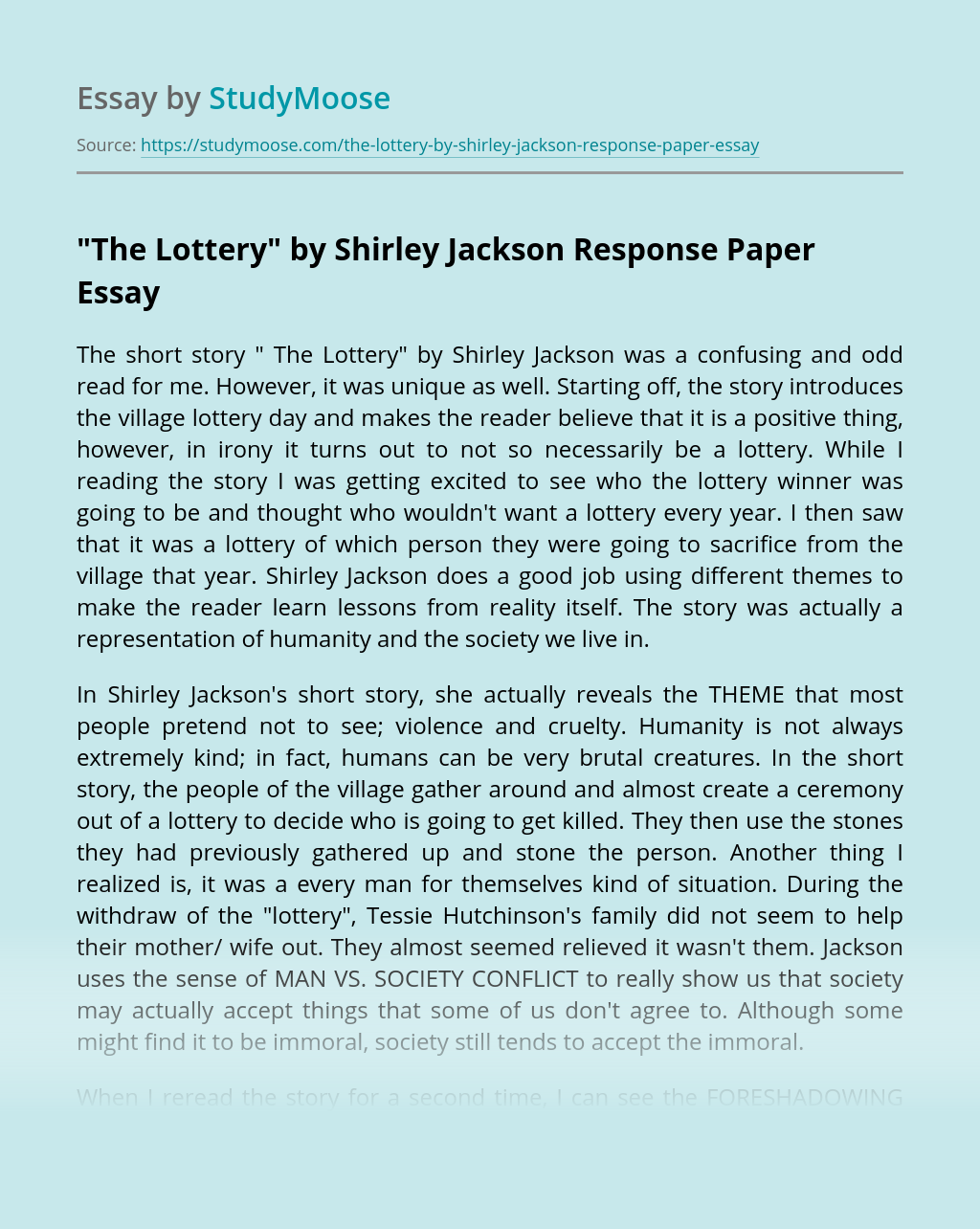