The Life Of A Simple Man

The Life of a Simple Man is a book written by Emile Guillaumin. It is about a French man by the name of Etienne Bertin. The story is set during the reign of Napoleon in France. Etienne grew up amongst the peasants of the French lower class. He grew as the son of a father therefore he didn’t not have much knowledge of the urban society of the larger towns and cities of the time. Also, because he was the son of a peasant farmer, he was not introduced to an education because his family could not afford it, and education was not something that the people of time considered to be as important.

The book altogether is not a good historical source. It is a secondary source because it is a book written by an author, which contains characters that may or may not have actually existed at the time. The book does not accurately portray the happenings of events at the time, for all we know so of the details may have been fictitious and made up by the author.

The purpose of the book is to present its audience with an insight of the life of a peasant and to make it more entertaining it contains a character who leads a life that not all peasants we fortunate to live. The setting of the book is in rural France, which is greatly convenient as the book is about a French peasant. The setting changes throughout the story.

The book reveals that the nature of the peasant life was not all that pleasant, as one would imagine. Sanitation would be a major problem, but the peasants lived to deal with it. Peasants tended to have large families; preferably sons to help do the farming while to women stayed at home and fulfilled their duties. The large families caused crowded living conditions and so it was hard not to get onto each other’s nerves. Arguments were certain to break out and this caused families to break apart. For instance if the son and his wife are living at home with the son’s parents, they are certain to get into arguments, and once the son had enough money saved up to be able to stand on his own two feet, he would move out and begin to start life on his own with his own family. Family ties may or may not have been broken but this generally was the way things worked out in order to keep peace amongst the family.

The French Revolution and Napoleon had a large affect on the lives of the French peasants. Many peasants went off to join Napoleon’s army during his reign. This caused families to suffer somewhat due to the male going off to fight in the wars and not being home farming his land to supply and support his family with food and adequate funds. The French Revolution affected the lives of the French peasants in a way that it caused a lot of changes to be made in the way people lived. For instance the Equality of the Rights of Man was presented during the French Revolution, saying that all men were equal. This meant that all men were equal but women were not. But during the life of Etienne, this principle was not visible. Men were not treated equally especially if they were peasants.

Education was probably the biggest change the French faced during the French Revolution. Universal Primary Education was introduced to nearly everyone. Everyone had the opportunity to seek a good education if they wanted to succeed and move up in the ranks of society. During Etienne’s youth, he did not have the opportunity to pursue an education, which left him to do with what he had learnt through experience and what was available to him. As for his offspring, they had the chance to pursue an education if they were eager to take this newly available opportunity.

The Industrial Revolution affected Etienne in a way that he was introduced to something that he had never seen or experienced before in life. He had an opportunity to work in a factory and apply the skills he had to work that would reward him with reasonable pay. This was ever so convenient especially during the times where the crops were at their lowest production rate such as during the winter season. The Industrial Revolution gave Etienne the chance to earn a living for his family when they needed it much. The peasant class was probably the one that felt more grateful towards the Industrial Revolution as they can work amongst the higher social classes and get paid practically the same and eventually earn a better standard of living.

The classification of ones social standings was decided by the ownership of land, education, working skills, wealth, and whether or not if you were a rural or urban dweller. The Industrial Revolution changed this by giving everyone an opportunity to be able to acquire all of these traits no matter how rich or poor they were. Etienne was not fortunate enough to have had the opportunity to do so but his offspring had the chance, and the decision to take the chance or not rested on their own shoulders.

This book is overall a good read. You can learn a lot about the way French peasants lived during the various courses of history during a specific time period. You are introduced to the experience by getting placed into a peasant’s shoes and learning about his life. This book is not a reliable historical source as it is a secondary source. It seems more fictitious than real. Etienne is a character I enjoyed reading about. The author made him seem like he was a typical French peasant which really gets one interested in reading a book like such and at the same time learning about events in history that one would never have learned about from reading textbooks. 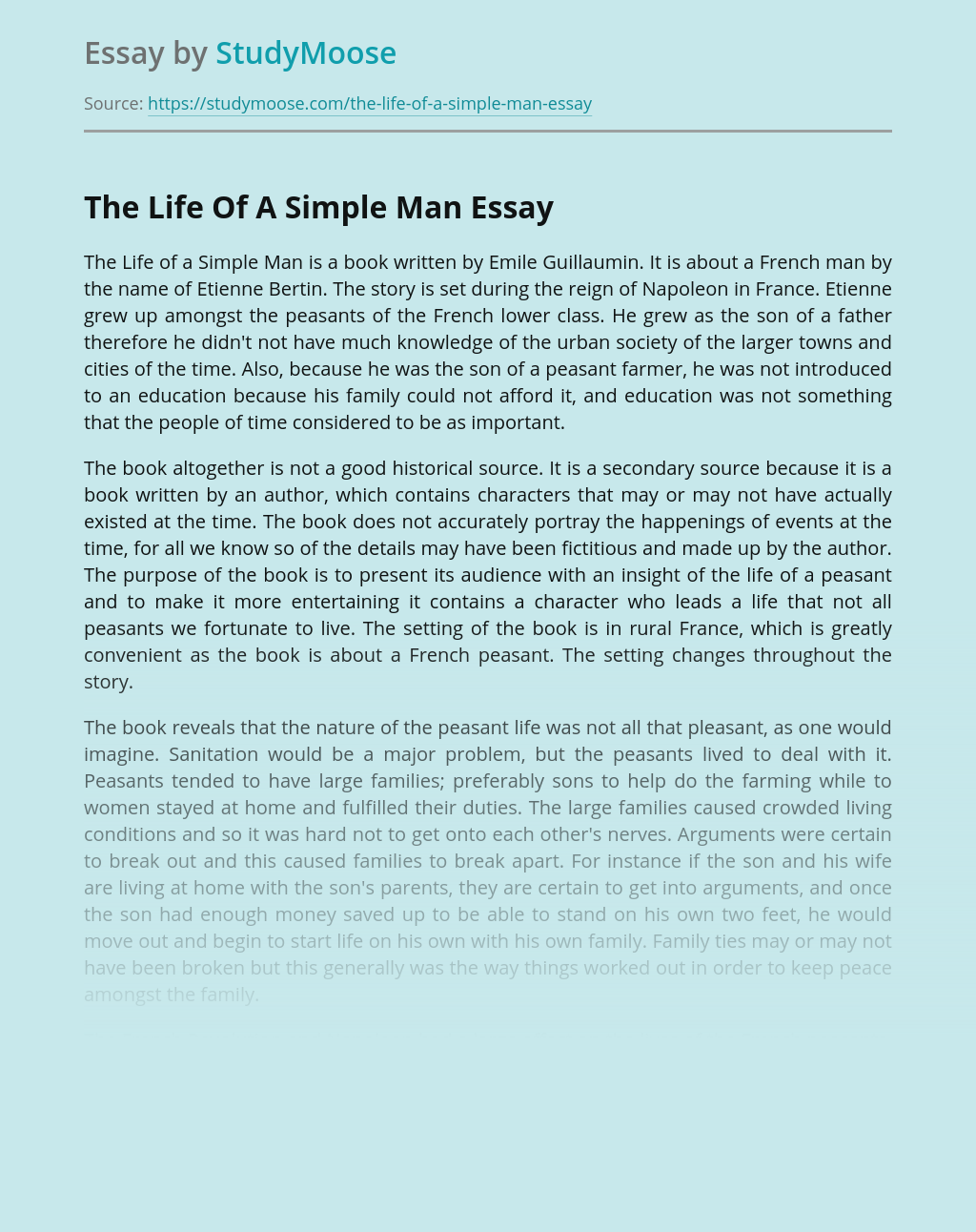 Don’t waste time
Get a verified writer to help you with The Life Of A Simple Man
Hire verified writer
$35.80 for a 2-page paper
Stay Safe, Stay Original