The Influence of Media is Connected to Negative Body Image

Joel Yager, a Medical Doctor, said “Every society has a way of torturing its women, whether by binding their feet or by sticking them into whalebone corsets. What contemporary American culture has come up with is designer jeans” (qtd. in Derenna, Beresin 257). The impressions of people are merely based off what they see on social media platforms, good or bad. These impressions often reduce their confidence and lowers their self-esteem. In today’s world, the impact of media has skyrocketed, which cannot be ignored.

Don't use plagiarized sources. Get your custom essay on
“ The Influence of Media is Connected to Negative Body Image ”
Get custom paper
NEW! smart matching with writer

Adolescent’s lives revolve around their cellular devices, so what’s being seen on social media is almost impossible to escape. Social media not only affects what people do, but also affects how they see themselves. Society needs a more positive outlook on body image, rather than face a disorder that can change one’s whole life. Negative body image can result from the media, with photoshop, editing, fad diets, and society’s look at the perfect body.

Negative body image can lead to dangerous eating disorders, such as bulimia and anorexia.

Advertisements play a big role in day to day life, they consume everybody whether it be on television, the newspaper, or a magazine. Advertisements in the media influence people more than they are aware. “Although much more attention had been paid to the cultural impact of advertising in recent years than ever before, just about everyone still feels personally exempt from its influence” (Kilbourne 107). Even if the general population of men and women think they are happy with their bodies, they’re not because they’re constantly reminded that their bodies aren’t big enough or skinny enough from the advertisements.

If there wasn’t such an influence from advertisements, men and women wouldn’t feel the need to look a certain way to satisfy themselves. Before television made its way to the Fiji Islands in 1995, nothing was able to influence the island people of their body image. “Until that time, Fiji had no reported cases of eating disorders, and a study conducted by anthropologist Anne Becker shower that most Fijian girls and women, no matter how large, were comfortable with their bodies” (Bordo 259). With the lack of social media, people in the Fiji Islands had nothing to compare their beautiful bodies to. “In 1998, just three years after the station began broadcasting, 11 percent of girls reported vomiting to control weight, and 62 percent of the girls surveyed reported dieting during the previous months” (Bordo 259).

Before advertisements blasted through the televisions in family homes, or even made it to the internet, negative body images have always declared their existence in women in the early years. Throughout decades, women have always been influenced by someone or something to have the perfect body shape and size. “Throughout history, the standard of the female beauty often has been unrealistic and difficult to attain” (Derenne, Beresin 258). The ideal body throughout history was based off deeds that the women needed to do. In the 1600s, all members of a family were to contribute to survival, having meat on their bones. “However, in the 19th century, ideals shifted and women with tiny waists and large bustles came to be valued. It was desirable for an upper-class man to be able to span a women’s waist with his hands” (Derenne, Beresin 258). Women have been taught that being desirable to a man is an accomplishment, and that his approval of a certain body type was to always be obtained, which was sometimes difficult for women. During WWII, ideals for women had changed once again. “Again, society valued competent, strong, and physically able women” (Derenne, Beresin 258). This relates to how advertisements often turn people into objects, women had to look the way men want. “The self-esteem of girls plummets as they reach adolescence partly because they cannot possibly escape the message that their bodies are objects, and imperfect objects as that” (Kilbourne 108).

Advertisements have a way of promising consumers with a love that they desire. For example, a young girl, not happy with their body, might see a commercial with a celebrity promoting a weight loss plan. The young girl is sure that she will become skinny using this product just because this well-known celebrity did. “The problems with advertising isn’t that it creates artificial needs, but that it exploits our very real and human desires” (Kilbourne 107). Advertisements know exactly what people want to see, so they showcase exactly that. A pill won’t make you skinny just by taking it, but that is what the advertisement wants you to think.

Advertisements in today’s media have one purpose, and that purpose is to sell an item. When it comes to selling an item, everything needs to be perfect. These advertisements might slip a thin model into a clothing magazine for a top-notch designer. This designer uses a thin model because he/she might think clothing looks better on thinner people. Young men and women look through these magazines thinking they can’t wear a certain top or bottom because they aren’t skinny enough, or won’t look as good in it as the model. This younger generation thinks that being model-thin is what they are supposed to look like. Advertisements in today’s media creates a standard of a beautiful body. “She can’t shake her mind free of the “Lady Marmelade” video from Moulin Rouge. Christina Aguilera, Pink, L’il Kim, and Maya, each one perfect in her own way: every curve smooth and sleek, lean-sexy, nothing to spare” (Bordo 258). Men and women look in the mirror and often realize they don’t fit into the category of every curve smooth and sleek, lean-sexy, and nothing to spare so the result of self-hatred and shame burn into the heads of young adults. Their stomachs aren’t flat enough, their thighs are too jiggly, and their butts are too big.

From an outrageous amount of influence media has on this generation, the health of Americans is declining to obtain this praised, thin figure. “According to the American Obesity Association, 65% of adults and 30% of children are overweight” (Derenne, Beresin 257). “At the same time, rates of some eating disorders in women, such as anorexia nervosa and bulimia nervosa, are rising” (Derenne, Beresin 257). The idealized rail-thin figure is likely relevant from the media’s pressure to maintain a healthy lifestyle by eating nutritious-filled foods and daily amounts of exercises. “Dietary restrictions lead to repetitive pattern of self-deprivation, which can result in bingeing, weight gain, and worsening self-image” (Derenne, Beresin 257).

The media tells us how men and women should look, creating a perfect “it” girl. “In today’s world, it is through images-much more than parents, teachers, clergy-that we are taught how to be. And it is images, too, that teach us how to see, that educate our vision in what’s a defect and what is normal, that give us the models against which our own bodies and the bodies of others are measured” (Bordo 260). When men and women check their social media platforms everyday they are surrounded by images of beautiful women and handsome men that they wish they could be like. The current media is very complicated and confusing, telling women that we can and should “have it all” but it takes time to get there. The reality behind media is that photos are airbrushed, photoshopped, and expensive computer programs are used to create the perfect figure out of a non-perfect figure. So even when people think a model in a magazine has perfect skin, flat stomach, and non-jiggly legs that might not be the case. “She felt that women should know that the figures portrayed by the media are rarely real” (Derenne, Beresin 258).

The dissatisfaction of body image among men and women has increased from the influence of social media. While media praises the thin model and the famous celebrity, today’s society is always comparing their bodies to these models and celebrities. The “perfect” body is idolized so much to the point that people think it’s the only body shape and size that is acceptable. Men and women are suffering from negative body image from the media that can cause negative effects to the body such as eating disorders.

The Influence of Media is Connected to Negative Body Image. (2021, Apr 22). Retrieved from http://studymoose.com/the-influence-of-media-is-connected-to-negative-body-image-essay 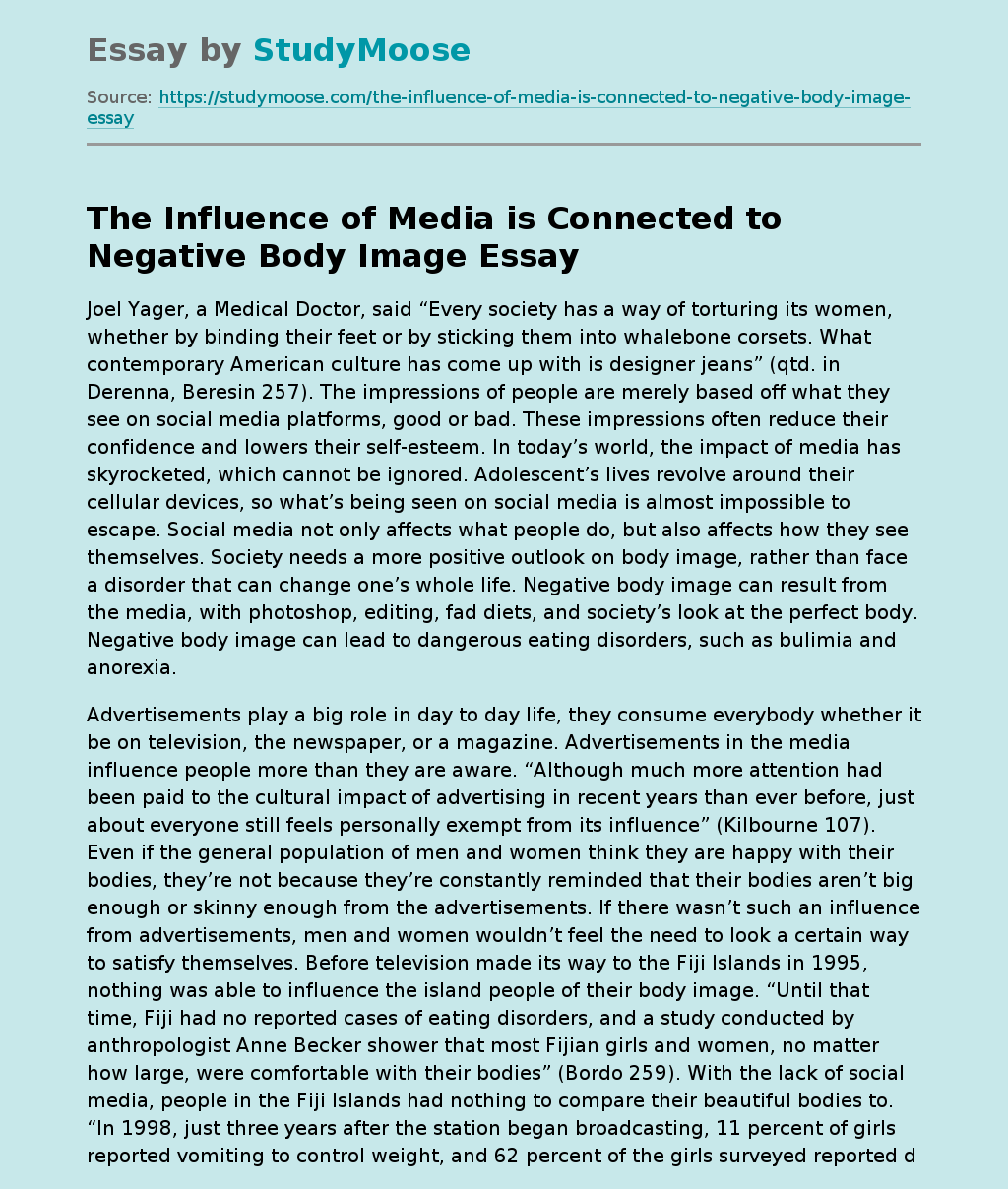