The Importance of the Act of Reading” by Paulo Freire essay

I”The Importance of the Act of Reading” by Paulo Freire, describes the importance of the act of reading beyond numerous experiences in his life as a child, a teenager, and an adult. Freire begins his article by taking readers back to where he was born, in his home city Recife, Brazil. He uses very itemized imagery to describe the trees, the house and the atmosphere of where he grew up and how the text, words, and letters were incarnated in the series of things, objects, and signs.

Don't use plagiarized sources. Get your custom essay on
“ The Importance of the Act of Reading” by Paulo Freire essay ”
Get custom paper
NEW! smart matching with writer

He describes the trees, the house and the atmosphere of where he grew up and how the text, words, and letters were incarnated in the series of things, objects, and signs. He identified how the trees he used to play on were just like people, and prepared him for risk and adventure. He relates that that house he grew up is where little meaningful things would occur such as his first steps and first spoken words.

He describes, in detail, the atmosphere of where he grew up including: the weather, the animals, the flowers, and the geography features surrounding his home, and the fruit &vegetables in the gardens outside. Through re-examination of his memories of childhood, Freire demonstrates that it is possible to view experiences and objects as texts, words, and letters and to gain knowledge of the world. He insightfully compares his recollections to a type of reading style, where a reader learns and fluctuates before actually reading.

The text, words, and letters would take on imageries of Freire’s world and the more he perceived the images, the signs would emerge to him.

It was when Freire started school that a teacher showed him that reading words, phrases or sentences never entailed a break with reading the world, but as to reading the word meant reading the word’s-world. Freire compares the ways in which experience itself is read through communication of the self and the world. From reading Paulo Freire’s “The Importance of the Act of Reading,” and E.D. Hirsh’s “Cultural Literacy,” I support that rather than just reading the text, letters, or words, reading should be preceded by and linked with knowledge of one’s existential experience of their world to relate and grasp a better understanding of the text. In addition, I suspect that students do not always obtain and comprehend all the life’s lessons within literature that they are tasked to learn and read in a school system’s curriculum.

Freire is conveying in both a conventional context of literacy and in a cultural, spiritual sense that people learn to read the world within their own personal and worldly context, so we can recapture and better understand the word. Hirsh conveys that there is a decline in our nation’s ability to digest and grasp reading, references and lack of familiarity with things and he portrays an example of this in his article. He devised a study by comparing the effects of two groups similar in age, sex, marital status, education level, and professional specialty, on their reading speed and accuracy of comprehension by giving them familiar and non-familiar letters. Both letters were very similar, except one was about an American wedding, the other about an Indian wedding; both groups read both letters.

Schools often require reading materials containing unfamiliar subjects to students. Recognizing that there is significance for critical understanding of the text itself as well as the act of reading, this explains why many students today struggle with reading material that is not relevant to their lifestyle. Freire portrays that by the statement, “reading the world precedes reading the word, and reading the word implies continually reading the world” (Freire 286). A person should read their world, and then interpret it. They can then use their existential experience of the world to connect to what they are reading in print, and better understand it.

“Reading a text as pure description of an object, and undertaken to mechanically memorize the discrimination, it is neither real reading nor does it result in the knowledge of the object to which the text refers” (Freire 284). When a teacher gives a reading assignment, the students that read to memorize the text likely do not gain the significance of what that literary work contextually attempted to deliver, nor is it necessarily understood by the reader. If a student was really taught the significance and meaning of the text instead of mechanically memorizing it, the student should have better outcomes both with gaining the insight of the assignment and the memorization of key points. Mechanistically memorizing readings and definitions do not always benefit every student or guarantee they obtain the knowledge intended for them to retain. The ability of students to comprehend and connect to what they read has declined in the last two or three generations due to a lack of creative skills within the student. Gaining general knowledge requires, in most American secondary public schools, a very rigid and structured memorization model, in my opinion.

The current system rewards memorization and recall more than creative discussion and unique experiences that differentiate us all. It is a significant challenge for teachers to produce educational assignments and readings that everybody can relate to, and the handicap of years of schooling with de-emphasis on creativity take it’s toll. It seems as if getting an education is about getting learning how to get done. Gone is the concept of “discovery of oneself”. Students are not able to interpret their world when there is only one interpretation that’s considered correct – the mechanistic one the teacher decides is correct! Frieire talks about how students struggle with readings and assigned bibliographies to read, that they’re more devoured than truly read and studied. If teachers are for, say, “slamming reading assignments down students throats,” students are more worried about getting the readings done instead of taking the time to actually understand and study it, similar to “scientific training,” as Freire puts it.

I agree with what Freire is stating because I can relate to the fact that was my situation in high school. Every year in high school I always had assigned readings that were entirely unfamiliar to me. I never really wanted to read because they did not sound interesting, but of course I read them anyway. Now that I consider Freire and Hirsch’s viewpoints, I realize I could not relate to any of my readings because I allowed myself to be conditioned to only be interested in what I was already interested in! That is to say, I was not very open to using my imagination when forced to read Jules Verne. I never used my knowledge of history to integrate creatively when reading Salinger’s “Catcher in the Rye”. However, Cosmopolitan magazine quite often had short articles that were relevant to me and my friend’s social lives, so I chose to read that instead. If we are to change this for future generations, an understanding of what these essays both mean is necessary, and conceptual applications to the educational and social system is critical.

The Importance of the Act of Reading” by Paulo Freire essay. (2016, Aug 08). Retrieved from https://studymoose.com/the-importance-of-the-act-of-reading-by-paulo-freire-essay 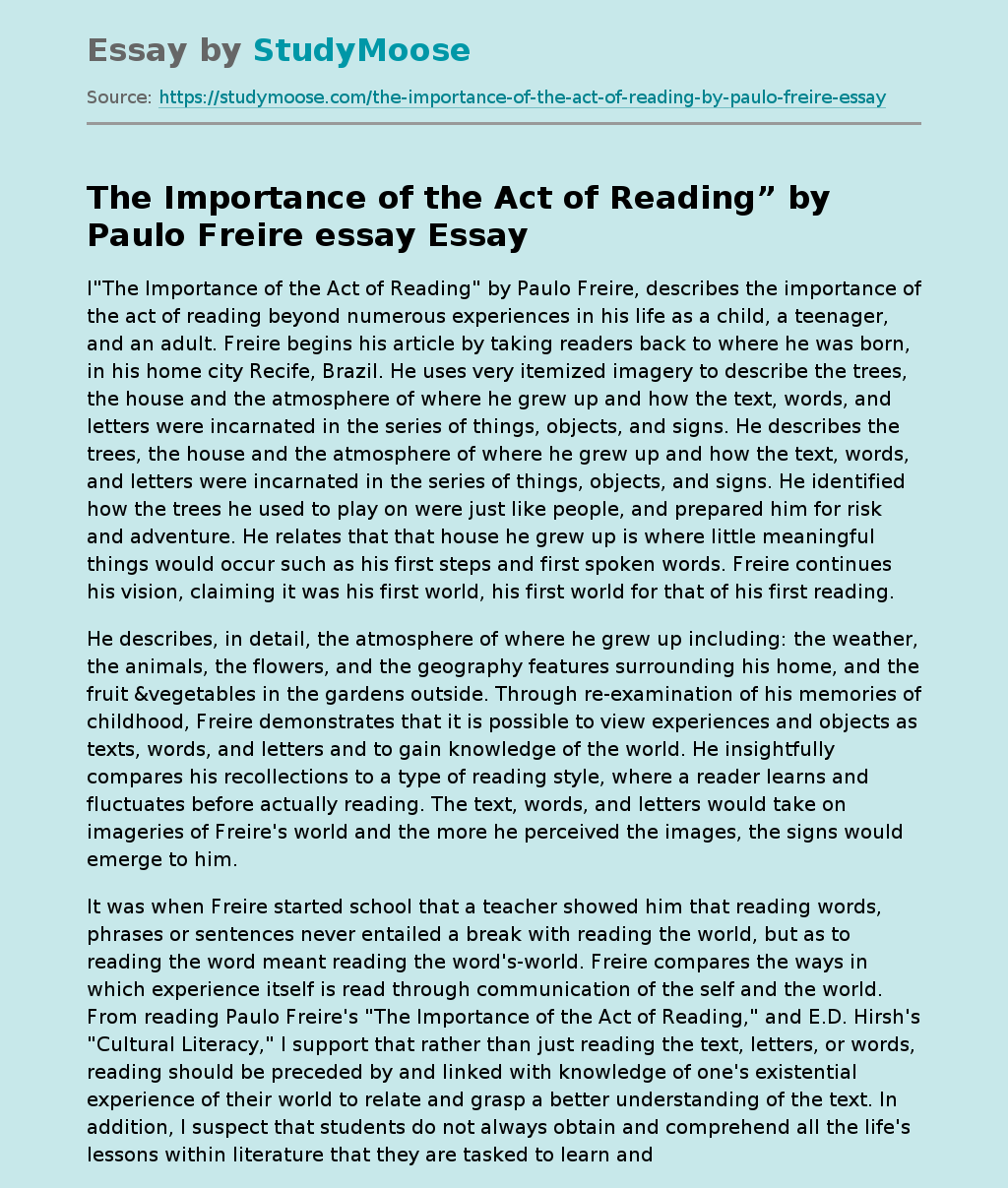