Analysis of Santiago in "The Alchemist" by Paulo Coelho

Within the novel, The Alchemist written by Paulo Coelho, a young man named Santiago from Andalusia, Spain is guided through his quest to find hidden treasure amongst the mysterious foreign land of Egypt’s deserts. In interpreting omens from the universe, Santiago finds it within his soul to complete his Personal Legend and uncover his purpose of existence with the assistance from unique characters in addition to symbols, geography and irony. Such topics are analyzed through chapters 12, 19 and 26 from the text, How to Read Literature Like a Professor Revised Edition by Thomas C.

Don't use plagiarized sources. Get your custom essay on
“ Analysis of Santiago in “The Alchemist” by Paulo Coelho ”
Get custom paper
NEW! smart matching with writer

Foster as he reveals common techniques adapted by authors throughout literature. In Chapter 12-“Is That a Symbol” Foster describes the importance of one’s individualistic interpretation to comprehend symbols. He acknowledges that there is a gray area when it comes to symbolism because our diverse backgrounds and ideologies all affect the way we perceive a message. Foster states, “… factors will inevitably influence what we understand in our reading, and nowhere is this individuality clearer that in the matter of symbolism” (Foster 110).

Foster continues to emphasize the endless possibilities that symbols hold and how they carry monumental power in literature. The symbols within The Alchemist are no different. In the very beginning of the text Santiago reveals that he has been having a recurring dream. When he recalls the events leading up to his dream, an essential symbol is exposed. Coelho states, “The roof had fallen in long ago, and an enormous sycamore had grown in the spot where the scarcity had once stood.

He decided to spend the night there” (5). Sycamore trees play an important role in many pieces of literature. For instance, in the New Testament, the sycamore tree is a symbol of clarity. Since Santiago experiences his dream beneath this tree, it symbolically represents the clarity within his own psyche.

The universe is guiding him to his treasure and that is made clear with the sycamore tree. The sycamore tree is also referenced within the Egyptian work known as the Book of Death which demonstrates the connection that ancient Egyptians had with nature. With this information at hand, it becomes evident that the sycamore tree carries another symbolic meaning which is to show the deep connection that every soul on earth shares. Towards the end of the text when Santiago finally arrives to the pyramids, the robber states “I had a recurrent dream too…In my dream, there was a sycamore growing out of the ruins of the sacristy…if I dug at the roots of the sycamore, I would find hidden treasure” (Coelho 166-167). The roots of the sycamore symbolically show the connection that Santiago makes with both the world and Egypt. The sycamore tree shows the versatility that symbols can posses. The tree sparks Santiago’s adventure to branch out into a new world while also providing clarity that allows him to see the world with a clear lense.

In Chapter 19, “Geography matters” from How to Read Literature Like a Professor Revised Edition, Foster emphasises the power that location and geography has in literature. Geography is not merely a background image for a scene. Location affects the actions and events within a story because the characters particular placement creates specific obstacles. The change in location as described by Foster is sometimes necessary for a character to discover who they truly are meant to be; geography poses challenges that allow characters to reinvent themselves and escape their old lives. Foster states, “…, when writers send characters south, it’s so they can run amok” (179). For Santiago, he literally heads south from Spain to Africa in search of hidden treasure. The moment Santiago steps into Africa, he begins to have new experiences as he adapts to a new culture. Each encounter brings Santiago closer to completing his goal and fulfilling his Personal Legend. One of the initial obstacles that Santiago faces is the culture shock of this new world.

The glass merchant whom is first introduced on page 47 assists Santiago by giving him a job, helping him learn Arabic and assimilate into society. The narrator states, “He was going to miss the place and all the good things he had learned. He was more confident in himself, though, and felt as though he could conquer the world” (Coelho 65). It was the boy’s new found confidence and knowledge of the unfamiliar world that built the courage within him to withstand the unyielding and unfamiliar desert. The journey to reach the Egyptian pyramids will be long and exasperating but not even the forces of nature will stop Santiago from completing his mission. Coelho states, “But all of this happened for one basic reason: no matter how many detours and adjustments it made, the caravan moved toward the same compass point. Once obstacles were overcome, it returned to its course…” (77-78). The determination within the caravan is reflected by Santiago’s same willingness to overcome his obstacles both physically and internally. The stubbornness of the desert is meant to inflict challenges for Santiago. Without the rigid landscape, there would be no plot or conflict; Geography therefore becomes the backbone of this text.

Chapter 26, “Is He Serious and Other Ironies” helps clarify the intriguing ironies within The Alchemist. Foster states, “That’s irony-take our expectations and uphold them, make them work against us” (255). The most dumbfounding irony within the alchemist was that the hidden treasure that Santiago was looking for in Egypt was in fact not in Egypt at all. The little boy in the dream, the dream interping Gypsy, the King from Salem and the alchemist all motivated Santiago to head to Egypt in search of the lost treasure and to everyone’s surprise, the treasure was not where it was expected to be. When Santiago finally made it to the great pyramids of Egypt he is attacked by two travelers and robbed. In an attempt to save his life once again, he exposes that he is looking for treasure in the very spot they are standing because of his recurring dream. The traveler then states, “‘… I had a recurrent dream, too. I dreamed that I should travel to the fields of Spain and look for a ruined church where shepherds and their sheep slept…’…now he knew where his treasure was” (Coelho 167-168).

The treasure was located in his own homeland all along. Some may say Santiago wasted so much of his time looking for the treasure in the wrong location, but the real treasure was not the monetary wealth that came with ancient riches. Santiago’s dream was to travel and see the world and he did just that. The irony of this situation is emphasised when Santiago’s father states, “‘People from all over the world have passed through this village, son’ said the father. ‘They come in search of new things, but when they leave they are basically the same people they were when they arrived’’’(Coelho 11). This is certainly not true for Santiago. When he leaves Spain for the second time, he is a completely new person with exotic life experiences, a new outlook on life and of course he now has treasure.

Analysis of Santiago in "The Alchemist" by Paulo Coelho. (2020, Sep 10). Retrieved from http://studymoose.com/analysis-of-santiago-in-the-alchemist-by-paulo-coelho-essay 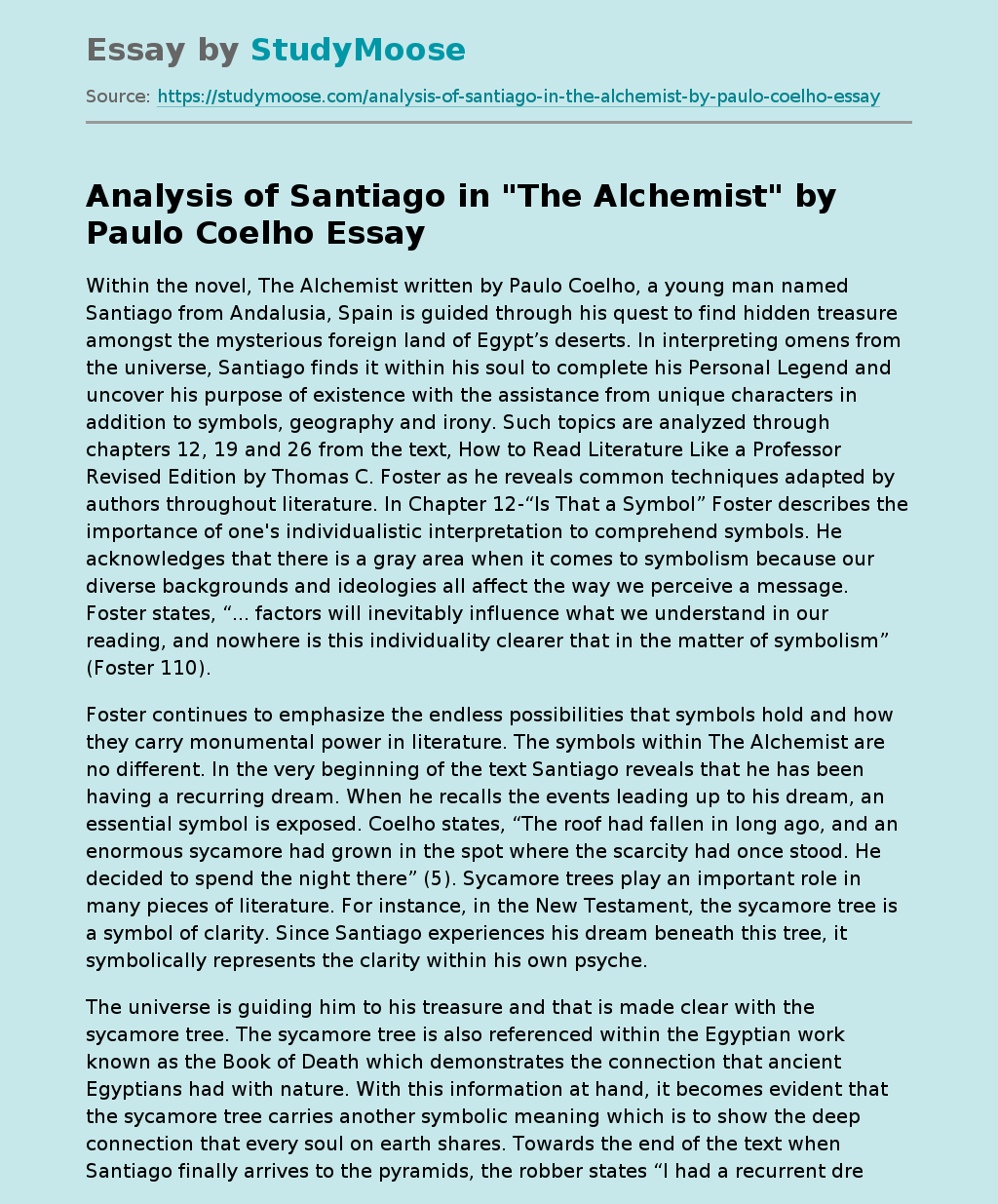