The Human Cost of an Illiterate Society Essay

Jonathan Kozol is an American author, professor and activist. He is 76 years old. He spent his childhood in Boston, Massachusetts. In 1958, Kozol earned his Bachelor of Art (B.A.) degree in Harvard University and was offered a Rhodes scholarship. However, he declined it and moved to Paris, France in 4 years. He began to write “The Fume of Poppies” (1958). After that, Kozol moved back to the United State to participate in “the civil rights movement and issues of social justice” enthusiastically. “The Human Cost of an Illiterate Society” is a part of “Illiterate America” which was released in 1985.

Don't use plagiarized sources.
Get Your Custom Essay on The Human Cost of an Illiterate Society Just from $13,9/Page

It is very persuasive and effective essay that showed the fact of people without literacy have lower quality of life and how they deny their rights and their interests in the society. They don’t have enough knowledge in writing and restrict their abilities in written world. Illiterates will be automatically eliminated from modern world. Kozol is skillful and talented when using many credible sources and quotations to persuade the readers and attracted them into his article.

At the beginning of the article, Kozol mentioned how American government faces with the effects and dangers of an illiterate society. The number of illiterate adults was increasing and created many issues for their countries. He equated these problems as “a farce or a tragedy, or perhaps both” because people without literacy cannot make their own knowledgeable decisions about important documents or controversial news. Furthermore, they can be given the high signs to their benefits because of bellicose voter education or “more frequently, they vote for a face, a smile, or a style, not for a mind or character or body of beliefs” (253) since they are outdated. These were the reason why “illiterate citizens seldom vote”: more than 60 million people who are significantly refused to participate in democracy (253). They gave their rights and their opportunities away. Illiterate is a threat to government. After showing the effect of illiteracy on politic field, Kozol provided many evidences and instances to prove another his point of views. He “drew a picture” about the illiterates’ daily lives to show to the reader “millions of adult illiterates experience each day within the course of their routine existence in the U.S.A” (254).

The illiterates are unable to read school letters that their children emailed them. They cannot even follow directions of ethical drugs on a bottle or read and sign in the contracts to live in an apartment; they also cannot go or take journey freely by their own ways. The illiterates can easily make mistakes in every single day. All of these reasons are commonsense. They will not only contribute many bad effects for themselves but also for the government and society. Kozol went from general to specific reasons; he used logic and critical reasoning to appeal to the intellect. The words he used were very persuasive such as “illiterate Americans must trust somebody else: a friend, a relative, a stranger on the street, a grocery clerk, a TV copywriter” (257). One of the best arguments that he wrote was: “You don’t know where you are…You’ve lost” which is very meaningful and realistic in our modern lives in 21st century. According to The Impact of Illiteracy of National Adult Literacy Survey, 23% of the adult American population is basically unable to read and write (estimate around 40 or 44 million).

They are deficient in general skills before a fourth-grade level. There are 40% of the working classes in the United States have the circumscribe skills. Every year, American commercial enterprise loses more than $60 billion in capacity to employees who are deficient in basic skills. Moreover, adult illiteracy also costs society an estimated more than $240 billion per year due to many cases such as: productivity reduction industries, un-realized tax incomes, social benefits or malfeasances, living in penury and related social illnesses or diseases. All these statistics make people have to think about the problem and figure out ways to help themselves. Kozol was very clever when linking experiences of the illiterates with the social issue. It made his article objective and engaged the readers. The tone was passion and informal but serious. Besides defining some new terms and phrases, Kozol also evaluated the problems, provided reasons and gave solutions such as: “Democracy is a mendacious…our electorate” (253) or “Not knowing the right word…is a form of subjugation” (257).

He also showed many examples and evidences to prove his ideas. The readers can see how actual they are in every single day. Kozol wrote very well that his article became a vivid issue to everybody. But sometimes, he uses some academic terms and words like “Socrates’ belief”, “stigmatized” that make them hard to understand. Besides, he mentioned about politic at the beginning of the article “The Human Cost of an Illiterate Society”; if someone doesn’t interested in that field, he or she will not keep reading to see what the author wrote about next.

In conclusion, illiteracy is a common and widespread- an issue in every society and countries, especially the undeveloped or poor ones such as Africa, Vietnam and China. It is absolutely not limited to any pedigree, area or social-commercial class. It is not only government but also all of us should think about problems in “The Human Cost of an Illiterate Society” (252). We are human beings. We have to act immediately to change our lives, especially the illiterates. Government should find solutions or pass more new laws and create opportunities to help the illiterates. It is the parents’ duty to encourage their children go to school to avoid illiteracy to make a better world.

The Human Cost of an Illiterate Society. (2017, Jan 08). Retrieved from https://studymoose.com/the-human-cost-of-an-illiterate-society-2-essay 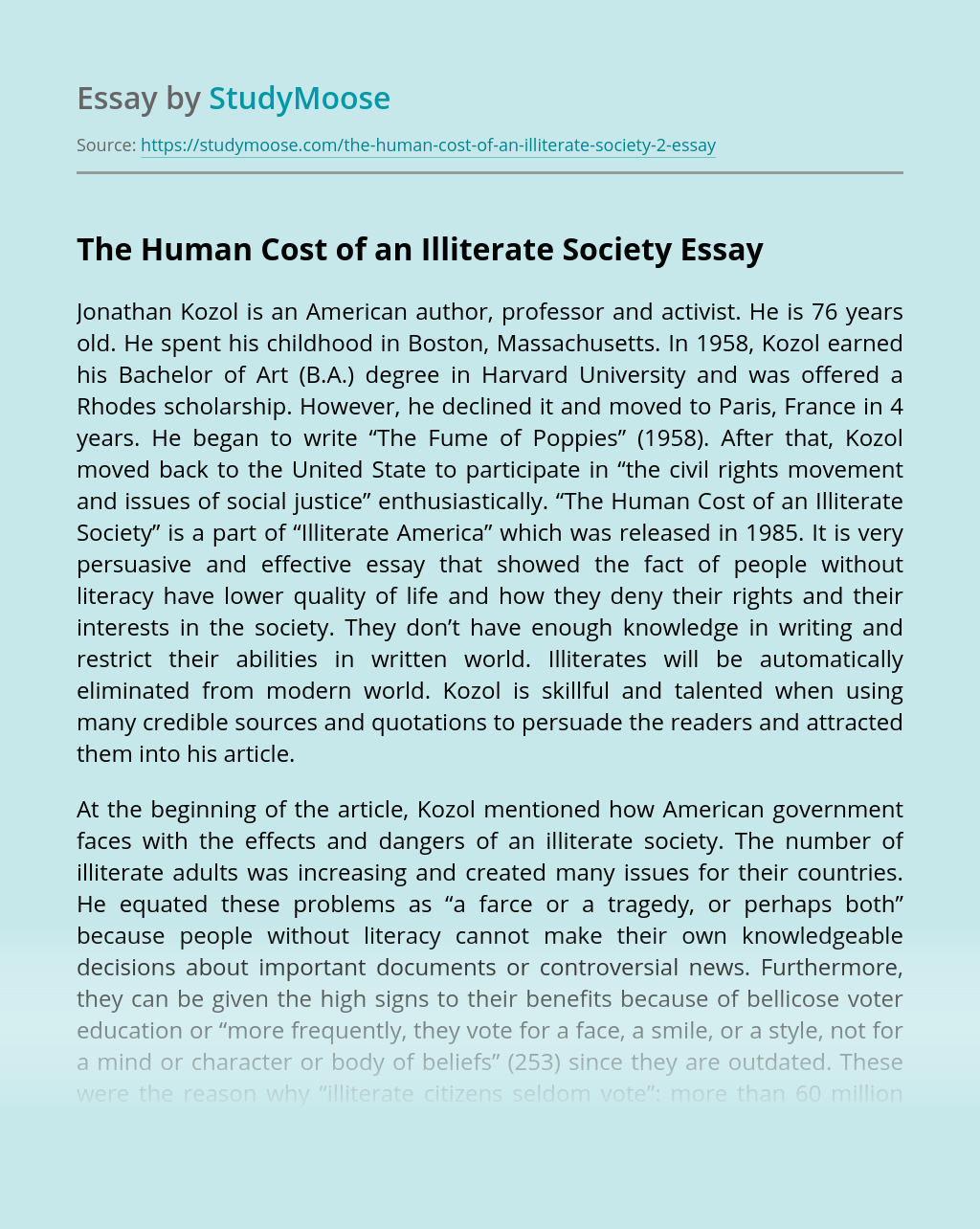 Conditions and Consequences of a Price War

The goal of this essay is to “use economic theory and illustrative examples to detail the situations under which a rate war could come about and the most likely effects for the participating firms and their consumers”. A price war is a period in which several firms contending within the same market will respond to... VIEW ESSAY

The increasing complexity of today’s business environment makes it virtually impossible for most firms to be controlled centrally. Decentralisation is a necessary response to this increasing complexity and involves the delegation of decision-making responsibility by senior management to sub-ordinates. The structure is such that decision making is dispersed to various units within the organisation, with... VIEW ESSAY

Whitening Soap have the distinct smell and have usually and orange color. Papaya also contains enzyme that will give our skin more refreshing. Papaya soap contains three main ingredients; papaya extract, papaya juice, and pulp. The three ingredients will be combine during the soap manufacturing. Vitamins C and A are highly concentrated in most papaya... VIEW ESSAY

The products of Scientific Glass include customized and specialized glassware for a variety of organizations such as pharmaceutical companies, hospitals, research labs, quality-control sites and testing facilities. By January 2010, a substantial increase in their inventory balances tied up the capital needed for investment for expansion. The debt-to-capital ratio exceeded the 40% target preventing the... VIEW ESSAY

A general model of organizational control includes four components that can operate in a continuous cycle and can be represented as a wheel. These elements are: 1. Setting a goal. Project goal setting goes beyond overall scope development to include setting the project baseline plan. The project baseline is predicated on an accurate. Work Breakdown... VIEW ESSAY