The Hidden Damage of Solitary Confinement

Don't use plagiarized sources. Get your custom essay on
“ The Hidden Damage of Solitary Confinement ”
Get custom paper
NEW! smart matching with writer

These people are generally held in a small prison or jail cell or approximately 23 hours per day, and have limited contact with other people, along with having limited physical amenities and other treatment services. Offenders that are considered to be general population are considered to have greater access to the amenities and general privileges. The use of Solitary Confinement is partly used with the mindset of being a punishment and or retribution; however, Solitary Confinement has been seen to also be used to meet the various goals of rehabilitation, incarceration, and as a deterrent.

In theory, there is a belief amongst members of law enforcement and policy makers that solitary confinement is a successful approach in order to maintain order, promote control, to discipline, and to maintain safety (Shalev, 2008). However, there is also the belief amongst the same individuals that solitary promotes the likelihood of successive institutional misconduct, makes correctional facilities less safe, and causes mental health issues amongst offenders (King, 2019). Despite the fact that solitary confinement has been a method that is widely used amongst the United States criminal justice system, it has remained an intangible topic amongst corrections.

It is of critical importance to determine is solitary confinement is an effective strategy amongst correctional institutions to deter crime, and make institutions safer.

In the late 1900’s solitary confinement began to resurface across the United States correctional system. Researchers relate the resurfacing of solitary confinement to “tough on crime policies (Smith, 2006).” These various tough on crime policies led to African Americans being disproportionately incarcerated; with mass imprisonment being a result, law enforcement officials sought ways to maintain order and maintain safety. During this time, it was also believed that rehabilitation does not work. Despite these notions, most research conduct amongst researchers has come to similar conclusions, that there can be psychological consequences resulting from solitary confinement (Metzner & Fellner, 2010).

Across the United States correctional institutions that are designated to isolate offenders are commonly utilized. These areas are commonly referred to as Maximum security housing (MHU) or secure security housing/ super maximum security housing (SHU). At the creation of the correctional system, both the Auburn system and Pennsylvania system was adopted (Barnes, 1921). The Auburn system is designed around a congregate system where offender was together for various activates such as work and eating; however, these offenders went to isolation at night. Floggings were used as the primary way to discipline (Barnes, 1921). The Pennsylvania system however, was centered on offenders being isolated to focus and reflect on the crime that they committed. Within confinement, offenders have very limited human contact and social interaction; however, isolation has been viewed as a rehabilitation method and an opportunity for law enforcement to control and monitor offenders. Conversely, researchers suggest that limited environmental and contact can have great potential risks such as mental deterioration (Grassian, 2006).

Various studies have also shown that those individuals that do time in solitary confinement are more likely to commit crimes once returning to their communities’ verses those who spend their entire time in general population (Morgan, 2018). The American Civil Liberties Union of Texas Civil Rights Project conducted a study in 2015 where they reported that those individuals released from solitary confinement were more likely to be arrested than other offenders (Bennett et al., 2019). In 2006, of all the offenders whom were released for prisons in Texas, 48.8 percent were rearrested within three years of their release. 60.8% of those that served time in solitary confinement were rearrested within three years of their release. A similar study was conducted in 2007 within the state of Washington where they found that higher felony recidivism rates were amongst those offenders who were directly released from a SHU compared to those within general population (Bennett et al., 2019). Lastly, various researches have suggested that the use of solitary confinement does not only increase recidivism amongst offenders, but it may also lead to an increase in violent crime. A study conducted in Florida in 2009, showed that supermax or solitary confinement incarceration may increase violent recidivism (Morgan, 2018).

The Hidden Damage of Solitary Confinement. (2019, Dec 01). Retrieved from https://studymoose.com/the-hidden-damage-of-solitary-confinement-essay 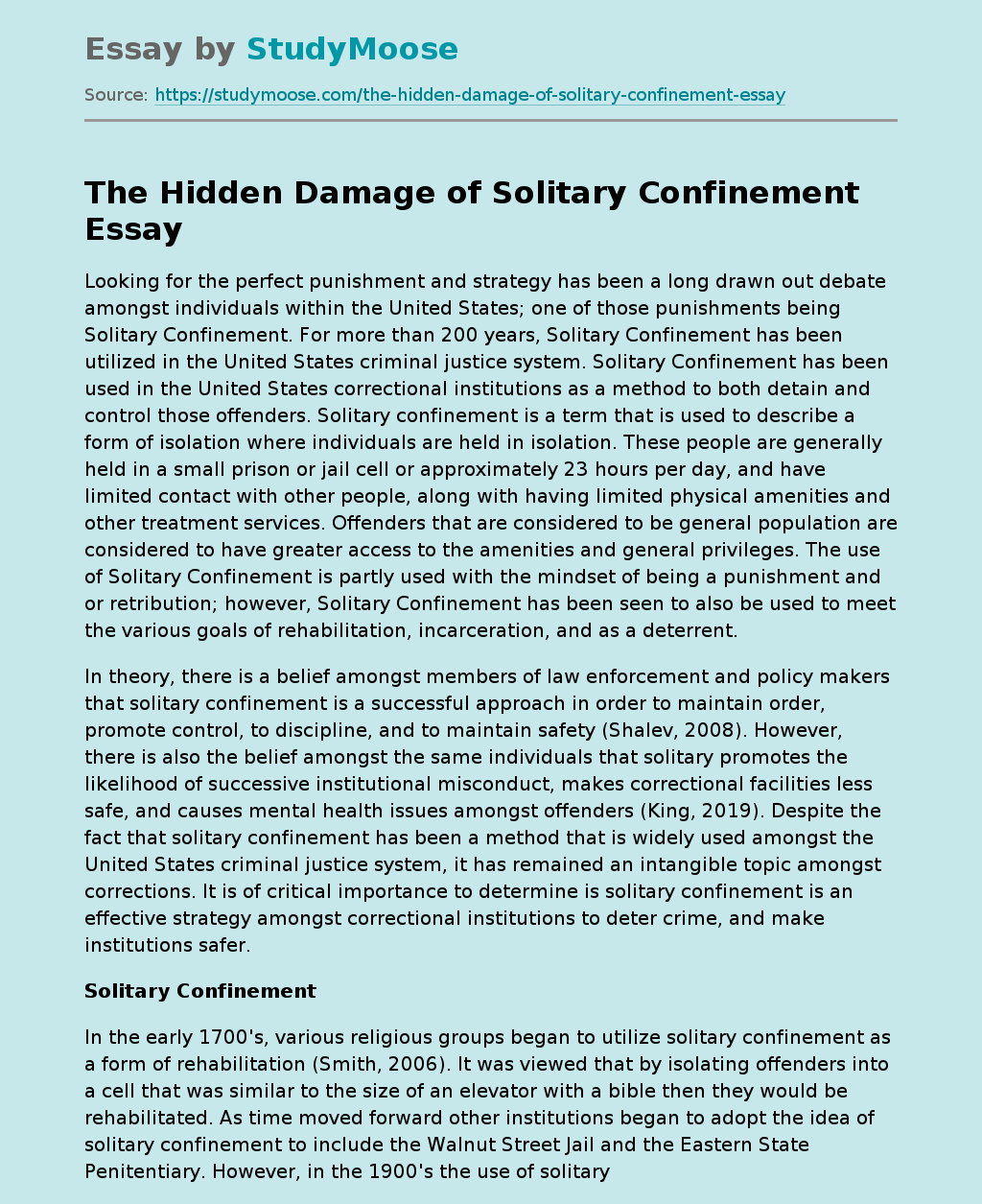