"The Solitary Reaper" by William Wordsworth

“The Solitary Reaper”, is a poem divided in four different stanzas, and each stanza has eight lines. Throughout the course of the poem Wordsworth’s voice evolves from being an outsider voice into an insider voice; simultaneous, to the evolution of the voice, Wordsworth uses different ways and means to present the spokesman by itself as an emerging voice, which responds to each changing situation. And the poem will flow from an outside perspective into the inside perspective.

From the beginning of the poem, Wordsworth establishes a relationship with us, his audience and readers, which is as important as the relationship he has with the lady.

Turn in your highest-quality paper
Get a qualified writer to help you with
“ “The Solitary Reaper” by William Wordsworth ”
Get high-quality paper
NEW! AI matching with writer

In other words Wordsworth is to the Scottish lass, as we are to him.

In the first two stanzas Wordsworth is going to emerge as an outsider voice. In the first stanza, the author let us know about the Scottish lass, who is working on the field at the same time that she is singing with sadness.

But the notes produced by her chant are flowing all over the profound valley. The way it is written gives the feeling that the lass’ voice is going to be heard any minute and enjoy it in the same manner as Wordsworth is starting to re-create the beauty and the strength of her voice.

Also, in this first stanza we — his audience — receive three open commands from Wordsworth, which integrates us into the poem, and maintain our attention into it. The author’s command are open because as readers we can not respond directly to him, we just continue reading the poem, which might be Wordworth’s objective.

In the second stanza, as an outsider voice, Wordsworth fully re-creates the beauties of the chant. And Wordsworth reaches his goal using the comparison as the means of transportation, comparing the maiden’s song with a Nightingale and the newness of the notes and their unique quality. Wordsworth takes us to the extent of our imaginations by saying that it was as exotic, and as far as the sands of the Arabian desert, reminding us — the poet — of the woman’s incredible voice, as graceful as a Cuckoo-bird. Up to this point we — the readers — are listening in our imaginations what the poet transmitted us while he was re-creating the maiden’s chant.

In the third stanza, and in the fourth line, is when Wordsworth make the transition emerging as an inner voice, because the poet mentions a personal and emotional conflict that Wordsworth faced, and he questions himself if the battle was humbly fought or not. And the in the last two lines of this stanza, the poet starts to questioning and speculating about the maiden’s pain, which could Wordsworth pain reflected in the lass’ song.

In the fourth stanza Wordsworth states that whatever might be thrilling to him might not be for the maiden. Also the author stops questioning the reader, and describes his thoughts while he is watching the lady. And we -the readers — will realize that Wordsworth has become the lass, as the writer who is writing the poem. Therefore, Wordsworth is using the maiden as a gate that opens and let his deepest emotions realize into the world as (her) music, because music can express all those feelings that words can not. And again, if relate the last two lines of the previous stanza with the last two of this one, Wordsworth states that he is the singer, or the maiden that sings forever more, because he is one the who feels the sorrow, loss, or pain.

"The Solitary Reaper" by William Wordsworth. (2016, Jun 19). Retrieved from https://studymoose.com/the-solitary-reaper-by-william-wordsworth-essay 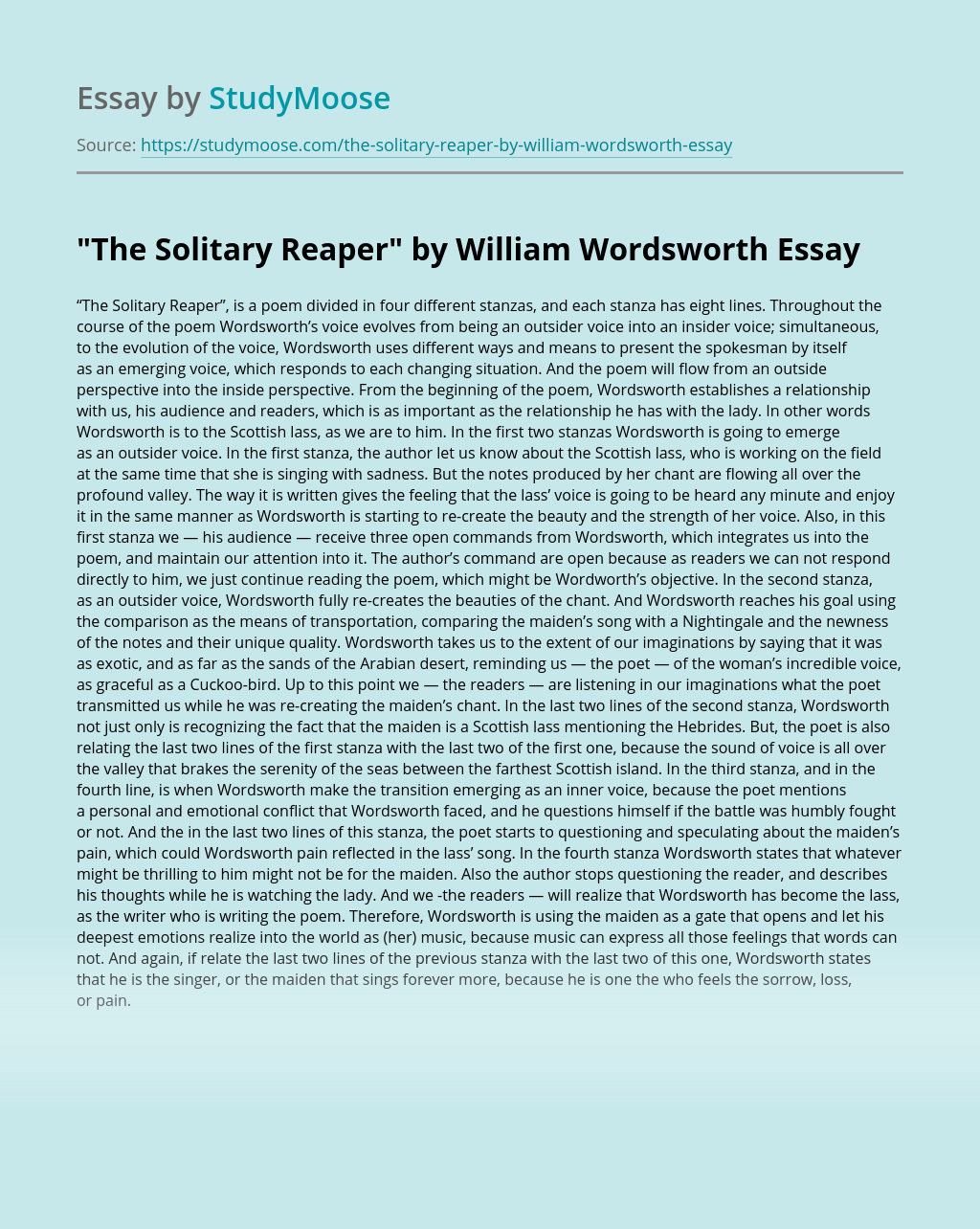 Turn in your highest-quality paper
Get a qualified writer to help you with
“ “The Solitary Reaper” by William Wordsworth ”
Get high-quality paper
Helping students since 2015
Stay Safe, Stay Original