There are many steps of “The Hero’s Journey”. The first step of The Hero’s Journey is the ‘Ordinary World’. The ‘Ordinary World’ allow us to get to know the Hero and identify with him before the Journey begins. This step refers to the hero’s normal life at the start of the story. Next, is the ‘Call to Adventure’ and the hero is faced with something that makes him start his adventure. This might be a problem or a challenge he needs to overcome.

Turn in your highest-quality paper
Get a qualified writer to help you with
“ The Hero’s Journey ”
Get high-quality paper
NEW! AI matching with writer

Following that step is ‘Refusal of the Call‘; when the hero attempts to refuse the adventure because he is afraid. After that is ‘Meeting the Mentor’ which is where the hero encounters someone who can give him advice and ready him for the journey ahead. In the fifth step, ‘Crossing the First Threshold’, the hero leaves his “ordinary world” and starts his journey. ‘Tests, Allies and Enemies’ means the hero will learn the rules of his new world and encounters new challenges and Tests, makes Allies and Enemies .

The ‘Approach’ step is when setbacks occur, sometimes causing the hero to try a new method or approach. The next step is ‘Ordeal’ and the hero experiences a major problem.

‘Reward’ is the step which after the hero survived death the hero earns his reward or accomplishes his goal. The tenth step is ‘The Road Back’; the hero begins his journey back to his ordinary life. ‘Resurrection Hero’ is the step where the hero has a final mission using all he has learned.

The final step is ‘Return with Elixir’. The hero Returns to the “ordinary world”, but the journey is meaningless unless he brings back some “elixir”, treasure, or lesson from the “new world”. The “elixir” is the knowledge or experience that could be useful to all that remain. Shrek is an Epic Hero although most people find the film “Shrek” to be just a comical film; it fulfills the requirements needed to prove that Shrek is indeed a hero. “Once upon a time, there was a lovely princess. But she had an enchantment upon her of a fearful sort which could only be broken by love’s first kiss. She was locked away in a castle guarded by a terrible fire-breathing dragon. Many brave knights had attempted to free her from this dreadful prison, but none prevailed. She waited in the dragon’s keep, in the highest room of the tallest tower, for her true love, and true love’s first kiss.”

This is the opening line of “Shrek” and like nearly all fairytales and many Disney movies it starts with “Once upon a time.” The movie Shrek, is an excellent example of Joseph Campbell’s Hero’s Journey because it’s about an ogre going on an adventure, fighting odds and enemies, winning the battles, and bringing home the prize. In short, the Andrew Adamson and Vicky Jenson film, Shrek, is about an ogre who lives in a swamp by himself and is comfortable living in his ordinary world. He wants to be by himself because he is very insecure about his looks and the way he’s perceived by others. In the swamp he has everything he needs to get by – mud for bathing, slugs for food, and a nearby village he can terrorize when boredom strikes. Shrek’s basic stance toward life is one of isolation; he just wants to be left alone.

On the other hand, in the kingdom of Farquaad, many of the fairy tale characters that we all know including the “Three Little Pigs”, the “Big Bad Wolf”, “Snow White”, and the “Ginger Bread Man” are all being banished. One of the others bound to be banished is a talking donkey that goes by the name, Donkey. Donkey really becomes a great friend to Shrek. While eating, Shrek is horrified when his swamp becomes filled by the banished fairytale creatures, all because of Lord Farquaad. Shrek learns that the only way to get his loved swamp back is to go to Lord Farquaad himself. This marks the hero’s departure on the journey. Shrek is forced to leave his comfortable, self-made environment and explore new territory.

Meanwhile, Farquaad has the special mirror that he took from “Snow White.” He uses it to find himself a princess. The mirror gives him three choices· “Cinderella, Snow White, and Princess Fiona. Influenced by his knights, the prince chooses number three, Princess Fiona. As soon as Shrek arrives at the castle, Lord Farquaad tries to have him killed. After watching the ogre defeat his warriors, Farquaad realizes that the best way to get rid of Shrek is to send him on a quest to rescue Princess Fionna from a vicious dragon. Shrek strikes a bargain with the lord. He agrees to deliver the princess, if Farquaad will allow the fairy tale creatures in Shrek’s swamp to return to their own homes. The battle with the lord’s soldiers and his fight with the dragon must be viewed as the hero’s “first tests”. Shrek has no idea what he’s really getting himself into. He notices the final reward as simply returning to his isolated lifestyle, but his journey will not be that simple.

As he approaches the dragon’s lair, Shrek has to leave the protection of the forest, pass through barren, rocky slopes, and then cross a fiery trench before battling the dragon, the second of his tests. The hero’s main trial comes after Shrek rescues Fionna. He falls in love with her on the trip back to Farquaad’s castle. His affection for the beautiful princess forces the ogre to face his innermost demon: a feeling of ugliness. Shrek, Fiona, and Donkey are almost at Duloc and that night Fiona slept in a windmill. When Donkey hears strange noises coming from it, he finds Fiona turned into an ogre. She explains her childhood curse and transforms each night, which is why she was locked away, and that only her true love’s kiss will return her to her “love’s true form”. Shrek, about to confess his feelings for Fiona with a sunflower, partly overhears them, and is heartbroken as he mistakes her disgust with her transformation to an “ugly beast” as disgust with him. After deciding that she could never love someone so appalling, Shrek abandons Fionna to Lord Farquaad and wanders unhappily back to his home in the swamp.

Luckily, Shrek is accompanied on his journey by Donkey. Donkey serves not only as a sidekick but also as an ally. This ally helps the hero navigate and stands by Shrek’s side the whole way. Upon returning home and having to face his loneliness and despair, Shrek finally notices Donkey’s insistent advice that he listens to his heart and declares his love for Fionna. The ogre’s change of heart and the decision to act on his feelings mark the beginning of hero’s initiation. The ordeal comes when Shrek breaks into Lord Farquaad’s wedding ceremony to rescue the princess, yet again. Fionna, who’s dispassionate about the Lord, declares her love in return and undergoes her own transformation; she becomes an ogress herself. Shrek realizes that true love, not isolation, is his reward. Finally seeing that he is worthy in life and can be loved.

The story ends with a happy return. The dragon bursts in the church along with Donkey and devours Farquaad. Then, Shrek and Fionna move into his place at the swamp, only this time the house is filled with friends and celebration. The transformation of the swamp – from a place of isolation to one of shared joy – is a metaphor for the ogre’s ‘return with the elixir’. The movie “Shrek” is an excellent example of Joseph Campbell’s Hero’s Journey. It has each of the twelve steps that “The Hero’s Journey” has. Shrek is the hero whom had to leave his “ordinary world” and go on an adventure. Then, by the end of the movie, he completely changed. He learned that being alone all the time isn’t always the better way to live. 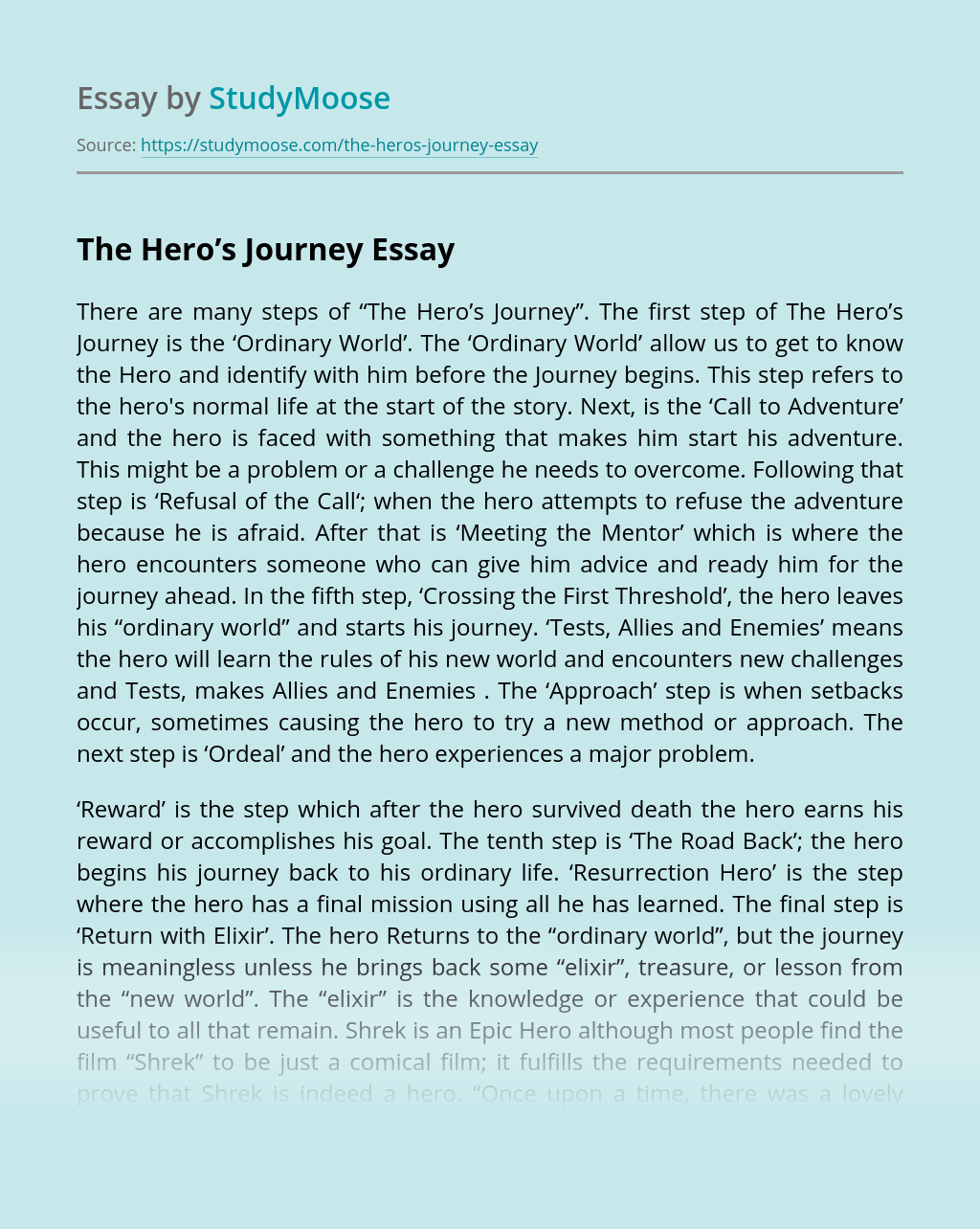 Turn in your highest-quality paper
Get a qualified writer to help you with
“ The Hero’s Journey ”
Get high-quality paper
Helping students since 2015
Stay Safe, Stay Original