Many people believe in heroes, who are selfless and willing to sacrifice themselves to benefit others. Heroes also exist in different cultures, and they usually represent courage and adventurous. According to Joseph Campbell’s theory, heroes in stories undergo a process called “The Hero’s Journey”, which is the classic plot structure of heroic stories, in order to achieve great deeds. Kung Fu Panda, a movie by the DreamWorks, demonstrates the theory of Hero’s Journey. The movie is about fat and lazy panda calls Po, who always dreams of being a kung Fu master, is unexpectedly chosen to fulfill an ancient prophecy.

Don't use plagiarized sources. Get your custom essay on
“ The Hero’s Journey—Kung Fu Panda ”
Get custom paper
NEW! smart matching with writer

Po’s dream comes true when he starts to learn Kung Fu from the greatest Kung Fu master and becomes friends with his idols, the Legendary Furious Five—Tigress, Mantis, Viper, Monkey, and Crane.

Finally, he protects the whole valley by defeating Tailung (the antagonist) by using what he learns and terns his dream of being a Kung Fu master into reality.

This movie represents the process of the hero’s journey, by showing the separation of hero’s ordinary life, the initiation in his adventure, and his return after the deeds. In the movie, separation of the ordinary world and the extraordinary world after the hero is called to the adventure, and overcomes his struggle through being inspired by a mentor. As the movie starts, it first tells about the ordinary world of our hero, the panda. By introducing the protagonist, who is also the hero, audiences get to know the normal life of Po before his adventure: working in noodle restaurant with his dad, dreaming of becoming a kung Fu master everyday.

However, Po doesn’t want his life to be like that, he still wants to learn Kung Fu. The eager of learning Kung Fu, therefore, leads him to the adventure, and take him away from his ordinary world. As Master Oogway announces his vision of Tailung’s return, it is time to call for a Dragon Warrior, who can be granted the secret power of dragon scroll to defeat Tailung. Desperate to witness the Dragon Warrior be chosen, Po accidently crashes into the middle of the arena at the moment when Oogway is to point out the Dragon Warrior. Surprisingly, Po becomes the chosen one, and he is called and summoned to the adventure. At this moment Po is facing the challenge of entering the extraordinary world, and he is preparing for it as well. However, the decision of Oogway angers Master Shifu, and the furious five; they make fun of Po and dislike him. Master Shifu even describes him as “fat and flabby”.

He not only dissatisfies Shifu and the furious five, he also failed in all his training. Po loses his confidence and begins refusing the call to adventure: maybe I should just quit and go back to making noodles”, says Po. Po is now frustrated and he rethinks he decision of being the Dragon Warrior. When Po is losing his mind and about to give up on Kung Fu, he meets the mentor who encourages him and helps him to gain back confidence. Po encounters Master Oogway at the peach tree of wisdom, Oogway tells him that he understands Po’s feeling and he knows that Po is upset. He encourages Po by telling him an old saying: “Yesterday is history, tomorrow is mystery, and today is a gift.” Thus, Po is inspired by Master Oogway, and he finally makes up his mind of being consist to his decision. Lastly, our hero crosses the threshold and steps in the world of extraordinary.

Po starts to make efforts; he trains himself by waking up early and stretch on his own. He also claims that the real dragon warrior never quit. Therefore, he now has taken his very first step towards the adventure and has accomplished the separation of ordinary and extraordinary world; next, he is going to reach the beginning of his adventure. Moreover, after leaving the ordinary world, initiation begins. On the way to adventure, Po meets some people; they may be his allies, friends, or they may possibly be his enemies. Hence, the first thing to do to get prepare for the challenge, is to identify his allies, and build up friendship with them. Po gradually gains trusts of the furious five, by showing his determination. When he is injured and hurts by in the training, Mantis and viper tries to help him relief his pain through acupuncture. In return, Po makes noodles for them and they finally start to accept him.

Also, the antagonist, Tailung, is introduced to the audience: His history of being one of the students of Shifu, and how he turns evil later on. At the same time, Tailung breaks the prison and he is on his way back to the valley where Po and everyone else live. He is coming back to get revenge on Mater Shifu, and also to get the Dragon scroll. The enemy of our hero is introduced as Po is getting ready for the challenge. Then, the approach occurs when the furious five try to defeat Tailung together. It’s the first attempt and first time the good side and the evil side combat. However, they failed stopping Tailung’s attacks. Meanwhile, Po continues to train himself to be the Dragon warrior. The ordeal he must undergo before receiving the power of dragon scroll, is the tough training. Luckily, Shifu figures out a new strategy of training that suits Po, which is using food as lure to evoke Po’ s potential. The hard works pays off.

Even though he has to endure a lot of pain and hardship in training, he finally improves and makes great effort in learning Kung Fu. As the reward, Po is granted the dragon scroll, which hides the unlimited power of Dragon warrior. The reward symbolizes Po’s progress, and it also proves that Po is worthy to be chosen as Dragon warrior. Through the effort Po has made in the tough training and getting along with his allies, he is awarded the Dragon scroll which can make him the greatest Kung Fu master. Also, after the reward, Po is about to face the major challenge in his adventure and take his journal back to his ordinary world. Although he is given the Dragon scroll as his reward for his hard working, he starts his returning to the ordinary world.

First, he finds that the mystery Dragon scroll is actually empty, and the unlimited power doesn’t exist at all. Despair and hopeless, everyone gives up on defending the attack of Tailung. Po goes back to the valley he used to live in. Citizens in the valley are preparing to evacuate to safe places. Po goes back to his restaurant, and gets ready to leave with his dad. Now Po has returned to his ordinary life and gives up on his life as the Dragon Warrior. However, the resurrection of the hero happens when Po is inspired by his dad. His dad comforts him by telling Po his secret formula of the noodle. Just like the Dragon scroll, the secret formula doesn’t exist, either.

“If you want to make it special, you have to believe that it is special.” says Po’s dad. Thus, Po is encouraged by his dad, and decided to go back and face Tailung instead of hiding from him. The final challenge for Po is coming. Po rushes back to the palace where Shifu lives, and he realizes that Tailung has arrived. When Tailung is about to kill Shifu, Po arrives to fight with Tailung and saves Shifu’s life. After a long time of fighting, Po finally defeated Tailung by using the “WuXi Finger”. Now, our hero has finished his final challenge, and starts his “return with elixir” of his journey. After defeating Tailung, Po’s adventure has finally completed. People in the valley see Po defeating Tailung, and start to call him “Master”. Po has fulfills his quest, and brought peace and security to the valley.

Everyone in the valley shares the success of Po. In brief, the movie clearly and accurately presents the three stages of Hero’s Journey (separation, initiation and return) and it shows the audience how the protagonist grows and improves to be the hero. Po is once a daydreamer, who refuse to face the reality and enjoys dreaming about being a Kung Fu master. Learning Kung Fu seems irrelevant to him at first, but his passion and consistence lead him to encounter the chance of making his dream come true. However, the hero’s journey to success is not very easy.

Po undergoes the separation of his ordinary world, to enter the adventure, and he adapts to the extraordinary world in order to get prepare for the challenge. During the training, he has hesitated, and considered giving u; nevertheless, he is inspired and encouraged to regain his confidence and refuse giving up. After overcoming all the difficulties, his hard works pays off and he finally achieves his goals. Through analysing this movie, I learn that people are not born to be hero; just like Po, he is just a normal panda who is totally irrelevant to Kung Fu; but through training and hardworking, he can become a Kung Fu master, and make his dream come true. Therefore, I recognize that everyone has the potential to be a hero, and if you try your best to approach to your goal, you will achieve it someday. 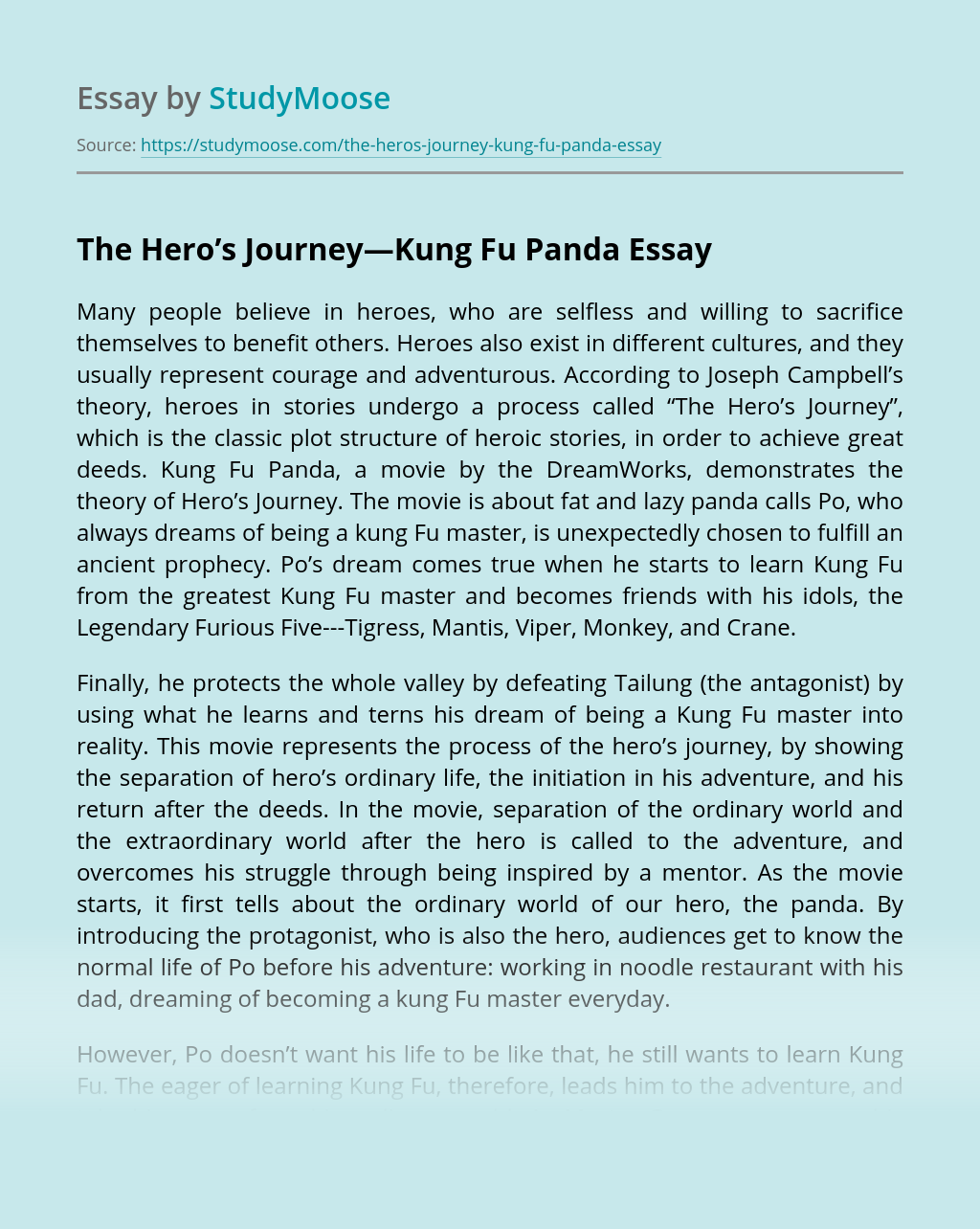