The Great Cat Massacre is a book that has a very unusual title, considering the fact that it is a book that discusses the history of cultural French stories and history. This isn’t some ordinary book that gives a boring, long and repetitive view of history. The majority of historical texts look at history from a political point of view; the actions of kings and queens, how politics changed, and famous political figures during those times. However, Robert Darnton does not follow the old style of viewing history through historical figures, but instead he portrays it through the eyes of other people.

The Great Cat Massacre is a book that contains a collection of essays that discuss the lives of the commoners in France during the Enlightenment. The topics discussed are quite interesting, talking and explaining about fairy tales and cat massacres. Darnton explains, in the most peculiar way, the origin of children’s stories and other tales from French history as well as some academic aspects during the seventeenth and eighteenth centuries.

The Great Cat Massacre reveals the secrets and mysteries of that time period through his stories and essays, which keeps the reader entertained and longing for more.

The opening chapter of the book, “Peasants Tell Tales: The Meaning of Mother Goose”, provides a historical reading of the many fairy tales we were told as young innocent children. These fairy tales had everything but happy endings and sweet morals. The gruesome truth is revealed for each fairy tale including Hansel and Gretel, Cinderella, Sleeping Beauty, Little Red Riding Hood and many more.

Each story has a horrible ending, but the real moral of the story is hidden in the text.

For example in Little Red Riding Hood, clearly, the moral of the story is that little girls should stay away from wolves, after Little Red Riding Hood gets eaten by one (Darnton, 10). However, there is much more behind this moral. Each character is a symbol that represents someone in reality. The wolf is a man who is out there to capture and rape or kill little girls or young women. Little Red Riding Hood is the young maiden who is too naïve and innocent to notice any mishaps with her dear grandmother and falls right into the trap of the wolf.

This story also describes the mentality of peasants during this time period in France where hidden symbols are used in the story. These stories were passed down orally and each person who told the story would change it to suit their own tastes, thus giving many version of Little Red Riding Hood. For example, when psychoanalyst Erich Fromm told his analysis of Little Red Riding Hood, he did not bother to mention his source, but he apparently got it from the brothers Grimm (Darnton, 26).

The Grimm’s got it from Jeannette Hassenpflug and she learned it from her mother who came from a French Huguenot family. The Huguyenots brought their own tales into Germany and so on (Darnton, 26).

In the “Workers Revolts”, Darnton discusses the event of a cat massacre committed by a group of apprentices in a print shop in the late 1730s in Paris. The story is an account from an apprentice named Nicolas Contat who worked in a shop called Rue Saint Severin. The article talks about how the lives of these apprentices in these shops were difficult and how they were extremely mistreated by their master (Darnton, 76). During these times it was a trend to keep cats; so many Masters, or bourgeois, as the workers called them, had a passion for keeping them.

One bourgeois kept twenty-five cats and had their portraits painted and fed like royalty (Darnton, 76). The apprentices were having their own problems with stray cats that would howl all night and prevent them from getting any sleep and working throughout the day in exhaustion. It was until one night where Contat, and his two friends Leveille and Jerome, decided to resolve this. Leveille had a talent for mimicry so he had gone up next to his Master’s bedroom and screeched like a cat all night preventing them from sleeping. When morning arrived the Master and Mistress commanded the apprentices to get rid of the kids; and the gleefully did so.

They grabbed all their tools and went out to capture and beat the cats to death; they stashed some in the gutter and hung them up on gallows after declaring them guilty. After the apprentices were finished, they laughed and laughed and thought it was such a funny joke. However, their laughter did not end there. Leveille reenacted the entire scene at least twenty times when the apprentices wanted to humor themselves.

This would look disgusting and repulsive to any modern normal person today, but why did the apprentices enjoy it? This just shows how we cannot connect ourselves to the peasant or workers of preindustrial Europe (Darnton, 78).

This event not only shows how people have evolved over the years, but gives insight as to what really was going on in the minds of peasants. This provides information on how people’s attitudes have changed over hundreds of years towards animal cruelty. There was once a time where torturing animals was fun and humorous and now it is considered repulsive and sadistic and even in some countries illegal.

This is because animals are now seen as being as sentimental as humans and there are many animal-right groups worldwide that protect animals from cruel treatments. However, this does not mean that animal cruelty has completely diminished in this modern era. There are still people out there who find animal cruelty entertaining such as bullfighting, cockfighting and dog fighting.

Even though the cat massacre was an event that took place in the 1730s just on one street in Paris, the incident can still be related to the relationships between the lower class and the bourgeoisie where the struggle would climax later into the French Revolution, the concept of freedom comes up. To the workers in France, the killing of cats symbolized freedom and revolt against their oppressors.

The general mood or theme of this book is something along the lines of cruelness, humor, relationships, and morals. Darnton expresses all of these themes not through just one story but through several stories as well as historical events.

The book has three other chapters: one on a police inspector who keeps a personal file on French intellectuals, making sure their thought process isn’t too free and open; another chapter is about one man’s large growing obsession with the work of Rousseau and then a chapter called “A Bourgeois Puts His World in Order: The City As Text”. Each of these stories provides important insight for readers who are interested in historiography and the interpretations of history-telling because there are events of history themselves.

Robert Darnton was educated at Harvard University and Oxford University where he was a Rhodes Scholar. He became a Junior Fellow in the Society of Fellows at Harvard. He taught at Princeton where he became Carl H. Pforzheimer University Professor and Director of the University Library at Harvard. He has written and edited two dozen books, including The Business of Enlightenment: A Publishing History of the Encyclopedia, The Great Cat Massacre and Other Episodes in French Cultural History (probably his most popular work, which has been translated into 16 languages), Berlin Journals, 1989-1990 and The Forbidden Best-Sellers of Prerevolutionary France.

His latest book, Slander: The Art and Politics of Libel in Eighteenth-Century France, was published in the winter of 2007-2008. In The Great Cat Massacre, Darnton attempts to distinguish some key elements of French rural and urban culture through folklore, documented behaviors of other, or through documents written by police inspectors and bourgeois observers. Darnton describes his own work using the following quote: It might simply be called cultural history, for it treats our own civilization in the same way that anthropologists study alien cultures. It is history in the ethnographic grain.

This book investigates ways of thinking in the eighteenth-century France. It attempts to show not merely what people thought but how they thought—how they construed the world, invested it with meaning, and infused it with emotion. Through his work, Darnton is trying to tell his readers just how different the past is by saying, “The human condition has changed so much since then that we can hardly imagine the way it appeared to people whose lives really were nasty, brutish and short. That is why we need to reread Mother Goose.”

Danton’s’ work is valuable for the philosophy of history in many ways. First, it gives examples of historical knowledge through an interpretation of events and the mentalities of others. It has its own form of accuracy and indifference by providing different versions of folklore and the struggles of peasants during several periods in the seventeenth and eighteenth centuries. Darnton shows that it is possible to figure out how illiterate people thought about the world around them, the relationships they found themselves in, the natural world, and much more.

The Great Cat Massacre. (2016, May 16). Retrieved from http://studymoose.com/the-great-cat-massacre-essay 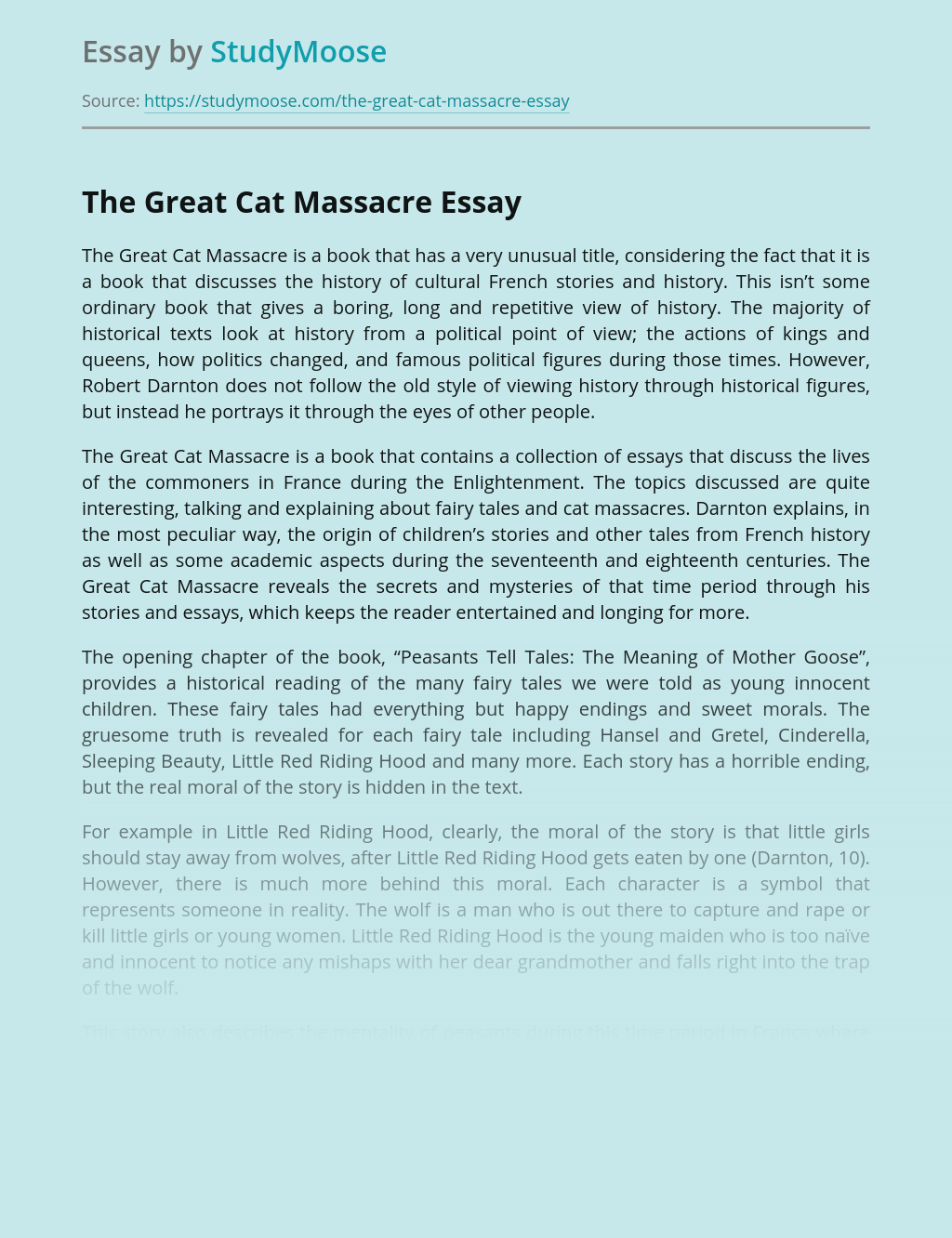 Don’t waste time
Get a verified writer to help you with The Great Cat Massacre
Hire verified writer
$35.80 for a 2-page paper
Stay Safe, Stay Original