In his statement of veto of the “Cat Bill,” Governor Stevenson manifests sarcastic diction to appeal to common sense and knowledge, and uses examples of personification and dramatization to craft his effective argument ridiculing the bill.

Governor Stevenson organizes his veto using common knowledge so that anyone of any background can comprehend his reasoning. He implies the impracticality of the bill by juxtaposing the basic effects it would have on both owners and the cats themselves. He uses subtle mockery by portraying cats as innocent and attributing their roaming behavior as a part of their nature.

Turn in your highest-quality paper
Get a qualified writer to help you with
“ “Cat Bill” Analysis ”
Get high-quality paper
NEW! AI matching with writer

He depicts the cats to be naturally unbounded and indicates the absurdity of an owner trying to domestic them to the degree of escorting them on a leash. He predicts what possible conflicts passing this bill create, and the specific effects the bill would have on different areas, such as farms, villages, and cities. Stevenson even alludes to the writers of the bill to simply dislike cats, sarcastically calling the entire roaming cats situation as a “worthy cause to which its proponents give such unselfish effort.

” Through his arguments relevant and understandable to anyone, Governor Stevenson is able to reveal the absurdity of the proposal, and allows his point to be clearly stated.

Stevenson’s use of comparison and personification are additives to the overall effective of his veto. He plays on cats’ natural rights, creating a sense of justice versus injustice. He creates an almost eerie setting by measuring the liberty of cats to humans.

By using words such as “capture” and “imprison,” the reader receives emotions of sympathy towards cats, unable to agree with the injustice they receive. Stevenson uses words of contempt, such as “hunt” and “traps,” to stir readers’ emotions to believe how evil and pagan-like these “zealous citizens” are behaving. He creates a picture of an implausible situation, such as a “cat on a leash,” allowing the reader to see how inconceivable it is. Stevenson uses examples of impossibility like these to serve his purpose – to show his reasoning behind his disapproval of the bill.

Governor Stevenson created a veto that contained sufficient reasoning behind his disapproval, using techniques of organization and personification. Through his argument, he is able to obtain the reader’s sympathy towards cats. His writing is perceivable and effective in gaining the audience’s understanding. 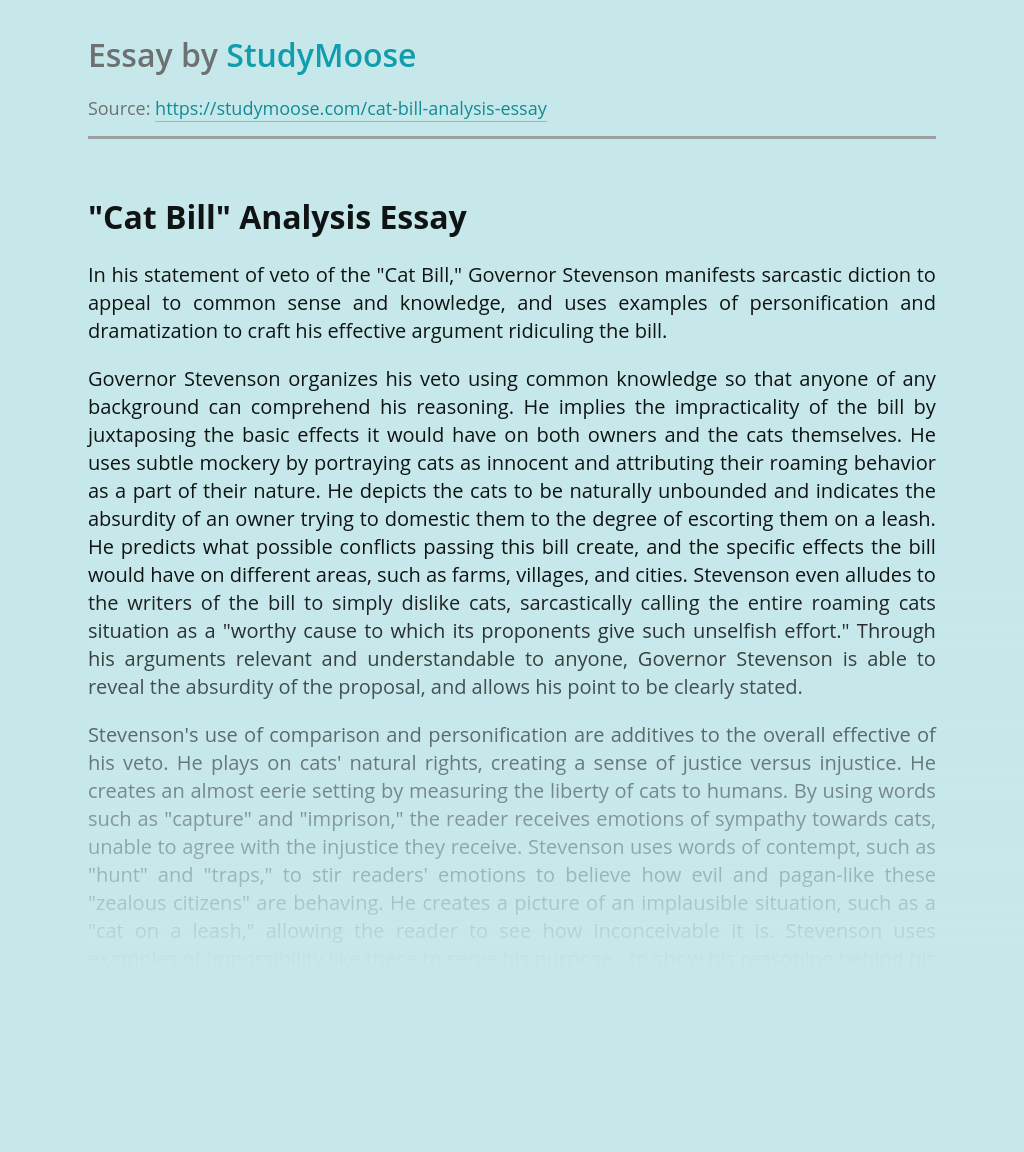 Turn in your highest-quality paper
Get a qualified writer to help you with
“ “Cat Bill” Analysis ”
Get high-quality paper
Helping students since 2015
Stay Safe, Stay Original