The glorification and sensationalization of crime in the

Netflix’s release of the Ted Bundy ‘drama/mystery’ Extremely wicked, shockingly evil and vile follows the recent surge of public interest in true crime over the last two decades. This film told from the perspective of Bundy’s then-girlfriend Elizabeth Kloepfer. The film has been criticised for casting Zach Efron as Bundy with claims that this was seen as and humanising Bundy. The film received criticism for the portrayal of Bundy as some believed it overlooked his killing of 30 women and defended his humanness.

Don't use plagiarized sources. Get your custom essay on
“ The glorification and sensationalization of crime in the ”
Get custom paper
NEW! smart matching with writer

I feel as though by undertaking a movie about serial killers there should be no glorification involved as it allows viewers to oversee the crimes of the person for the attributes of the actor portraying the individual.

With the growing trend of True crime documentaries and dramas being made the sensationalization and glorification of these atrocities come under scrutiny. Cases such as O.J. Simpson trial, Menendez Brothers and John Wayne Gacy were made infamous by the media hype surrounding them and the mass international broadcasting.

These crimes paved away for the frenzy that would follow into the new millennia and the subsequent spike in true crime books, podcasts and other forms of media that followed.

I do admit that I have consumed media in the form of books, documentaries and movies about serial killers. Due to this I am not taking the stance that media forms about serial killers should not be made but however i am saying that such media needs to be one hundred percent accurate in the portrayal of the individual.

It is up to the creator to ensure that they do not bend history or provide an inaccurate representation that will change the audiences view on the criminal.

The release of Quentin Tarantino’s ninth film ‘Once Upon a Time in Hollywood planned for release later this year is a new take on the Tate-Labianca murders committed by the Manson Family in the late 1960s. The Manson Family killed nine people in 1969, the most infamous of which is the murder of actress Sharon Tate. The film is set in Los Angeles during the time of the Manson murders and is using characters from real life in the film however the story itself is fictional.

This would not be the first time Tarantino has ‘rewritten’ history by combining real-life figures with Hollywood stories. His former movie inglorious basterds attracted controversy before the first viewing due to the plot being situated around Jewish soldiers committing acts of retribution against high up Nazi officials.

Both Inglourious basterds and Once Upon a Time in Hollywood have both received critiques for stretching the truth about the original event also sensationalizing the acts of violence. Both have also has been criticised for being insensitive to the victims and their families.

I personally enjoy Tarantino’s movies and do not believe he was being insensitive to the families through the creation of his films. I believe that Tarantino was merely exploring an artistic interpretation to what could have been an alternate albeit exaggerated ending to a point in history. To me it is all the same as Weird Al Yankovic parodying a song or Bansky redesigning existing media for public awareness.

I believe that criminals are driven by fame and public exposure. Some of which expertly use the media to increase the public’s fear towards them and make a name for themselves. Criminals like the BTK killer and zodiac killer achieved notoriety in the press by contacting police and media outlets with letters. The letters were designed to cause public outrage and to instil fear.

Other killers such as Bundy and Manson use the media outlets to win over the public view. Bundy was a considered a charismatic and good looking man, due to these attributes Bundy had a large amount of female ‘fans’. The fascination with Charles Manson has continued to this day, written in 1974 the Charles Manson biography Helter Skelter remains the best selling true crime book.

Has our unmatched fascination with true crime caused us to start humanising the killers? Did it cause us to start sensationalizing their crimes and making their unthinkable act glorified as though they were fiction? 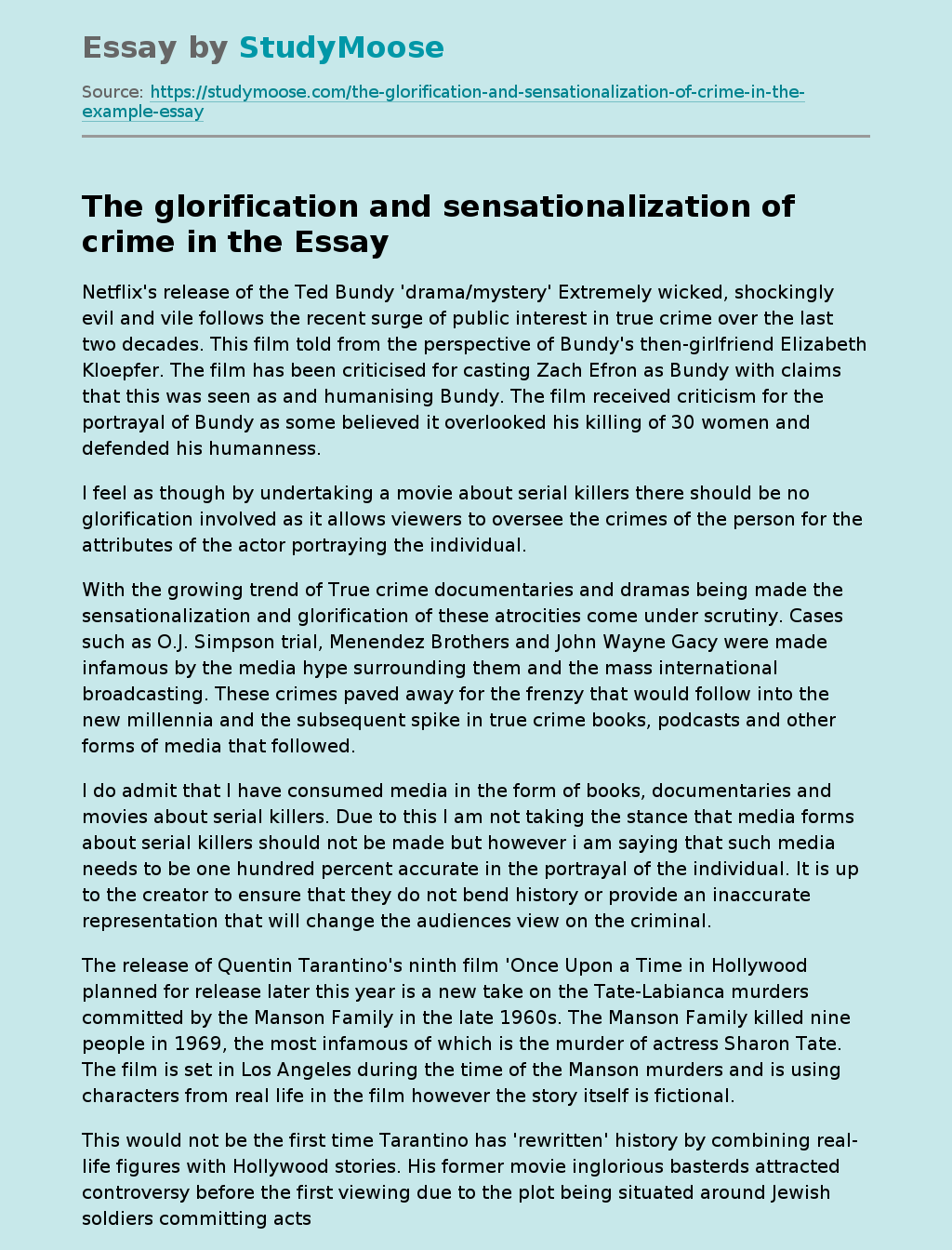