Criminology is defined as the multidisciplinary study of crime (Bartol and Bartol, 2011). To better understand criminality and people who commit crimes, it is important to take into consideration different risk factors that influence antisocial behavior. For purpose of this assignment, I have chosen The Menendez Brothers, who shot and killed their parents. The Menendez Brothers’ legal defense argued that the brothers endured severe abuse and were in fear, which ultimately led them to commit the murders.

I will try to analyze the genetic and biological factors and the situational learning of the brothers to determine any predisposition that led to their criminal behavior.

Don't use plagiarized sources. Get your custom essay on
“ Risk Factors on the Menendez Brothers Case ”
Get custom paper
NEW! smart matching with writer

On August 20th, 1989, Jose and Kitty Menendez were watching television in their home. The parents were dozing off when the brothers suddenly came into the home, shooting Jose, their father, first and then aiming at Kitty, their mother, when she tried to escape. The brothers then left the home, discarded the weapons, went to the movie theater and bought tickets to use as an alibi.

Upon their return to their home, the older brother Lyle called the police and told them that their parents had been killed. At the time, both brothers denied having anything to do with the murders. It was not until the younger brother Erik confessed the murders to his psychiatrist that police was able to connect them with the murders. But let’s commence by analyzing the genetic/ biological risk factors of the brothers. As learned in Chapter 3 of Criminal Behavior, A Psychological Approach (Bartol and Bartol, 2011), genetics is correlated to the behavior of human beings.

Temperament is determined largely by genetics. In the case of the Menendez’s it has been well researched that the father, was a very controlling man who often incurred in violent behavior towards his family. A family history of mental health issues may also have contributed to the brother’s antisocial behavior as well. It was said the mother suffered from depression, since young age, mainly after her father abandoned her family and remarried. At times, she also talked about suicide.

Kitty’s suicidal thoughts developed after discovering that her husband had an affair ith a woman in New York. Her psychologist, Edwin S. Cox, testified that Kitty Menendez saw suicide as a way to get back at her husband for his longtime affair. According to Cox, ‘her purpose was to punish her husband and she didn’t think much about the effect on her children’. As a mother, my first instinct is to protect my child. In the case of Kitty, she was more concerned with her marriage than her children. Kitty was also portrayed as dependant on drugs and alcohol. We know that parental alcoholism and depression increases the risk of antisocial behavior later in life.

We should also take into consideration the influence of siblings. It was well documented that Erik “worshiped” his older brother Lyle. If we think about it, Erik may have seen his father as unapproachable because of his temperament and his abusive and controlling behavior, while his brother was his comfort, and most likely, his father figure. The legal defense for The Menendez Brothers argued that the brothers acted in self-defense and fear as a result of the physical and emotional abuse perpetrated by both parents. They argued that the Brothers truly believed that the parents were going to kill them.

The family had taken a boat trip the day before the murder. Witnesses testified that the brothers kept themselves isolated and not engaged with their parents. This behavior seemed odd to the common eye but the defense team argued that the bothers’ behavior during that voyage was caused by the belief that the parents were going to murder them during the trip. As mentioned before, Jose Menendez was portrayed as controlling and abusive. One article states that Jose engaged on “rigid rules and great outburst of violence.

The Menendez parents did not provide a home environment were self-regulation and acceptance was practiced. Teachers at school also noticed that the children were immature for their age and had learning inabilities. But Jose seemed not interested on this matter. At times, both parents completed school assignment for the brothers and teachers noticed discrepancies between school work and homework. The children always had to live up to their parent’s expectations and whenever they did not, physical and emotional punishment was the parenting method used.

The brother’s also disclosed sexual abuse perpetrated by their parents. It was said that Kitty turned a blind eye towards the abuse in fear of losing her marriage and that she even sexually abused Lyle from the ages 11 to 12. If the siblings were in fact subjected to the sexual abuse, this is the behavior they learned to be right and acceptable. And there may be validation to this claim of sexual abuse. The brothers behaved sexually inappropriately towards their cousin, only stopping when she screamed or was able to get away.

Relating Skinner’s theory of Behaviorism and learning to the Menendez Case, he argued that ‘human beings are born neutral- neither good nor bad’ and that ‘culture, society and the environment shape behavior’ (Bartol and Bartol, 2011). Based on my research on the Menendez Brothers’ childhood and upbringing, I can understand how situational learning affected the brothers’ lives. Antisocial behavior in the brothers may have developed as a result of their home environment. The Menendez parents did not foster an atmosphere in which the children would be able to become socially integrated.

It is clear that Jose wanted Lyle to accomplish at school what he was not able to achieve himself, thus never the less Jose did not provide the necessary tools for the children to succeed. The brothers engaged in antisocial behaviors from a young age. However, when he was compelled by the behavior of his children, Jose made excused for them, instead of realizing that the lack of love and adequate discipline and supervision skills played an active role on the development of the children’s personality and ultimately on their antisocial behavior.

I conclude that even though the brothers may have been genetically or biological pre-disposed to antisocial behavior, if the home environment in which they were raised had been a supportive one, nurtured with love and acceptance, without abuse, the Menendez Brothers’ outcome could have been different and the risk of criminal behavior could have been scarce. 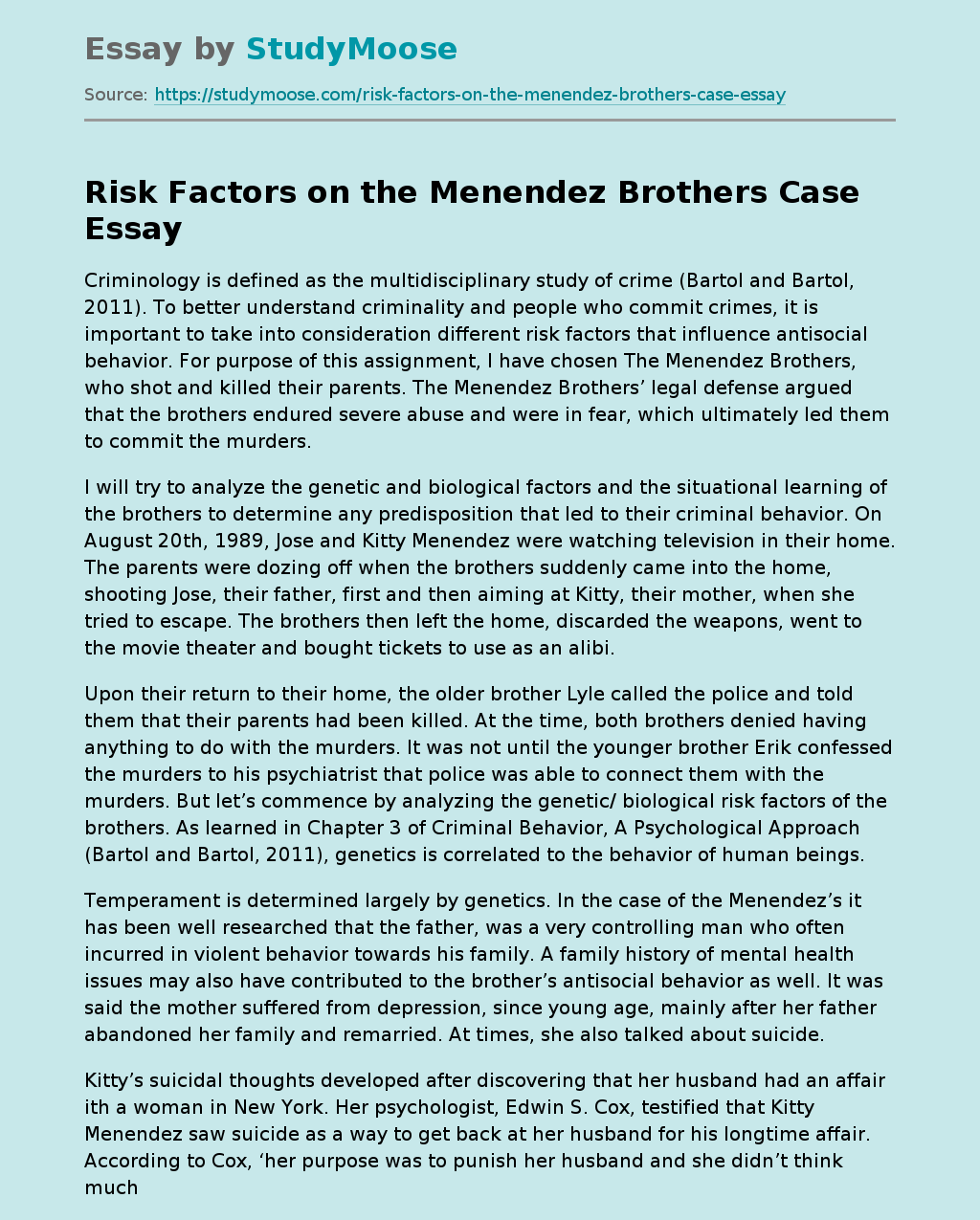