Antisocial personality disorder (ASPD) is characterized by a lack of regard for the moral or legal standards in the local culture. There is a marked inability to get along with others or abide by societal rules (APA, 2000). This pattern of behavior is seen in children or young adolescents and persists into adulthood. It is also often known as sociopath, psychopath or dyssocial personality disorder. People who are diagnosed with ASPD have no conscience, move through society as predators and pay little attention to the consequences of their action.

Don't use plagiarized sources. Get your custom essay on
“ Antisocial Personality Disorder ”
Get custom paper
NEW! smart matching with writer

They cannot understand feelings of guilt or remorse. Their lack of empathy is often because of their strong sense of self-worth and a superficial charm that tends to mask an inner indifference to the need or feelings of the other. They are also really good at manipulating situations.

However, sociopaths with lower education are still really good liars but tend to be more violent and aren’t as good at manipulation. (NICE, 2010) Psychopath is actually different from sociopath.

According to Professor Alan Basham from EWU’s Psychology Department, psychopath is more like an advance version of sociopath. They don’t have capacity to feel attachment, empathy or shame. They simply don’t care about the others. They are even capable of killing their friends or families. Sociopaths are not necessary killers. They manipulate to gain their own benefit but still can feel emotional attachment to other individuals. The sociopath will still lack empathy and attachment for society and won’t feel guilt harming a stranger or breaking the law in any form, but won’t lack empathy for those to whom he feels attached.

Both genetic and environmental factors influence the development of ASPD. Adopted children have an increased risk of developing ASPD. Children born to parents diagnosed with ASPD but adopted into other families resemble their biological more than their adoptive parents.

However, the environment of the adoptive home may also lower the child’s risk of developing ASPD. Also, both male and female can be sociopath or psychopath. (NICE, 2010) “Attachment is the process through which people develop specific, positive emotional bonds with others. John Bowlby proposed the notion of the attachment behavior system as an organized pattern of infant signal and adult responses that lead to a protective, trusting relationship during the very earliest stage of development.” (Newman & Newman, 2006) Through the attachment theory, we know that children learn how to love, trust and care about each other by learning this from their parents in early childhood. As a child grown up in an abusive environment, they usually lack of parents caring and led to failure to attach. “Factors and events have been linked to developmental psychopathology and its antisocial consequences or sequelae.

These include abuse and neglect, exposure to interpersonal/interparental violence, intergenerational substance abuse, maladaptive attachments in early life, maltreatment such as abandonment, and neurodevelopment.” (Armstrong & Kelley, 2008) The experience of rejection or loss of love during early childhood appears to create a root cause for underlying emotional pain and poor individuation that are subsequently played out in abusive behaviors. Everyone is their enemies, they have to protect themselves and that is how they become anti-social. “Multiple interacting forces contribute to childhood maltreatment and trauma, leading to the development of psychopathology. How early interpersonal relationships are formed may be a contributory mechanism in coping strategies later in life.

These factors in turn may contribute to a lack of basic trust, detachment from relationships, and affective experiences causing maladaptive behaviors later in life.” (Armstrong & Kelley, 2008) “The therapist’s primary task is to establish a relationship with the patient, who has usually had very few healthy relationships in his or her life and is unable to trust others. The patient should be given the opportunity to establish positive relationships with as many people as possible and be encouraged to join self-help groups or prosocial reform organizations.” (NICE, 2010) However, Antisocial Personality Disorder is highly unresponsive to any form of treatment, usually because persons with ASPD rarely seek treatment voluntarily. They do not think there is anything wrong with them, it is always the others. If they do seek help, it is usually in an attempt to find relief from depression or other forms of emotional distress.

“Given that those with antisocial personality disorder actively resist having to accept help, and that coercion into treatment directly challenges their core personality structure, it is clear that therapeutic interventions are also likely to be under threat in such circumstances. Hence, one might expect a high drop-out rate from treatment and indeed that is what has been found.”(Huband, 2007) Also, many people who are diagnose with ASPD use therapy sessions to learn how to turn “the system” to their advantage. Their pervasive pattern of manipulation and deceit extends to all aspects of their life, including therapy. Generally, their behavior must be controlled in a setting where they know they have no chance of getting around the rules. Medication could only treat some of the symptoms of ASPD. The only solution would be prevention.

“Antisocial Personality Disorder usually follows a chronic and unremitting course from childhood or early adolescence into adult life. The impulsiveness of the disorder often leads to in prison or an early death through accident, homicide or suicide. There is some evidence that the worst behaviors that define Antisocial Personality Disorder diminish by midlife; the more overtly aggressive symptoms of the disorder occur less frequently in older patients. This improvement is especially true of criminal behavior but may apply to other antisocial acts as well. (NICE, 2010)

Therefore, to prevent antisocial personality disorder must begin in early childhood, before the children are at risk for developing conduct disorder. Education for parenthood to lower the incidence of child abuse is necessary. “The only long-term solution, I believe, is Westman’s proposal that we require prospective parents to meet the same minimum requirements that we now expect of couples hoping to adopt a baby: a mature man and woman, sufficiently committed to parenthood to be married to each other, who are self-supporting and neither criminal nor actively psychotic.” (Lykken 1996) 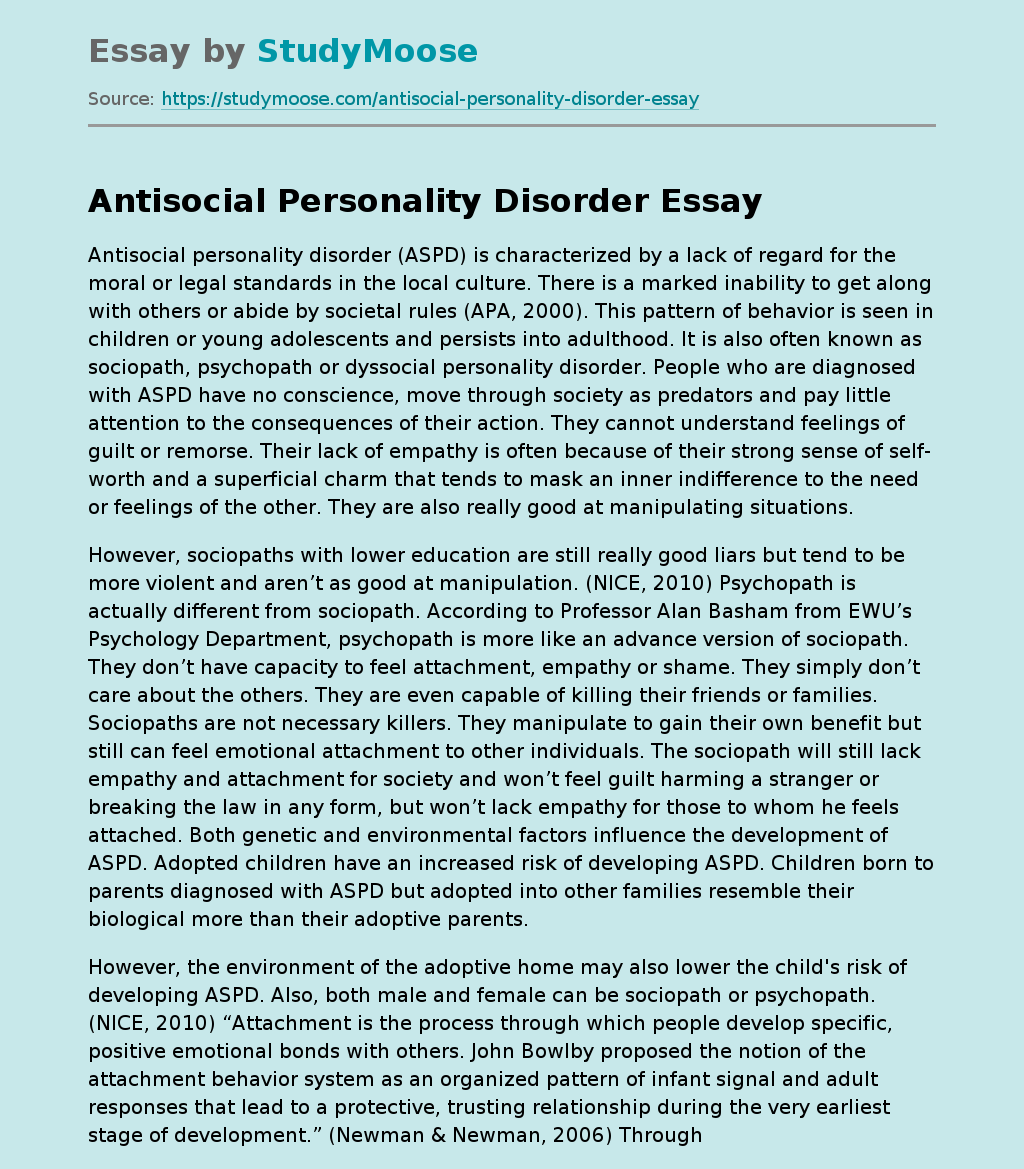