The Global Issue of Poverty

As an individual, raising one’s awareness on the causes of poverty and its manifestations is the first step in the effort to help reduce poverty. The knowledge that change can not be effected through individual efforts but through collective endeavors will motivate one to join organizations and initiatives that aim to mitigate specific poverty issues (www. marininstitute. org, 2006). However, we should not be chauvinistic enough to treat the poor as if they do not have the capacity to realize change for themselves.

Don't use plagiarized sources. Get your custom essay on
“ The Global Issue of Poverty ”
Get custom paper
NEW! smart matching with writer

Our role should be as a catalyst for change and with a faith in the innate ability of the poor to work together to alleviate their economic and political conditions. We should in turn build the awareness of the poor about their situation, educate them in the knowledge, skills and attitudes required for them to lead and work for themselves, organize them around common goals, mobilize them for concrete actions and help them evaluate their experiences and learn from them.

On the other hand, society can eradicate poverty by assessing the economic, political and cultural systems that perpetuate it and implementing necessary reforms.

Social class plays a role in marginalizing people while others acquire so much more then they can spend or use. The political power associated with economic status is another aspect. As long as the wealthy hold the major decision-making positions in government and exclude the sector of the poort, situations of poverty will continue. A culture that accepts poverty as the status quo is another area for change.

Educational institutions, the church and the media should work to expose social realities from the perspectives of the poor. Inequality and injustice should not be made to be tolerated as the norm.

At the same time, society should not only look at the plight of its citizens but also on how its foreign policies affect other nations. Trade relationships should be based on mutual benefit and mutual consent on the rules governing the relationship. Imposition of trade policies for the benefit of developed countries only will not do any good in equalizing the first-world and third-world gap (Irogbe, 2005). Lastly, more powerful countries should recognize the right of other nations to chart their own destinies instead of intervening through covert ways or through waging war against those countries.

The Global Issue of Poverty. (2016, Nov 28). Retrieved from https://studymoose.com/the-global-issue-of-poverty-essay 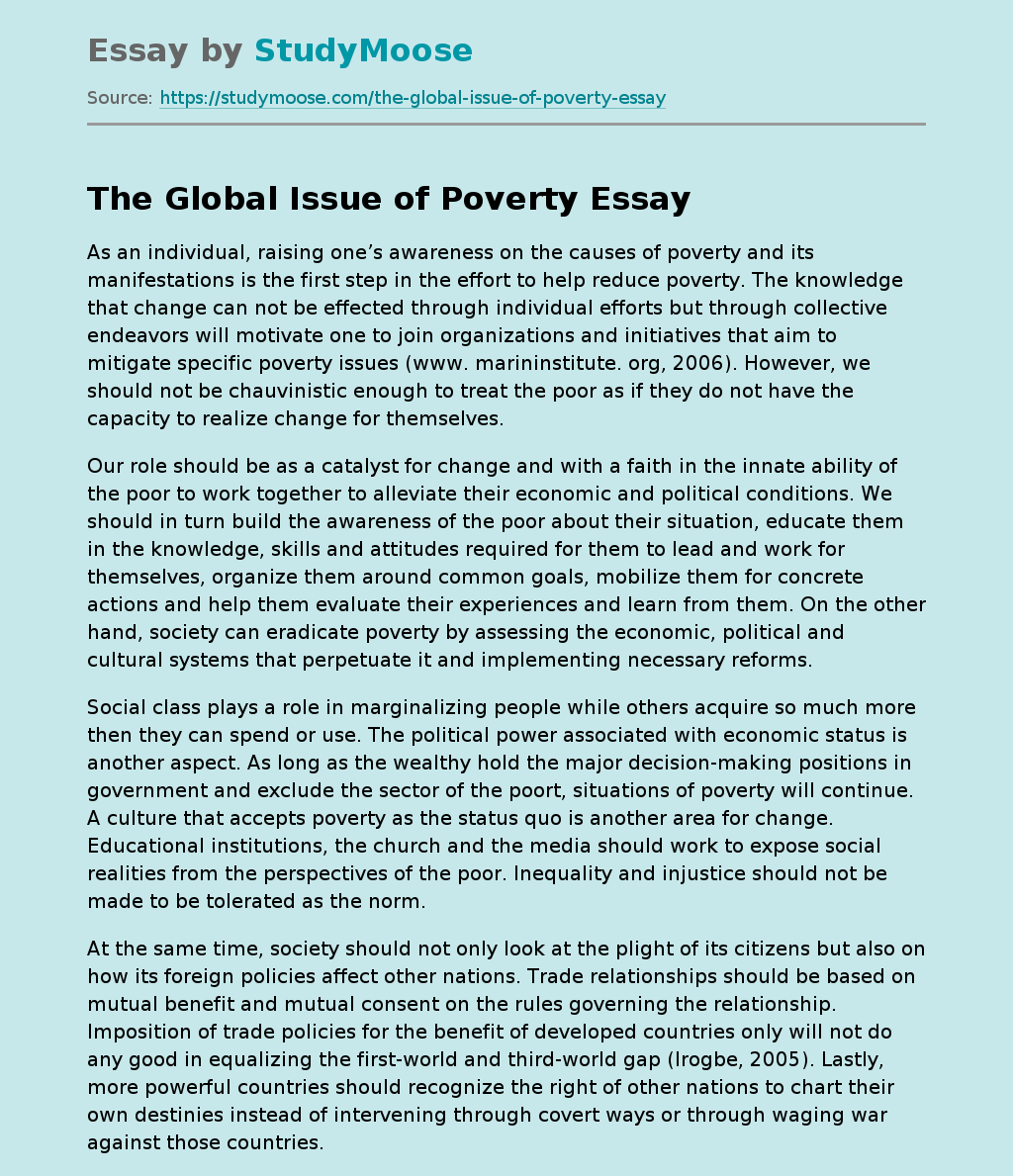