The Glass Menagerie was written by Tennessee Williams and What’s Eating Gilbert Grape was written by Peter Hedges. The first main difference between these two works is that The Glass Menagerie was a memory play that premiered in 1944 and What’s Eating Gilbert Grape was a novel in 1991 that was later adapted into a film in 1993.

The main factor in The Glass Menagerie is that the characters and the story mimic the author’s own life, which he includes himself, his mother and sister as the representation of the characters in the play and how his emotions are depicted towards his family.

Don't use plagiarized sources. Get your custom essay on
“ The Glass Menagerie and What’s Eating Gilbert Grape Essa ”
Get custom paper
NEW! smart matching with writer

What’s Eating Gilbert Grape is separate and not inspired by the author’s life, but instead about a man named Gilbert that has to take care of his disabled brother and his obese mother, which gets in the way when love walks into his life.

The similarities and differences that both stories have are the characters and the themes, such as escapism and the interactions between the main character and his family.

The character, Amanda, from The Glass Menagerie is similar to Gilbert’s mother, Bonnie, from What’s Eating Gilbert Grape because their characteristics are alike and their major role in their respective stories. For Amanda’s character, “Don’t say crippled! You know that I never allow that word to be used!” (80) and “One Sunday afternoon in Blue Mountain-your mother received-seventeen!-gentleman callers! Why sometimes there weren’t chairs enough to accommodate them all” (33). This shows that Amanda really cares about her daughter, Laura, and that she depends on Tom to take care of the family, by having a job and paying the bills.

The difference between Amanda and Bonnie is that Amanda dwells in the past and annoys Tom by exaggerating the stories to him. For Bonnie’s character, after Arnie gets arrested for climbing up the water tower, Bonnie finally leaves the house after 7 years and orders the policemen inside the police station to release her son. This shows that Bonnie is very courageous and that she loves her son very much. Bonnie is very dependent of Gilbert and her daughters to take care of her, since she’s obese. Amanda and Bonnie both have many similarities and differences between each other.

The theme of escapism exists in both of these stories and they greatly impact the overall storyline and the protagonist. In The Glass Menagerie, “I’m like my father. The bastard son of a bastard! Did you notice how he’s grinning in his picture in there? And he’s been absent going on sixteen years!” (97) Tom is exactly like his father because he abandoned his family to have his own adventure. Tom hates his life and he often goes to the movies or the fire-escape, showing that he wants to escape.

In What’s Eating Gilbert Grape, Gilbert beat up his brother, Arnie, because he refused to take a bath, after that he left the house and drove off. Gilbert had enough of Arnie and his responsibility of taking care of him, he just wanted to escape and spend more time with Becky. Gilbert doesn’t completely hate his family, it’s true that he wants to escape, but he also had to take care of his family. The form of escapism in both these stories are similar to each other and if affects with the protagonist’s feelings towards their family.

The interactions between the protagonist and their family from both stories include helping one another out and having internal arguments/conversations that progress the story forward and additional character development. In The Glass Menagerie, Amanda complains about Tom going to the movies a lot and asks Tom to get a gentleman caller for Laura.

Even though they get into arguments, Tom still has the responsibility of taking care of his family and only accepted inviting over a gentleman caller for Laura to save himself. Amanda worries about Laura because of her extremely shy personality and has a fear of Tom being like his father, abandoning the family. In What’s Eating Gilbert Grape, Gilbert works at Lamson’s Grocery, a small grocery store that rivals Foodland, to support his family and everyone in the family was responsible for taking part over something for Arnie’s birthday party in order to make it successful. The Grape family puts Arnie’s birthday as their top priority into making it successful, this shows that they care about him a whole lot.

The burden of taking care of Arnie puts Gilbert in a lot of pressure and would cause him to make regrettable decisions. The Wingfield and Grape family had many conflicts residing one another that would overall effect the storyline and the character’s emotions, but they do care about each other and help their individual conflicts.

In The Glass Menagerie and What’s Eating Gilbert Grape, the characters show similar and different unique qualities that contributes and drives the plot towards the conclusion. The major theme of both these stories is the existence of escapism, as both the protagonist have the responsibility of taking care of their family and wanting to escape and be free of their burden.

Both of the families care about each other, solve their conflicts, and wants the best future for them. I personally agree with the matter of subjects that were discussed about the comparisons and the contrast between these two stories and the thought of various factors given.

The Glass Menagerie and What's Eating Gilbert Grape Essa. (2016, May 25). Retrieved from https://studymoose.com/the-glass-menagerie-and-whats-eating-gilbert-grape-essa-essay 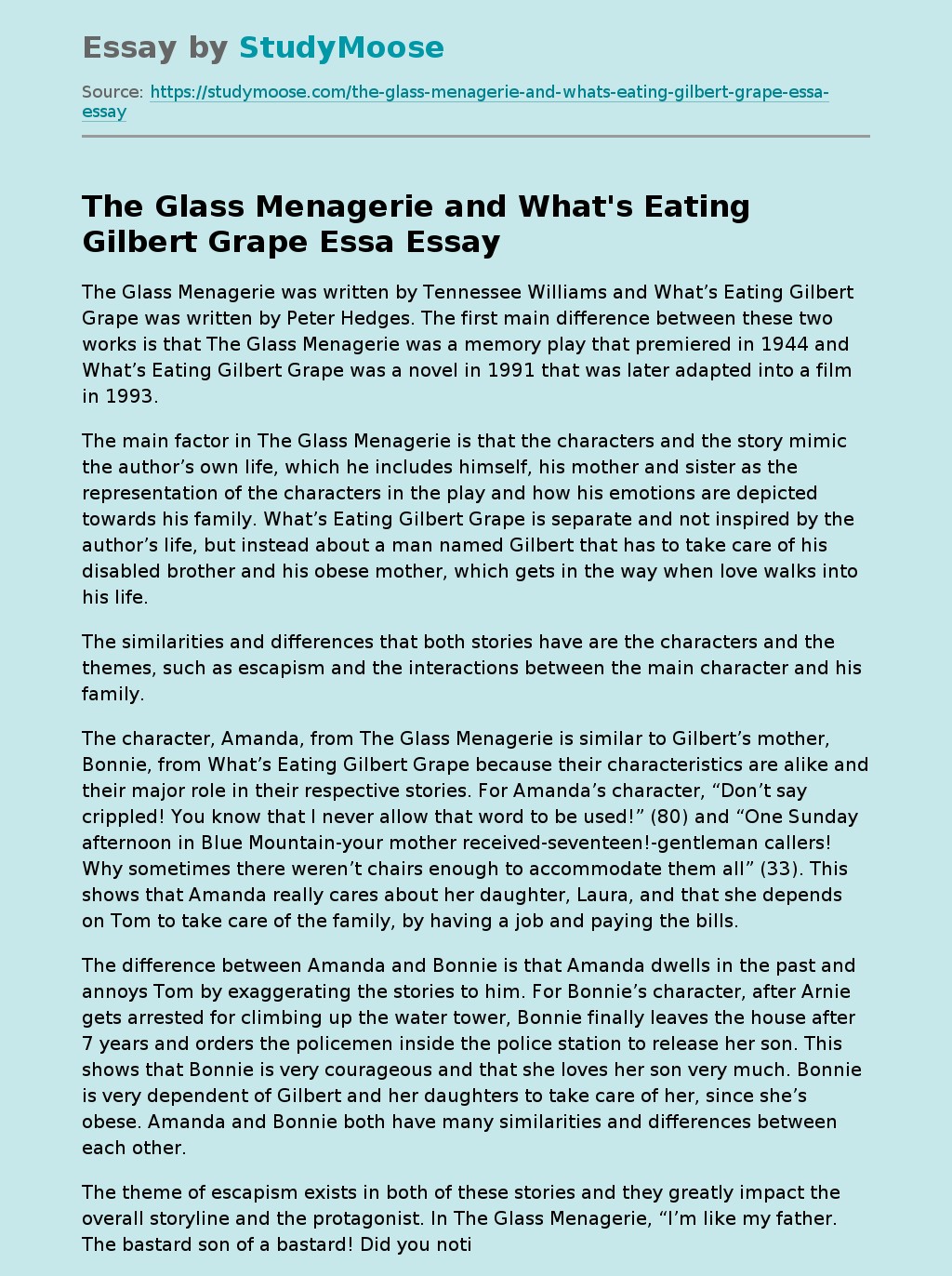