The Gift of Happiness

Getting a gift is one of the many and wonderful realities of life. Gift may be obtained from many sources and is given for various reasons hence its value is something that is treasured. However, beyond the tangible nature of gift are the significantly essential experiences and lessons that an individual is able to derive from it.

Hence, gift affects the life of the recipient as it elicits different feelings and results to immeasurable implications. The complexity of today’s modern world, however, manifests that gift is more appreciated by its merit or how it is able to impart important life messages.

Don't use plagiarized sources. Get your custom essay on
“ The Gift of Happiness ”
Get custom paper
NEW! smart matching with writer

This is because it is only through an effective and moving manifestation of life realities and lessons that people are able to grasp the true meaning or rationale behind gift-giving.

Gifts come in many ways. More valued than the material gifts are those that are given primarily with an intention to change the life and values of the recipient.

A concrete depiction of such condition is the gift which was only obtained by its recipient after he experienced a challenging journey. The said travel is required in order for the person to eventually get his ultimate gift. En route to his destination, the man is in pursuit and able to find himself thus subsequently offered a part of him to others.

In doing so, the gifts which he obtained are the very same gifts that he offered and benefited the other recipients. Jim Stovall’s (2007) book titled “The Ultimate Gift” exemplified such condition of gift-giving wherein the recipient had his personal realization of the beauty of life.

This recognition of the value of gift itself and its worthwhile effects to one’s life made the main recipient to adhere to a need to share the gifts he received purposely to also affect the lives of other people.

The Ultimate Gift, an Overview

Stovall’s symbolical and inspirational novel presented the character of a spoiled young man named Jason Stevens who, never in his life, experienced life’s challenges until the death of his great uncle – the wealthy patriarch Howard “Red” Stevens (Stovall). Jason is as greedy as the rest of the Stevens clan thus the reading of the last will and testament of the deceased patriarch was purposely done by lawyer-friend Theodore Hamilton in a way that Jason will be left responsible to accomplish the earnest hope of Red to work and search for the ultimate gift. The fact that there is nothing special about Jason, being the great nephew of Red, made the latter pick him from among the entire Stevens family and entrust him with a one billion dollar trust fund.

However, Jason’s fortune is hard-earned because before finally getting his billions, he is required to accomplish a condition containing around twelve tasks or obligations which he needs to discover for himself and eventually do for others. As Jason started his journey, he unintentionally discovered the realities and lessons of life by inevitably experiencing the many gifts of life until he was finally faced with the ultimate gift which tells of the relationship between wealth and happiness (Stovall 19).

Red’s designed plan for Jason has proven its worth as the life and fate of a previously irresponsible man, who anticipated that he will easily collects and spends his billions of inheritance, was changed by a year-long challenge. As the singled-out and “the last vestige of hope in the Stevens family,” (Stovall 22) Jason was perceived by Red as the one who can ignite and turn something into a flaming pursuit for the true meaning of the gifts of life (Stovall 22). The patriarch’s efforts were not lost as Jason in the end, was reformed and shared the several gifts of life which he discovered and experienced. Lastly, Jason eventually realized that the ultimate gift is the gift of love and happiness which only the Creator can provide and which can only be achieved when shared with others.

Stovall’s “The Ultimate Gift” is a concrete manifestation that problems in life can be reasons or grounds for people to rejoice. In fact, life crisis can be taken as an opportunity or may actually be a gift only in disguise. This is what the story of Jason has manifested. The challenging realities enabled Jason to learn his lessons in life and eventually get his ultimate gift – a gift which is intangible and that even a one billion dollar worth of trust fund cannot encompass.

The decision of benefactor Red to set aside a special gift for Jason, which the latter can only achieve upon completion of a challenge, was worthwhile. This is because Jason was not only faced with the realities of life but learned life lessons as well and finally got the ultimate gift. Due to the patriarch’s wisdom and love, he did not make Jason an instant billionaire and instead brought out the best in him being the only remaining remnant of hope for the Stevens clan (Nuzzo).

With Hamilton’s supervision, Red’s ultimate gift was handed over to Jason who later learned of the details of his great uncle’s plan through a series of pre-recorded messages. The videotapes informed Jason of the challenge which he needs to do or accomplish. In doing so, Jason is faced with a sequence of tests which eventually unleashed him on a hero-like mythic travel in search or pursuit of his ultimate gift.

During the journey, Jason encountered problems which challenged his beliefs. The obstacles, however, enabled Jason to grow and mature while at the same time discovered the true meaning and significant of a well-lived existence in this world. The readers may find the recorded messages and directives as too engineered. Fortunately for Red, the plan had its purpose while for Jason, it served as a worthwhile tool for his personal awakening and eventual realization of the sweetness of achieving the ultimate gift.

A critical analysis of the Stovall book explains the reason behind how the public is swept away in the personal journey of Jason. This is because the readers, like Jason, are directed towards the pursuit and achievement of life’s ultimate gifts. The book, through Jason’s journey, is like a manifestation of life realities, challenges, lessons where in the end lies or offers an irresistible gift. In fact, the Stovall novel did not present major surprises or some mysteries. This is because simple realities are usually the most reflective and at all times worth remembering (Nuzzo).

The tale unconsciously presented the existence of God and His gifts because it established the principle that life is the ultimate gift from the Creator. However, Stovall wrote the book in such a way that it did not manifest any form of spiritual doctrine or dogma. This is because the book’s realities, lessons and gifts are general in nature. Additionally, the core values and messages of life are relevant to persons of any spiritual affiliation and even to those with no religious association (Nuzzo).

One manifestation of the lesson learned by Jason is how he spent his $1,500 earnings. Not only did Jason was able to work for his money but he also discovered the gift of sharing it wisely with people who are in need (Stovall 44-46). This part showed how Jason got the ultimate gift which represented a moral motivation as well as a significant manner to relay core values, principles and memorable life events which are definitely needed by people.

The realization of life lessons, which allowed Jason Stevens to value and apply the many gifts that he acquired from his year-long challenge, has proven to be the ultimate gift that the deceased Red Stevens has reserved for his great nephew. In fact, it is not only Jason who can benefit from the ultimate gift which was presented by Stovall in a moving novel.

The 12 gifts and the ultimate gift which is the gift of happiness are reflections of human lives. The book has just manifested the gifts in a way that it allows the reader to contemplate on the meaning and application of each gift. As for Jason, he was fortunate that he accomplished the challenge and grasped the ultimate gift that wealth is insignificant compared with the happiness of sharing good deeds with other people.

The Gift of Happiness. (2017, Mar 19). Retrieved from http://studymoose.com/the-gift-of-happiness-essay 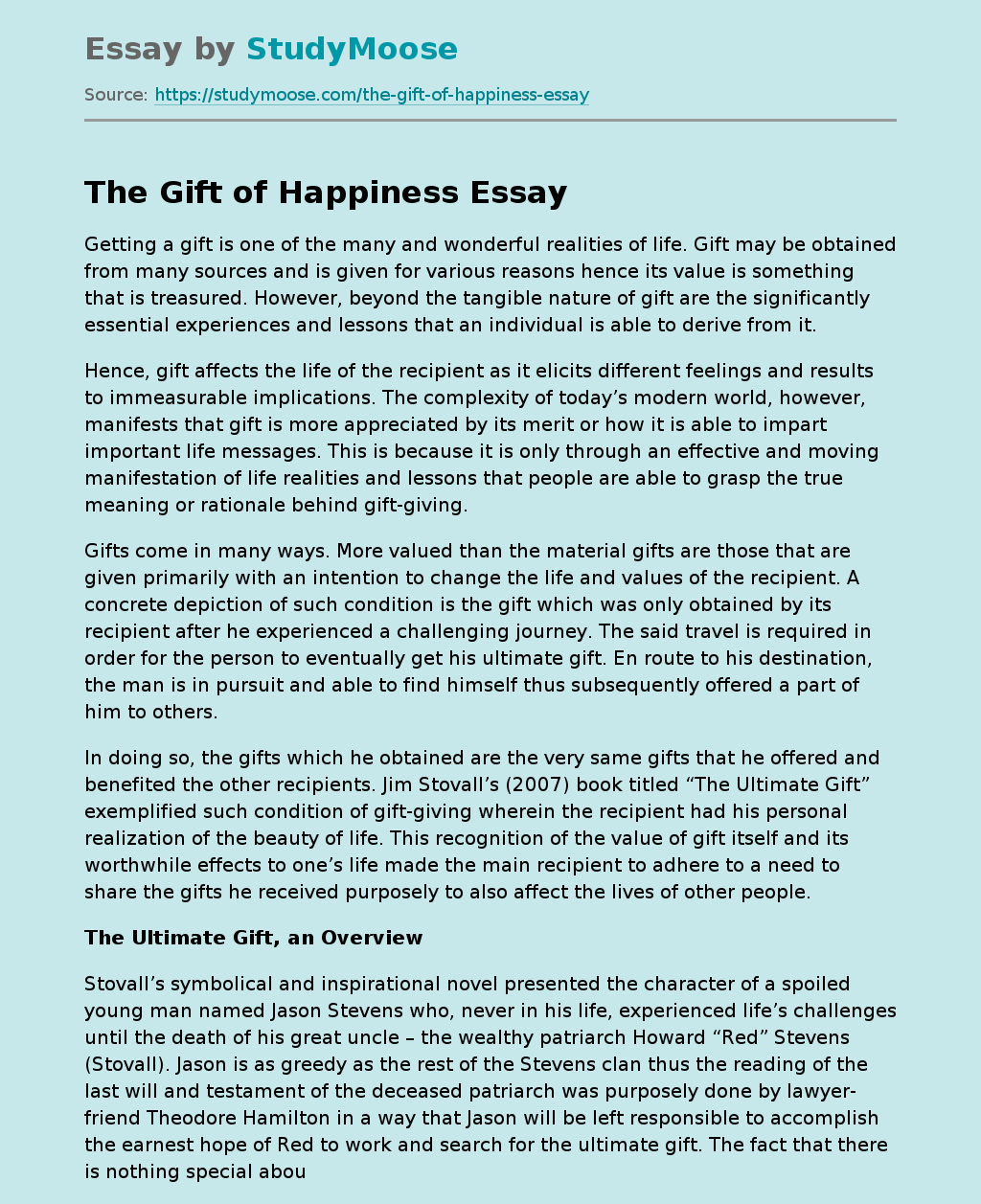