The facade essay on 'The Great Gatsby"

F. Scott Fitzgerald demonstrates that real joy does not come from material objects and the deception that wealth will bring people happiness in his novel, The Great Gatsby. Nick Carraway, the narrator, tells about three characters that are not what they seem. A wealthy man, Jay Gatsby, spends his whole life trying to find happiness in money and material things. Daisy and Tom are fake and too careless to know what true reality is. In the novel, things may not be what they appear as shown by the illusion Gatsby lives, Daisy’s attitude, and Tom’s relationships.

Don't use plagiarized sources. Get your custom essay on
“ The facade essay on ‘The Great Gatsby” ”
Get custom paper
NEW! smart matching with writer

Gatsby lives an illusion that his wealth will lead to satisfaction and friendship. Gatsby has people all around him, going to his parties, yet no one truly knows him. Born a poor man and son of a farmer, James Gatz desires living the “American dream”. Because of this dream, he creates a false Identity, Jay Gatsby, “So he invented just the sort of Jay Gatsby that a seventeen year old boy would be likely to invent, and to this conception he was faithful to the end”(104).

He wastes his life trying to impress other people with material success. Gatsby is the type of person to do anything to get happiness even if it is the false kind. Jay Gatsby is man who will have it all and believes Daisy, an image of money and happiness, is a perfect fit.

Daisy presents a false personality to others in hopes they will believe she is happy.

When Nick mentions his and Daisy’s hometown, she cries ” How gorgeous! Let’s go back, Tom, tomorrow!” “You ought to see the baby” (14). The way she exaggerates everything and bounces from one subject to the next exposes her phony attitude. Nick’s recognizes Daisy and Tom’s faults as he states, “They were careless people, Tom and Daisy — they smashed up things and creatures and then retreated back into their money or their vast carelessness or whatever it was that kept them together” (188). Like Daisy, Tom only cares about himself. Tom’s relationships demonstrate his careless with feelings.

In Tom’s relationships, he proclaims love but does not display it. Tom is “a brute of a man”, an aggressive bully who buys love. He won Daisy and Myrtle, his mistress, through money. Nick describes Tom when he says, “It was a body capable of enormous leverage- a cruel body”(11). When Tom breaks Myrtle’s nose for saying his wife’s name it confirms Nick’s statement. His actions do not portray actions of love. Tom shows his want to be in control. He acts superior to the women in his life. Tom’s relationships, like the people in the novel, are deceptive.

It is shown that things are not always what they seem by the fake personality of Daisy, Tom’s rough relationships, and how Gatsby lives a lie. People mislead themselves throughout the novel in the way they live.

The facade essay on 'The Great Gatsby". (2016, Jun 24). Retrieved from https://studymoose.com/the-facade-essay-on-the-great-gatsby-essay 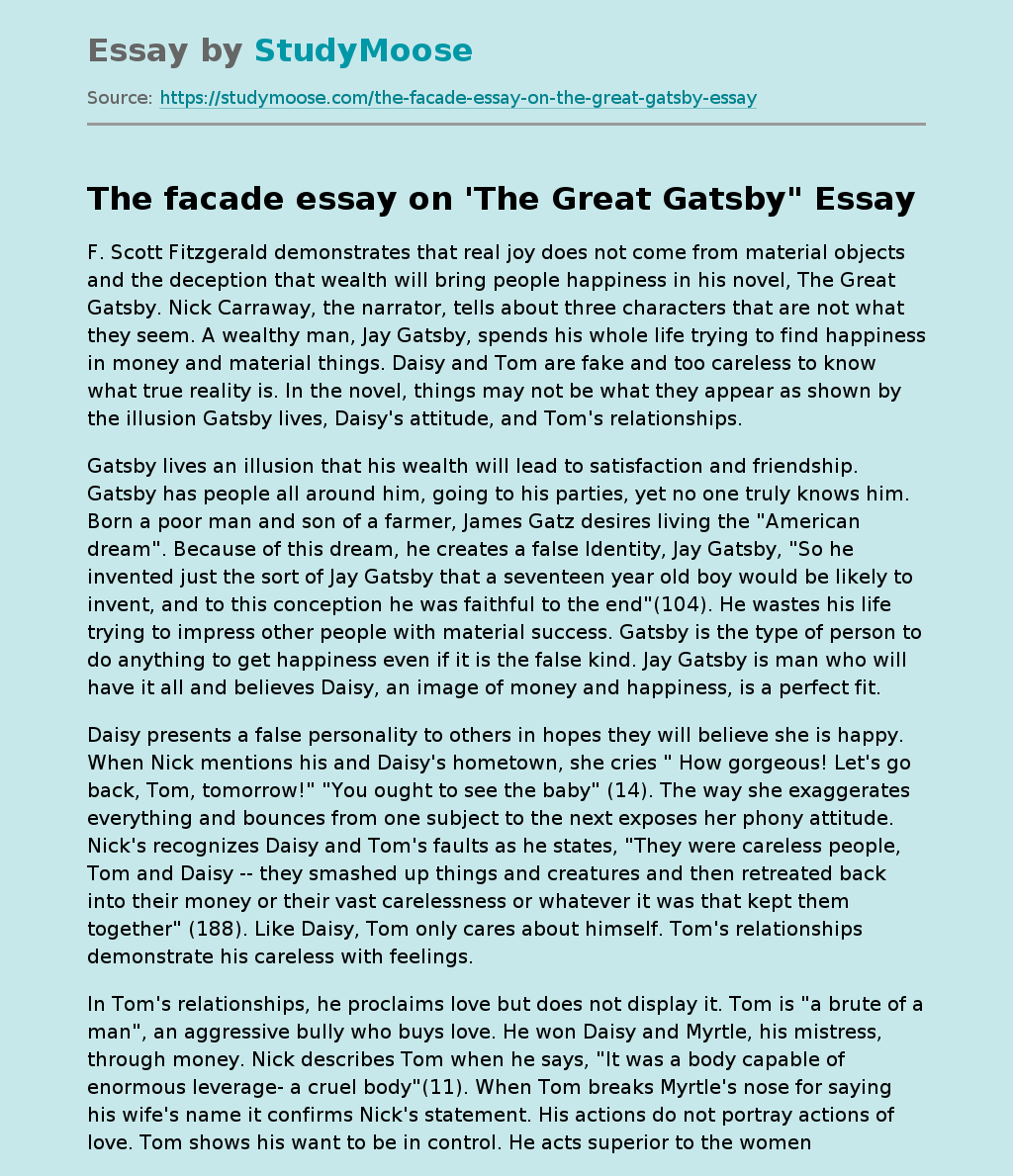