Joseph Addison, a pre-twentieth-century essayist, was an impressive writer. Within his lifetime, he wrote numerous essays and plays, compiled a book on the lives of seven authors, and translated Virgil’s Georgic. While he was alive, the Battle of Blenheim was fought, inspiring one of his most famous and poems. Much of his works were shaped by the contextual influences all around him.

Turn in your highest-quality paper
Get a qualified writer to help you with
“ Great Essentials for Happiness ”
Get high-quality paper
NEW! AI matching with writers

Addison was the oldest son of a reverend. He was born on May 1, 1672 in Milston, Wiltshire, England (Joseph Addison 1).

His family was very supportive of his writing, and often listened to his latest scribblings proudly. This attention and support is surely what started his successful writing career. Joseph Addison attended Lichfield Grammar School in Salisbury until he was fourteen years old. It was at that age that he was enrolled in the Charterhouse (an English independent school founded in 1611) in London (Joseph Addison 1).

While attending the Charterhouse school, he met Richard Steele, a man who became a great friend of Addison’s. In 1687, he moved on to enter Queen’s College, Oxford along with his friend Richard Steele (Biography of Joseph Addison 1). In college, he set himself apart by his scholarship and his shyness. After showing exceptional skill in Latin verse, he won the election for a position as a Demy (a scholar) to Magdalen College in 1689. He was a fellow there from 1697 to 1711, meaning that although he had graduated, he stayed on to work with some of the other graduates and professors in the pursuit of mutual knowledge (Joseph Addison 1). Addison lost no time after his graduation, immediately publishing a book on the lives and works of several of the great English poets. This book, along with a commemorative poem on the Battle of Blenheim, caught the attention of a few very influential people.

In Addison they saw a writer whose works could be potentially used in service to the crown (Biography of Joseph Addison 1). Through Lord Keeper Somers, an influential Whig statesman, and Charles Montague, later known as the earl of Halifax, Addison obtained a royal pension. This pension allowed him to travel abroad while studying politics and continuing to write essays (Joseph Addison (1672-1719) 1). His travels lasted from 1699 to 1704. During these five years abroad, Joseph Addison made the acquaintance of several English diplomats and European men of letters, one of which Addison himself had studied to become (Joseph Addison (1672-1719) 1). He started out in France and continued on to Italy, the place that was inspiration for his essay “Remarks on Several Parts of Italy” (1705) and the rhymed epistle “A Letter from Italy” (1704).

Below, a brief excerpt from Addison’s essay “Remarks on Several Parts of Italy” (1705) boasts of his luminous writing style and trademark lively personality while writing: THERE is certainly no Place in the World where a Man may Travel with greater Pleasure and Ad|vantage than in Italy. One finds something more particu|lar in the Face of the Country, and more astonishing in the Works of Nature, than can be met with in any other Part of Europe. It is the great School of Musick and Painting, and contains in it all the noblest Productions of Statuary and Architecture both Ancient and Mo|dern. It abounds with Cabinets of Curiosities, and vast Collections of all Kinds of Antiquities. No o|ther Country in the World has such a Variety of Governments, that are so different in their Constitu|tions, and so refined in their Po|liticks (1). When writing, Joseph Addison’s shy, unassuming personality hides away to release a much brighter and more amiable side of him. From there, his travels continued to Switzerland, where he came to an abrupt, albeit temporary, stand-still (Biography of Joseph Addison 1).

His travels were interrupted by some rather unfortunate news. While in Geneva during the March of 1702 he learned of the death of King William III, which resulted in his financial backers, Somers and Montague (the earl of Halifax), losing their positions (Joseph Addison (1672-1719) 1). This loss of income, however, did not prevent him from continuing his adventures abroad. He spent the next two years wondering through Austria, the German states, and the Netherlands before finding his way back into England in 1704 (Biography of Joseph Addison 1). Following his return to England, Joseph Addison was made (thanks in part to the publication of his poem The Campaign) the Under-Secretary of State. He kept this position for two years before becoming secretary and the keeper of records for the lord-lieutenant of Ireland (Joseph Addison (1672-1719) 1). In 1711, a change in the ministry lost him yet another government position, and he turned his eyes yet again towards writing as a means of occupation (Joseph Addison 1).

With renewed vigor he once again took to writing essays, this time doing the work for his old friend Steele’s paper, the Tatler. Joseph Addison contributed 42 works to the Tatler, which ran for about two years. Following the discontinuation of the Tatler in January of 1711, Joseph Addison and Richard Steele began publishing the periodical The Spectator (Joseph Addison (1672-1719) 1). One of his first essays published in The Spectator, “West Minister Abbey” is a beautiful example of the characteristic ease and elegance prose of his lifetime. Many of his essays during this time were a call to arms for the people of England, calling for them to rise to “higher levels of living and thinking” and aiming to awaken in them a passion to restore their great nation to its old glory.

The essay is gloomy, reflecting Addison’s own reflections on death and acknowledging it as the great provider of equity, for as he so eloquently states: Upon this, I began to consider with myself what innumerable multitudes of people lay confused together under the pavement of that ancient cathedral … how beauty, strength, and youth, with old age, weakness, and deformity, lay undistinguished in the same promiscuous heap of matter (2-3). The Spectator was published daily, and it grew to great popularity among the people of England. The Spectator’s political quips and insights into life and the state of their nation lent it a great deal of influence over the people of that time. Of the 555 or so essays featured in the periodical, Addison composed 274 (Biography of Joseph Addison 1). The Spectator lasted 3.5 years and was one of the few bright spots in Joseph Addison’s rather uneventful life, which was filled with personal disappointments (Joseph Addison (1672-1719) 1). One such disappointment was his marriage to the Dowager Countess of Warwick.

They were wed in 1716, and with his bride came a step-son who he had previously tutored. However, all was not bliss in the life of the newlyweds. His wife was said to be arrogant and unsatisfiable; constantly belittling him and pointing out his every short coming (Biography of Joseph Addison 1).. To make matters worse, he lost his position in Parliament due to his painfully overbearing shyness. He died a year later on June 17, 1719 (Joseph Addison (1672-1719) 1). Ironically, Joseph Addison wrote an essay titled “Defence and Happiness of Married Life” in 1712, four years before his unhappy marriage to the Dowager Countess. In this essay, he writes through the persona of Philogamus in support of marriage, listing the many advantages and enjoyments a married man may experience.

After taking a look at his life and then rereading “Defence and Happiness of Married Life” (1712) one finds it quite ironic to realize that one of the greatest joys of marriage as put-forth is one that he himself was denied in his own marriage: You must have observed, in your Speculations on Human Nature, that nothing is more gratifying to the Mind of Man than Power or Dominion; and this I think my self amply possessed of, as I am the Father of a Family. I am perpetually taken up in giving out Orders, in prescribing Duties, in hearing Parties, in Administering Justice, and in distributing Rewards and Punishments.

To speak in the Language of the Centurion, I say unto one, go, and he goeth; and to another, come and he cometh; and to my Servant, do this, and he doeth it. In short, Sir, I look upon my Family as a Patriarchal Sovereignty, in which I am my self both King and Priest (1). Joseph Addison took anything life happened to throw at him and managed to twist it into a delightful essay or haunting poem. Though his life was filled with disappointments, both in his personal life and in his political career, Addison managed to produce numerous essays and poems as well as a book and to top it all off, he co-produced three separate periodicals along with his friend Richard Steele. His writing hints at the contextual influences all around him. 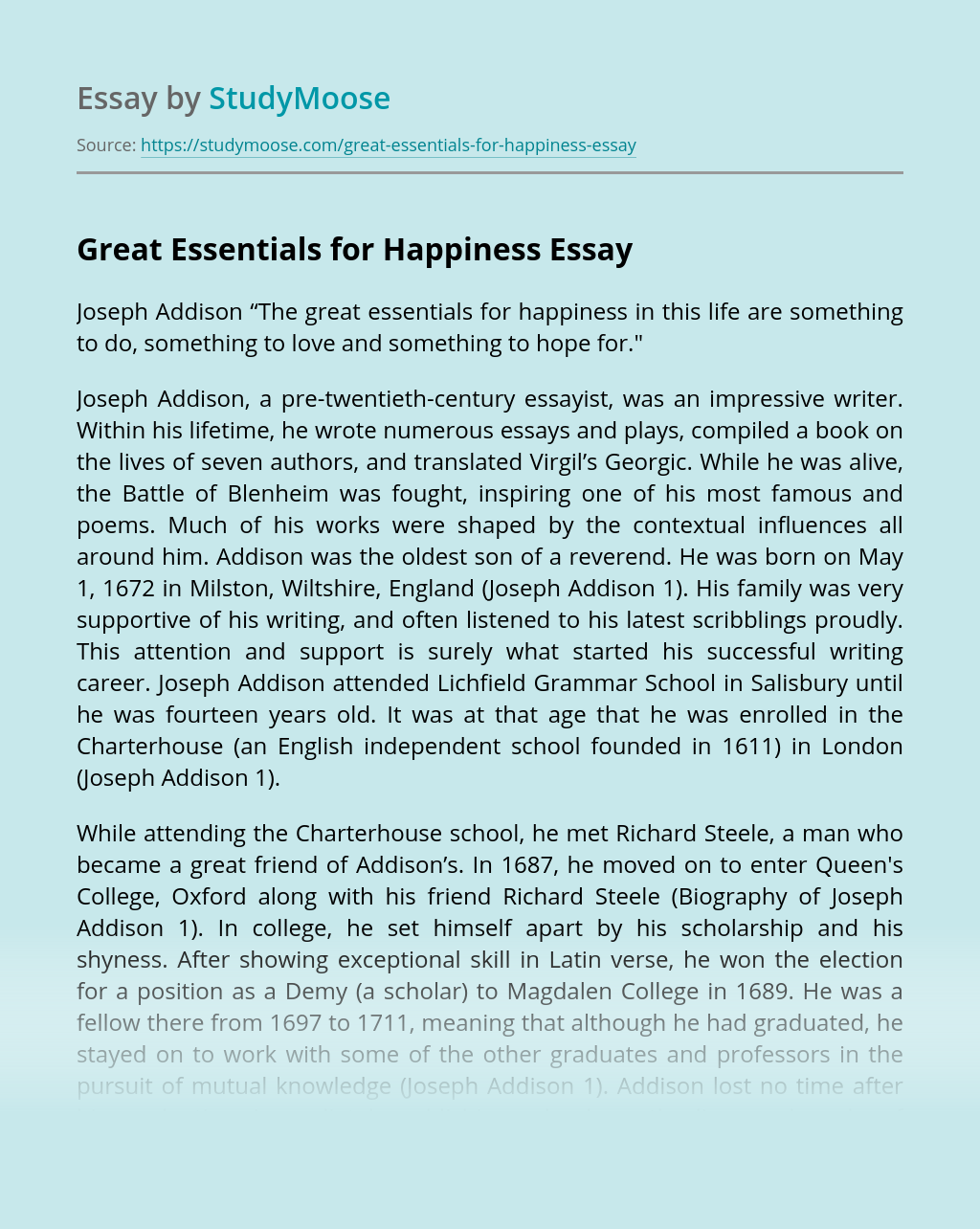 Turn in your highest-quality paper
Get a qualified writer to help you with
“ Great Essentials for Happiness ”
Get high-quality paper
Helping students since 2015
Stay Safe, Stay Original