The English Bill of Rights and Common Sense

Don't use plagiarized sources. Get your custom essay on
“ The English Bill of Rights and Common Sense ”
Get custom paper
NEW! smart matching with writer

The English Bill of Rights came after the reign of the first two Stuart kings, James I (1603-1625) and his son Charles I (1625-1649). Both kings ran into problems with the House of Commons over religious, economic and other political issues. The birth of James’s II son led to the Glorious Revolution of 1688-1689. The revolution resulted in Mary II and her husband, William of Orange of Holland taking the Crown and signing the English Bill of Rights.

The Cahier of the Third Estate of the City of Paris resulted after Louis XVI of France could not balance the national budget. In an attempt to correct the budget problem, Louis called the Estates General, France’s representative assembly, to convene in the hopes it would establish new taxes that would balance the nation’s budget.

The convening of the Estates General had a much larger effect on France than Louis had expected. At the assembly, the forty thousand attendants wrote cahier de doleances, which listed local and national issues that needed to be addressed. The cahier of the Third Estate of the city of Paris was a document that contained the grievances of many people including: lawyers, businessmen, upper-middle-class, peasants, artisans, shopkeepers and women. Due to the Estates General, the nobility lost most of their privileges and the king lost most of his power. Later, in 1793, Louis was beheaded as a traitor.

Common Sense was a 35 page political pamphlet written by Thomas Paine in 1776. During the beginning of the American Revolution, many Americans still hoped that America could reconcile with Great Britain. Paine wrote the pamphlet as a reaction to the Battle of Lexington and Concord in April of 1775. Paine’s pamphlet expressed many American’s worries concerning Great Britain, as well as the Colonies’ hopes to create their own free independent nation. Common Sense encouraged the Second Continental Congress to create the United States of America on July 2, 1776. The pamphlet also contributed to the United States Declaration of Independence from Great Britain on July 4, 1776.

There are several major similarities between the three political texts. Each text was written at a time of political revolution within their country and each was written as a reaction to current political hardships. Another major similarity all three texts shared was the importance of freely elected representatives. The timing of the documents as well as the configuration of assemblies plays a large role in the restructuring of their countries.

Although all three documents shared similar characteristics, there were differences between the English Bill of Rights, the Cahier of the Third Estate and Common Sense. Each document addressed issues that were specific to their individual needs as a country. Although the problems addressed may not have been unique to their country, the fact that their political text contained a remedy to the problem is distinctive.

The Cahier of the Third Estate went on to state that citizens had a right to call a lawyer before interrogation began. The document also declared that all citizens should receive the same punishment for their crimes, no matter their rank in society. The final major change dealing with punishments for crimes was the ending of torture and dungeons. Cleanliness and moral rules were set in place for prisons. The Cahier of the Third Estate established that prisons are for securing prisoners, not punishing them. The French political text also put an end to many other hardships including: personal servitude, compulsory military service, tampering with the mail, hunting monopolies and exclusive privileges.

Although the English Bill of Rights and the Cahier of the Third Estate were both a list of grievances, neither document attacked the current political order with the zeal that Common Sense contained. Thomas Paine ripped apart the political structure of Great Britain and declared that the American constitution should have no resemblance to that of England. Paine believed that the constitution of England was far too complex and its complexity had caused many years of hardship.

Paine also believed that hereditary succession was wrong and should not be practiced. Common Sense asserted that the American constitution should be based on “union, faith and honor.” Paine expressed two major exceptional ideas in Common Sense. Paine believed that in America a President, and not a King, should head the executive branch of government. Paine also believed that all laws should be passed by a majority of the assembly, or Congress. Paine suggested that a majority should be considered no less than three fifths of Congress.

England, France and America all went through political revolutions within a relatively close time period. As a result of the new political ideals, in each country a text was written upon which the future government was to be based. Although each of the documents contained distinct characteristics, the major ideas and end results were very similar for each country.

The English Bill of Rights and Common Sense. (2016, Jul 16). Retrieved from https://studymoose.com/the-english-bill-of-rights-and-common-sense-essay 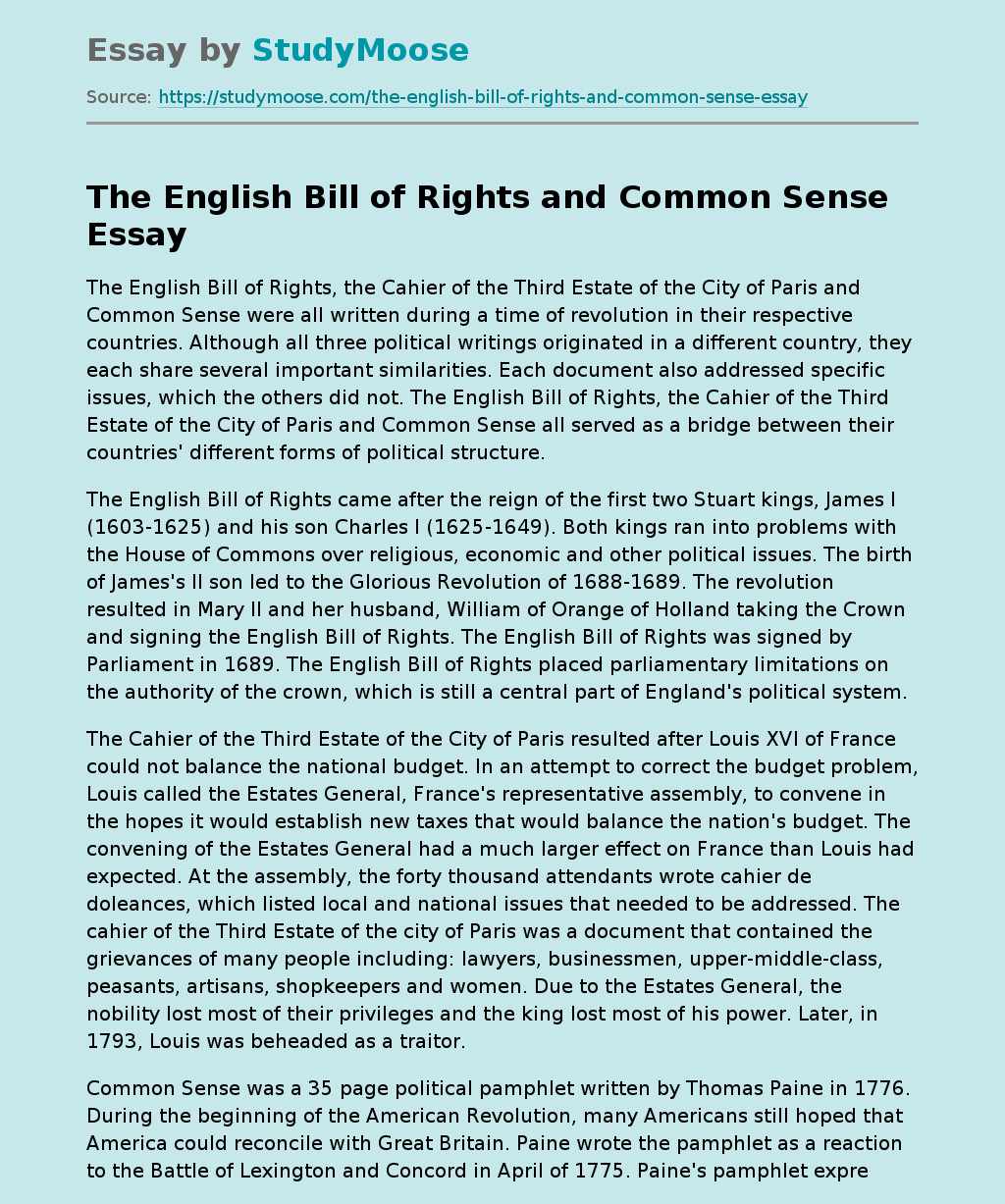