The elderly was the chosen life span stage due to the interesting notions of statistics that surround it and the ever-changing differences in life span throughout the decades and what the reasons for these changes are. Within the United Kingdom, the population of those living in it has slowly progressed over the decades as well as the age in which citizens were living to, in the year 2017 the number of over 85’s living in the United Kingdom was 2.7 times the amount that were living back in the 1970’s and this number is expected to keep increasing throughout the years.

Don't use plagiarized sources. Get your custom essay on
“ The elderly was the chosen life span stage due to the interesting ”
Get custom paper
NEW! smart matching with writer

Not only this, but the causes of death have changed and the prevalence of the illness in terms of time has massively increased, with aged decades often having short periods of illness, to modern day society upholding long periods of treatment and illnesses (GOV.UK, 2019).

In Abraham Maslow’s 1943 paper A theory of Human Motivation he created a psychosocial theory of hierarchy of needs.

The theory describes the stages humans develop and parallels many other theories (Maslow, 1943). Maslow’s classification system reflects universal needs of groups as its foundation then further develops emotional needs (Deckers, 2018). Maslow’s hierarchy of needs is represented by a pyramid where an individual’s most basic set of needs are at the bottom and relays must be met in order to become motivated to move onto another level. The psychological need is considered the first step of basic needs that is required to be fulfilled for human survival and to move up to the next step.

Psychosocial requirements entail homeostasis, nutrition and social elements including shelter and sleep (Mcleod, 2019). For a person’s safety and security needs to be met their psychosocial wellbeing should be paramount. These psychosocial needs highlight financial security, good health and protection from illness. Social belonging attributes to the third level of the hierarchy and develops the importance of being orientated to a sense of belonging, attributes include good relationships with friends and family and healthy levels of intimacy. According to Maslow (1943), people must love as well as to feel loved in order to achieve sustainable relationships. Moving on to another level self-esteem is that of entailing a sense of concern when it comes to building status and gaining respect from other counterparts. The quotation “What a man can be he must be” forms the basis for the next level of self-actualisation, this helps to advocate a person’s potential to achieve full satisfaction of their development when it comes to personal skills, examples include parenting and exceeding talents (Maslow and Murphy, 1954).

With the chosen life span being that of the elderly, according to Maslow’s (1943) hierarchy of needs theory in late adulthood shows that whilst many people age to a healthy proportion, some possess health issues that stop them from meeting their needs as an individual and therefore often need help from those of healthcare professionals examples being carers, nurses, doctors and physiotherapists. Zuhike (2019) further emphasises the importance of self-actualisation in late adulthood, explaining that within this stage of life, people often become more understanding of their own abilities and acknowledge who they are as an individual, more so than when they were younger. They highlight that this is due to them having a long period of time to work this out, however when they become closer to death, they can lose perspective and not self-actualise at all.

On the other hand, Thompson, et al (2016) state that self-actualisation can help to prevent health problems as studies have shown that those who have self-actualised to a healthy level are more likely to engage in health promotion whilst those who are left with unmet needs are less likely to do so. They further conclude that these ideas have implications on a wide variety of health-related illnesses and decisions, when it comes to cancer prevention via smoking cessation, cancer screening and vital vaccinations. However also considering that it is not always down to not achieving self-actualisation but that is can also have something to do with educational backgrounds, those with more educational prospects being more likely to follow healthy behaviours.

When caring for somebody who may not have high levels of self-actualisation, helping them to overcome this could be very important to them when out in the workplace. As a healthcare professional, helping an aging person to create a bucket list of things which they have always wanted to achieve but may not have been able to may help to overcome their burdens and start to gravitate towards a more fulfilled life before they die. This could then combine to prevent ill health from occurring and poor life choices. LaBianca (2019) writes how psychologists believe that bucket lists are “helpful in that they’re a way of listening to your inner wisdom” and are likely to create a more meaningful life.

When it comes to those who may be less educated than others, there are a variety of different pathways in which healthcare professionals can address this issue. One of them would be to begin to educate them as much as possible with different options to help them give up smoking. The Royal College of Nursing (2019) list the ways in which somebody can cut down on smoking, including nicotine replacement therapy by the means of patches, vaping and gum replacements. Also, Electronic Nicotine Delivery Devices including e-cigarettes whereby service users can combine both nicotine and electronic devices or simply just use their device alone. The King’s Fund (2016) introduced a national policy to help combat the impact of the NHS in reducing health inequalities, this was called Making Every Contact Count and consisted of ensuring every healthcare professional tried to make a positive outcome for the patient’s in their care, including that of health promotion. With health promotion always comes choice and respecting patient’s autonomy is principal within healthcare. Sk?r (2010) define autonomy as having the right to make decisions and the freedom to act upon one’s own wants and wishes, in relation to healthcare being that of understanding that each service user has this right to autonomy and should be maintained and respected at all times.

The elderly was the chosen life span stage due to the interesting. (2019, Dec 06). Retrieved from https://studymoose.com/the-elderly-was-the-chosen-life-span-stage-due-to-the-interesting-example-essay 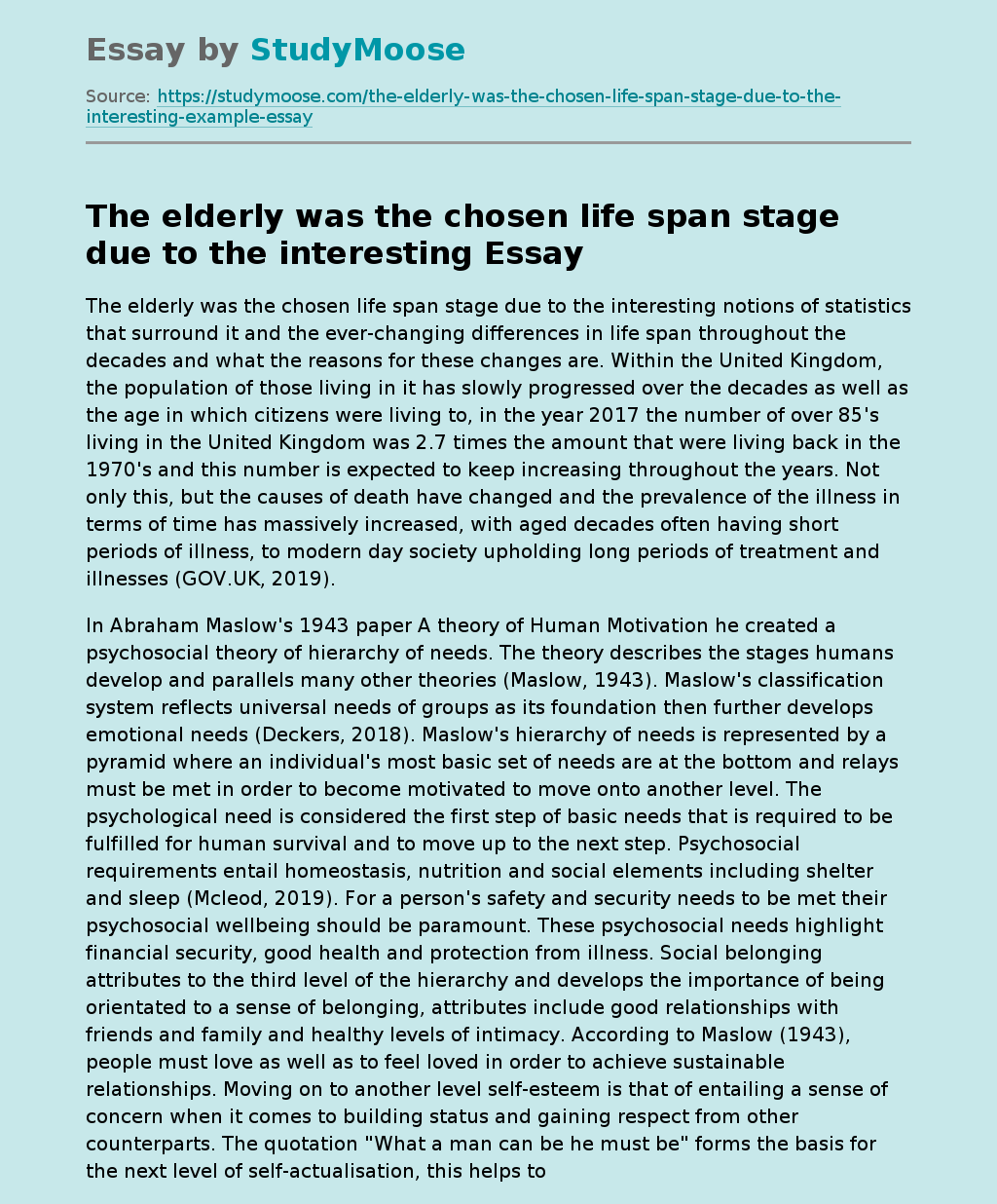