Comparison of Two Poems About Women

The poems “A Stone’s Throw” and “The Woman Who Speaks To The Man Who Has Employed Her Son” both deal with different views of women and how they are treated. The speakers in each poem have different attitudes towards women and various devices are utilized to illustrate the treatment of women in each poem. In the poem “A Stone’s Throw”, a group of self-righteous men earnestly wanted to stone and condemn an indecent prostitute when they said, “We’ve got her! Here she is!… We caught her.

Turn in your highest-quality paper
Get a qualified writer to help you with
“ Comparison of Two Poems About Women ”
Get high-quality paper
NEW! AI matching with writer

” This shows that the mob of men was eager to stone and brutalize the woman.

The speaker was part of the crowd that wanted to stone the woman and he felt his actions were justified. The mob “roughed her up” and justified their cruelty by describing it as “nothing much”. The speaker continuously justified his brutality towards the woman by saying, “For justice must be done specially when it tastes so good.

” This further showed that the sadistic speaker would thoroughly enjoy brutalizing and stoning the woman because he claimed it to be an act of “justice” and described it as tasting so good.

Suddenly, someone interrupted the mob and “spoilt the whole thing. ” A “guru, preacher, God-merchant, God-knows-what“ approached the mob and then knelt by and spoke to the woman. The speaker addressed the man in a scornful and disrespectful manner and implied in brackets that “(should never speak to them)”. This shows that the speaker was condescending towards the woman and referred to the woman and prostitutes as ”them”.

The “preacher” squatted to the ground at “her level” and looked at the woman and then judged the crowd.

The woman looked and judged the crowd and hence, the crowd in turn looked upon themselves. The “preacher” “saw in her something we couldn’t see” and this shows that the “guru” valued the woman although she was a prostitute. The mob of men “walked away still holding stones that we may throw another day. ” This clearly showed that the speaker still retained a judgmental and condescending attitude. The mob displayed no repentance or retribution for their actions. This poem also alludes to the Bible where Jesus condemns a mob of men for wanting to stone a prostitute.

However, in the poem “The Woman Speaks To The Man Who Has Employed Her Son” the speaker described a relationship between a single mother and her beloved child. The speaker addressed the man who employed the mother’s son. This poem was about a single mother lamenting her son’s lifestyle choices. She was distraught that he chose a life of crime. The mother loved her son dearly and “carried him full term tight up under her heart. ” She had immense faith and she set no barriers or limits to what her son could achieve. She “set no ceiling on what he could be doctor. arth healer, pilot.. ” and this shows that she supported and had great faith in him. She “carried him like the poor carried hope,’” and this evinces that she depended on him for a better life because she hoped that he would achieve greatness and a prosperous life. The father of the child abandoned his family and thus the woman “raised him twice, once as a mother, then as a father”. The son decided to work for a man who gave him “one whole submachine gun for him alone” and the mother became distraught and worried.

She lamented his life of crime and bought “black cloth” in preparation for the day that her son will “draw his bloody salary. ” The son looked up to his employer as a father figure but the mother contested and wondered what kind of father would give a son “a hot exploding death. ” This shows that the employer does not care about the woman’s son. The mother realized that she was powerless and fervently prayed and said “Psalms” for her son and his employer. “She weeps for his soul and her eyewater covers you. ” This means that the mother was in great agony and sadness because she wept with great fecundity.

The mother was devastated with the fact that her son chose a life of crime and that she felt powerless. The speakers’ attitudes towards women in both poems are different. The speaker in “A Stone’s Throw” has a very negative, condescending, judgmental and disrespectful attitude towards women. The speaker condemns the woman in the poem and scorns her. He wants to execute justice by stoning the woman. However, the speaker in “The Woman Who Speaks To The Man Who Has Employed Her Son” has a slightly positive, respectful, admiring yet sympathetic attitude towards the mother.

The speaker is sympathetic towards the mother because her beloved son chose a life of crime and disregarded his mother’s warnings, hopes and dreams. The mother laments greatly because she knows her son will die due to his new job. The speaker thus feels compassion and pities the woman due to her circumstances. This contrasts greatly to the harsh, cruel and condescending attitude of the speaker in “A Stone’s Thow”. The speaker’s disrespectful, callous and condescending attitude is evident through his rough actions with the woman. And if our fingers bruised her shuddering skin, these were love-bites compared to the hail of kisses of stone,” This fully illustrates the rough brutalization of the woman by the speaker. To further show the speaker’s arrogant and condescending attitude, he justifies his actions and dismisses his brutal actions by describing them as “love-bites”. The cruel uses of words such as “assault, battery, frigid rape,” also evince the speaker’s brutal character and his lack of remorse. This shows that the speaker treats women terribly and has a very scornful, harsh and negative attitude towards women.

The speakers in the two poems possess highly contrasting attitudes towards women. The speaker in “The Woman Who Speaks To The Man Who Has Employed Her Son” has a very sympathetic attitude to the mother but has a respectful and admiring attitude towards women in general. The speaker admires the woman’s strength as a single mother that “raised him twice, once as a mother and once as a father” and that the woman “carried him full term tight up under her heart. ” This shows that the mother carried her son for the full nine months of the pregnancy and did not abort the baby.

This evinces the strength of the woman because the unbiased and indifferent” father of the child abandoned her. The speaker feels compassion and pities the mother because she is powerless and all she has is “a mother’s tears.. and prayers. ” This shows the pain and heartache the woman is experiencing and thus the speaker relates and pities the woman. The device used most efficaciously to illustrate the treatment of women in the two poems is allusion. An allusion is a figure of speech that makes a reference to a person, place, event or another literary work. The allusion used in both poems is an allusion to the Bible.

The self-righteous mob of men justified their barbaric and cruel actions by professing that they were carrying out “justice”. This shows that women were treated terribly and unjustly. Similarly, in the poem “The Woman Who Speaks To The Man Who Has Employed Her Son” there are various biblical allusions. This poem alludes to “Judas Iscariot’s mother,” “the thief on the left hand side of the cross,” and “Absalom”. All of these characters were mentioned in the Bible and hence the poem alludes to the Bible. Judas Iscariot’s mother was the mother of one of Jesus’disciples who had betrayed him.

Judas betrayed Jesus, yet Jesus still loved and forgave Judas. This can be applied to the mother and her son in the poem. The mother felt deeply betrayed by her son and wished he had not chosen a life of crime. However, despite the sorrow and hurt by the betrayal of her son, she loved him and said “psalms” for her son. This clearly evinced that women were treated negatively. The son failed to value and listen to his mother by betraying her. In the Bible, Absalom revolted against his father, king David. The rebellion was unsuccessful and Absalom died.

This can be attributed to the mother and her son in the poem because the son rebelled against his mother. This clearly showed the lack of respect towards women because her son did not respect or listen to her. The fact that Absalom died in the Bible, evinced the mother’s fear for the life of her son. The mother was certain that her son would die and felt helpless. The mother was not able to control neither her son’s decisions nor the employer’s decisions. This showed the lack of respect for mothers and women. The Biblical allusions in both poems convey the negative treatment of women in the two poems.

Comparison of Two Poems About Women. (2016, Sep 13). Retrieved from https://studymoose.com/comparison-of-two-poems-about-women-essay 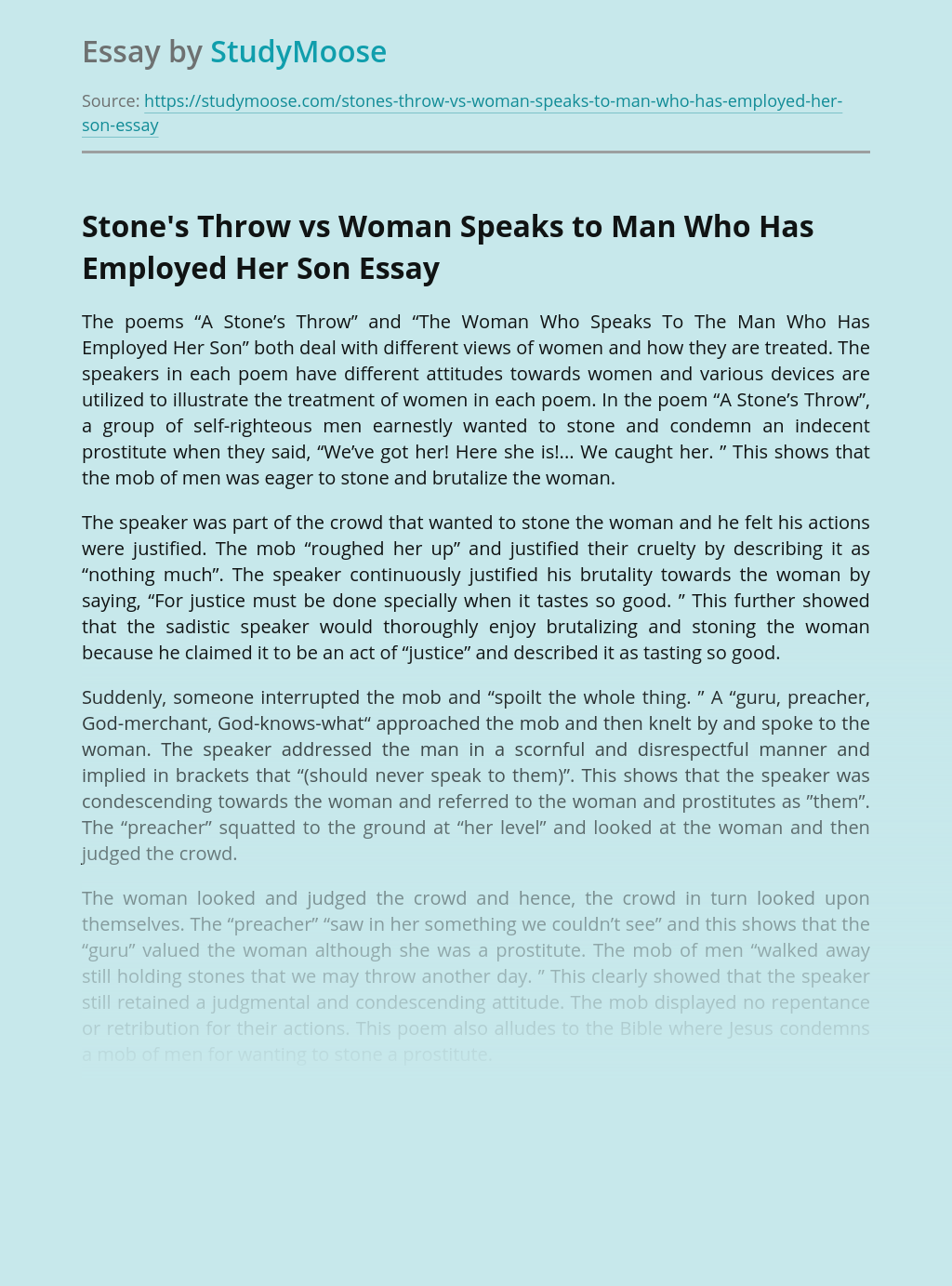 Turn in your highest-quality paper
Get a qualified writer to help you with
“ Comparison of Two Poems About Women ”
Get high-quality paper
Helping students since 2015
Stay Safe, Stay Original