The Effects of Social Media on the Youth of Today

Media is everywhere. It is an inseparable part of every teenager’s life. Historically, newspapers were the most common of media, but today cell phones and other electronic devices have taken over all forms of communication. Teenagers and young people today depend on the media for information about everything – the latest gadgets, fashion trends, the newest cars on the market, the best places to eat out in the country or finding out what their favourite celebrity is up to. Media controls teenagers’ minds like a giant remote control.

Don't use plagiarized sources. Get your custom essay on
“ The Effects of Social Media on the Youth of Today ”
Get custom paper
NEW! smart matching with writer

In general, teenagers would be involved in some sort of media communication for up to four hours a day. Most teenagers spend two hours watching television and one and a half hours is spent surfing the internet each day. Many teens usually spend sleepless nights on social media without the knowledge of their parents. This disruption of sleep has had numerous effects on teenagers. It has led to cases of insomnia, mood swings and increase obesity.

Studies have also shown that, certain groups of teenagers are prone to violence because of media influence. Watching too much television takes teenagers further away from school work and homework crippling them academically. Teenagers who while away time watching television are at a higher risk of developing obesity seeing that inactivity is a major factor when slumped in front of the television. Advertising and movies propel the idea of bad habits being “cool”, this has caused teenagers to pick up their first cigarette as early as fourteen years old.

Even the use of alcohol and drugs are creeping in at an early age. The influence is heavy when it comes to music videos, explicit movies, advertising and television shows. Teenagers often watch commercials that plant a seed of thought into their minds about what they have to buy and use as opposed to what they actually need.

Fashion magazines are also to blame for their glossy covers show-casing models with so-called perfect bodies that teenagers idolise and work towards, while of course compromising on their health. Some social networking sites are also used as a medium to bully others. Teenagers who have been bullied by others on such websites would feel depressed and suffer from emotional disorders. Teenagers who have been bullied may also commit suicide because they are not mature enough to face such a big challenge. Television and cell phones also take up time from physical activities and family time. Media has also caused the youth of today to become more anti-social and hostile. The negative influences of media that are a result of an overexposure to it are most often talked about. It is true to a certain extent that media has affected the society in a negative manner.

But undoubtedly, media has proved being a bliss. Television can be used as an educational tool if used wisely and when supervised by parents.

Educational shows are always streaming on television, where teenagers can learn a lot from them. Social networking sites give teenagers a platform to interact with friends and connect with others, although that shouldn’t allow internet time to be too flexible. Print media is also a way of being well-informed about what goes around the world, where it can develop a teenager’s reading skills as well, seeing that it is a dying habit among the young. Socialising online can give shy and socially awkward teenagers a comfortable way to communicate. This can boost their self-esteem and help them practice their social skills. Studies have shown that teenagers who have computers in their rooms did academically well, seeing that the Internet served as a way to keep them interested in assignments, homework and projects.

Teenagers can also develop problem-solving or critical thinking skills by playing computer games. The media can be used as a weapon or stepping stone depending on how one uses it. Teenagers need to be sat down with their parents where discussions on these vital outlets are necessary. If parents need to be assured that they children won’t turn out to be depressed, obsessed or disturbed, then it is important that the relationship between the two is strong.

The Effects of Social Media on the Youth of Today. (2016, Mar 17). Retrieved from https://studymoose.com/the-effects-of-social-media-on-the-youth-of-today-essay 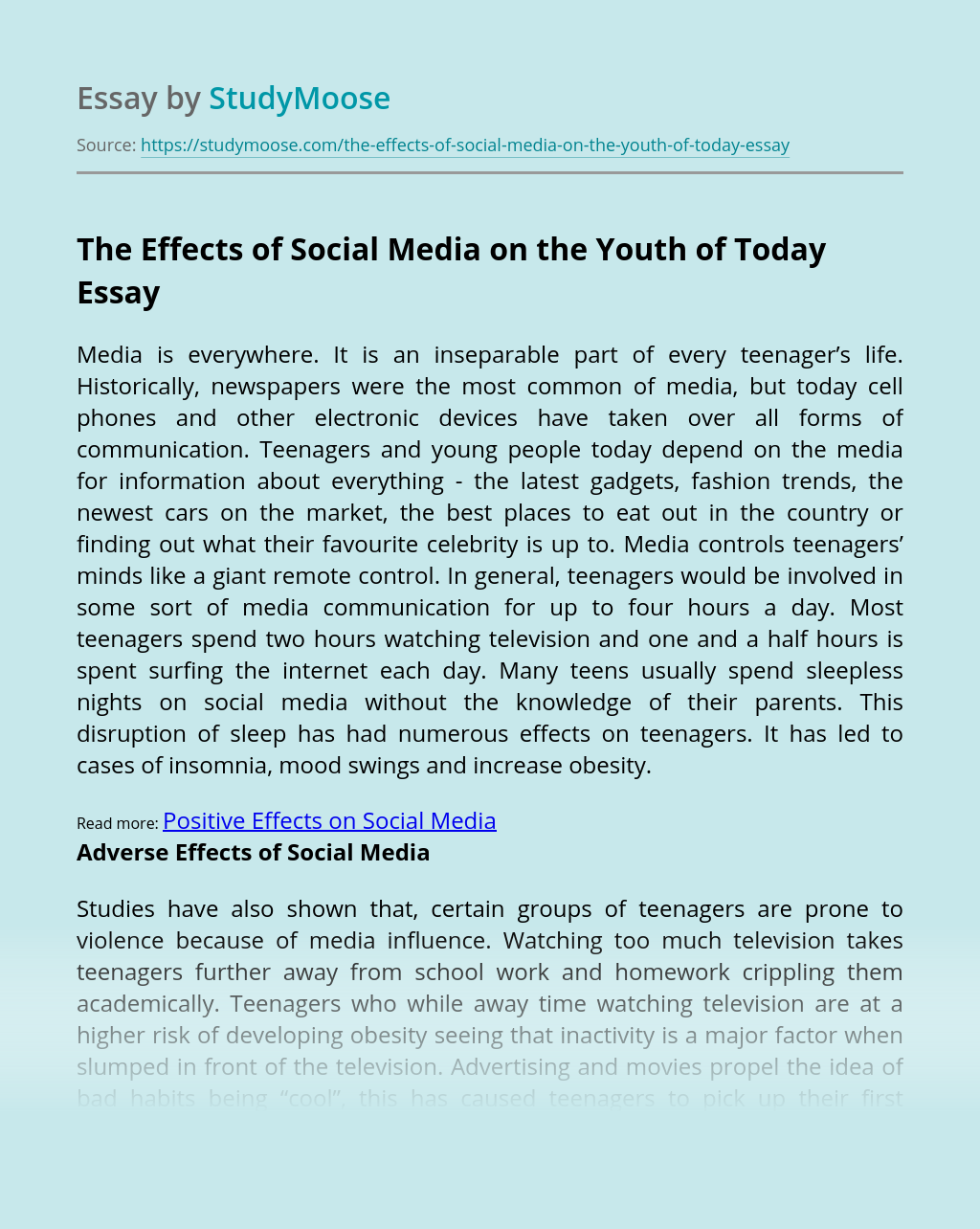