The Effectiveness of the Law in Achieving Justice

Don't use plagiarized sources. Get your custom essay on
“ The Effectiveness of the Law in Achieving Justice ”
Get custom paper
NEW! smart matching with writer

Other issues that emerge from relationship breakdowns may also relate to wills and property. Wills

A will is a document that states how a person intends to distribute their property and assets after their death, on many occasions during a marriage, spouses will write wills that leave property for their spouse. Under Section 13 of the Succession Act 2006 (NSW), a divorce or an annulment of a testator’s marriage will deem any beneficial disposition for the former spouse to be void.

The presence of this section can be incredibly effective as spouses may pass before getting the opportunity to amend their wills. As wills are made in anticipation of the marriage, the Succession Act ensures that the change in the relationship status reflects how the will is handled in the event that the testator passes before they are able to change their will. This ultimately achieves justice for the testator for it is highly likely that they would not have wanted their previous spouse to have inherited their property as they are no longer in a relationship.

Property
‘Property’ within a marriage has a broad definition that includes homes, bank accounts, shares and household goods. Disputes arising from the distribution of property are frequent when relationships breakdown, to combat this there are guidelines to determine how property is allocated under the FLA (s 75 and s 79 for married couples, s 90SF and s 90SM for de facto spouses). There are several factors that are taken into consideration when disputes regarding property allocation are heard in the Family Court. The financial and non-financial contributions to property by each party are considered as well as their age, income and resources. Financial commitments to supporting themselves as well as parties’ eligibility to pensions, allowances and benefits and their ability to maintain a reasonable standard of living count towards the final decision.

The presence of having the duty of care for a child whether it be of the marriage or not may affect how the property is distributed. If it so happens that the separating couple have reached a mutual agreement to how the property is allocated they may formalise it to ensure it is binding by applying to the Family Court for a consent order or enter a financial agreement. The legal system in the case of dealing with property allocation disputes is resource efficient in that it allows separating couples to choose whether they will resolve the issue themselves or allow a third party in the form of mediation of the court to aid the distribution. This achieves justice for involved parties as they are not forced to use the court system however if they do resort to it, factors and contributions for both parties are considered to conjure a fair and equitable outcome for all. Children

Although children do not have a spousal role within a marriage or de-facto relationship, they are still considered as a party that is involved when a relationships breaks down. The legal system is focused more on the needs and best interest of the child rather than the ‘parental rights’ and ‘parental responsibility’ of the parents. The UN Convention on the Rights of the Child contains two Articles that are particularly relevant to the situation a child is put in when their parents are separating or divorcing. Article 3 outlines that the best interests of the child shall be the primary consideration when actions involving the child are undertaken such as their care and protection. Article 12 states that the child have the right to voice their views and opinions when decisions are being made that affect them as well. CROC itself as an international agreement, is not legally binding on Australia thus its level of enforceability is not as great as domestic laws.

However CROC may be used for interpretation of terms such as ‘best interests of the child’ on the fields of justice. The Children and Young Persons (Care and Protection) Act 1998 (NSW) (CYPCPA) is another legislative piece that governs processes relating to children. Section 9 and 10 of the CYPCPA makes references to Article 3 and 12 of CROC respectively, rendering the Articles within CROC to have legal weight. CYPCPA is an incredibly effective piece of legislation due to its ability to give the Articles within CROC legal standing as well as concentrating particularly on the care and protection of the child which includes their care under parental responsibilities. CROC and CYPCPA are extremely effective in achieving justice for children within a relationship breakdown because the law becomes more accessible for children due to the law emphasising the needs and interests of the children before the parents as children may be too young to understand their situation themselves. Dispute resolution methods

Laws that have effect in Australia cover the wide range of issues that emerge from relationship breakdowns. In theory they are extremely effective in achieving justice for parties such as the spouses and children involved through considering the rights of the parties and ensuring its accessibility for all. However many of these orders and resolutions do not have any physical means of enforcement thus undermines the enforceability. Overall the law in Australia is effective in achieving justice for parties involved with relationship breakdowns.

The Effectiveness of the Law in Achieving Justice. (2016, Apr 05). Retrieved from http://studymoose.com/the-effectiveness-of-the-law-in-achieving-justice-essay 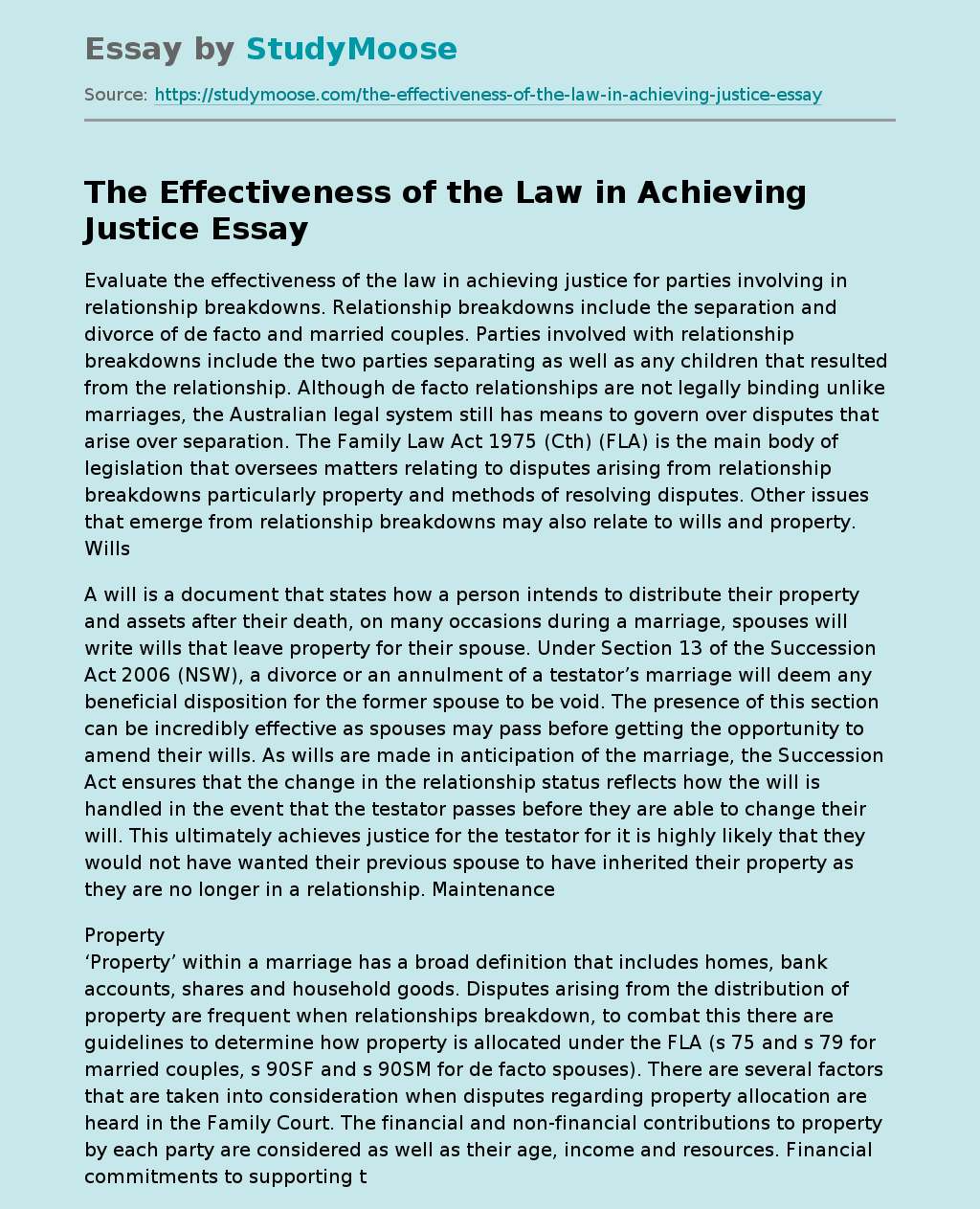