The Philippines was praised worldwide in 1986, when the so-called bloodless revolution erupted, called EDSA People Power’s Revolution. February 25, 1986 marked a significant national event that has been engraved in the hearts and minds of every Filipino. This part of Philippine history gives us a strong sense of pride especially that other nations had attempted to emulate what we have shown the world of the true power of democracy. The true empowerment of democracy was exhibited in EDSA by its successful efforts to oust a tyrant by a demonstration without tolerance for violence and bloodshed.

Don't use plagiarized sources. Get your custom essay on
“ The Edsa Revolution ”
Get custom paper
NEW! smart matching with writer

Prayers and rosaries strengthened by faith were the only weapons that the Filipinos used to recover their freedom from President Ferdinand Marcos’s iron hands. The Epifanio de los Santos Avenue (EDSA) stretches 54 kilometers, where the peaceful demonstration was held on that fateful day. It was a day that gathered all Filipinos in unity with courage and faith to prevail democracy in the country. It was the power of the people, who assembled in EDSA, that restored the democratic Philippines, ending the oppressive Marcos regime.

Hence, it came to be known as the EDSA People Power’s Revolution.

The revolution was a result of the long oppressed freedom and the life threatening abuses executed by the Marcos government to cite several events like human rights violation since the tyrannical Martial Law Proclamation in 1972. In the years that followed Martial Law started the suppressive and abusive years–incidents of assassination were rampant, particularly those who opposed the government, individuals and companies alike were subdued.

The Filipinos reached the height of their patience when former Senator Benigno “Ninoy” Aquino, Sr. was shot and killed at the airport in August 21, 1983, upon his return to the Philippines from exile in the United States. Aquino’s death marked the day that Filipinos learned to fight. His grieving wife, Corazon Cojuangco-Aquinoshowed the Filipinos and the world the strength and courage to claim back the democracy that Ferdinand Marcos arrested for his personal caprice. Considering the depressing economy of the country, Ninoy’s death further intensified the contained resentment of the Filipinos.

In the efforts to win back his popularity among the people, Marcos held a snap presidential election in February 7, 1986, where he was confronted with a strong and potent opposition, Corazon Aquino. It was the most corrupt and deceitful election held in the Philippine history. There was an evident trace of electoral fraud as the tally of votes were declared with discrepancy between the official count by the COMELEC (Commission on Elections) and the count of NAMFREL (National Movement for Free Elections). Such blatant corruption in that election was the final straw of tolerance by the Filipinos of the Marcos regime. Thedemonstration started to break in the cry for democracy and the demand to oust Marcos from his seat at Malacañang Palace. The revolt commenced when Marcos’ Defense Minister Juan Ponce Enrile and the Armed Forces Vice-Chief of Staff command of Fidel V. Ramos, both withdrew their support from the government and called upon the resignation of then President Marcos.

They responsibly barricaded Camp Crame and Camp Aguinaldo and had their troops ready to combat against possible armed attack organized by Marcos and his troops. The Catholic Church represented by Archbishop Jaime Cardinal Sin along with the priests and nuns called for the support of all Filipinos who believed in democracy. Radyo Veritas aired the message of Cardinal Sin that summoned thousands of Filipinos to march the street of EDSA. It was an empowering demonstration that aimed to succeed peacefully with the intervention of faith. Nuns kneeled in front of tanks with rosaries in their hands and uttering their prayers. With the power of prayers, the armed marine troops under the command of Marcos withdrew from the site.

Celebrities expressed their support putting up a presentation to showcase the injustices and the anomalies carried out by the Marcos administration. Finally, in the morning of February 25, 1986, Corazon Aquino took the presidential oath of office, administered by theSupreme Court Associate Justice Claudio Teehankee at Club Filipino located in San Juan. Aquino was proclaimed as the 11th President of the Republic of the Philippines. She was the first lady president of the country. People rejoiced over their victory proving the success of the EDSA People’s Power Revolution, the historic peaceful demonstration. Although in 2001, there was an attempt to revive People Power in the efforts to oust then President Joseph Estrada, it was not as strong as the glorifying demonstration in 1986. The bloodless, People Power Revolution in EDSA renewed the power of the people, strengthened the meaning of democracy and restored the democratic institutions of government.

Corazon Aquino: The Story of a President by Lucy Komizar

Several days later, though, when “mopping-up operations” carried out by Aquino’s troops had failed to quell street fighting in Makati, Manila’s financial district, U.S. officials were pushing a different line. No longer did they describe the American F-4s as decisive. “We’re not very involved . . . in terms of our resources,” backtracked Pete Williams, a Defense Department spokesman, as fighting moved into its fifth day. “This is essentially a fight that (the Filipinos) are carrying out,” said Richard A. Boucher, a State Department official. Such American disclaimers are depressingly familiar to students of the postwar, post-colonial “special relationship” between the two countries. When things are going well in the Philippines, U.S. officials eagerly claim their share of the credit. But when events turn unpleasant, the official talk tends to dwell on America’s “limited leverage” in the distant archipelago.

This inconsistency of American rhetoric is central to the pathology of Philippine-American relations. In 1981, George Bush saw fit to proclaim America’s “love” for Ferdinand E. Marcos because of his “adherence to democratic processes and principles.” Not that many years later, Marcos was the evil dictator, a man who had oppressed his people and was thus unworthy of American support. The “special relationship” was not as special as it was presumed to be. The U.S. government would indulge Marcos the dictator while he was able to maintain domestic order, thereby promoting American interests in the Philippines. When his control slipped, he was expendable. American attitudes toward the sixth attempt to oust his successor further demonstrate the conditionality of “special relations.”

Extraordinary actions to support Aquino will be taken so long as she seems able to hold things together. But if the center begins to unravel, expect the United States to distance itself from the Aquino government or even to give its support to a faction or leader it perceives to be a more reliable defender of its interests. The great irony, of course, is that when Philippine soldiers attempt to seize the government by force, they do so with weapons made in the U.S.A. Their guns, ammunition, armored vehicles and airplanes are legacies of American “security assistance” to a succession of Philippine governments. During the martial-law years, 1972-1981, the Philippine military grew from a modest force of 50,000 to one five times as large.

This expansion was underwritten by the United States, in the interests of helping Marcos combat a communist insurgency. Although the Philippine army has proved remarkably ineffective as a counterinsurgent force, it has become quite adept at intervening in the affairs of civilian government. From the very outset of her presidency, Aquino has been a virtual prisoner of the soldiers sworn to protect and defend her. The longstanding deference of the armed forces to civilian authority was abandoned during the military expansion of the Marcos years; it will be extremely difficult for any Philippine president to restore. 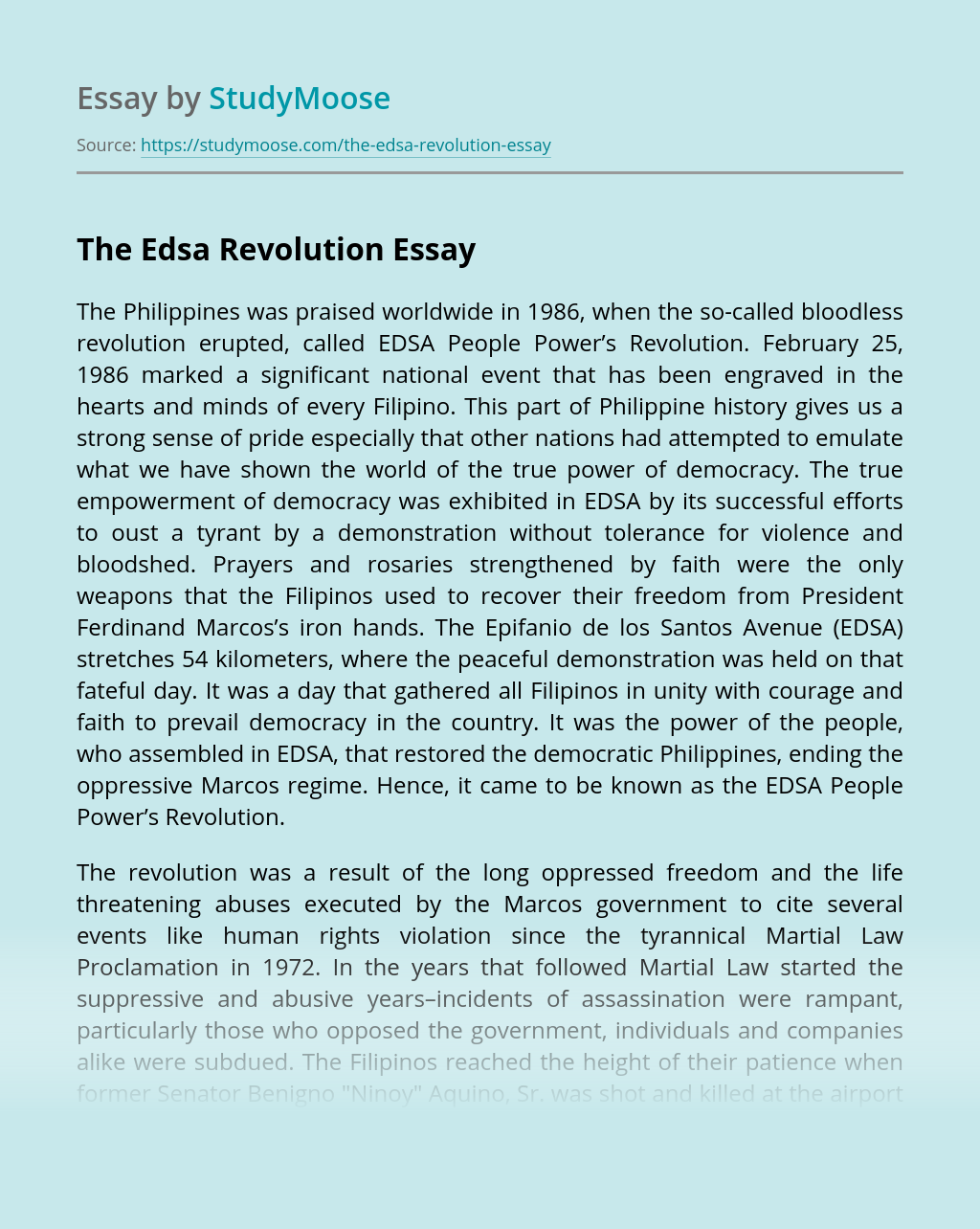