The Disasters of War

The Disasters of War (Spanish: Los Desastres de la Guerra) are a series of 82[a 1] prints created between 1810 and 1820 by the Spanish painter and printmaker Francisco Goya (1746–1828). Although Goya did not make known his intention when creating the plates, art historians view them as a visual protest against the violence of the 1808 Dos de Mayo Uprising, the subsequent Peninsular War of 1808–14 and the setbacks to the liberal cause following the restoration of the Bourbon monarchy in 1814.

During the conflicts between Napoleon’s French Empire and Spain, Goya retained his position as first court painter to the Spanish crown and continued to produce portraits of the Spanish and French rulers.

Don't use plagiarized sources. Get your custom essay on
“ The Disasters of War ”
Get custom paper
NEW! smart matching with writer

Although deeply affected by the war, he kept private his thoughts on the art he produced in response to the conflict and its aftermath. He was in poor health and almost deaf when, at 62, he began work on the prints. They were not published until 1863, 35 years after his death.

It is likely that only then was it considered politically safe to distribute a sequence of artworks criticising both the French and restored Bourbons.

In total over a thousand sets have been printed, though later ones are of lower quality, and most print room collections have at least some of the set. The name by which the series is known today is not Goya’s own. His handwritten title on an album of proofs given to a friend reads: Fatal consequences of Spain’s bloody war with Bonaparte, and other emphatic caprices (Spanish: Fatales consequencias de la sangrienta guerra en Espana con Buonaparte, Y otros caprichos enfaticos).

Aside from the titles or captions given to each print, these are Goya’s only known words on the series. With these works, he breaks from a number of painterly traditions. He rejects the bombastic heroics of most previous Spanish war art to show the effect of conflict on individuals. In addition he abandons colour in favour of a more direct truth he found in shadow and shade. The series was produced using a variety of intaglio printmaking techniques, mainly etching for the line work and aquatint for the tonal areas, but also engraving and drypoint.

As with many other Goya prints, they are sometimes referred to as aquatints, but more often as etchings. The series is usually considered in three groups which broadly mirror the order of their creation. The first 47 focus on incidents from the war and show the consequences of the conflict on individual soldiers and civilians. The middle series (plates 48 to 64) record the effects of the famine that hit Madrid in 1811–12, before the city was liberated from the French.

The final 17 reflect the bitter disappointment of liberals when the restored Bourbon monarchy, encouraged by the Catholic hierarchy, rejected the Spanish Constitution of 1812 and opposed both state and religious reform. Since their first publication, Goya’s scenes of atrocities, starvation, degradation and humiliation have been described as the “prodigious flowering of rage” as well as the “work of a memory that knew no forgiveness. “The serial nature in which the plates unfold has led some to see the images as similar in nature to photography.

The Disasters of War. (2016, Nov 13). Retrieved from http://studymoose.com/the-disasters-of-war-essay 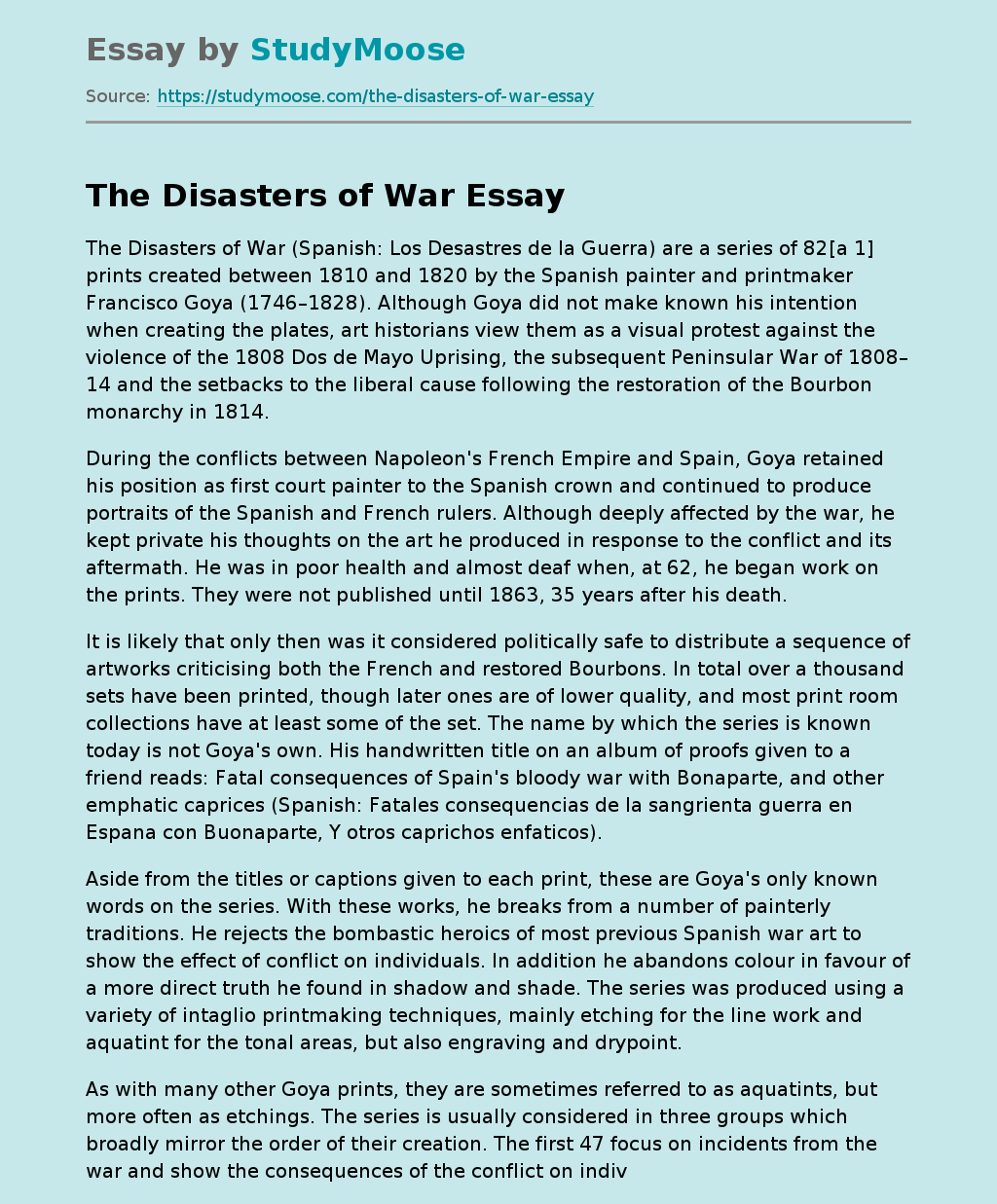