The Different Reasons Why F. Scott Fitzgerald's The Great Gatsby Is Considered a Classic

The Great Gatsby written by F. Scott Fitzgerald is a novel set in Long Island and New York City during the early 19020s, also called the Jazz Age. This was all taking place during the Prohibition era as well and the story is from the point of view of Nick Carraway. Nick is one of the main characters who was once Jay Gatsby’s neighbor and tells his story sometime after all the shenanigans happened, so this whole novel is actually a flashback.

Don't use plagiarized sources. Get your custom essay on
“ The Different Reasons Why F. Scott Fitzgerald’s The Great Gatsby Is Considered a Classic ”
Get custom paper
NEW! smart matching with writer

It truly is a great American novel that is still very popular today and there are many reasons why The Great Gatsby is a literary classic of the century.

One argument supporting the claim that The Great Gatsby is a great book is that it is still taught in many high schools today. It is normally taught in eleventh grade which is typically designated for American literature. According to a study done by the National Center on Literature Teaching and Learning, fifty-four percent of public schools, sixty-four percent of Catholic schools, and forty-nine percent of independent schools listed The Great Gatsby as a required text (Applebee, 28).

So many teachers use this novel in the classrooms because Fitzgerald uses a lot of literary devices. One of these major literary devices is symbolism. In the book, The Colombia History Of the American Novel, it says that “Fitzgerald achieves both Nick’s and the reader’s troubled repulsions in the world of Gatsby by producing spiritually resonating distortions and symbols that de familiarize the world and make it strange” (Norris, p.

326). Some of these symbols include the green light at the end of Daisy’s dock, a symbol of dreams that Jay Gatsby can never attain, and the Valley of Ashes, which symbolize the dumping ground of the rich, the immorality and death of wealthy society. Another literary device that is used in the novel are motifs which are literary terms that is are ideas, objects, or concepts that repeat themselves throughout a text. Some of the motifs are geography, with emphasis placed on where each character is from and where they end up, weather because it mirrors what is going on in the story, and colors especially with Daisy and the color white.

Another argument that backs the claim that The Great Gatsby is a classic novel is all the language that is used and interpreted throughout America. F. Scott Fitzgerald always loved to start sentences with one idea, person, or location then end up somewhere completely different which was exciting and new. An example of this is when he writes “If personality is an unbroken series of successful gestures, then there was something gorgeous about him, some heightened sensitivity to the promises of life, as if he were related to one of those intricate machines that register earthquakes ten thousand miles away” (Fitzgerald). He just has a good niche for taking ordinary American language and making is somewhat unearthly. There are also a lot of famous quotes from this novel that are still very well known today. One of these quotes is “…what foul dust floated in the wake of his dreams that temporarily closed out my interest in the abortive sorrows and short-winded elations of men” (Fitzgerald, Chapter 1). This quote uses a lot of descriptive words to make the reader use their senses. Another quote used is “I hope she’ll be a fool — that’s the best thing a girl can be in this world, a beautiful little fool … You see, I think everything’s terrible anyhow … And I know. I’ve been everywhere and seen everything and done everything” (Fitzgerald, Chapter 1).

This is when Daisy is talking to Nick about her daughter and portrays the way women were viewed and treated back then. Another quote that appeals to the reader’s senses is when they are talking about the Valley of Ashes “This is a valley of ashes — a fantastic farm where ashes grow like wheat into ridges and hills and grotesque gardens; where ashes take the forms of houses and chimneys and rising smoke and, finally, with a transcendent effort, of men who move dimly and already crumbling through the powdery air” (Fitzgerald, Chapter 2). Another quote very well known is “Everyone suspects himself of at least one of the cardinal virtues, and this is mine: I am one of the few honest people that I have ever known” (Fitzgerald, Chapter 3). One more excerpt that is very well known from The Great Gatsby is “Gatsby believed in the green light, the orgiastic future that year by year recedes before us. It eluded us then, but that’s no matter — tomorrow we will run faster, stretch out our arms farther .. .. And one fine morning — So we beat on, boats against the current, borne back ceaselessly into the past” (Fitzgerald, Chapter 9). This quote is probably the most famous one and it is just stating that really no matter what happens life goes on.

One more debate claiming that The Great Gatsby is an American literature masterpiece is that many of the themes of the novel can still be seen in societies today. During the “Roaring Twenties” the focus of the media was the rich and famous and it reflected the values of a clear majority of the United States. Materialism was a very big concept in the time of the book and still is a characteristic of modern societies. People were, and are, attracted to higher classes of living and everybody wants to be rich. Jay Gatsby’s character is defined by his clothing, cars, parties, and his extravagant house. Daisy too is portrayed with the thought of being wealthy, so much so that she doesn’t have any patience and marries Tom instead of waiting for Gatsby. This aspect of society has not changed much since The Great Gatsby was written. We still have an obsession with the most expensive and newest technology, music, cars, and clothes. Still today we see cases like Daisy’s where someone will marry a person for their money instead of marrying someone because they love them. Another concept at work is social networking. During the book Nick is introduced to many characters and learns their secret lives but never forms relationships with any of them. They only person that Nick actually gets close to is Gatsby. Today social networking has redefined the meaning of the word “friend” as someone you add on Facebook or follow on Twitter.

These relationships are shallower because they don’t allow you to know a person on a deeper level as you would if you knew the person in real life. Personas is another theme found in this book. If you don’t know Gatsby’s story, then he is an extremely famous and wealthy man who has come from money and lived the high life forever. In reality though Gatsby was actually born a poor farmer’s child and if the public actually knew he obtained his money through illegal operations then they would have a completely different perception of him. Gatsby is trying his best to create a fake persona in hopes of winning Daisy back. These faked personas are still used today and an amazing example is the TV show “Catfish.” In this show, people create fake dating profiles in order to attract other people. There are people who think that The Great Gatsby doesn’t deserve all the praise it gets and thinks it is just another novel.

One of these people is Kaythryn Schulz, writer for Vulture who says “I find Gatsby aesthetically overrated, psychologically vacant, and morally complacent; I think we kid ourselves about the lessons it contains. None of this would matter much to me if Gatsby were not also sacrosanct” (Schulz, Vulture). She also claims that the novel eludes to Fitzgerald’s personal life as well which she states is just sad. “When the novel was first published in 1925, Gatsby sold a disappointing twenty-one thousand copies, less than half of sales for This Side of Paradise and The Beautiful and Dammed” (Lucey). “In 1940, before dying of a massive heart attack in a Hollywood apartment at the age of 44, Fitzgerald earned a grand total of thirteen dollars and thirteen cents in royalties” (Lucey) from The Great Gatsby.

The Great Gatsby is considered a classic on so many accounts but some of the main reasons used in this essay are that it is still used in high schools today, it has exquisite language, and that many of the concepts and themes are still relevant to modern societies today. There are also reasons that people despise The Great Gatsby. I think forcing students to read this book in high school contributes to the negative reviews. The majority of students are too young at that age to appreciate the language and symbolisms put forth and resent having to read something they can’t understand. When read in later years, life experiences allow readers to better relate and understand the content. The Great Gatsby is no less than a masterpiece full of controversy about the 1920’s life style.

The Different Reasons Why F. Scott Fitzgerald's The Great Gatsby Is Considered a Classic. (2021, Sep 12). Retrieved from https://studymoose.com/the-different-reasons-why-f-scott-fitzgerald-s-the-great-gatsby-is-considered-a-classic-essay 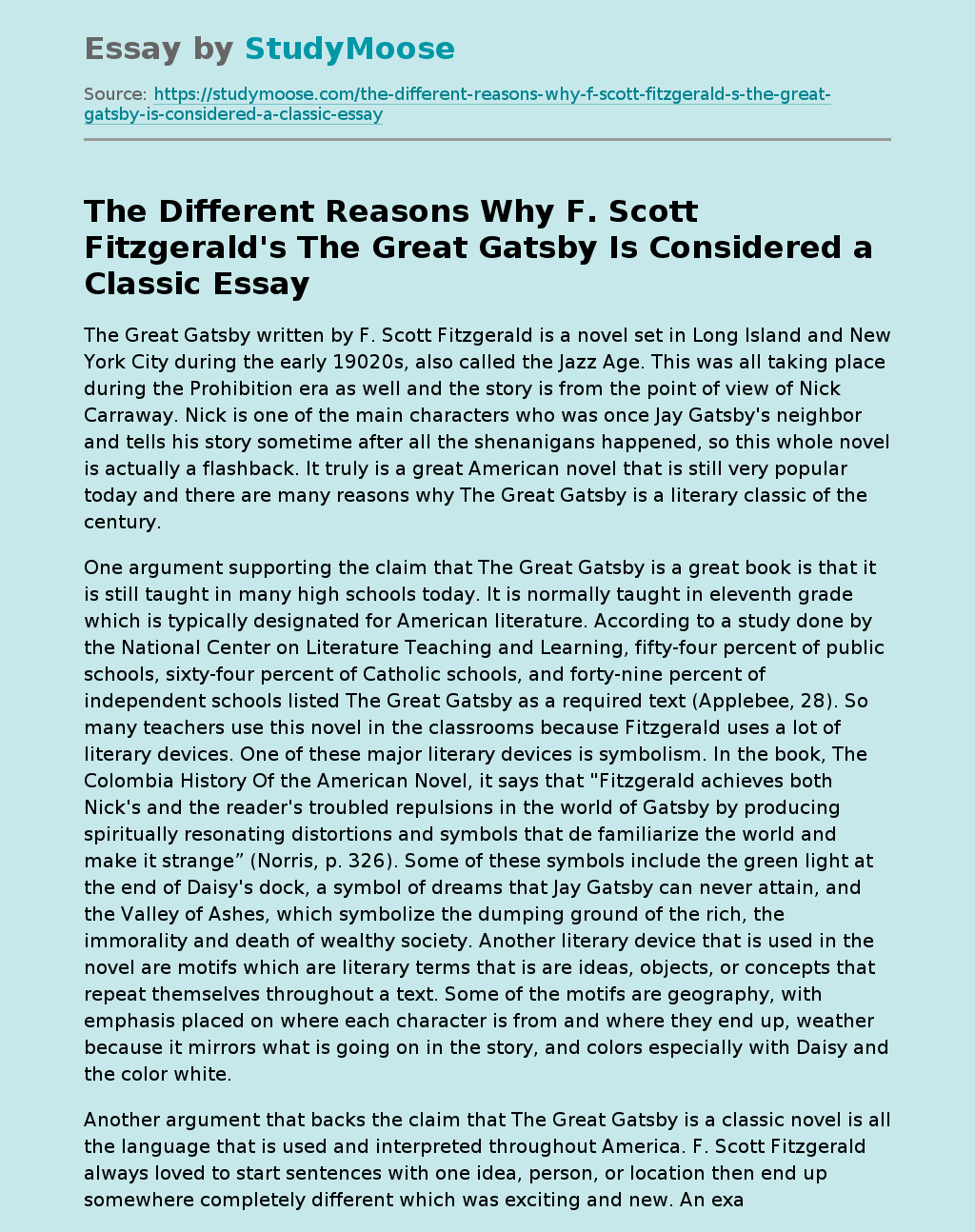