The Death Of My Grandfather

When a relative dies, there is no other feeling like this one. Whether it is an immediate relative or not, it still hurts. A question that pops into the human mind is, “Why did this happen to my relative?” or, “What could I have done to prevent this from happening?” Many times, as humans feel that there is an answer to everything, even when there is not.

Even before I was born, my grandfather loved me. It was so hard for my mother to conceive me that I was known as a miracle baby to not only my mom and dad, but my grandparents as well.

I was born two months early and stayed in the hospital for eleven weeks. After that, at the age of two, I caught pneumonia and was admitted back into the hospital for another long stay. My grandfather stayed at the hospital with me the entire time I was there. With my parents worrying, he was the support system of my family.

The need for my parents to work made it possible for my grandfather to take care of me during the day. As age crept upon me, he began to take me out of the house to experience life – to experience what being a child truly entailed. We went to the mall, the circus, the park, and of course, church. Church to me was a time where grown-ups got together to sing, cry, and in other words, act crazy. As I got even older, he began to teach me what church was really about.

I began to appreciate it more and gain a respect for it that I never used to have.

When it was time for me to go to school, I dreaded it, just as I used to dread going to church. This time was supposed to be a time of learning, but it ended up being a time of miserable isolation from the one’s I loved. Crying became an everyday routine with me as I was dropped off at school everyday. The words of my grandfather playing over and over in my head as I made the long journey down the school corridor reminded me of the times when I felt safe inside his haven of joy and happiness. The halls of the school reminded me of the empty spot in my heart the existed only when my grandfather could not be present to hold me close and tell me that my life without him would continue to exist, and bring me much pleasure and success. I could see his face in my mind. The thin mint flavored toothpick sticking out of his mouth. The beautiful chocolate-brown eyes that hid behind his brown-framed glasses that always had a sparkle in them even when he was angry.

Remembering his exceptionally white teeth that occasionally aided his mouth to indulge in a few chocolate covered raisins, or a couple honey-roasted peanuts put a smile on my face. His jet black hair that I used to comb through to put just a hint of grease in shining like polished onyx on top of a work of art encased in a museum. Thinking about his marvelous clothes that always seemed to match perfectly with his moods made me laugh a little as I entered my classroom to start another long day of learning that never seemed to interest me. When the time for recess grew near, my eyes began to glue to the window hoping to see my grandfather standing there to greet me as the bell started to ring in my ears. When the realization that he was not coming finally hit me, recess never tended to be as fun as I hoped it would be. The end of the day seemed to be so far away as my teacher rattled on about the way we were to write our cursive letters, or the way we were to set up our math problems on the board.

When would my day ever end? Why was I not able to go home to my grandfather and grandmother? Why did my teacher not see that home was where I truly needed to be? Again, the crying set in and the woman in the front of the room stopped teaching her lesson to ask me if I was all right. The first excuse that popped into my mind was always, “I am sick”, or “I think I am going to throw up.” These two short yet meaningful phrases without fail sent me to the nurse to make up another lie as to why I needed to go home. The nurse would call my mom who would rush to school to pick me up.

The lies flowed out of my mouth like a waterfall over a cliff. Her only option was to take me over my grandparents’ house where my grandfather would take my temperature, give me some Tylenol, and lean back in his chair where I would lay on his stomach and fall asleep for an hour or two. When I would wake up, he would run to the bathroom. With me not being fully coherent, I would get scared and run to my grandmother who would then tell me that he had laid back in the chair the whole time I was sleep, having to use the bathroom. He did not want to get up because he did not want to wake me. Even then, I knew that he had always put me before his self, and that was one of the most important things I would come to remember about him after he was gone.

We spent much of our time together sitting outside watching the people go down the street, while he told me stories about my mom and how similar we were. I loved watching him speak because his words flowed so gracefully as if he had practiced and memorized them for weeks before that day. My grandmother would bring us some lemonade, or a piece of freshly fried chicken and tell us that it was getting dark and we needed to come inside. He would grab my banana seat bike and wheel it into the garage as I gathered my hula-hoop and jump rope following him into the garage. Inside as we would get ready for bed, he would make me a cup of warm milk flavored with just a hint of orange to taste. My grandmother would tuck me in as my grandfather bent over to give me a goodnight kiss right in the middle of my forehead.

Around the neighborhood, my grandfather was known as a man who took pride in his house, and wanted it to look nice and neat for as long as possible. The outside of his house was just as neat as the inside. One day while walking to the garage, he noticed that some paint was starting to come off. Immediately he went to the store to buy a can of spray paint to touch it up just a little bit, and restore it to its original beauty. He spayed the paint evenly on and around the area on the garage and everything seemed to be normal. A couple of days later my grandmother called my house telling my mother that my grandfather was having a little difficulty breathing, and that she did not know what was wrong with him. As soon as my mom hung up the phone, we immediately went over to their house. My grandfather was lying in the bed breathing deep as if he smelled an unusual odor. I gave him a hug starting to cry because I did not know what was wrong with him.

After a few days, we took him to the hospital. It turned out that he had inhaled the fumes from the paint and his body was starting to shut down. The first things to shut down were his kidneys. After his kidney function restored, his ulcers began to get bigger and cause him pain. He had surgery on his stomach, and then his lungs began to collapse. What more could go wrong? As all of this was happening, I started to realize that there was nothing that I could do to help him. His body began to swell as the medication from his I.V.’s began to build up in his body.

The terror that ran through my body was like no other. While at home one day, the phone rang. It was one of my grandfather’s nurses telling my family to come to the hospital right away. I will always remember the voice in the background that said, “He’s gone!” When getting ready to go to the hospital my mother told me that I could not go with them. Anger shot through my bones before she could even finish her statement. I begged and pleaded for her to let me come along, but there was no convincing her.

My “daddy” died that day along with a part of my heart and spirit that cannot be replaced. The memories of my grandfather holding me tight in his arms, kissing my forehead, telling me that he loved me will forever be in my mind as I think of his beautiful white teeth.

The Death Of My Grandfather. (2016, Jul 15). Retrieved from http://studymoose.com/the-death-of-my-grandfather-essay 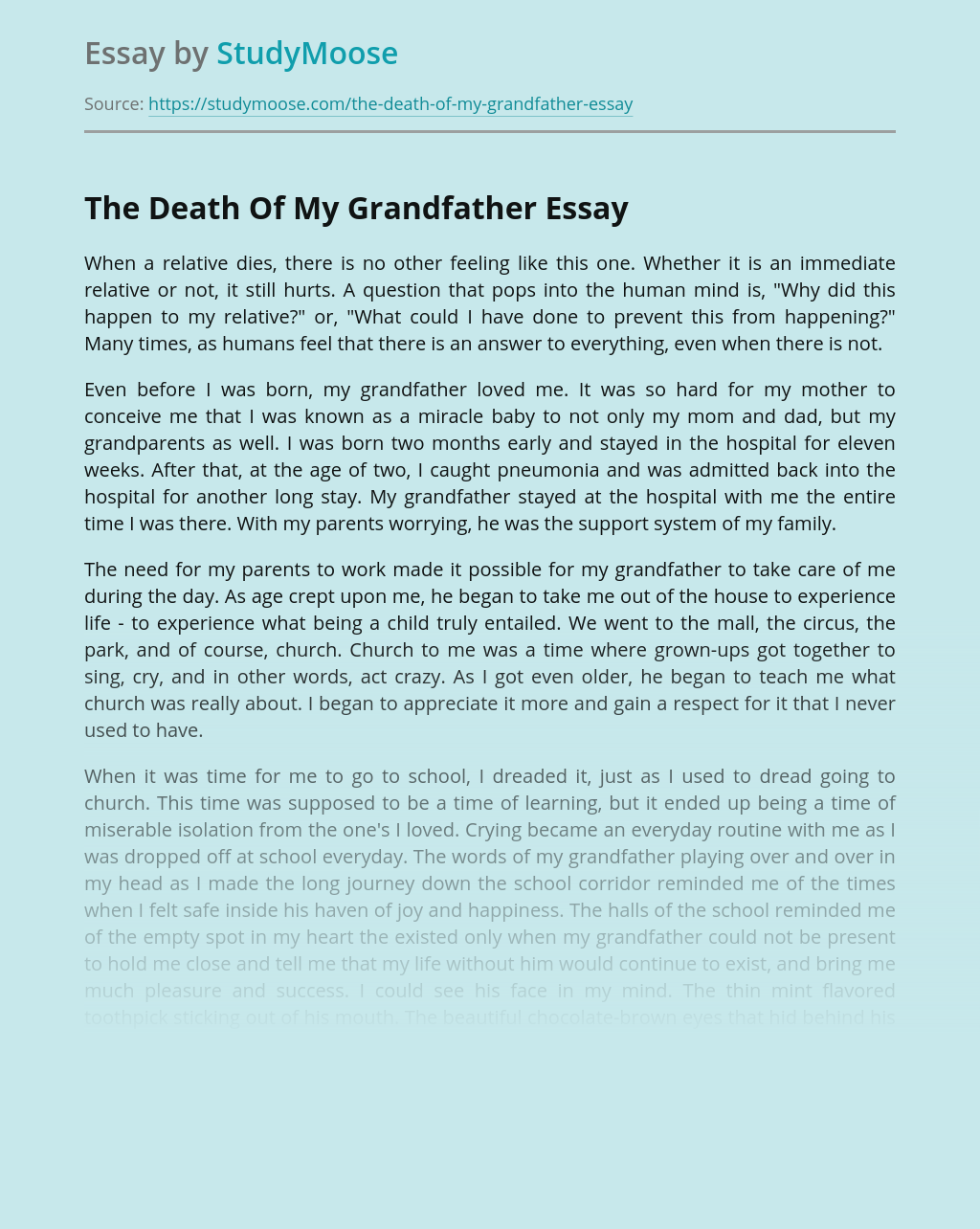 Don’t waste time
Get a verified writer to help you with The Death Of My Grandfather
Hire verified writer
$35.80 for a 2-page paper
Stay Safe, Stay Original