The Damned Human Race by Mark Twain is an essay that explains his harsh views on humanity by comparing and contrasting the world’s actions to those of animals. The essay is successful in the sense that it influences the reader to feel the feelings that the author, Mark Twain is also feeling. He is able to get the reader to gather the emotions he is portraying through his metaphors. Mark Twain’s essay uses many metaphors relating us to animals.

Don't use plagiarized sources. Get your custom essay on
“ The Damned Human Race ”
Get custom paper
NEW! smart matching with writer

The use of these metaphors is a good way for the audience to truly gain an understanding of why Mark Twain feels that mankind has become so evil and heartless. Mark Twain states “Roosters keep harems, but it is by consent of their concu­bines; therefore no wrong is done. Men keep harems but it is by brute force, privileged by atrocious laws which the other sex were allowed no hand in making. In this matter man occupies a far lower place than the rooster.

”(Twain, Mark 3) This is a good example of Mark Twain using animals to explain the depletion of humanity.

Mark Twain uses a different style of writing than what he is most famous for. He is famous for fictional stories specifically written into long length books. However, it would peek one’s interest to know that he also writes essays. They may not be up to MLA standards but how could they be if this was so far back in time when the essay was written.

Mark Twain uses a pathos style of persuasion. Pathos being an emotional appeal. He is persuading the audience to feel the emotions he is feeling towards such disgrace at mankind.

He is drawing pity from the audience as well as inspiring anger within them to possibly promote action to change the evil ways of our people. He chooses empathy from his writing. Mark Twain writes on his beliefs and not on scientific evidence. His beliefs are quite crass and bias. However the use of his words is not meant to prove any theory to be true. He is simply explaining his feelings on how man is not only animalistic but of a lower species of animal. He does explain that some animals are of good nature and that some animals are not. 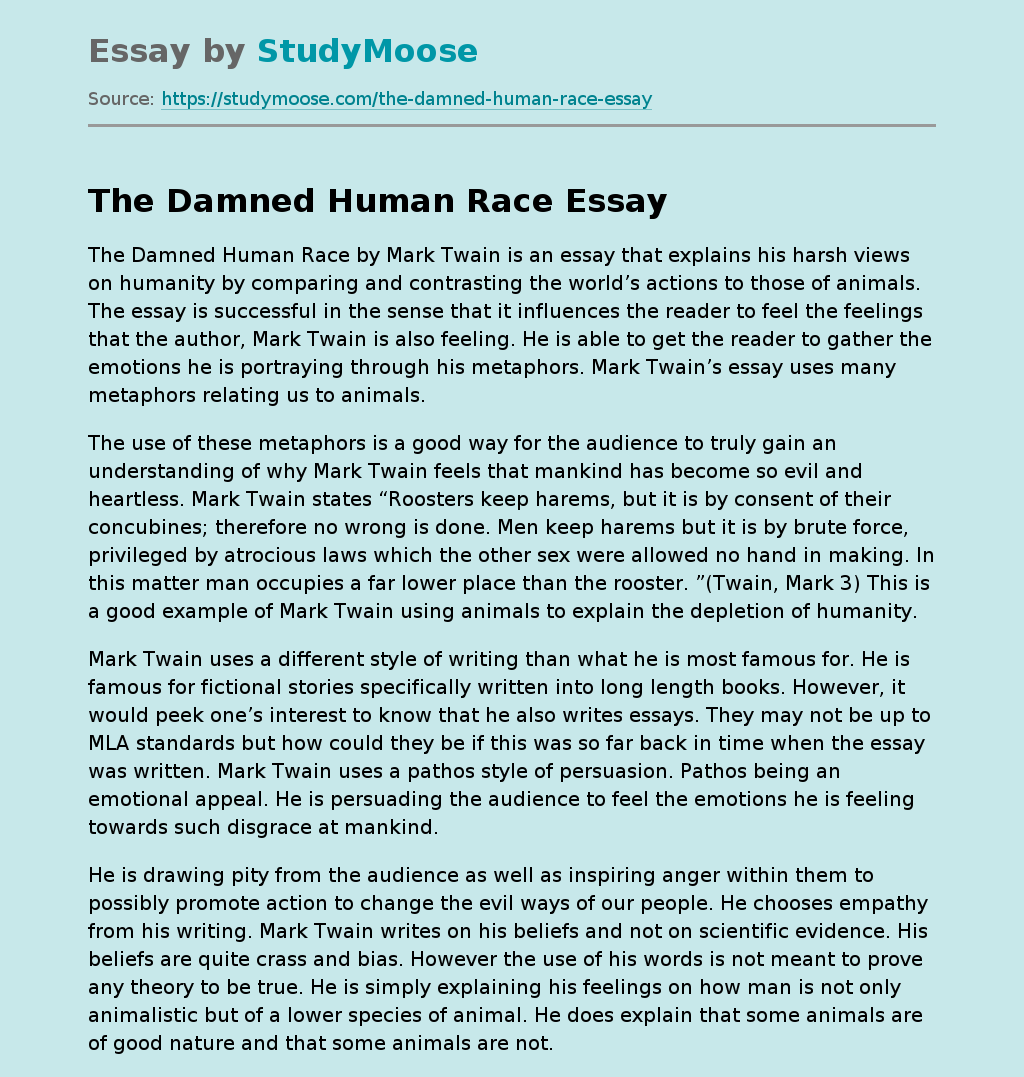