The Olinka do not believe girls should be educated. When I asked a mother why she thought this she said: “A girl is nothing to herself; only to her husband can she become something. ” “What can she become? ” I asked. “Why,” she said, “the mother of his children. ” (162) Much like many women in the United States in the early 20th century, women in the Olinka tribe were uneducated. Many were illiterate. These African women, like American women were dominated by the male presence in their tribe.

Don't use plagiarized sources. Get your custom essay on
“ Olinka Tribe ”
Get custom paper
NEW! smart matching with writer

They were limited to the set roles they were required to play, consisting mainly of serving the husband and mothering his children. Slavery, before it became abolished, had many similarities between itself and women’s oppression, particularly in The Color Purple. In the South during slavery, the law prohibited slaves to hold property, leave their masters’ premises without permission, to be out after dark, to congregate with other slaves except when going to church, to carry firearms, or to strike a white person even in self-defense (Brinkley 382).

Many husbands controlled their wives in this way as well. They forced women to serve them and had the ability to harshly punish if they did not obey. These slave codes in the South also forbade whites from teaching slaves to read and write as well as to testify against whites in court (Brinkley 382). Women all throughout the country were not able to read and write, nor were the women in Africa as well.

Education was generally reserved for the men, leaving women illiterate just as the slaves were illiterate.

Masters who enforced the slave codes could decide whether or not they wanted to rule by them as well. This created an atmosphere where slave treatment and punishment came in wide varieties (Brinkley 382). This atmosphere left the door open for harsh beatings and sometimes even killings that were not considered illegal. Many times in The Color Purple, Albert beats Celie when she will not do what he wants or even if she does nothing at all. Harpo also tries to beat Sophie as his father, Albert, instilled the practice of violent command in him when he was just boy.

On the contrary, masters could also be lenient with the slave code enforcement. Slaves were sometimes able to acquire property, learn to read and write, and assemble with other slaves (Brinkley 382). Although this was the extreme, women were also able to escape the limitations posed by some men. Nettie became a very educated woman and Sophia refused to be beaten or take orders from Harpo, her husband, therefore defying the natural way of life for women at the time. Slaves also existed in a paternalistic relationship with their masters much like the relationship between women and their husbands.

Slaves also lived in nuclear families as well, the type of family with the father as the head or the leader (Brinkley 394). Like slavery, the father was the head of the family in the women’s case as well. House servants were generally closer to the master. This closeness with the family invited more punshments and closer relationships to develop than slaves that labored in the fields. These domestic servants performed jobs such as nursemaids, housemaids, cooks, butlers, and coachmen (Brinkley 386).

Slaves that worked in close proximity of the master were more opportune to the master’s keen eye and the mistakes that they made were more easily discovered. The wives of controlling husbands were much like these slaves that were house servants in the fact that they worked closer to their husband and as a result, their mistakes were more easily spotted. Normally, slaves lived in cramped cabins, called slave quarters, usually clustered together in a complex near the master’s house. Their diets consisted of cornmeal, salt pork, molasses and rarely fresh meat or poultry.

Many times, masters gave slaves their own gardens to make their own food (Brinkley 383, 386). However, some slaves did eat well. Lucinda Davis, a slave of a Creek Indian, remembers eating green corn, pork, deer meat, wild turkey, fish, and lots of other green vegetables that she grew on their farm (Rawick 56). Ordinarily, slaves did not eat well and lived in poor conditions most of the time. They were limited by their opportunities much like women. The times were much tougher for enslaved black women than men.

Enslaved women usually labored in the field with the men and also performed the roles designated for women such as cooking, cleaning, and child rearing. Women many times also acted as single parents supporting yet more burdens because of the separation of slave families (Brinkley 386). Celie did almost everyone of these activities in The Color Purple. Although she was not a single mother, she labored in the field while most of the time Albert watched. She also cooked, cleaned, and raised children. Enslaved women also suffered more burdens.

They were particularly vulnerable to sexual abuse from their masters and on many different occasions were forced into sexual relationships and even raped (Brinkley 387). These women often had children at very early ages as a result. They could become pregnant at even the ages of fourteen and fifteen and on top of this, premarital pregnancy was not condemned in black society (Brinkley 394). Pa, Celie’s step-father, rapes Celie in the first few pages of the book when she is only fourteen and again about a year later giving her two children at very early ages just as the enslaved women were sexually treated.

Her husband, Albert, also rapes Celie because she never wants a sexual relationship with him but is forced into it. Women did not have the power to stop a man from sexual assault physically nor with help from the society. The gender roles played by Celie, the women in the Olinka tribe, and women all throughout America act as a parallel with Slavery. These roles coincide with the treatment of slaves and even seem to have developed as a result of slavery.

In some cases, women’s oppression seems to be a milder view of slavery; in others, it seems just as bad. Many women, such as Susan B. Anthony and Elizabeth Cady Stanton supported both the Women’s Rights Movement and the Abolitionists’ Movement because they reasoned that by pointing out the similarities between the two hardships, they could enhance their position by helping the black’s position. In The Color Purple by Alice Walker, Celie’s dominating husband, compared to the dominating white master in a slave’s case, treats Celie like a slave.

Celie does what Albert, her husband, tells her to do, she is often beaten, and is also raped. This treatment very closely resembles that of slaves. Women in Africa perform the same tasks and are set apart as hostesses for their husbands, to work and raise their children. This also resembles slavery. These two great instances of subordination in our world show many similarities within each other; however, it was many more years later that women gained their deserved rights as equals from the time slavery was abolished. 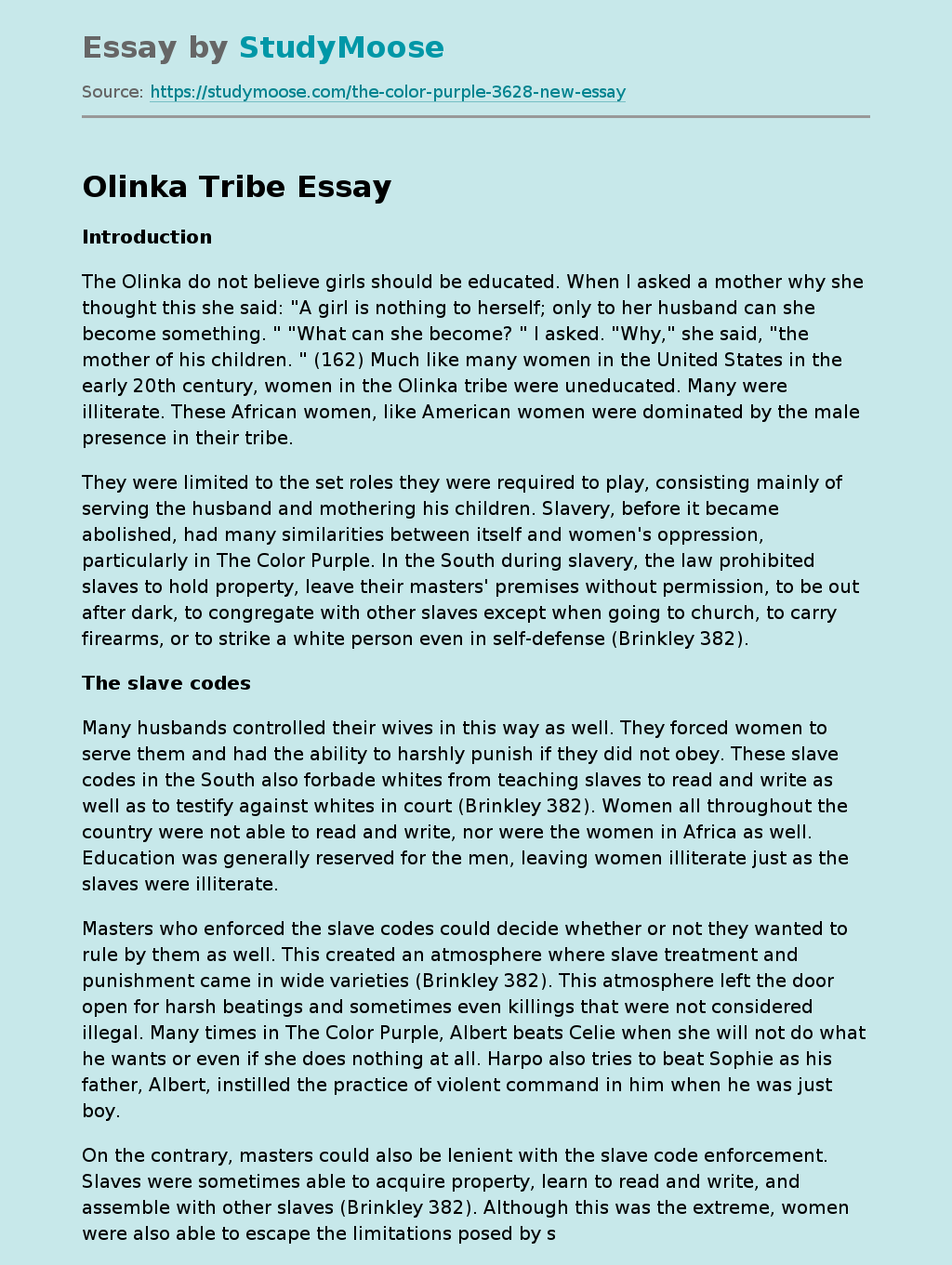