The Christian Church was born out of the legacies of the Greek, Roman and Jewish cultures. Through God’s providence and perhaps advantageous timing, the Christian Church entered a world prepared for the truth of God. The Greeks provided a universal language and philosophy that supported the acceptance of the Church.

Turn in your highest-quality paper
Get a qualified writer to help you with
“ The Christian Church ”
Get high-quality paper
NEW! AI matching with writer

Roman laws, organization, and commitment to peace created proper surroundings for the Church to flourish. Lastly, the Jewish religious principles, helped form the backbone of the Christian Church.

Through a detailed examination of the language and philosophy, organization and structure, and religions views of the early Christian Church we can determine that the Greek, Roman, and Jewish Cultures all contributed to the birth and spread of the Church.

The Hellenistic culture of the ancient Greeks contributed its philosophy and language to the Christian Church. Alexander the Great built an empire united by a common thread: Greek ideology, language and culture. This process of assimilation by which Greek culture was transplanted to the east became identified as Hellenization.

The popular Greek language became a medium on which the Christian religion could flourish, as the language created a disposition of acceptance. The Greek language was the contemporary language associated with a well-established culture.

Though the Greek religion was considered one-dimensional and simple, its language allowed the Jewish and other eastern religions, which would eventually contribute to Christianity, to communicate properly. The dominant Greek philosophical ideals of the time, which where Stoicism, Platonism and Epicureanism, all contributed greatly to the evolution of the Christian Church. One early Christian by the name of Clement of Alexandria wrote:

Philosophy has been given to the Greeks as their own kind of Covenant, their foundation for the philosophy of Christ … the philosophy of the Greeks … contains the basic elements of that genuine and perfect knowledge which is higher than human … even upon those spiritual objects. (Miscellanies 6. 8)

Clements’ statement demonstrates how important Greek philosophy was to the Christian religion. Great philosophers such as Aristotle and Plato added important concepts and teachings to the Christian faith. The Greek culture was instrumental in providing a well-known and respected language for the Christian Church, as well as many significant philosophies, which contributed to the birth and spread of the Church. The Roman Empire provided efficient structure and organization, which catalyzed the growth of the Christian community. In the year 509 B.C. after multiple monarchs had failed to satisfy the Roman society, the Republic of Rome was founded. The republic divided the power of Rome among a group of Assemblies, two consuls and the Senate. The Republic government flourished for 376 years, but in 133 B.C. it collapsed to civil war.

After years of fighting, betrayal and violence, a powerful authority named Augustus founded the Roman Empire. Augustus brought peace and prosperity to the Roman world. This great time for the Roman Empire was called the Pax Romana, a revolutionary era where the Christian religion gained the ability to expand its administration. During the times of the Pax Romana, travel across large distances became very efficient and safe for new public highways were introduced throughout the Roman Empire. Such highways made the spread of the Christian Church much easier than before. Suddenly, messages and people could travel vast lengths very quick.

Direct highways in the Roman Empire enabled Christians to unite, communicate and gain power and information. Rome also served as a protected area for early Christians to live and worship God. The Empire’s structure and law under the reign of Augustus supported the importance moral conduct and justice, key concepts that would eventually become part of the Church’s purpose. The Roman structure and law was influenced by the dominant Stoic philosophy. Stoics believed that the highest good that man can achieve is to live a life of virtue in harmony with reason. This Stoic belief would ultimately aid in the Christian understanding of the Natural Law. It is true to establish that the Roman Empire’s structure, law and organization greatly helped facilitate the birth and spread of the Christian Faith.

The Jewish culture formed the religious foundation of the Christian Church. The Jewish people were the chosen people of God, the true descendants of Abraham. The early Christians were originally members of the Jewish faith. Many of the Jewish principles of religion continue to exist in Christianity, such as their firm monotheistic belief. Perhaps the most important Jewish relation that helped initialize the Christian Church is the life of the Messiah Jesus. The word Christian did not exist until 40 years after the crucifixion, Jesus was born and died a Jew. The origins of Christianity evolved from the heart of Jewish culture. Jesus challenged the customs of the day by teaching revolutionary interpretations of Jewish scripture.

Although they did not call themselves Christians yet, Jesus’ followers founded the beginning of the Church. Jesus used modified and logically understood Jewish scriptures to inform the people of God that salvation was at hand. The entire Old Testament originates from the Jewish written Tanakh. Much of our Christian models such as heaven and hell, angels and devils, and respect and love for human life come from Jewish tradition. Through Jewish religious conception and Jesus’s role in empowering and teaching early Christians, it is true to conclude that the Jewish faith directly aided Christianity to commence and develop.

A clearer understanding of the Roman, Greek, and Jewish contributions to the Christian Church allows us to identify the significant impact such cultures have had on the Church. An analysis of the language and philosophy, organization and structure, and religions views of the early Christian Church enables us to conclude that the Greek, Roman, and Jewish Cultures all contributed to the birth and spread of the Church.

The Christian Church. (2016, May 06). Retrieved from https://studymoose.com/the-christian-church-essay 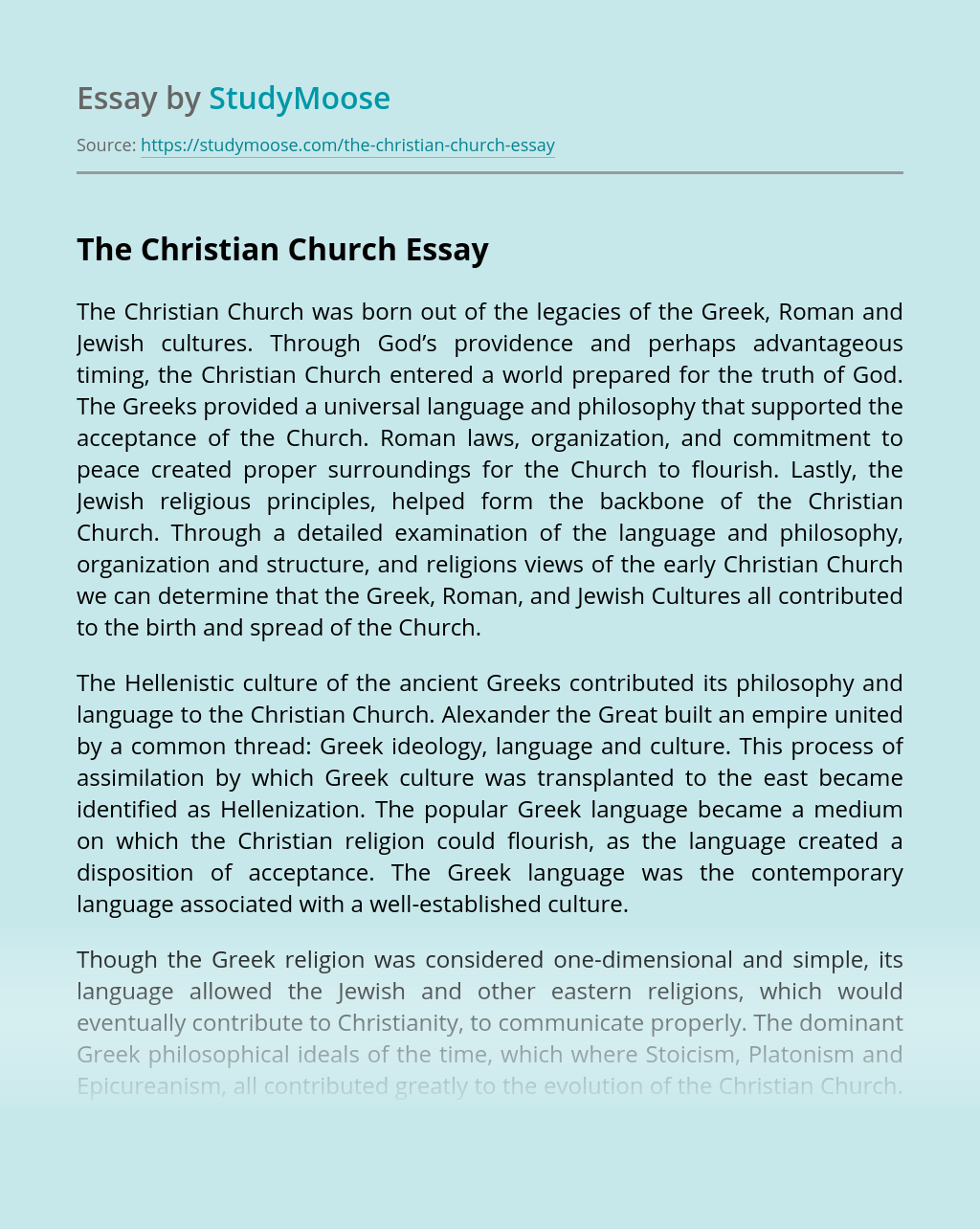 Turn in your highest-quality paper
Get a qualified writer to help you with
“ The Christian Church ”
Get high-quality paper
Helping students since 2015
Stay Safe, Stay Original