The Causes and Effects of the Homestead Strike

The Homestead Strike was a very violent, but important event to the people of the American Business Industry. The violent act of a desperate businessman, in attempt to retain peace, killed many men. The infamous story of the Pinkertons changed the ways of American business agreements. The Homestead Strike changed the traditional American business environment by creating new laws and the awareness of the need for peace in business world.

The Carnegie Steel Company was a successful factory, which employed many hundred of workers.

Turn in your highest-quality paper
Get a qualified writer to help you with
“ The Causes and Effects of the Homestead Strike ”
Get high-quality paper
NEW! AI matching with writer

Andrew Carnegie, who was the owner of the company, wanted a large successful business, which he had achieved already, but he was always looking for ways to save and make more money. By 1892, unions had been formed (Gardner p. 70). The Amalgamated Association of Iron and Steel Workers, founded in 1876, it quickly became the largest union with some 24,000 workers (Ciment p. 33). The union prevented Andrew Carnegie from lowering cost and wages.

By 1900, Carnegie’s steel was cheap. Suddenly bridges and skyscrapers were not only possible but also affordable.

They fought over working conditions. One of the worst working conditions of the Carnegie Steel Company was the fact that they paid absolutely no hazard pay. Approximately 300 men were killed and another 2,000 were injured while working there. The Carnegie Steel Company offered no reimbursement whatsoever to the families of the men killed or to the injured men themselves (Gardner p. 65). The Amalgamated members at Homestead also “badgered the company into acceding to most of its demands.” (Gardner p. 65)

The union and the rest of the workers contracts’ were set to expire on June 30, 1892. In 1889, workers had won a strike and negotiated a three-year contract for fluctuating scale depending on profit (Goldner p. 1). Andrew Carnegie left Henry Clay Frick in charge of battling the contract dispute. Henry Clay Frick was known for his anti-union policy. The two sides disputing the contract agreement continued to have meetings and could not reach an agreement. The workers tried to hang Frick and superintendent J.A. Potter on mill property to express their disgruntlement (Goldner p. 1). The workers were extremely irritated and felt that the company was not reasonable, practical, or rational.

The union and non-union workers tried hard together under the management of Hugh O’Donnell, an active member of the Amalgamated Association of Iron and Steel Workers, to reach an agreement. Three more conferences between the two sides took place between March and June. “Frick then announced that he would no longer work the Amalgamated and that work would commence as usual on July 6th, without recognition of the Union (Goldner p. 1). This angered the workers and in a meeting, 3,800 workers voted to strike (Goldner p. 1). This was a surprisingly larger amount of strikers then the company was prepared for.

Frick contracted with William and Robert Pinkerton for a fortified force of three hundred men, otherwise known as “Pinkertons”. The Pinkerton’s were expected to arrive on July 6th to help control the strikers. During the last week of June, Frick laid off many workers, which angered the union and other workers even more. Henry’s intent of the Pinkertons was to take over the mill (Gardner p. 66). The Pinkertons brought over 200 crates full of Winchester Rifles. On June 29, despite the union’s willingness to negotiate, Frick closed the mill and locked out 3,800 men. “Two days later, workers seized the mill and sealed off the town from strikebreakers. Frick called in a private police force, the Pinkerton Detective Agency, to protect the non-union workers he planned to hire”(American Heritage p. 14). The workers had become so angered that it was an endangerment to the non-union workers that Frick had hired, and they needed a way of protection.

The workers fired warning shots and they shouted for the Pinkertons to go back, or they’ll not answer for their lives. When the first Pinkerton walked into Homestead, a worker shot him in the thigh (American Heritage p. 17). ” When the Pinkertons marched from the barges to the rink, they were shamefully abused”(Illustrated American p. 2). A Homestead Mob burned the barges all the way down to the water line. Hugh O’ Donnell made no attempt to stop the violence after many Pinkertons and eight workers were dead. The town begged for news of the workers and their conditions. Hugh O’ Donnell insisted to let the Pinkertons surrender safely if they left Homestead.

The American business ways were changed by this event due to the terrible violence that occurred. Governor Pattison ordered the state militia to Homestead on July 11. With the militia’s protection, strikebreakers entered the mill. For many weeks, the company was totally idle. Despite the immense violence, they workers did not receive their wanted pay. In mid-November, the union conceded. Three hundred locked-out men applied for work and were rehired. Many more were blacklisted. “Life worth living again!” Carnegie cabled Frick. “First happy morning since July.” With the union crushed, Carnegie greatly decreased wages, imposed twelve-hour workdays, and eliminated 500 jobs (Gardner p. 77).

A total of 8,000 men were sent after the Pinkerton’s to Homestead (Ciment p. 1). “The National Guardsmen of Pennsylvania evicted workers from company homes, arrested individuals repeatedly just to charge them bail, and involved the workers in a series of costly court cases” (Goldner p. 1). Anti-Pinkerton laws were formed throughout the state (Gardner p. 78). The purpose of these laws were to prevent the horrible violence from ever happening again.

Although the Amalgamated Association of Iron and Steel Workers lost the “battle” in the Homestead Strike, they opened up many new opportunities for labor-management, which changed the American business ways. Many more Unions were formed such as in 1896 the Amalgamated Meat Cutters & Butcher Workmen Union was founded. Also, in 1900 the International Ladies Garment Workers Union founded, and in 1901 the United Textile Workers of America was founded. Finally in 1913, The United States Department of Labor was established; the Clayton Act was passed by Congress, legalizing and protecting picketing and other certain union activity. The purpose of the United States Department of Labor is stated in its mission statement.

“The Department of Labor fosters and promotes the welfare of the job seekers, wage earners, and retirees of the United States by improving their working conditions, advancing their opportunities for profitable employment, protecting their retirement and health care benefits, helping employers find workers, strengthening free collective bargaining, and tracking changes in employment, prices, and other national economic measurements. In carrying out this mission, the Department administers a variety of Federal labor laws including those that guarantee workers’ rights to safe and healthful working conditions; a minimum hourly wage and overtime pay; freedom from employment discrimination; unemployment insurance; and other income support ” (Mission Statement of the United States Department of Labor p. 1). This provided ways of refuge for company workers and owners to communicate better.

The Homestead strike effected things socially, economically, and culturally in many ways. The Homestead strike killed many men in which greatly affected Homestead socially. The Homestead strike left many people jobless and in the need of money, this affected Homestead both culturally and socially. It changed the culture because Homestead used to be filled with employed men and their families, but now many men were left penniless. The economy was affected when the company profits soared reaching $40,000,000 net in the year 1900, as against $4,300,000 around the same time in 1892. It also affected the working world of the Carnegie Steel Company. Carnegie would came back to Homestead six years later to dedicate a building that would house a library, a concert hall, a swimming pool, bowling alleys, and a gymnasium.

The Causes and Effects of the Homestead Strike. (2016, Jul 01). Retrieved from https://studymoose.com/the-causes-and-effects-of-the-homestead-strike-essay 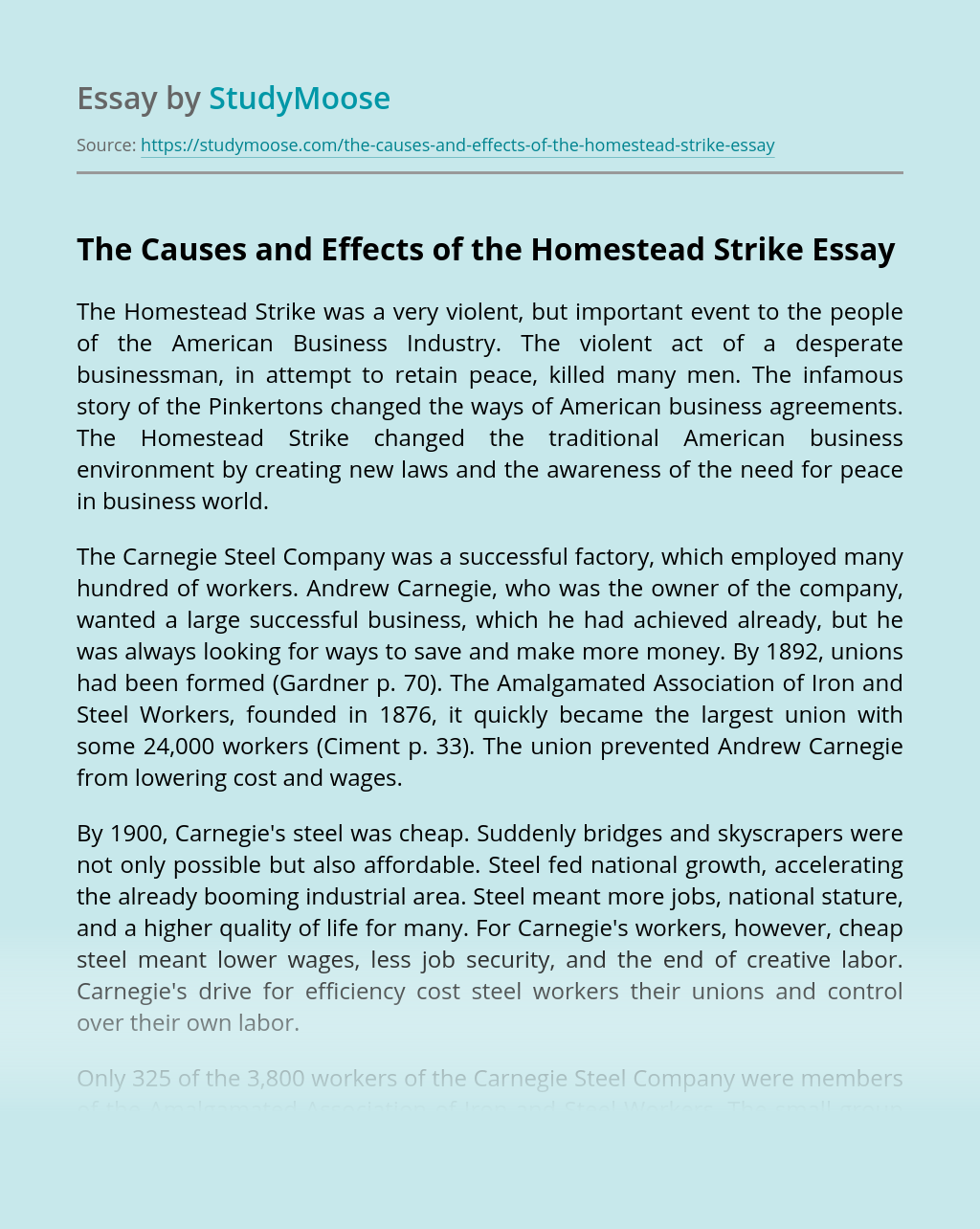 Turn in your highest-quality paper
Get a qualified writer to help you with
“ The Causes and Effects of the Homestead Strike ”
Get high-quality paper
Helping students since 2015
Stay Safe, Stay Original