The Book Thief by Markus Zusak: Role of Death Character

In the novel The Book Thief by Markus Zusak, the narrator who is known only as ‘Death’ is a critical thinker which makes Death’s point of view very engaging for an audience. Death tells the story of Liesel, a German girl living in Germany during World War Two. Death’s point of view is engaging for an audience because he provides his own insights and observations about humanity.

Through his insightful narration, Death conveys to us Zusak’s idea of the duality of humanity.

Don't use plagiarized sources. Get your custom essay on
“ The Book Thief by Markus Zusak: Role of Death Character ”
Get custom paper
NEW! smart matching with writer

One of the main ideas within this idea is that of the beauty in ugliness.

This idea is best shown to us through Liesel’s best friend, a young man named Rudy Steiner. Rudy is the perfect physical example of a Nazi; he has “beautiful blond hair and big safe blue eyes” and he is a fine athlete. However, mentally he hasn’t got a Nazi moral in him. Zusak tells us this through Rudy’s actions.

When the Jews are being paraded through Molching (where Rudy and Liesel live) to the death camp, Dachau, Rudy puts bread on the road for the Jews to eat, even though this is very dangerous and he is starving himself. This small act of kindness is a beautiful act in the ugly world of Nazi Germany. Death foreshadows Rudy’s untimely demise by saying “he didn’t deserve to die the way he did.” Zusak is using Death as a narrator to make insightful judgements of human’s character through their actions to portray the idea of beauty in ugliness.

The triumph of love over hate is another part of the duality of humanity which Zusak uses Death to show. This idea is best portrayed to us through the relationship of Liesel and Max, a Jew who Liesel’s foster parents, the Hubermans, take in and hide in their basement during the Holocaust. In Nazi Germany at the time, their relationship is very much illegal due to the antisemitic laws and views of Nazism. However, it is this hate and oppression which brings them together and helps to develop the love between them. Zusak uses two events to really show us the strength of their love. The first is when Max is being marched through the main street of Molching on his way to Dachau after being caught. Liesel spots him in the crowd, and despite the danger of even waving to him, she runs out and hugs him.

“Her feet heavier than they had ever been before, heart swelling in her chest, she stepped onto the road.” Zusak uses this act to show that sometimes the pull of love is far stronger than the fear of any punishment. The second event is when after the war, Liesel is working in a shop and a man comes in looking for her. She comes out and sees Max and in the words of Death “They both fell to the floor, and hugged and cried.” Through the narration of Death, Zusak shows us that Max somehow managed to survive Dachau. Zusak is suggesting that the power of Liesel’s love was enough to overcome the hate of Nazism and gave Max the strength to survive.

In conclusion, the narrator must be a critical thinker if the point of view of the text is to be engaging for a modern audience. Death as a narrator is a critical thinker who Zusak uses to portray the idea of the duality of humanity and to show us a part of the war which is rarely presented to us. 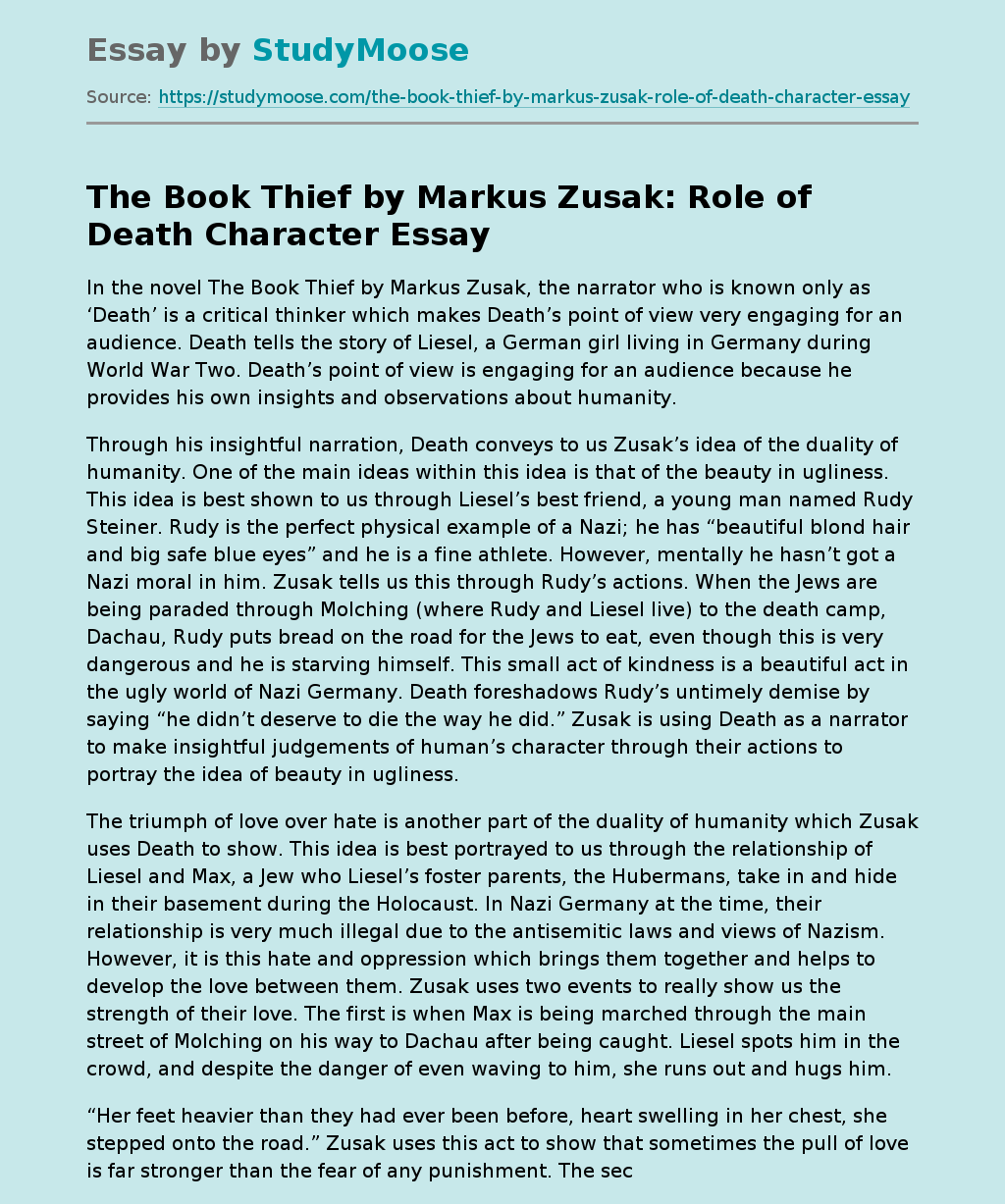