The Benefits of Study Abroad

“It will change your life. You’ll come back a new person.” For years, the benefits of study abroad have been described in these words. Everyone in the study abroad field believed it could greatly impact a student’s life, but the exact long-term benefits were unknown – until now.

The first large-scale survey to explore the long-term impact of study abroad on a student’s personal, professional, and academic life shows that study abroad positively and unequivocally influences the career path, world-view, and self-confidence of students.

The Institute for the International Education of Students (IES) surveyed alumni from all IES study abroad programs from 1950 to 1999. Regardless of where students studied and for how long, the data from the more than 3,400 respondents (a 23 percent response rate) shows that studying abroad is usually a defining moment in a young person’s life and continues to impact the participant’s life for years after the experience.

“Overall, I learned a lot more about myself in that one semester than I did in the three and a half years in my home school because of the unique space in which I learned, experienced, and spent exploring another culture,” says Carolyn Valtos (IES Adelaide, 1992).

An overwhelming majority of respondents echoed Valtos’ feeling. When asked about personal growth, 97 percent said studying abroad served as a catalyst for increased maturity, 96 percent reported increased self-confidence, 89 percent said that it enabled them to tolerate ambiguity, and 95 percent stated that it has had a lasting impact on their world view.

Findings also show that study abroad leads to long-lasting friendships with other U.S. students and still impacts current relationships. More than half the respondents are still in contact with U.S. friends met while studying abroad, and 73 percent said the experience continues to influence the decisions they make in their family life.

Alexa Sand (IES Milan, 1989), who is still very close to U.S. friends she met abroad ten years ago, explains, “I think the shared experience of living fully immersed in another culture made these friendships particularly poignant and enduring.”

Study abroad educators often assert that one of the goals of study abroad is to train future global leaders to be more effective, respectful of other cultures and political and economic systems, and willing to take a stand for the world’s welfare, not just what benefits a specific country. The survey findings indicate that study abroad is succeeding in its mission.

When questioned about intercultural development, 98 percent of respondents said that study abroad helped them to better understand their own cultural values and biases, and 82 percent replied that study abroad contributed to their developing a more sophisticated way of looking at the world.

“The experience of living and studying in another country was so eye-opening … [it] tested preconceptions and habits I wasn’t even aware were so ingrained in me,” says Cynthia Perras (IES Paris, 1981).

It is significant to note that these intercultural benefits are not fleeting but continue to impact participants’ lives long after their time abroad. Almost all of the respondents (94 percent) reported that the experience continues to influence interactions with people from different cultures, and 23 percent still maintain contact with host-country friends. Ninety percent said that the experience influenced them to seek out a greater diversity of friends, and 64 percent said that it also influenced them to explore other cultures.

“It has been nearly ten years since I was a student in Vienna, but not a single day goes by where its impact is not felt in my life,” says Jason Thornberg (IES Vienna, 1994). “My time there fundamentally changed how I view the world and has given me the ability to view the world, and its issues, from several perspectives.”

“My semester [abroad] launched me into a personal and professional involvement with Spain that has already lasted 25 years. A political science lecture in Madrid about U.S. and Spanish involvement in an obscure war in Sahara … led to a graduate fellowship to Spain and North Africa, which led to work as a foreign correspondent based in Spain,” says Gary Abramson (IES Madrid, 1978).

It is noteworthy that the majority of respondents gave academic and professional accounts similar to Abramson’s. When questioned about academic pursuits, 87 percent of respondents said that study abroad influenced subsequent educational experiences, 63 percent said that it influenced their decision to expand or change academic majors, and 64 percent reported that it influenced their decision to attend graduate school. Nearly half of all respondents have engaged in international work or volunteerism since studying abroad.

“An entire range of professional opportunities have opened up to me in recent years, partly due to the skills and internship experiences I gained,” adds Joydeep Sengupta (IES Madrid, 1998).

Similar to Sengupta’s experience, three-quarters of respondents asserted that they acquired skill sets abroad that influenced their career path, and 62 percent said that studying abroad ignited an interest in a career direction pursued after the experience.

Consistent with national study abroad statistics, the survey found that students are generally studying abroad for a shorter duration, with the number of full-year students declining dramatically. In the 1950s and 1960s, 72 percent of respondents studied for a full year, but only 20 percent of respondents did so in the 1990s. The number of students studying for less than 10 weeks tripled from the 1950s and 1960s to the 1990s.

For many years, conventional wisdom in the study abroad field has been that “more is better” — the longer students study abroad, the more significant the academic and cultural development and personal growth benefits. According to survey results, the “more is better” idea holds true. However, results of the study also suggest that programs of at least six weeks in duration can also be enormously successful in producing important academic, inter- and intra-personal, career, and intercultural development outcomes. These findings are significant considering the current national increase in students attending shorter programs. Students attending full-year, semester, and summer programs all report the following benefits: (Please visit www.TransitionsAbroad.com for all statistical charts.)

Although all students benefit from the study abroad experience, there are a few choices that students can make that have the potential to increase their long-term language and career benefits.

Continued language usage was greatest among respondents who lived in a homestay, with 42 percent saying they now use a language other than English on a regular basis. Students who lived in an apartment or a residence hall with local students reported results slightly lower than homestay participants (38 and 32 percent respectively). However, the results of those who lived in an apartment with other U.S. students lagged far behind the rest, with only 18 percent reporting that they use a foreign language on a regular basis.

For students who hope to gain the most career impact from study abroad, results indicate that they should choose an internship as part of their curriculum. Remarkably, 70 percent of intern respondents reported that study abroad ignited interest in a career direction pursued after the experience, compared to 60 percent of non-intern respondents. In addition, 83 percent said that it allowed them to acquire skill sets that influenced their career path, compared to 75 percent who did not intern.

A Lifetime of Benefits

Few other experiences in life have proven to net such a positive and sustainable impact. With study abroad offering so many life-changing and enduring academic, career, intercultural, personal, and social benefits, students should carefully consider studying abroad when searching for a college and during their collegiate career. Students should question potential colleges about the study abroad programs they offer and find out how competitive the application process is and if grades and financial aid transfer. In addition, colleges, parents, and employers should encourage and enable students to study abroad.

As Michael Preziosi (IES Madrid, 1978) says, “My wife and I feel so strongly about the value of this experience that we have told our two daughters that a semester abroad while at college is an absolute requirement for each of them. It is not an experience to be missed.”

Please visit www.TransitionsAbroad.com for a complete copy of this article with the accompanying statistical charts.

MARY M. DWYER, Ph.D. is the president of IES), a national academic consortium with over 155 member colleges that has provided students with high-quality study abroad experiences for more than 53 years.

The Benefits of Study Abroad. (2016, Oct 04). Retrieved from http://studymoose.com/the-benefits-of-study-abroad-essay 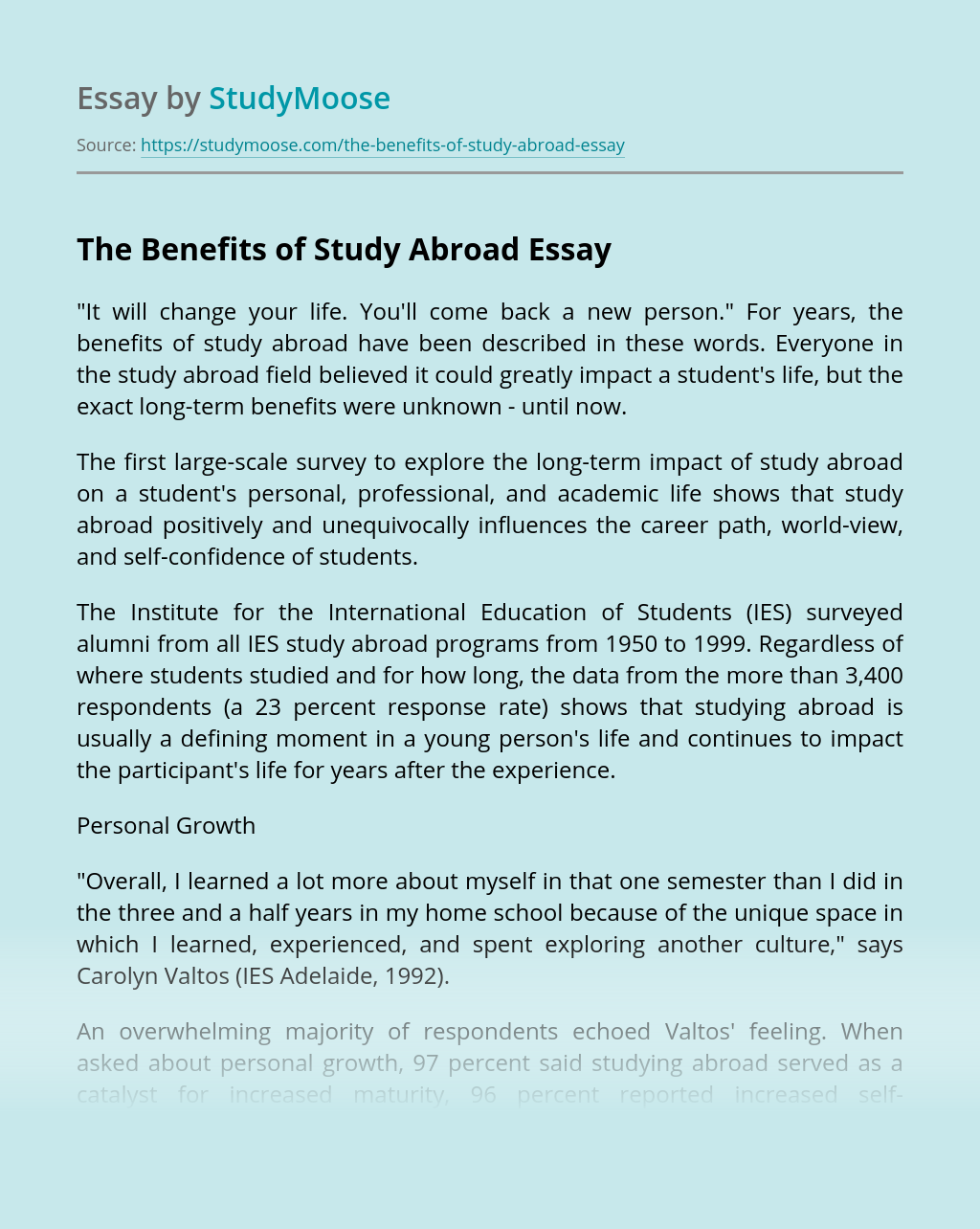 Don’t waste time
Get a verified writer to help you with The Benefits of Study Abroad
Hire verified writer
$35.80 for a 2-page paper
Stay Safe, Stay Original