The Benefits of Conflict Resolution Skills for Police Officers

Police officers have a crucial role in society to serve and protect. The mere presence of a police officer is enough to get an average citizen’s heart pumping. With such a crucial role in society, it is essential that police officers have the correct background and training to carry out their jobs. To apply as a police officer for the RCMP, you must possess a Canadian Secondary School (high school) diploma or equivalent. It has been increasingly more difficult to obtain a career without a degree in post secondary, especially in the criminology department.

Don't use plagiarized sources. Get your custom essay on
“ The Benefits of Conflict Resolution Skills for Police Officers ”
Get custom paper
NEW! smart matching with writer

So why is it that the RCMP does not require their applicants to have any post-secondary education that could be beneficial? Universities offer numerous courses that students can apply in criminology degrees such as policing. For example, CRIM 1215 Interpersonal and Professional Development in Criminology which is offered at Kwantlen Polytechnic University. These types of courses strengthen students abilities to communicate, problem solve and de-escalate situations. After conducting this research, we will be able to better answer the question of if courses such as CRIM 1215 Interpersonal and Professional Development in Criminology will help better equip police officers with conflict resolution skills and more, leading to a better performance than those that have not completed this course.

This study is important because it will help police departments better understand what requirements to put in place for police officers. Police officers deal with vulnerable people on a daily basis, and being able to de escalate situations is an essential skill to have.

The university courses that the research will be focusing on all have to do with effective communication, ethical decision making, de escalation etc. All these skills are important for a police officer to have especially when they are around vulnerable people. For the students that are taking such courses in Criminology currently, they will be able to understand how and if these courses will help them in their career. The research will also help professors of these courses, to see if the material they teach is effective or not.

There has been research done on related topics, but there are still gaps to fill which can be done through this study. Firstly, taking a look at police officers and their perceptions on formal education. With a research study done by Susan Hilal, James Densley and Ruohui Zhao in 2013, we can conclude that the majority of police officers believe that a four-year degree should not be required for their career. However, they also believe that if the requirement of a degree was in place, they would be willing to do so. This is quite interesting because the police officers from this study believe that the 4 years of education would not be beneficial towards their career. (Hilal, Densley, Zhao, 2013). But, this study does not answer questions about the specific conflict resolution and interpersonal skills and how those can or cannot benefit police officers.

In another study conducted by Philip E. Carlan and John A. Lewis in 2009, they found that officers with at least a bachelor’s degree reported to have a lot more commitment to their job and police department. From that study, we can conclude that police officers with any amount of education are more likely to be devoted about their careers (Carlan, Lewis, 2009).

In a study done by Jason Rydberg and William Terrill in 2010, it was shown that police officers with a degree are less likely to use force than those without a degree. The research gives us some insight on how police officers that are educated differentiate from those that arent but the research does not clarify how specific conflict resolution classes benefit police officers.

This study will answer if police officers that have taken university courses that teach interpersonal skills and conflict resolution perform better at dealing with vulnerable people than those that haven’t taken these courses. The outcome of this study will likely be that the police officers that have taken courses on interpersonal and conflict resolution will be better at their jobs than those that have not. For example, the course description of interpersonal and professional development in criminology outlines that students will be learning about “interpersonal communication, including effective listening, empathic engagement, appropriate self-disclosure, ethical decision making, teambuilding, advocacy skills, and interviewing techniques.” (KPU) This study is original because there is not any research on how these courses specifically benefit police officers and the people they interact with. The course example that is used is offered at Kwantlen Polytechnic University. However, courses related to communication, problem-solving and de escalation are offered at many post-secondary institutions. This research will be looking at the direct correlation of a police officer’s skills with these specific courses. Based on the research that has been done and reviewed, police officers with any post secondary education are less likely to use force on the public than those without a degree (Rydberd, Terrill, 2010).

With any kind of field research comes the possibility of ethical or legal issues that could arise. Researchers will take all necessary steps in order to prevent any issues from occurring and ensure that the data is not biased in any way. There could be a concern with using vulnerable people as subjects for research (Fouka, Marianna). To ensure no harm is done to them, they will be kept anonymous throughout the research and there will be no steps taken to intervene in the research. For example, the researcher will not try to get the police officer to approach the vulnerable person to see how they would deal with them. Instead, it will just be observing the police officer.

When conducted, this research will greatly benefit police officers and police departments in doing their job to the best of their ability.

The Benefits of Conflict Resolution Skills for Police Officers. (2021, Aug 06). Retrieved from https://studymoose.com/the-benefits-of-conflict-resolution-skills-for-police-officers-essay 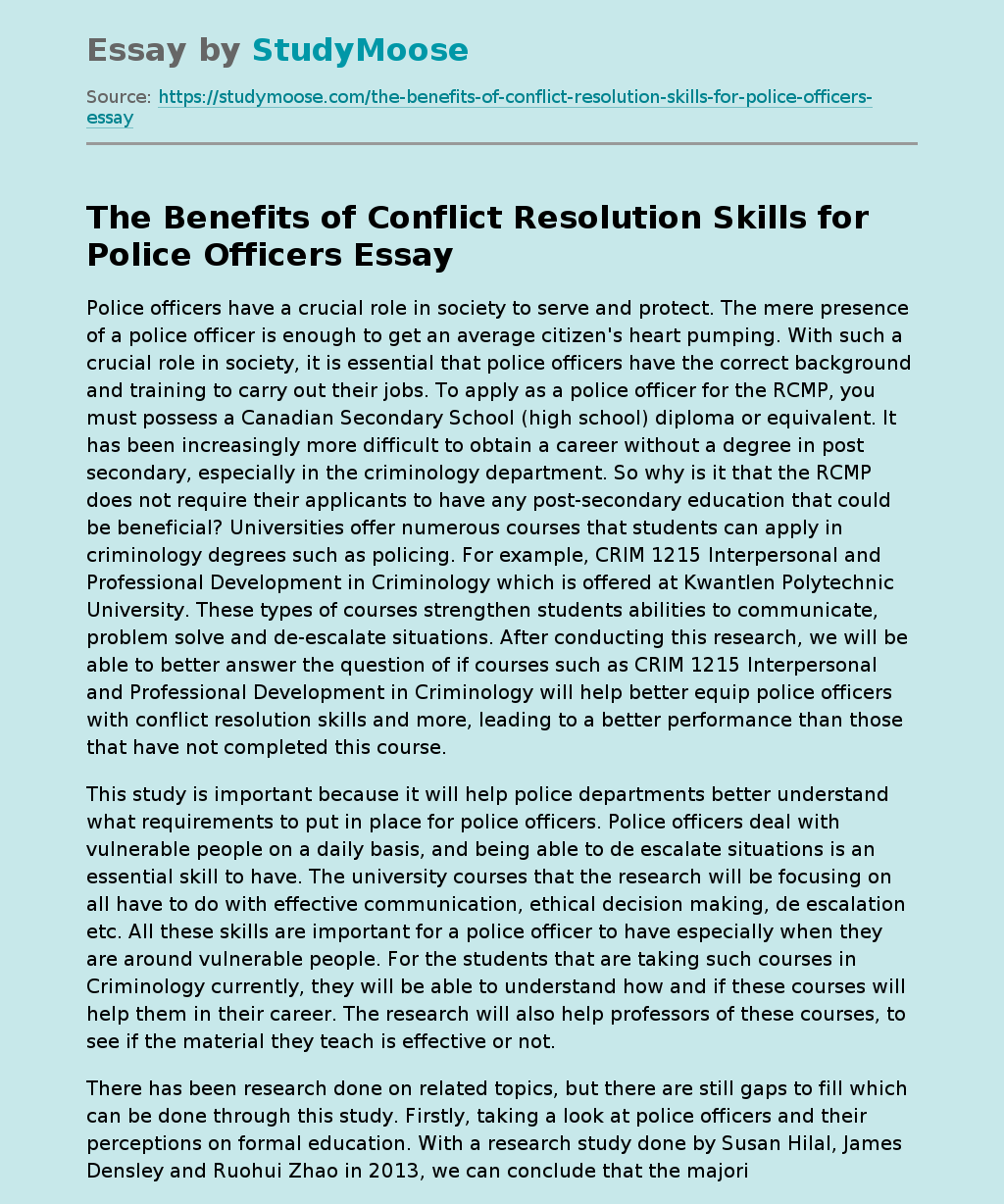