The Art of Japanese Food

A Hindu saying goes “a man is what he eats. Not only is his bodily substance created out of food, but so is his moral disposition” (Ohnuki-Tierney 3). Indeed, food has no longer been considered as a means to acquire energy and fuel for the body. Many anthropologists, sociologists and historians have begun to view food as a reflection of one’s culture. This is because the preparation, cooking, presentation and even the manner how the food is eaten is embedded in culture.

Turn in your highest-quality paper
Get a qualified writer to help you with
“ The Art of Japanese Food ”
Get high-quality paper
NEW! AI matching with writer

This is nowhere more evident that in Japanese cuisine.

If you would compare an exquisitely prepared entree of Japanese food to a flower arrangement handcrafted by a Japanese florist, there are so many similarities that you would be able to decipher between these two seemingly unrelated objects. In order to understand why Japanese food is considered both as a work of art and an exemplification of the culture of the cook that had prepared the dish, one must first understand a little bit about Japan’s culture and Japan in general.

Firstly, the country is one that has been known to be a land of minimal resources.

As such, the Japanese have become very limited to their selection of dishes. The geography has been considered to be one of lush valleys, misty mountains and open sea. It is for this reason that authentic Japanese food would always be comprised of fish, rice and vegetables. As such each of these dishes represent a little bit of the entire geography of Japan (Ashkenazi and Jacob 2-4; Allison 197), with each bite allowing you to commune with the treasures the land of the country has to offer.

Another thing that is noticeable with Japanese food, particularly with the various sushi dishes is it being extremely colorful.

A perfect example of this is seen in the humble bite-sized California rolls. The rosy colored prawn represents summer. The cucumber, seaweed and wasabi paste represent spring. Steamed rice represents the season of winter and the flying fish roe used for garnish is for autumn. The representation of Japanese food does not end with just merely representing a little bit about the country’s seasons, landscape or the kinds of produce available to the Japanese people. It is a representation of the religion and the way of life practiced by the Japanese based on their beliefs of Shinto and Buddhism.

Popular knowledge has considered as a religious belief practice by the Japanese which focused on the communion with nature. Looking deeper, Shinto has become the way of life practiced by Japanese since during the ancient times so much so that it was become the basis of the code of Bushido. One of the practices that the religion of Shinto mandated was simplicity. This is clearly defined in everything and anything that has been associated with the Japanese, particularly when it came to food. Unlike other Asian cuisines which utilize various spices in their cooking, Japanese cuisine hardly uses any spices in its cooking.

It is for this reason that as compared to other Asian cuisine, Japanese food may often taste slightly bland and extremely light. This is to ensure that when one consumes a meal, it would be a chance to experience the flavors of the various foods being consumed down to its basics (Ashkenazi and Jacob 18-19). Chan Buddhism, also known as Zen Buddhism, on the other hand, is based on the belief and philosophy that in order for an individual to experience enlightenment, one would have to go through a number of layers in order for that individual not to follow worldly ways (Graham 85).

It is for this reason that unlike other cuisines and dining practices that is practiced anywhere else in the world, a person that experiences a traditional Japanese meal would be served one meal at a time, allowing you to savor and enjoy the meal before the next one is brought out. Not only does it symbolize the teachings of Zen Buddhism with regards to the different layers that one must undergo in order to reach enlightenment but to also provide the individual to slowly make his or her way through the various combinations of unadulterated flavors exhibited by each dish ( Graham 80)

Another teaching of Zen Buddhism has its roots as well in Confucianism. This teaching requires the presence of discipline in all of the Japanese individual’s activities. The ultimate goal is to strive for perfection. In order to do so, the philosophy of Zen required long hours of training in order to master a particular art, whether the art is in the preparation of food or practicing the way of the sword, as in the case for the samurai. This is perfectly exemplified through the simple yet elegant tea ceremony practiced in Japan.

Unlike tea ceremonies that are practiced in other parts of Asia, the Japanese tea ceremony requires the tea person performing the act to prepare the tea in a very calculated manner down to the very last detail while still appearing to be graceful and fluid (Graham 90-93). All in all, the tradition and culture of the Japanese is simple at the same time complex. It is composed of a number of separate and various elements, which on its own is a piece of art in itself.

When brought together, these various heterogeneous aspects of Japanese culture would create a whole new masterpiece creating a whole separate work of art on its own (Graham 79). It is no surprise then as to why Japanese have been able to hold on to their traditions, cultures and beliefs despite the massive onslaught of Western cultures that have slowly made its way to the Land of the Rising Sun. Through their art, architecture, flower arrangements and in their food, they proudly impart not just their craft, but a part of themselves.

So, the next time that you and your friends are heading out for a night on the town and you happen to decide to grab a bite to eat at the Japanese restaurant around the corner, do not just order your food and gulp it down hurriedly. Take your time to observe and savor this wonderful edible work of art presented to you and your friends for it is not just a meal that you are taking in your body. Rather, it is a short moment for you to commune with the Japanese chef’s country, its seasons, their philosophies and their beliefs, which have made their culture and traditions uniquely their very own.

The Art of Japanese Food. (2016, Aug 26). Retrieved from https://studymoose.com/the-art-of-japanese-food-essay 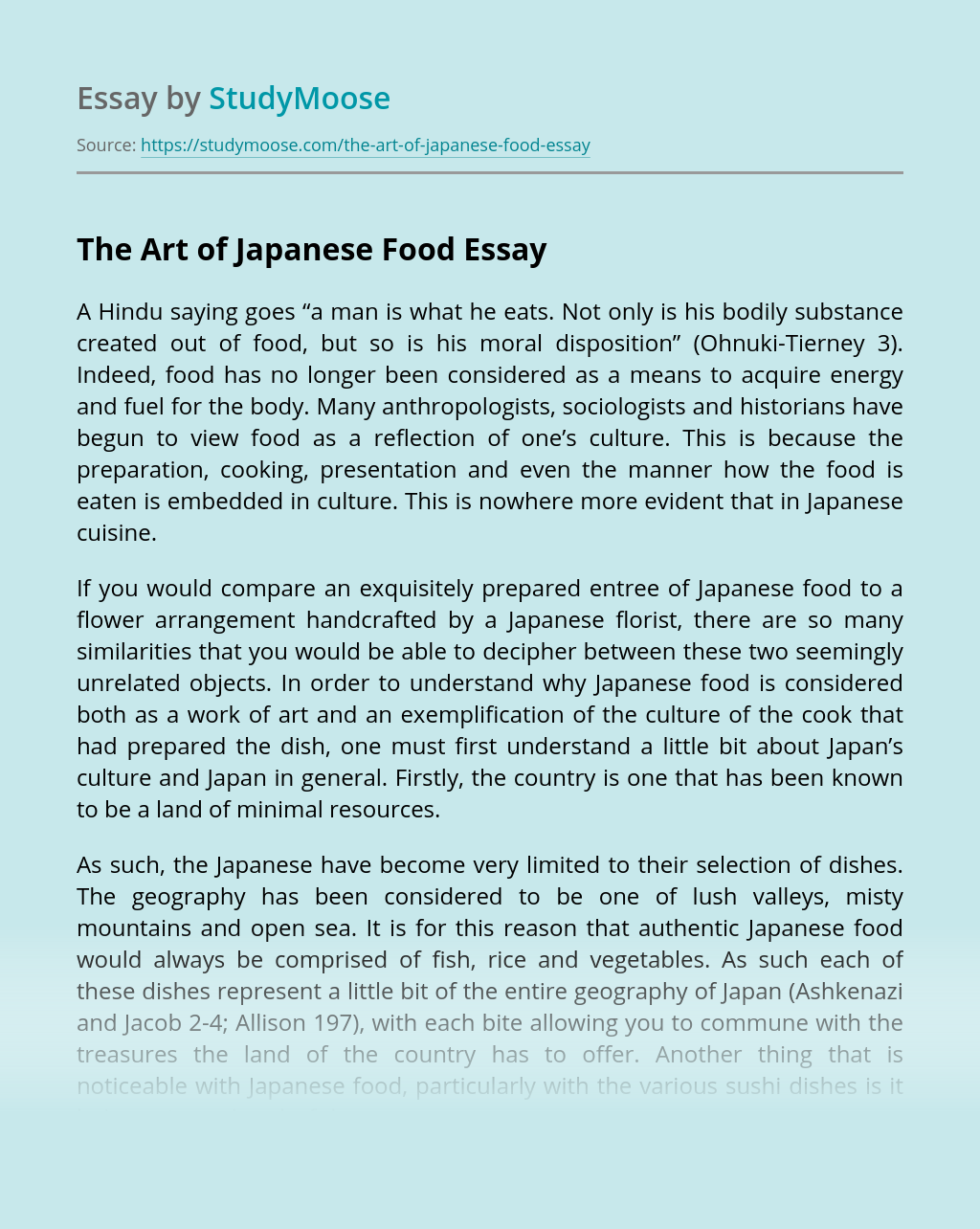 Turn in your highest-quality paper
Get a qualified writer to help you with
“ The Art of Japanese Food ”
Get high-quality paper
Helping students since 2015
Stay Safe, Stay Original