The Application of Operant Conditioning Techniques in a Secondary Classroom

The Application Of Operant Conditioning Techniques In A Secondary Classroom Background A plethora of Studies have reported the effectiveness of operant conditioning techniques in altering the behavior of children in a number of different situations. There has been many studies in which teacher-supplied consequences have had effects on preschool and elementary school children in a regular classroom, but almost none in the secondary schooling classrooms. The results of these studies were that in smaller classrooms, students’ behavior improved with consequences given by the teacher.

Don't use plagiarized sources. Get your custom essay on
“ The Application of Operant Conditioning Techniques in a Secondary Classroom ”
Get custom paper
NEW! smart matching with writer

McAllister, Stachowiak, Baer, and Conderman now take a look at the effects of these consequences on a larger scale. This study sought to take an entire class of secondary school students and apply teacher-supplied consequences for misbehavior to discover if the behavior of the students improved. Methods The subjects consisted of 51 students ranging in age from 16-19 years, who all had similar I. Q. s and economic backgrounds. The experimental group consisted of 25 students (12 boys and 13 girls), Where as the control group consisted of 26 students (13 boys and 13 girls).

Also, The experimental class was 70 minutes long and the control class was 60 minutes long. The teacher was a 23-year-old female who held a bachelors degree in education. She had one year’s experience in teaching secondary level English. The basic design of the experiment was a pretest-posttest control group design combined with the use of a multiple baseline technique in the experimental class. The behaviors chosen to be targeted were Inappropriate talking and turning around due to the fact that these behaviors had a high rate of occurrence.

Inappropriate talking was classified as any vocal behavior portrayed by a student without the teacher’s permission. Also, any vocal behavior required that the student raise his or her hand before speaking, unless engaged in a group discussion. Inappropriate turning around was classified as any turning-around behavior in which the student turned more than 90 degrees away from the front of the room. An exception to this was when a student was required to turn around to distribute papers to their classmates as directed by the teacher.

The observations were recorded for the experimental class using a sequentially numbered, 70-box table for each behavior. The observations of the control class were recorded using a similar, 60-box table. If either of the target behaviors occurred during any minute interval of time, it was recorded by placing a check mark in the corresponding box for that interval. Any further occurrences of the target behavior during the same time interval were not recorded. Thus, each time interval represented whether or not the behavior had occurred during the time interval opposed to the number of occurrences.

The Application of Operant Conditioning Techniques in a Secondary Classroom. (2018, May 26). Retrieved from https://studymoose.com/the-application-of-operant-conditioning-techniques-in-a-secondary-classroom-essay 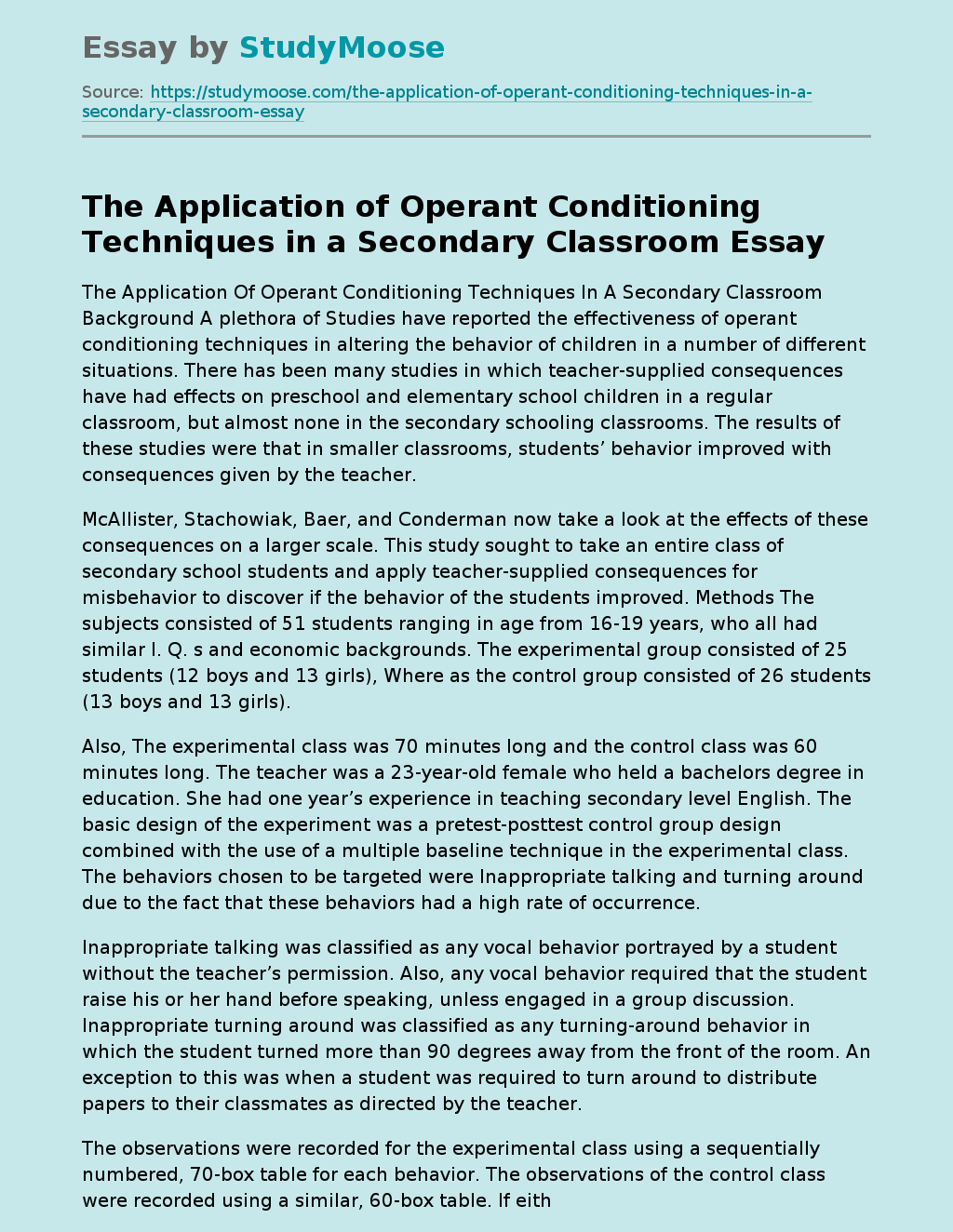