The Theory of Operant Conditioning

The study of human behavior by psychologists such as B.F. Skinner, Edward Thorndike, Ivan Pavlov, and Watson is fascinating. These five psychologists each have different theories on human behavior. There are similarities and differences in each of the theories. Ivan Pavlov’s classical conditioning theory, studied animals and formed the basis for behavioral psychology (Cherry, 2013). Edward Thorndike’s theory of connectionism consisted of studying the learning process of behavior in animals. His studies also included problem solving, administering and evaluating tests and law of effect, the bases for Operant Conditioning.

Turn in your highest-quality paper
Get a qualified writer to help you with
“ The Theory of Operant Conditioning ”
Get high-quality paper
NEW! AI matching with writers

Operant conditioning used today to modify behaviors in humans from childhood to adults even though the theory created by B.F. Skinner originated in the 1940’s.

The theory of operant conditioning

The theory of operant conditioning began in the 1940’s and based on neutral operants, reinforcers, and punishers. B.F. Skinner’s theory of operant conditioning summarized behavior, is modified through reinforcement obtaining a desired result. B.F. Skinner observed three types of responses from reinforcers. Neutral operants are neutral responses, neither positive nor negative. These responses do not indicate that a repeat of a behavior will increase or decrease.

Skinner’s designed a box called the Skinner box for his studies. The Skinner box is designed to observe, study, and modify the behavior of lab rats using his theory of operant conditioning. Skinner placed the rat in the box with a lever at one end. The rat was subject to electric shock and the lever in the box turned the electric current on and off. The rats discovered that by moving the switch the electric current stopped. The rats also discovered that when light was turned on the electric current would be turned on as well. The rats learned to move the switch the moment the light came on therefore eliminating shock from electrical current (Mcleod, 2007). “Operant behavior is behavior “controlled” by its consequences. In practice, operant conditioning is the study of reversible behavior maintained by reinforcement schedules” (Staddon & Cerutti, 2003, para. 1).

The theory of operant conditioning consists of negative and positive reinforcements. B.F. Skinner used these two types of reinforcements in his studies to obtain a desired result in behavior. While both types of reinforcers are designed and effective in modifying behaviors in individuals, one is considered more effective. Negative reinforcers are used to strengthen a behavior by the removal of an unpleasant or adverse stimulus. Negative reinforcers are not negative and designed to strengthen a behavior not to punish a behavior. A positive reinforcer strengthens a repeat in behavior by providing a consequence that is rewarding to increase the repeat of a behavior (Mcleod, 2007). Skinner (2011), “It has long been known that behavior is affected by its consequences. We reward and punish people, for example, so that they will behave in different ways” (para.1). Effective Reinforcement

Although psychologists Edward Thorndike, Ivan Pavlov, and Watson have theories, it is Burrhus Frederick Skinner’s theory of Operant Conditioning that is most effective. B.F. Skinner’s studies of modifying the behavior of lab rats and his use of reinforcers have shown how behavior can be changed. Skinner used positive and negative reinforcers, neutral operants, and punishers, in his studies and observations. Even though the beginnings of operant conditioning originated in the 1940s it is still used to modify behavior today. Operant conditioning can be applied to everyday life such as in the examples of the individual driving to and from work. Or the individual the habitually drives under the influence of alcohol. Skinner (2011), “Responding because behavior has had reinforcing consequences is very different from responding by taking advice, following rules, or obeying laws” (para. 9).

The Theory of Operant Conditioning. (2016, May 07). Retrieved from http://studymoose.com/the-theory-of-operant-conditioning-essay 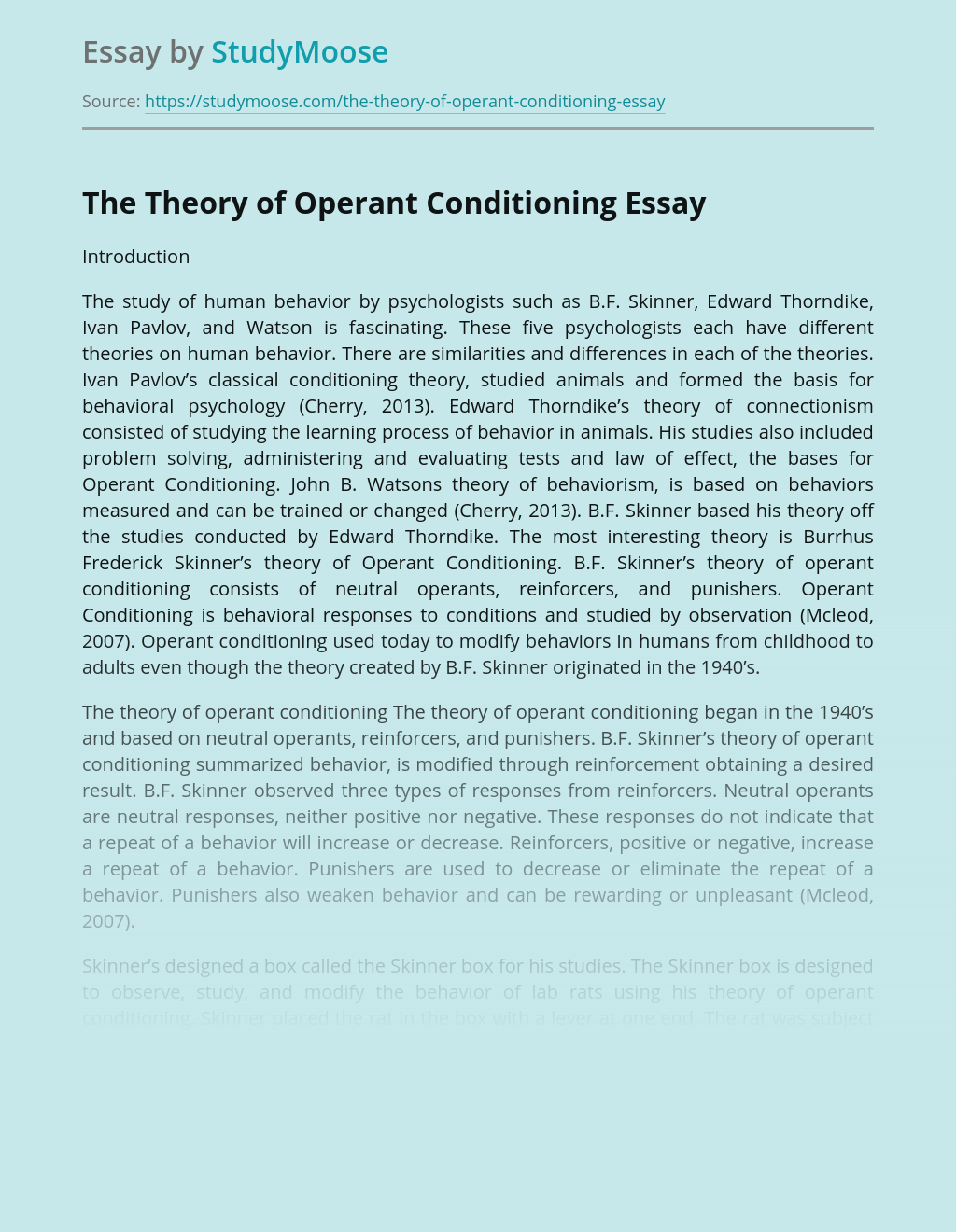 Turn in your highest-quality paper
Get a qualified writer to help you with
“ The Theory of Operant Conditioning ”
Get high-quality paper
Helping students since 2015
Stay Safe, Stay Original