The American Novelist, John Updike was accomplished poet, writer, and critic. (The Editors of Encyclopaedia Britannica) He had won many awards for his excellence in writing. John had a great childhood, an outstanding education, and an impressive career in literature. He once said, “Rain is grace; rain is the sky descending to the earth; without rain, there would be no life.” (John Updike).

John Updike had a great childhood. He was born March 18, 1932 in Reading, Pennsylvania.(The Editors of Encyclopaedia Britannica) He was raised by his parents, in which his mother supported him to write.

Don't use plagiarized sources. Get your custom essay on
“ John Updike ”
Get custom paper
NEW! smart matching with writer

John was an only child and live with his grandparents and his parents.(John Updike) His childhood town was Shillington, Pennsylvania.(The Editors of Encyclopaedia Britannica) He attended Shillington High School and later become president of his class and Co-Valedictorian. After high school, he spent his time working for The Reading Eagle. During this time, he earned himself a scholarship to Harvard University.

At Harvard, he wrote for the campus magazine, Harvard Lampoon, and later become president of the magazine.

He married his girlfriend in college and afterwards graduated from Harvard. After Harvard, he started his writing career and become extremely successful. John and his wife, Mary E. Pennington spent time in England and later returned to the United States.(John Updike) They went to Manhattan and later to Ipswich, Massachusetts because his family was growing. John had four children, Miranda, Michael, David, and Elizabeth Updike. In 1974, Updike and his wife got divorced. He remarried a woman named Martha Ruggles Bernhard two years after the divorce.

His final home was Beverly Farms, Massachusetts. In the later months of 2008, he was diagnosed with lung cancer. He died January 27, 2009 at the age of seventy-six.(A Storied Life.)

John Updike’s education was excellent. He was a hard worker and excelled in high school. He graduated Shillington High School as Co-Valedictorian. John spent some time off school and worked for a newspaper organization and was offered a scholarship to Harvard University. His major was English. He moved to England and studied at Oxford’s Ruskin School of Drawing and Fine Art. After he returned to the United States, he started writing for The New Yorker. After he started writing, his career flourished. (John Updike.)

John Updike’s career was an accomplished one. He won many awards and gained notoriety all around America. He was a fiction writer and wrote many poems, short stories, and novels. Some of his first works were The Poorhouse Fair and The Carpentered Hen and Other Tame Creatures. His more renowned works are Rabbit, Run, The Centaur, and Rabbit at Rest. He won the Pulitzer Prize for Fiction twice, something that only two other writers had done. In 1989, Updike was awarded the National Medal of Art from President George H.W. Bush. Later in 2003, he was also given the National Medal for the Humanities from President George W. Bush. In the same year, Updike published a collection of his early stories named The Early Stories, 1953-1975. (John Updike.) In the article John Updike Jefferson Lecture it says how people saw him and the long lasting effects of his works:

He is known to many first as an author of short stories, with dozens having graced the pages of the New Yorker before being published in collections. Many other readers know his shorter fiction either through the O. Henry Prize Stories or anthologies of American literature, where they would have entered into the at times sad, at times triumphant thoughts of, say, a certain check-out clerk at the local grocery store; A&P serving as a model of dramatic irony for at least two generations of English literature teachers.

This article is a perfect example on how impactful Updike’s stories were. He was also a great critic of literature. He won the National Book Critics Circle Award for Fiction two times and wrote essays on his criticism. (John Updike Jefferson Lecture) Updike was also a fantastic poet. He worked on a many poems but only published a few himself. The other poems were published posthumously. Most of the poems published after his death have a central subject which was his own death. (The Editors of Encyclopaedia Britannica)

John Hoyer Updike was an outstanding novelist, poet, writer, and critic. He had acquired many awards for his works and was a famous author. His works are still used today and will keep being used for many years to come. His childhood was great which lead him into becoming a great author. He had an excellent education by studying at Harvard and later became a distinguished writer. In his life he won countless awards and was cherished by many. (The Editors of Encyclopaedia Britannica) He once said “Creativity is merely a plus name for regular activity. Any activity becomes creative when the doer cares about doing it right, or better.” (John Updike) 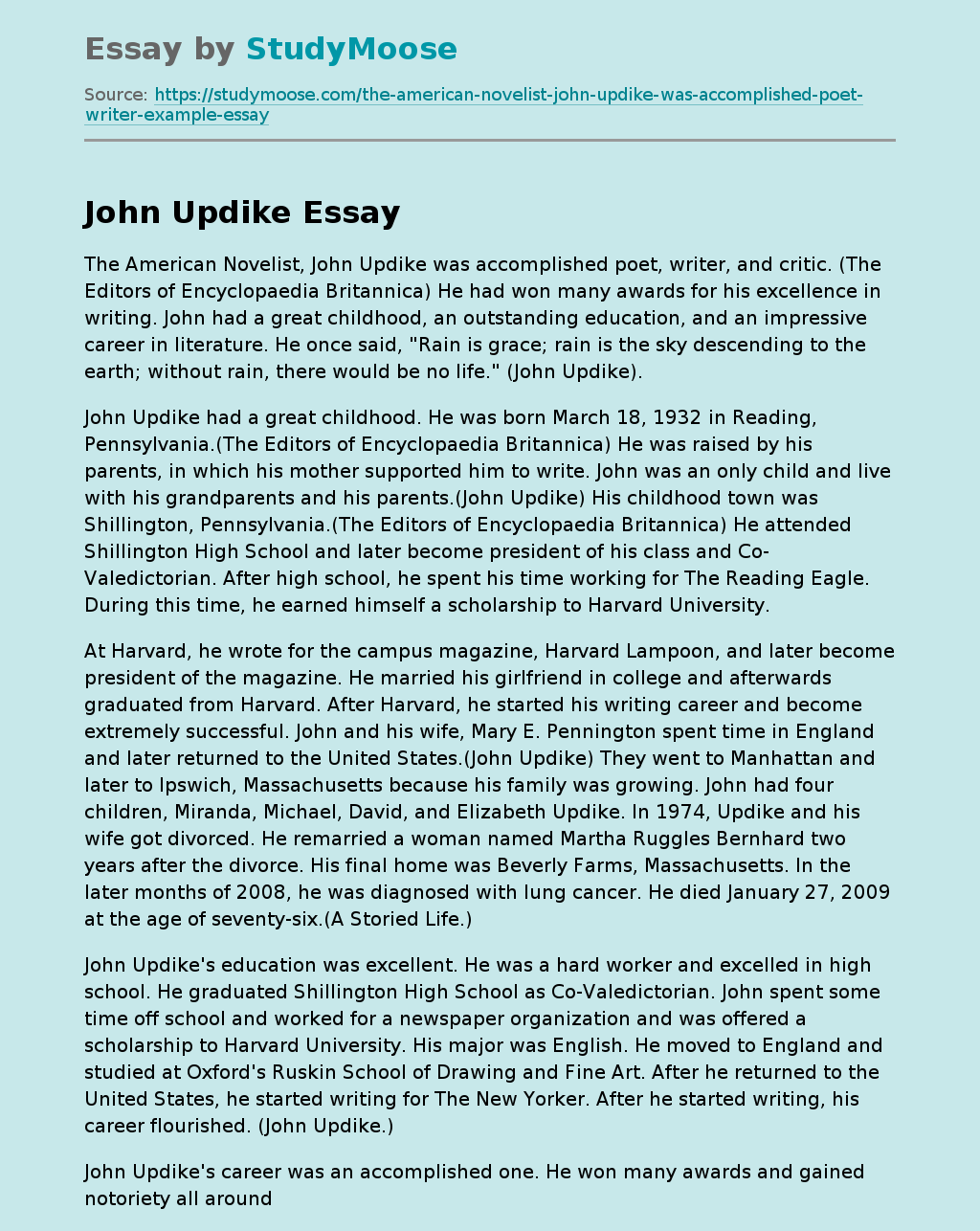